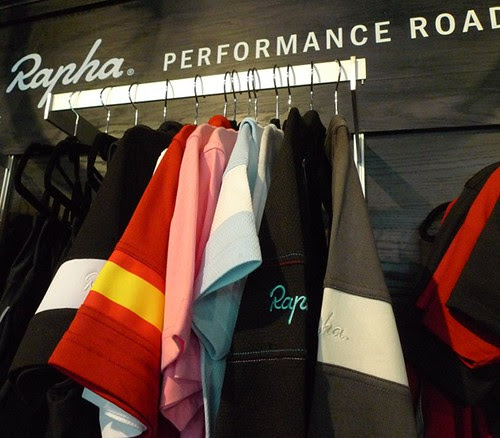 Rapha is one of those companies that people tend to either love, or love to hate. Essentially a manufacturer of high-end cycling clothing, but also a magazine publisher, racing sponsor,  event organiser, bicycle design collaborator, and general "lifestyle brand," Rapha promotes an unapologetically romantic vision of roadcycling via an endless output of dreamy images as part of its advertising and social media campaigns. Slender, beautifully backlit cyclists suffer exquisitely as they scale mountains - often in black and white, and often to the accompaniment of haunting music, fostering a sense of nostalgia for a time that is not yet in the past. The garments offered are minimalist and expensive. That is Rapha in a nutshell. 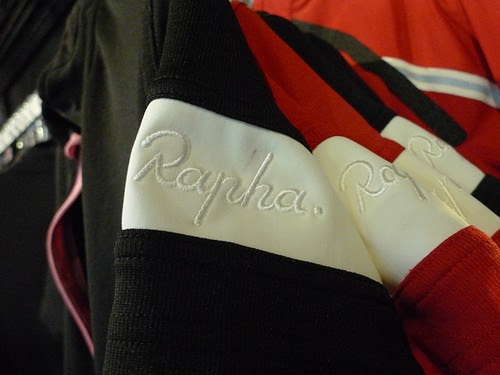 Now, let me make it clear that I have nothing against Rapha's marketing tactics. I appreciate an effective advertising campaign achieved through emotional channels, and for this they surely deserve an award. When something inspires such excellent parody, you know it's reached iconic status. I also have nothing against brands that are considered luxury or high end, if the quality of their products reflects the price. So what's my problem with Rapha? It's not so much a problem, as a genuine feeling of dissonance - at least when it comes to the women's line. When I encounter their clothing in person, what's in front of me does not match the image cultivated by the impressive adverts. 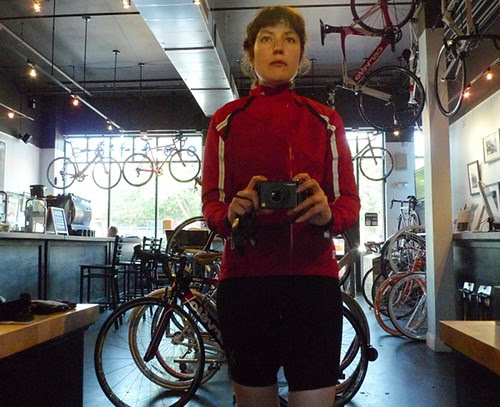 Take, for instance, the Women's Stowaway Jacket. Last summer I was desperate for a cycling rain jacket after my old windbreaker came apart. I wanted the jacket to be form-fitting, waterproof, and, ideally, red. Having exhausted the less pricey alternatives, I followed up on a suggestion to try Rapha. The Stowaway happened to be on sale at the Ride Studio Cafe at the time, and I came prepared to buy it. I tried on the jacket. It wasn't bad. I mean, not horrendous. Basically, it looked like a tracksuit top circa 1982 - something you'd expect to see on, say, an East German gymnast of that era. It's an intriguing look if you can pull that sort of thing off, but not especially flattering. The shade of red also strikes me as uninspired: not an exciting bright red and not a classic vintagey-brick either, but a dated crimson that I do not readily associate with cycling. 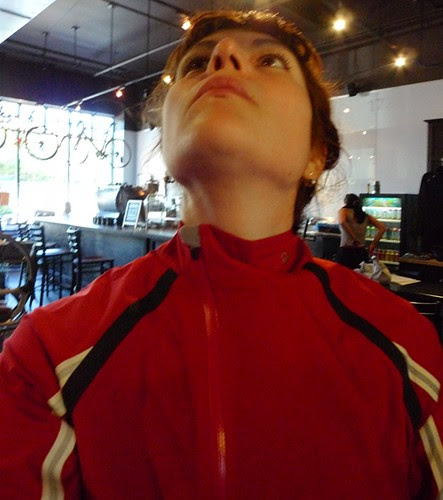 True to '80s tracksuits styling, the fit is tight in the chest, but mysteriously baggy above the chest - forming strange folds at the collar that threatened to constrict my breathing. 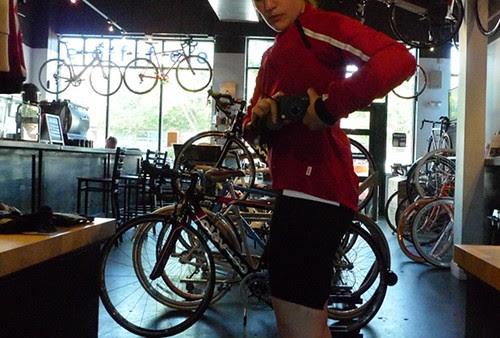 And do you see that bulge in the back? You're probably thinking that's the rear pockets. Nope. This cycling jacket has no rear pockets; that's just a bulge that forms on its own. 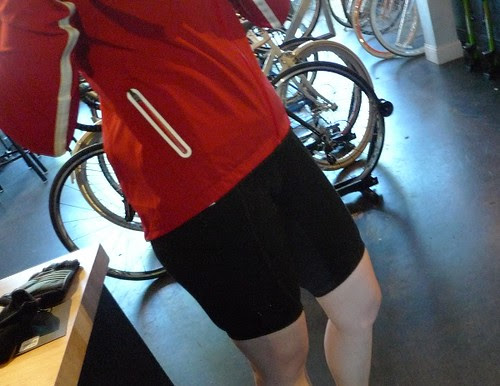 Although there are side pockets, they are small - so small, that I had trouble sticking my hands inside. Mind you, none of these design flaws are at all unusual in the sadistic world of women's cycling apparel, and if anything Rapha is not as bad as some of the alternatives. But for me, that is just not good enough given what I was made to expect. 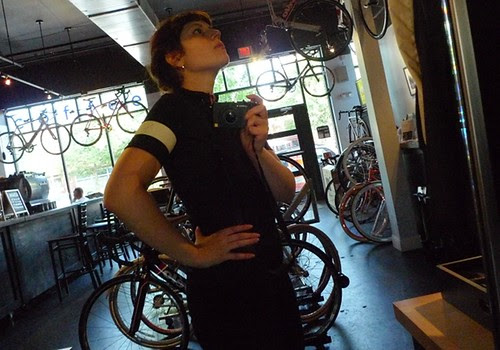 Moving on to the Classic Women's Jersey - which I had considered when looking for wool cycling clothing: The styling in itself is all right, except that the full-length zipper creates artificial "tummy folds," as is common with this type of jersey. 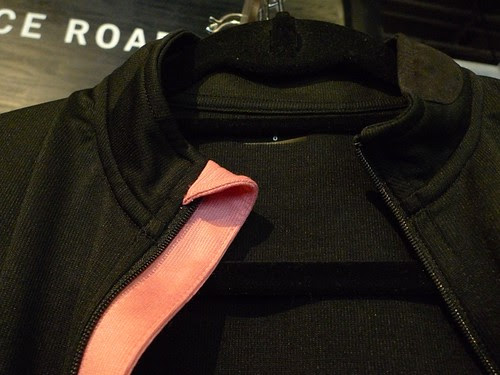 The fabric is described as "sportwool," but as soon as I put it on, it became clear that this was a euphemism for a polyester-heavy blend. I later checked and yup: "sportwool" is 60% polyester. 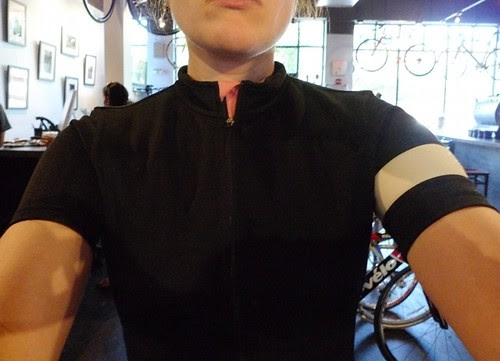 Though the minimalist design is tasteful and subtle, I would rate the texture of the fabric as average on the rough vs silky scale. And for a hot weather jersey, it seemed somewhat heavy to me. 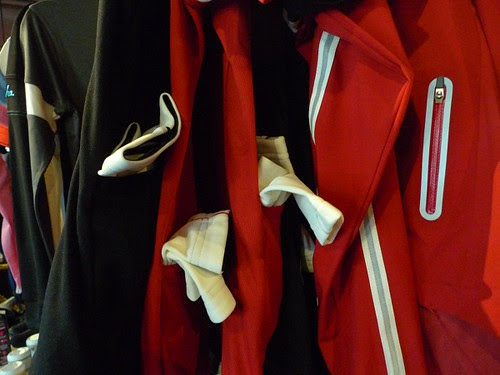 One nice thing about the Rapha jerseys, is that they come with arm warmers. Problem is (and I am not the only one to have noted this), that the arm warmers seem to be one size smaller than the jersey - rendering them essentially useless for those whose arms are not stick-thin. Too bad, because including matching arm warmers is a wonderful idea. 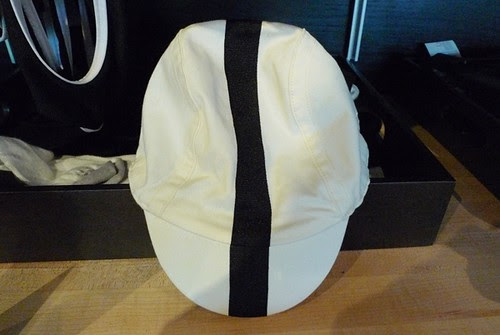 I could go on about other items in the Rapha women's line, but that's probably enough for now. Suffice to say that I find all of it more or less all right, but by no means extraordinary either in quality or looks. I am supportive of what Rapha is trying to do - create inspiring, classic, tasteful, well made cycling clothing. We can certainly use more brands that create such clothing for female cyclists, so really, I am all for it.  But come on Rapha: Live up to your image. Watching all those dreamy backlit videos, I expected some truly "epic" women's cycling apparel... and this ain't it.
Labels: product reviews