A Look at Berthoud Handlebar Bags and Thoughts on Attachment Options 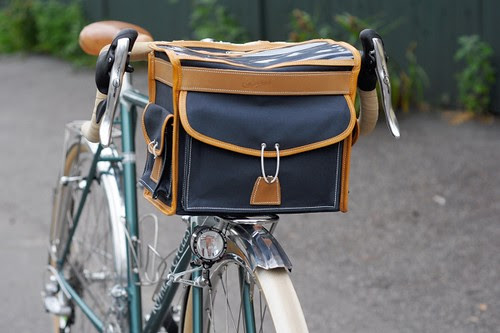 I finally received a Giles Berthoud handlebar bag for the Randonneur. It's the Model 25 in gray, which is their medium size and features elastic ties for the pockets instead of leather straps. 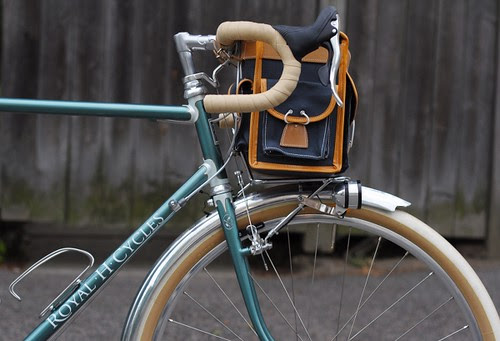 The visual presence of this bag is almost too much for me. There is something about its colour scheme and construction that says "I am French and I am exquisite," and I find this both interesting and intimidating. 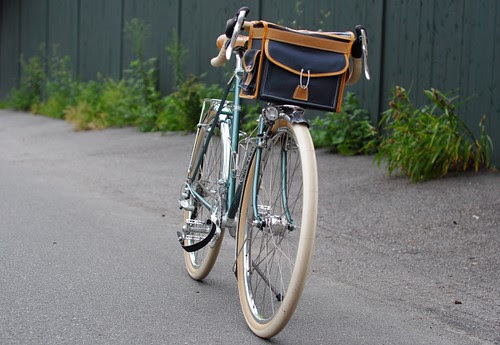 But happily, the Berthoud does not overwhelm the aesthetics of the bicycle. The size is a perfect fit. And the darker fabric and lighter leather combination parallels the contrast between the frame and lugwork. In comparison, the Ostrich handlebar bag on my own bike is more drab and also more bulky. 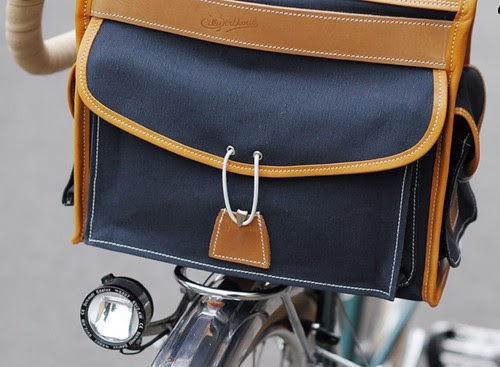 The bag has a large front pocket, 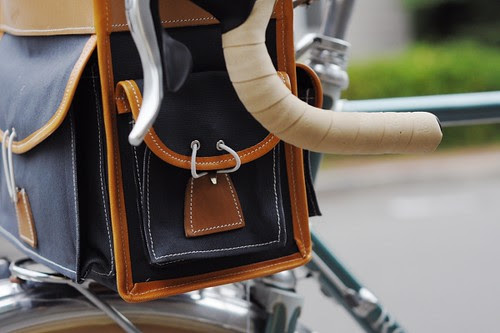 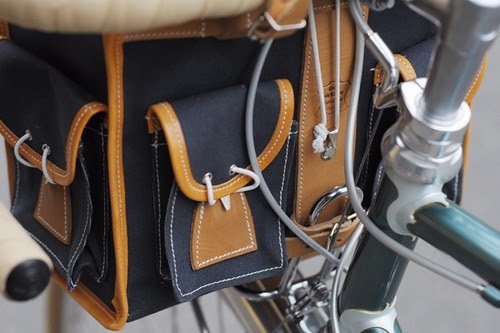 and two rear pockets. The top flap closes toward, rather than away from the cyclist, which is the opposite of what I am used to with the Ostrich and makes it counterintuitive for me to use - but this is of course user-specific. You can see that leather straps are provided for wrapping around the back of the rack. However, there are no provisions for securing the bag to the rack's platform, which surprised me (Ostrich includes straps for this). I know that some devise DIY systems, and if you've done so I'd love to hear about your process. 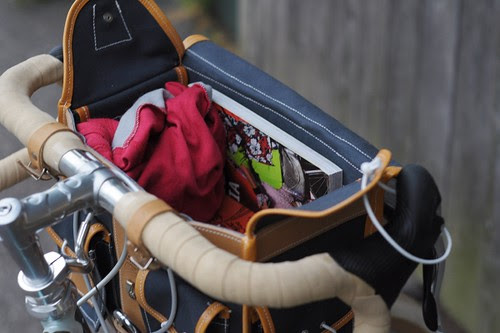 There are leather straps provided for attaching the bag to the handebars, though most opt for installing a decaleur. And here is where we are experiencing a little glitch. Ideally, the owner would prefer to forgo a decaleur: He plans to ride both with and without the bag, and a bagless decaleur sticking out of the bicycle doesn't look great (I agree). The handlebar straps hold the bag up fine, but without being secured on the bottom it bounces on the rack when filled with stuff and going over bumps.  I am also told that the bag can move from side to side without a decaleur, though I haven't experienced this yet during my one test ride so far (with 10lb of weight in the bag). 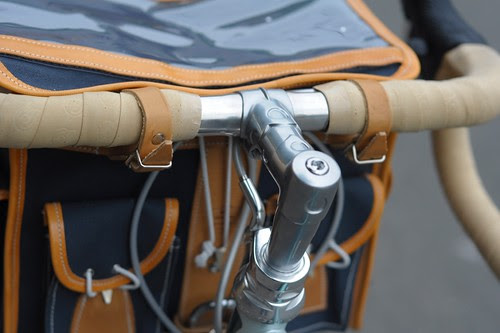 As far as decaleurs go, we had planned to use one of these if going without proved impossible, but I have since been warned that using it with the Nitto lugged stem (as opposed to the regular Technomic stem) is not a good idea, for complicated reasons related to clamp compatibility that I won't go into here.  An alternative would be Berthoud's own decaleur, but it too apparently presents issues with the lugged stem - plus it is fairly obtrusive without the bag on. A headset-mounted decaleur is not possible here, because it would sit too low. So I am seeking a solution, and  also wondering whether securing the bag at the bottom would in itself solve the problem. The bag is not nearly as large as my Ostrich, and I know that some do manage to use it without a decaleur. Sharing of experiences in this regard would be most appreciated.
Labels: bags Randonneur Royal H