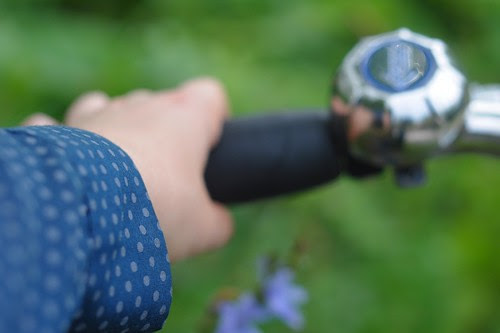 In discussions of a bicycle's ride quality, one thing that always comes up is stability. We want a bike that is stable and we complain when it is not. Of course the problem with "stability" is that the concept is largely dependent on our skill level and cycling background. Those who are unaccustomed to riding roadbikes will often find them unstable at first, while those who ride roadbikes exclusively will often find upright bikes unstable. This does not mean that either is actually unstable, but rather that the two cyclists are used to radically different means of weight distribution. Similarly, what's "unstable" to one cyclist can be "responsive" to another. It seems that perception of stability has at least as much to do with the person riding the bicycle as it does with the bicycle itself. How useful is it, then, to tell a salesperson or a framebuilder that we want a bicycle that is stable? And how useful is that term in reviews? Clearly we need further qualification.
When I talk to new cyclists who are uncomfortable operating their bikes, instability is often cited as the problem: It can make a bicycle difficult or scary to ride, making the cyclist feel not entirely in control. In the process of teasing out what exactly is meant by this elusive concept, I've identified a number of distinct points that I would like to share, and see what others think: 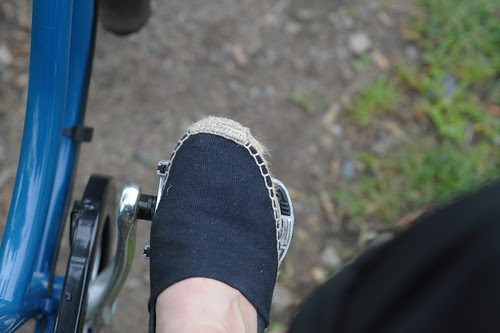 Starting from a stop

Some bicycles are described as shaky when starting from a stop, as if the front wheel is wobbly and wants to turn just as the cyclist is trying to get the bike rolling forward. This is a complaint I hear a lot from women about vintage mixtes that came with dropbars, but have been converted to upright bikes and also, interestingly, about classic Dutch bikes. The feeling is sometimes referred to as "light steering" or a "light front end," and has to do with a complicated combination of the bicycle's geometry and the height of the handlebars. With some bikes, I have found that lowering the handlebars helps - in particular when it comes to the mixte conversions - but ultimately it is a matter of getting used to it. Some cyclists do get used to it, but others can't and feel inherently uncomfortable with the bike.
Cycling at slow speeds
Similar to the above, only extended to cycling at slow speeds: The bike wants to weave (i.e. feels "squirrely" or "twitchy") when the cyclist attempts to ride slowly, making it difficult to control. Aggressive roadbikes are known for this quality, but cyclists report the feeling about some upright bikes as well (albeit often they are upright bikes that are roadbike conversions). One thing I have found useful when riding bicycles like this at slow speeds, is to pedal in slow motion while feathering the brake, instead of coasting. I would be interested to know whether this works for others. 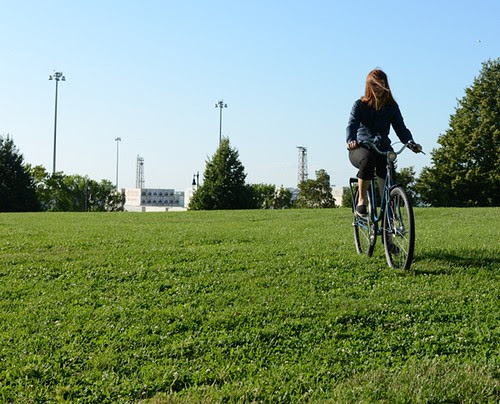 When riding at fast speeds, and particularly downhill, some cyclists are alarmed to notice that the font end of their bicycle will begin to vibrate in the region of the stem and handlebars. Assuming that nothing is loose on the bike or mechanically wrong with it, this is known as "shimmy" and there are ongoing debates regarding what causes it, whether it's a problem, and whether it is even a real phenomenon. This is something that a cyclist either gets used to, learns to avoid by abstaining from high speeds on that particular bike, or deals with by getting a different bike.
Turning
When cyclists describe a bicycle as unstable on turns, they can mean a number of things by this. One type of complaint is that the bike turns too aggressively or, "too much," overreacting to the turn. Another type of complaint is the opposite: that the bike keeps trying to straighten itself while the cyclist is still continuing the turn. Either of these qualities can make turning stressful, with the cyclist struggling to make the bicycle follow the course they would like it to follow. How to deal with this, other than developing handling skills in line with the bicycle's tendencies (or getting a different bike) I cannot say. 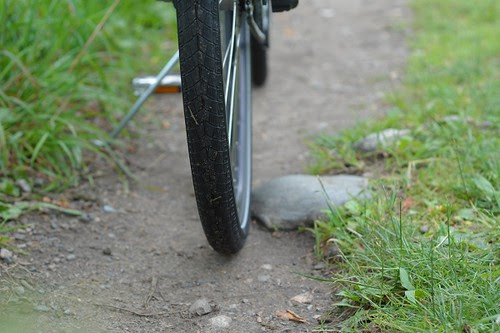 To some cyclists it is important how stable a bicycle feels when going over rough or uneven surfaces. While wide tires play a role, at least to some extent this seems to be also about the bicycle itself - with some bikes seemingly "unfellable" off road or over potholes, while others relatively easy to wipe out on, especially for novices. In the realm of upright city bikes,  there is an increasing number of manufacturers (Pilen, Retrovelo, Urbana) infusing classic transportation bicycles with mountain bike characteristics in a way that works well in this context. Converting an old hardtail mountain bike to an upright bike can work as well. Upright roadbike conversions on the other hand, tend to be problematic in this respect - particularly for beginners.
Tire width
Whether on smooth or rough surfaces, I have noticed that tire width can have a lot to do with a novice cyclist's perception of a bicycle's stability: Narrow tires are simply more difficult to balance on across a wide range of circumstances. If the bicycle's clearances allow for wider tires, this is an easy way to improve the feeling of a bicycle's stability. Cycling with a load
Finally, whereas a bicycle might feel perfectly stable unloaded, some notice that introducing weight in the front basket or on the rear rack can disrupt that stability. Most of the time, this happens with a front rather than rear load: the bicycle begins to weave or wobble if the front is overloaded. There can be a myriad of causes for this, and subsequently a myriad of ways to deal with them. Generally speaking, carrying weight lower on the bike (i.e. not mounting a basket on the handlebars) is said to improve stability. But some bicycles are just not intended for a front load no matter what. 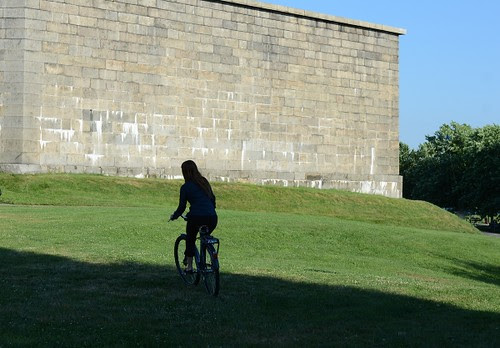 While it might be difficult to express what we mean by stability, breaking it down into specifics can be helpful - both in communicating with others and in gaining more insight into our own preferences. In attempting to understand the nuances of ride quality, it continues to amaze me how the same idea can be echoed by so many people, yet mean something slightly (or even not so slightly) different to each. Does a novice who finds their bicycle unstable need a different bike, or merely wider tires? Could be either.
Labels: beginners comfort mixte pilen