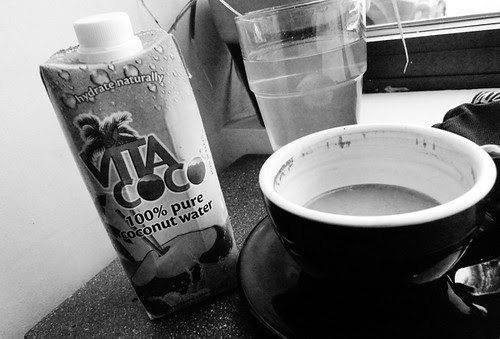 Yesterday I did a 40 mile ride in 97 degree heat and high humidity. As someone who is sensitive to hot weather, normally I would not go outdoors on such a day at all. But when the temperature is like this on a daily basis, the choice is either to stop riding or find a way to deal with it. One experienced cyclist I know suggested drinking large amounts of water starting early in the morning, and then a dose of coconut water right before the ride itself. I did just that, and it helped: I  was able to do the ride without feeling faint or headachy. Earlier in the week I tried to do the same ride and turned back 15 minutes later, nursing a migraine for the remainder of the day. I don't know how much the hydration regimen had to do with the improvement, but it made me curious about the relationship between drinking and cycling.
Take, for example, water: I've always been one of those weird people who doesn't like the taste of water and does not usually feel thirsty, so drinking so much of it was an entirely new concept when I began cycling. At first I had to practically force myself to do it, but at some point it started to become more natural and I developed the thirst mechanism I hitherto lacked. Those who've known me for a while are surprised that I now actually crave water, even when off the bike.
On the other hand, juice and energy drinks make me feel sick when I cycle. They are too sweet and I only feel more thirsty afterward. Things like Gatorade and weird chemical energy powders I just can't take at all - it goes straight to my head and makes me feel dizzy, as well as leaves a disgusting taste in my mouth. So in order to regain electrolytes, I've been eating bananas and putting a tiny bit of salt in my water. Coconut water was suggested as an alternative, and I was surprised to read about its electrolyte content: It is basically a natural sportsdrink. I still find it slightly too sweet and the aftertaste a little weird, but manageable - and it seems to work.
Then there is the question of coffee. I am addicted and drink more cups per day than I care to count. I like to drink coffee before a ride, because it makes me feel more energetic. However, some warn against doing this - claiming that it's bad for the heart to have coffee right before exercise. Are cyclists who caffeinate dooming themselves to early heart attacks? Seems unlikely to me, but I do wonder sometimes as I drink my nth cup.
And finally, alcohol. I am not a big drinker by any means, but I like an occasional white wine or martini. Sadly, I've discovered that I can't drink if I plan to go on strenuous rides, not even a little bit. Maybe I am worse at processing alcohol than most people, but if I have a martini in the evening and then try to go cycling the next morning, I can smell the gin coming out of my pores and just don't feel 100% on the bike. That's after just one drink. I cannot imagine how some cyclists manage to guzzle beer during races, or stop for lunch with wine in the middle of long ride; I can't do it.
What's your practice with regard to water, energy drinks, coffee and alcohol when cycling?
Labels: comfort sun and heat