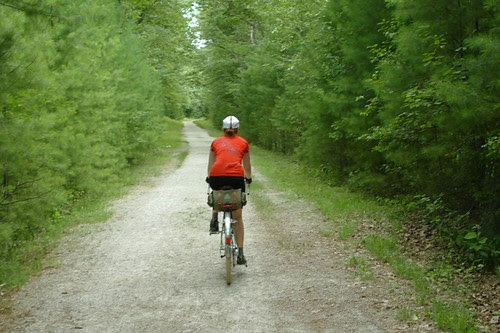 I've decided that I will definitely be going to the Deerfield Dirt-Road Randonnée (D2R2) this year - a scenic ride along New England dirt roads that will take place in August. The 40 mile route is said to be tame in comparison to the longer options, but I still need to get used to riding on dirt roads if I am going to do it. So we began by exploring some of the ones close to our usual cycling routes: the Narrow Gauge Rail Trail that runs from Bedford to Billerica, and the Battle Road Trail that runs from Lexington to Concord. Both of these are pretty short (3 miles and 5 miles), but they are the only dirt roads I know of around here that aren't too technical. We incorporated them into our regular 40 mile ride, setting off on bikes with wide tires. 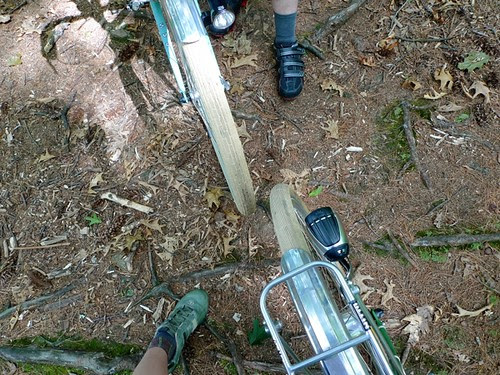 650B x 42mm Grand Bois Hetre tires on my Rivendell, and 700C x 50mm Schwalbe Fat Frank tires on his Surly. I know that some prefer to ride mountain bikes and be more upright on trails, but I really like the feeling of a roadish bike with dropbars on this terrain: My weight feels well-distributed and the speed and maneuverability seem to work in my favour when going either over or around tricky patches. 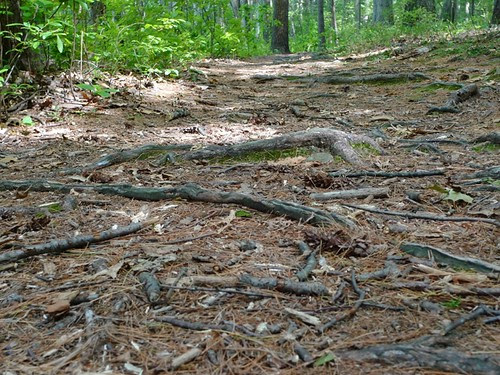 I am fairly certain that I would not enjoy a trail so technical as to require a dedicated mountain bike. Even this offshoot of the main path was too much. 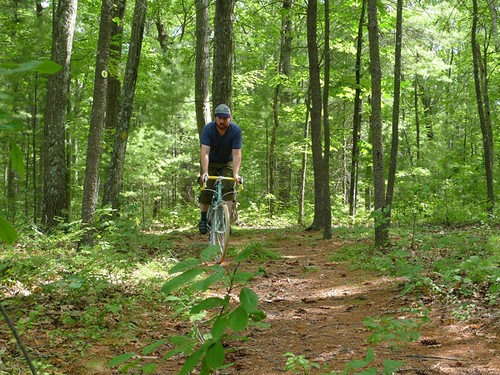 When there are rocks and roots jutting out every which way, navigating around them is stressful - while going over them feels like riding a pogo stick. I don't think this kind of surface is for me. 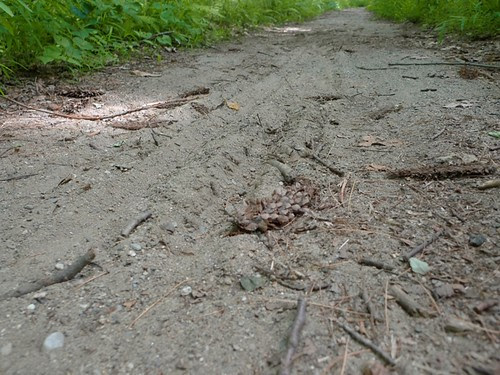 But the surface of the main paths looked like this most of the time: Mainly packed dirt with some gravel, and occasional stretches of sand. These things I am more or less okay with. 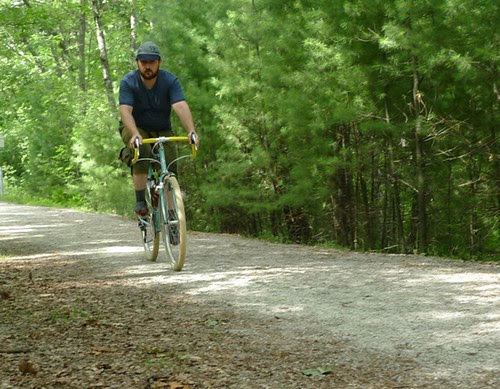 We maintained a speed of about 12-13 mph most of the time on this surface, and I was fairly comfortable. When gravel is loose, it can feel like it's slipping out from under your tires - but the main thing is to get used to that sensation and just keep going. Easier said than done of course - especially when cycling down a winding incline. Even a gentle incline and a subtle turn can incite panic if it feels like your tire is slipping sideways. But braking is a bad idea and trying to put a foot down is a bad idea - pretty much just trusting in the bike's momentum and continuing seems to be the way to deal with this. 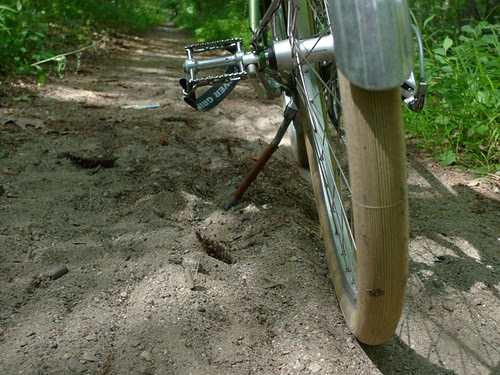 I did have a minor incident when we went over a stretch of deep sand. I was fine through most of it, but toward the end the mere awareness that I was cycling through sand just got too much and I lost my nerve. The bike started to topple and I sort of half-fell forward in slow motion (crotch onto toptube - ouch!), while desperately clutching the handlebars so that the bike itself wouldn't fall. Given that this hardly even qualifies as a fall, I am glad it happened: Now I understand how the bike behaves if I slow down in sand. 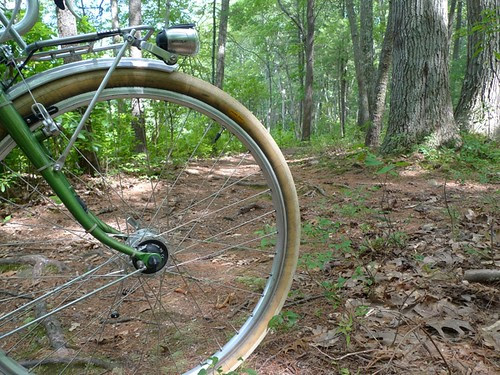 After this dirt road excursion, I am still not not sure how I feel about cycling off-road. Riding in the woods was nice and I do appreciate the fresh air and the quiet of being away from busy roads. But the slower speed felt limiting and I was very glad to be back on pavement and cycling at 20mph once we were done with the trails. The technical aspect - developing skills to transcend difficult terrain on a bicycle - is just not exciting to me at all in of itself. The aspect I do like is the feeling of exploring, and I hope to find some other trails that are longer and lead somewhere more interesting next time. What appeals to me about the D2R2 is the vastness and diversity of terrain it promises, with beautiful riverside views. It's a legendary ride, and I hope to be comfortable enough on dirt roads to complete it in August. Any advice for local routes to practice on most welcome!
Labels: ride reports Rivendell roadcycling Surly trails unpaved