The Brompton: an Extended Test Ride 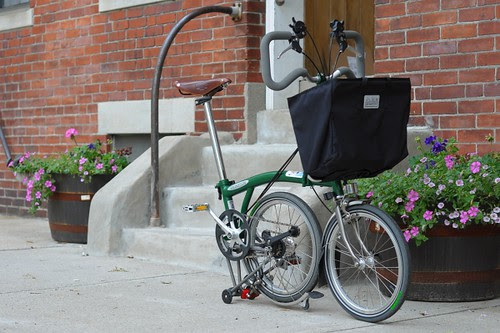 About a year ago, I briefly test-rode a Brompton folding bicycle and wrote about it here. We've been toying with the idea of getting Bromptons since before I started this blog, but it just hasn't happened. For one thing, I am not all that attracted to folders. They are fascinating, but they don't excite me in a way that would make purchasing one feel like an absolute priority. On some level, I also just instinctively don't trust that a small folding bike is as versatile and convenient as some claim: Is it really a good idea to ride a tiny bike in city traffic, where you want maximum visibility? Can a bike like this possibly handle hills? And don't those small wheels make for a harsh ride? My short encounter with the bike last year was insufficient to answer these questions, so I decided to test ride it properly once and for all. Harris Cyclery kindly lent me their demo model for this purpose. I left my own bike at Harris and rode home on the Brompton, then brought it back two days later. 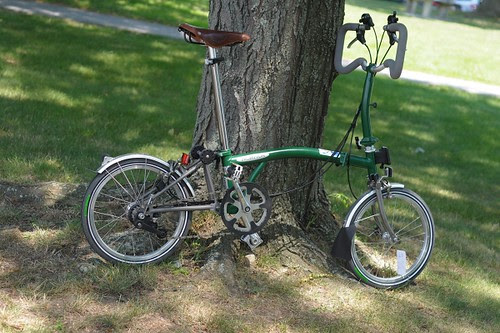 The model I rode was the P6L-X, which means that it is set up with "butterfly" trekking handlebars, 6 speeds, fenders but no rear rack. The "X" at the end indicates that the frame is the lightweight version - with titanium fork and rear triangle. Generally Bromptons are available either all-steel or with titanium parts, either with or without fenders and racks, with a variety of gearing options, with or without dynamo lighting, and with a choice of handlebar styles. 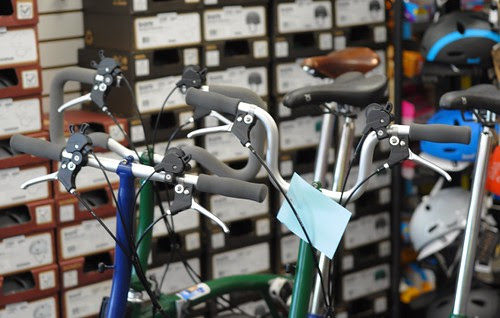 Here are the three styles of handlebars next to one another: the "S" type (mountain bike style straight bars), the "M" type (traditional upright bars), and the "P" type (trekking or "butterfly" bars). 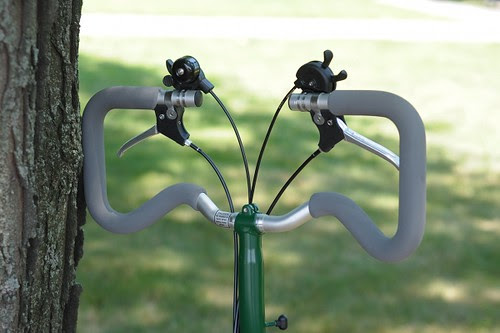 I chose a model with the trekking bars, because I was worried that my hands would bother me in the limited hand positions afforded by the other styles. I have problems with the nerves in my hands that make it difficult to hold them in the straight-in-front position for more than a few minutes at a time, so I did not want to take chances on the 9 mile ride home that awaited me.

Now I know that lots of people find these trekking bars goofy, and I agree. But you know what? The Brompton is already goofy, so to my eye the bars look right at home here. Imagine replacing that expanse of foam with some nice cork tape - I think this could look great. 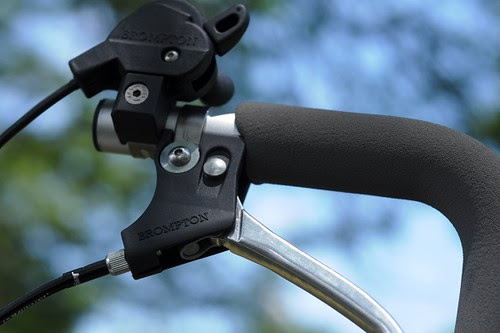 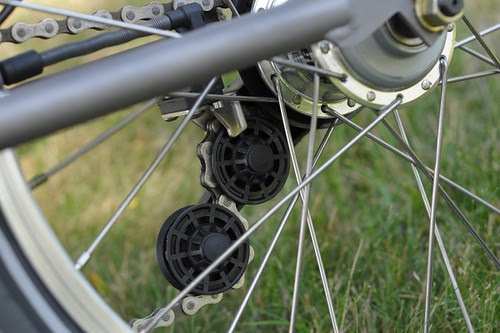 Here is a close-up of the hub and derailleur together. 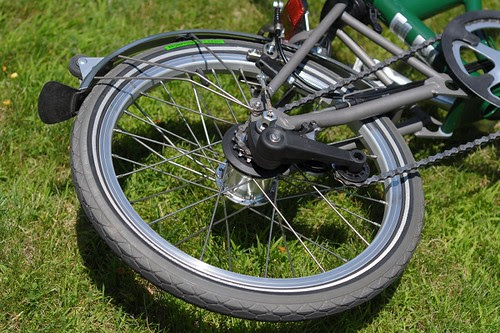 And a panned out view. Notice also the titanium rear triangle in this picture. 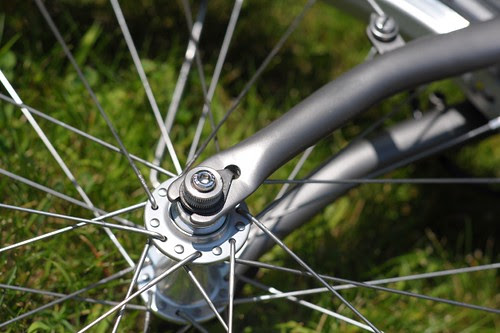 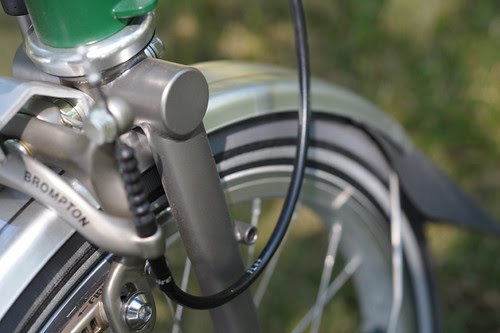 The crown on these forks is made in the style of the Raleigh/ Pashley fork, which looks very cute in miniature. On the all-steel models, the fork crowns look like this. 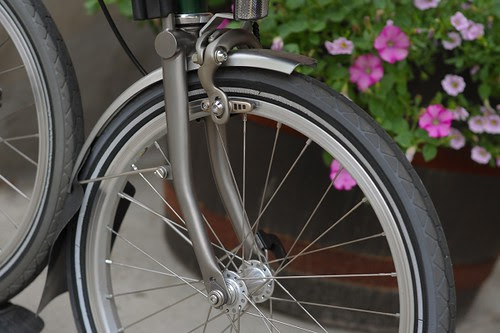 There is lots of debate among Brompton owners regarding whether the lightweight option is worth the hefty upcharge it fetches. The titanium parts reduce the weight of the bicycle by 2lb, and some claim that they also improve ride quality. Others claim that there is no difference in ride quality, and that the weight difference is negligible. Even after having tried both versions, I am unsure where I stand on this one. The online consensus appears to be that the lightweight package is not worth the price, but in person more than half of the Brompton owners I meet are sporting the titanium parts - shrugging diplomatically when questioned about its "value." Make what you will of that! 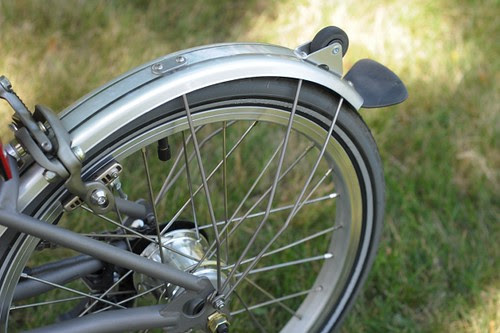 As I wrote in my previous review, everything on the Brompton is impeccably made, proprietary and adorable. The tiny fenders with tiny mudflaps are particularly endearing. 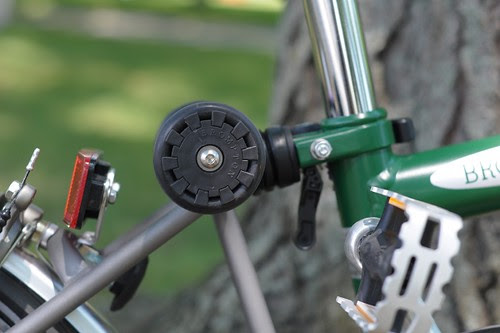 The little wheels mounted at the rear are so that the bicycle can be rolled when folded. 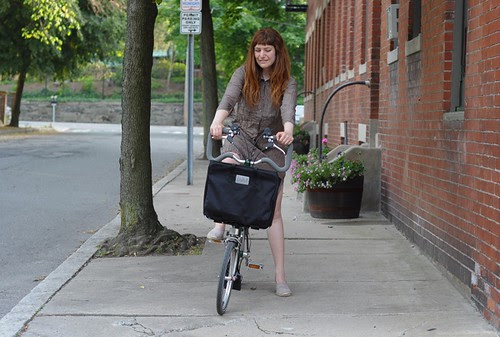 The staff at Harris Cyclery showed me how to fold and unfold the bike and attached a huge basket to the front, so that I could carry all of my stuff home. I first rode on the streets behind the store without the basket, just to get used to the bike. Because the Brompton is so low to the ground and has such small wheels, it initially gives the impression of being a very long bike and this took me some getting used to. It also felt "different" from normal bikes when starting from a stop: At first there was an odd sensation of momentary front end wobble when starting, so I practiced starting and stopping at intersections until it felt natural. Then I mounted the front basket and set off.
My ride home was just over 9 miles and the first half of it was on fairly busy, hilly roads, in 5pm suburban traffic. The Brompton does not handle like other bikes I am used to, but I did not find this bad or difficult to manage, just different. I soon discovered that the bike was easy to maneuver through tight spaces, and was capable of making dramatic turns gracefully and safely. I used this to my advantage when cycling through town centers in stand-still traffic. I was also pleasantly surprised by how easy it was to cycle up hill; The Brompton had a light, roadish feel to it when climbing. Cycling downhill felt stable, and the brakes were easy to control and modulate. 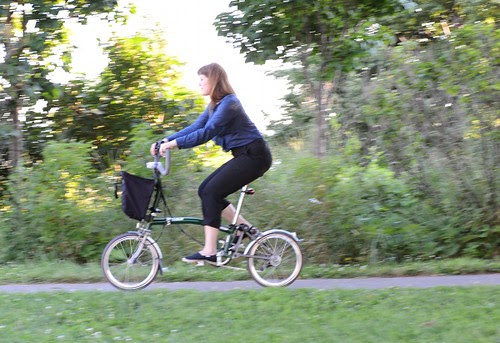 There is a lot of talk about small wheeled bikes having a "harsh ride quality," so here is my take on it. When riding the Brompton, I was aware of a constant, but extremely subtle feeling of road vibration regardless of whether the road was smooth or bumpy. This sounds worse than it actually is, so let me clarify: There was no pain or sense of being "knocked about" associated with what I am describing, just a very tiny, barely perceptible "shimmy" type sensation. Interestingly, when the bicycle actually went over bumps - even sizable ones - it handled them better than the average full-sized bike. So: I am okay with the subtle shimmy if it comes with the superior ability to swallow bumps, but others might not agree. Best thing to do is to test ride the bike and see how you feel about the ride quality - but "harsh" would not be a word I'd use to describe it at all. I can imagine riding the Brompton long distances on bad roads. 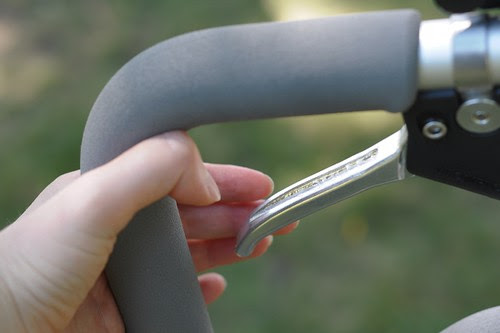 The trekking handlebars were not as helpful as I had hoped in allowing for a variety of hand positions. I mostly kept my hands on the tops and occasionally on the corners. It is not possible to reach the brakes from the other positions, but moreover the other positions are not especially comfortable. I've been told by several Brompton retailers now that many customers prefer the traditional M-bar, but with bar-end attachments that will allow for a more ergonomic hand placement. 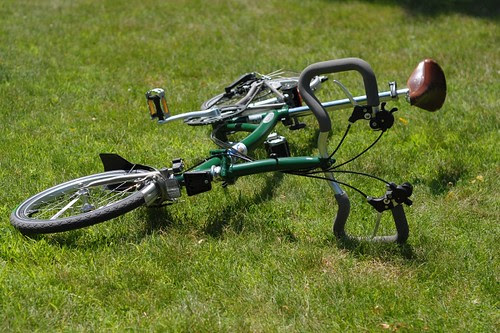 Both the Co-Habitant and I rode the Brompton repeatedly over the course of the two days I had it on loan. My positive impressions included the high quality of the build, the smoothness over bumps, the maneuverability, the ease of mounting and dismounting (low step-over), the compact size, and the amazing load capacity. This bike is designed for enormous front bags, plus whatever the rear rack can fit - I had no idea it could carry this much stuff. And as far as aesthetics, I find the Brompton charmingly eccentric, and would be fine riding it. My favourite colour option is the raw lacquer, though I also love the new sage green. My not so positive impressions included the weight (a 20lb folding bike?), and the fact that should you not wish to drag the bike around with you everywhere, it is not so easy to lock up safely. While I know that most people are crazy about the famous Brompton fold, I am neutral about it. Maybe I'm just being difficult, but I don't get the miracle there: Okay, so it folds... Isn't that the whole point of a folding bike? But I am only partly serious and I do understand that it folds better than the other folders out there. It is a neat design that is especially conducive for travel - which is precisely why we are considering it.
In reality, our biggest problem with buying Bromptons is that in the course of choosing all the options we'd want (good lighting, 6-speed gearing, fenders, racks, extras) the bikes transform from what initially promises to be reasonably priced to something entirely unaffordable. Depending on the components and options selected, a Brompton can easily double or even nearly triple in cost, so that is something to keep in mind. Is it worth it? That depends on how much you want or need a folding bike. And among folding bikes, the Brompton is widely acknowledged to be "the best." Thank you to Harris Cyclery, in West Newton, MA, for this extended test ride.
Labels: bicycle reviews Brompton