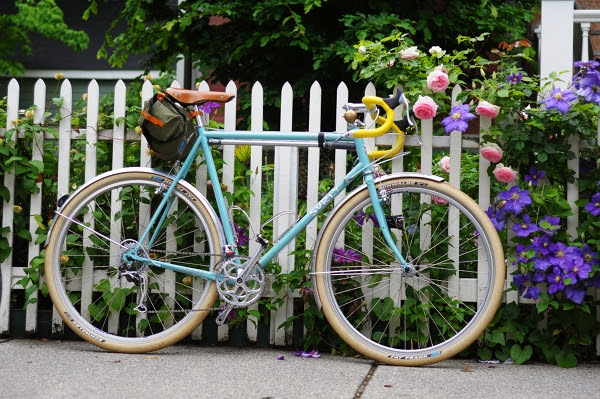 Two months ago, the Co-Habitant got a Surly Cross Check frame that he wanted to build up as a fun on/off road bike around a touring wheelset with fat tires that we already had in our possession. He is getting a nice roadbike later this summer (waiting for the frame to be finished!), and the Surly was meant to be "the other bike" - a playful, go-anywhere bike built around an inexpensive frame, mostly using components we already had. He swiftly put the bike together and has now cycled about 500 miles on it. The Cross Check is technically a cyclocross frame, but it is versatile and can also be used for touring and commuting. Given its unusual build, we've had many questions about this bike and so I offer a review on the Co-Habitant's behalf. 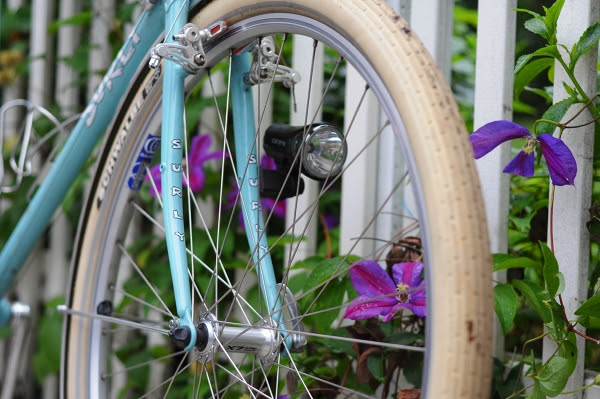 The most noteworthy aspect of the build, is that we were able to fit the frame with Schwalbe Fat Frank tires and metal fenders. This looks great, and the tires feel awesome, but to tell the truth the whole thing was a pain. The Cross Check is described as being able to fit tires up to 45mm with fenders, but the Fat Franks are 50mm. It was a tight fit that required some DIY. Initially we wanted to use Berthoud steel fenders, which are available in 700Cx60mm, but the Co-Habitant was not impressed with their quality upon seeing them in person. He also dislikes plastic fenders and did not want to use SKS. In the end he decided to get the Velo Orange Zeppelin 700c x 52mm fenders (which are rated for 42mm tire), and "massage" them to fit. 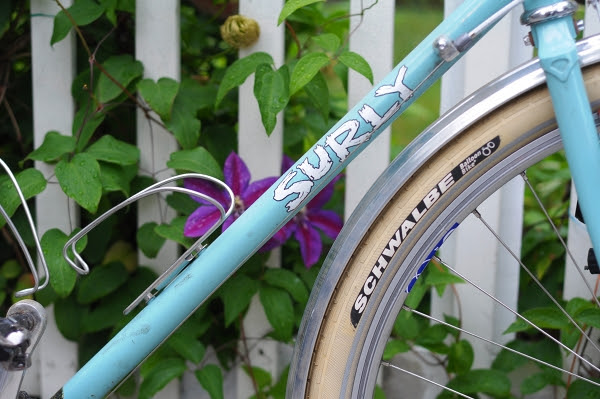 Out of the box, the fenders were too tight: The edges touched the sides of the tires and there was not enough space under the brake bridge and behind the seat tube to mount them high. So, the fenders had to be opened up. But when you open up a fender that's 52mm, it no longer follows the line of a 700C tire, instead making the opening much smaller. So while opening the fender, it had to also be stretched out -  taking care not to crimp the edges. To do this, he used a flat low table holding the fender upside down against its surface and pressing down gently, rolling it end to end - opening and pressing down. Pressing down would close the fender and opening it would alter the curvature, so the back and forth balanced out the opposing forces. 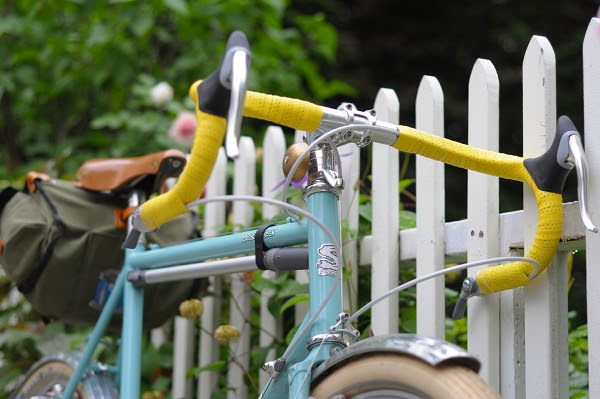 For the front fender there was sufficient clearance underneath the fork crown, but in the rear there was less clearance - the brake bridge is quite low and the chainstays are short. He had to dent the top of the rear fender (which isn't visible) in order to get it closer to the brake bridge, then fabricate a custom circular-L-bracket to hold the fender in place, screwed into the eyelet of the brake bridge. To dent the fender, he placed it on some clothing on the top edge of the back of a chair, then hit it with a rubberized end of a pedal wrench, creating a grooved dimple. He also had to dent the ends so that they wouldn't pinch near the bottom bracket. It was a bit of an ordeal, and if you are going to attempt this beware that it is easy to ruin the fender - it may not be a risk worth taking. 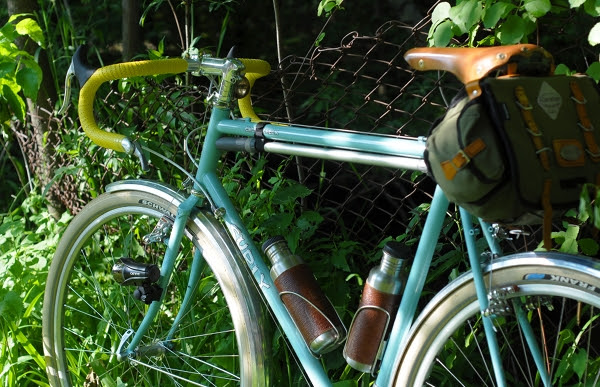 Happily, the "massaging" was a success and the Cross-Check looks great with the fat cream tires and the VO Zeppelin fenders. The ride is fast and cushy, and the Co-Habitant is discovering just how addictive wide tires are. On the downside, the clearances between the tires and fenders are so tight, that the set-up is not really practical for serious off-road cycling: stuff can get caught in there and cause problems. But for fire trails and gravel paths it is fine, and if he decides to do anything more serious (like the D2R2!), he will remove the fenders. 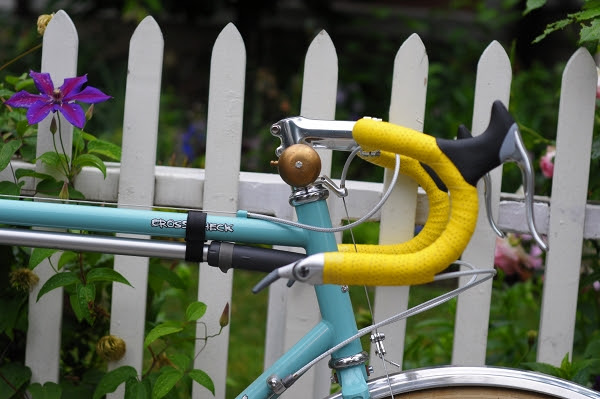 The rest of the build for this bicycle has mostly already been described here, but a few changes have been made since then. The original shortish stem has been replaced with a 9cm stem, flipped upside down. The original yellow cloth tape got filthy and tattered fairly quickly, so we replaced it with Fizik tape. Initially, the cloth tape was supposed to be shellacked to a warm caramel - but the bright yellow looked so "right" on this bike, that it began to seem like an inherent part of its personality and he decided to keep it that way. He also added a frame pump, lamenting the lack of pump peg and using a strap to hold it in place. 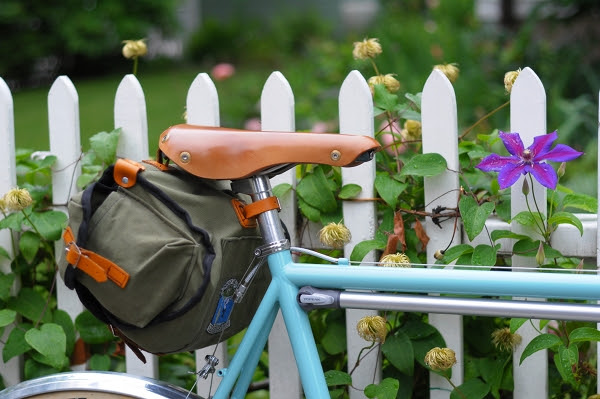 After two years in a lukewarm relationship with his Brooks Flyer saddle, he decided to sell it and replace it with a Berthoud touring saddle - the male version of the one I now have on my Rivendell. So far he loves it. 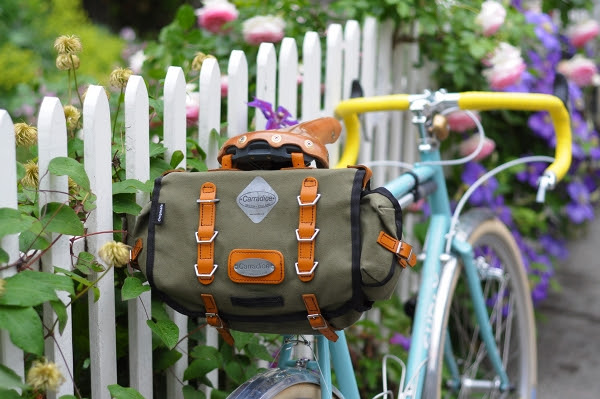 He fitted the bike with the Carradice bag that used to be on his old bike. 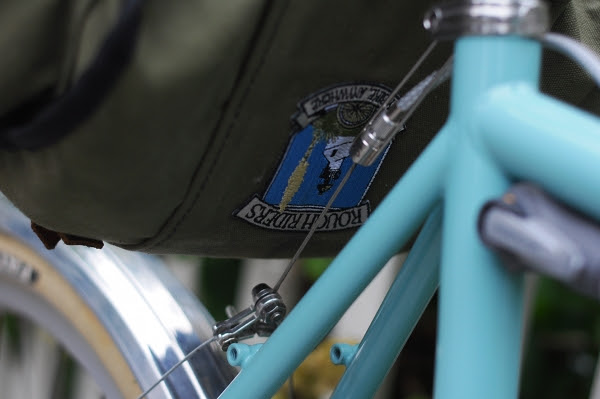 It now has a patch on it, to cover the tear that happened as a result of the bag rubbing over the brake cable on his old bike. 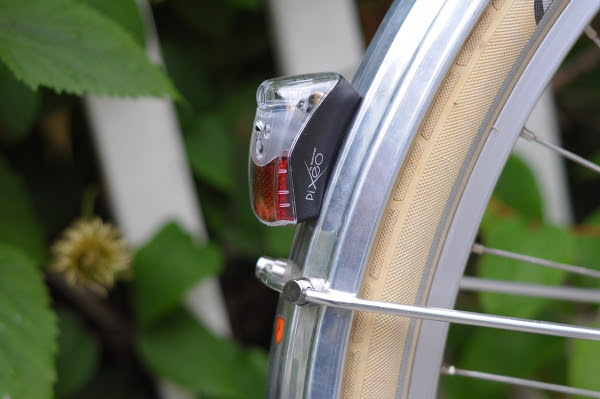 He affixed a CatEye headlight to a braze-on on the front fork, and a Spanninga Pixeo tail light to the rear fender. 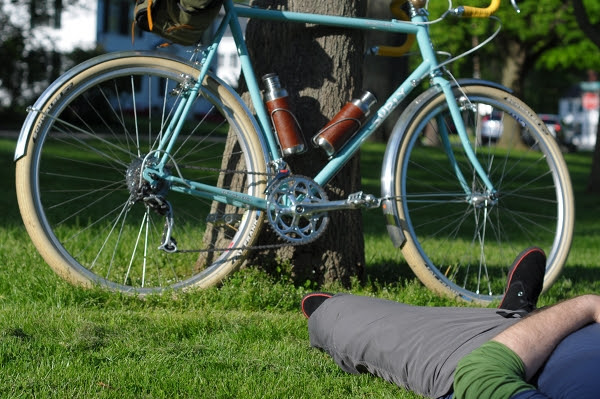 He tried to liberate himself from clipless pedals and rode the bike with touring pedals for a few weeks, but ultimately could not take it anymore and put his old clipless pedals back on. Fair enough, but this does limit the versatility he originally had in mind for the bike. 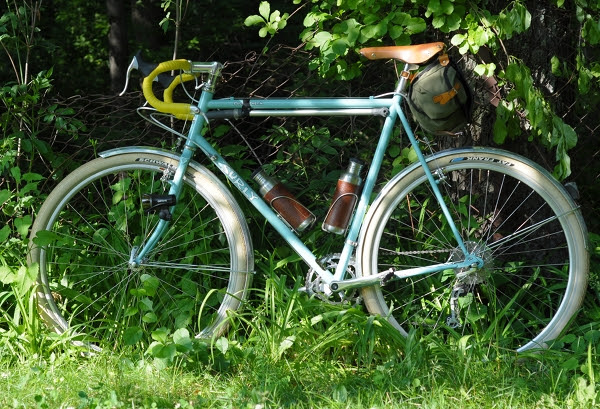 After riding the Surly Cross Check for two months, his main feedback is that the bike is faster than he expected - even with the wide tires and a bunch of weight in the saddlebag. While initially he intended to use the Cross Check in conjunction with his old Motobecane until he got his new roadbike, the Motobecane was retired as soon as he started riding the Surly - no need for it, since the Cross Check did everything it could do and more. He does not find the bike sluggish, and it seems that the tubing is just right for someone of his stature (6ft/ 200lb+). Overall, he is pretty happy. Though he likes lugs, he also likes a nicely done TIG-welded frame and the Surly suits him just fine. 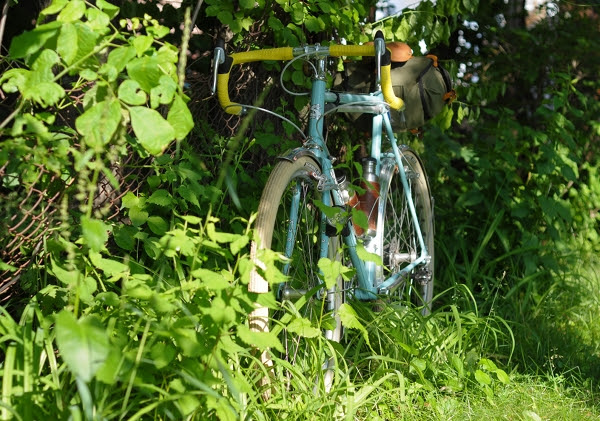 My take on his Cross Check... I think it is a well-made, attractive frame for the price and I am glad that he finds it comfortable and fast. To be honest, I think that at least to some extent this build was not so much about practicality, as about doing a fun and challenging project using a bunch of components that we had acquired but had no use for. If the original purpose of the bike was off-road, then the tire+fender combo with such tight clearances does not really make sense. I have a feeling that he will end up using it mainly on the road, because I can't imagine him bothering to remove and reinstall the fenders every time he wants to take it on serious trails. And this means that when he gets his long-awaited road frame later this summer, the functionalities of the two bikes will overlap considerably. Not that there's anything wrong with that. But given how much he likes the Surly I am almost worried that he might be disappointed with the special bike he's waiting for. Well, hopefully not.

On a more general note, while the Cross Check is clearly versatile enough for commuting and touring, I wonder whether many cyclists actually use it for cyclocross racing. I have a hard time imagining that, given how relatively heavy it is - even the floor models with narrower tires and sportier components. But maybe I'm just biased from having handled too many lightweight bikes recently.

The Surly Cross Check is a fun bike with a cult following, and it is particularly impressive how customisable the frame is. With its happy colours, fat cream tires, elegant fenders and classic touring accessories, the Co-habitant's Cross Check is distinctly his own.
Labels: bicycle reviews Co-Habitant diamond frame DIY Surly