The Speeding Bullitt of Somerville 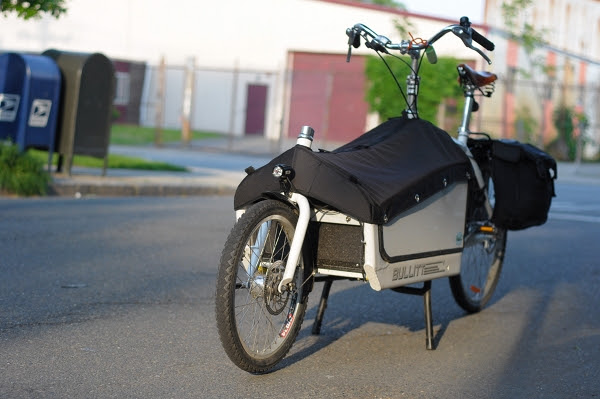 Sometimes Somerville really is a village. On my way home last Friday, I discovered the Co-Habitant, Somervillain and Brian P. engaged in what appeared to be an impromptu bike-testing party, after having crossed paths on their way home from work. The many other cyclists who rode by craned their necks with interest, because of course none of these were "normal" bicycles. Somervillain had his Bike Friday tandem, which he was riding alone. The Co-Habitant had his Pashley. And Brian P. had his Bullitt cargo bike. My own arrival on the swan-frame Pilen complemented the scene nicely. The sun was setting over the Peter Forg Manufacturing Co., bathing the street in that magical golden light. I had wanted to try Brian's cargo bike, and now was my chance. 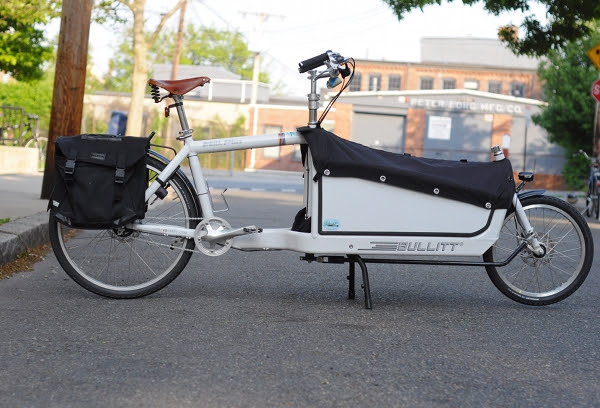 The bike is a Bullitt "Milk Plus" model, made by Larry vs Harry. It is a Danish cargo bike, based on a traditional "long john" design - similar to a Dutch bakfiets, but with a longer and narrower cargo platform. Larry vs Harry market the Bullit as being fast and sporty in comparison to other cargo bikes. The bike is 245cm (96.5") long, 45cm (18.5") wide, and it weighs 24kg (53lb) unloaded.  It has a 20" front wheel and a 26" rear wheel. Detailed geometry specs and blueprints are available here. 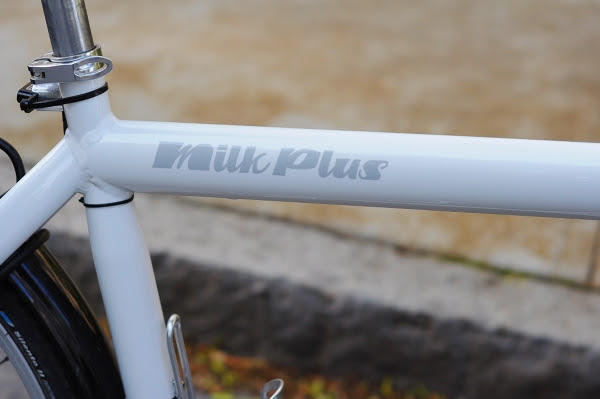 The frame is heavy-duty welded aluminum. 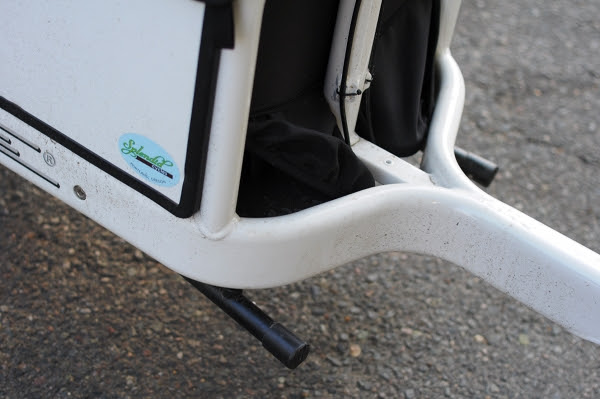 The frame is described by Bullitt owners as extremely stiff. I like the part where the main tube branches out to form the platform - there is something visually appealing about this junction. 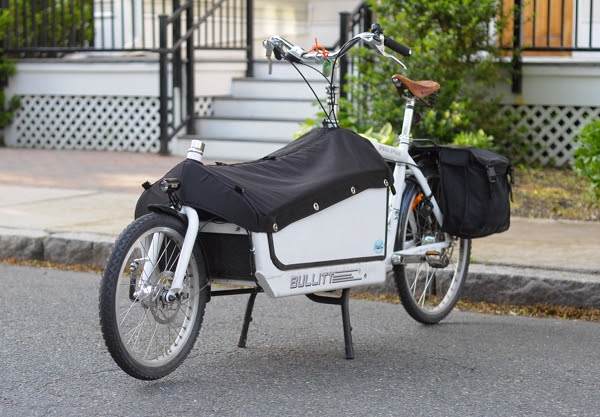 The (optional) cargo box is plywood. It can be used to carry cargo or passengers and comes with a water-resistant cover. 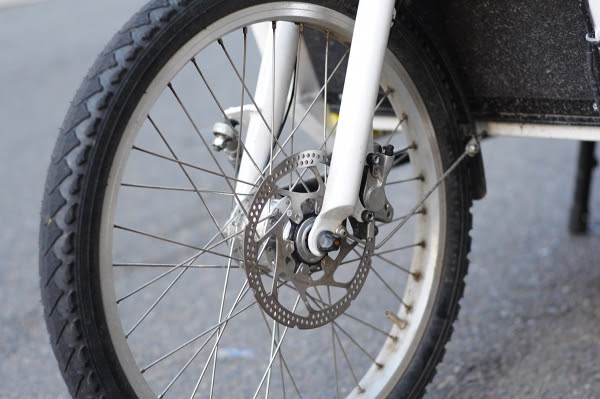 The bike is equipped with disc brakes. 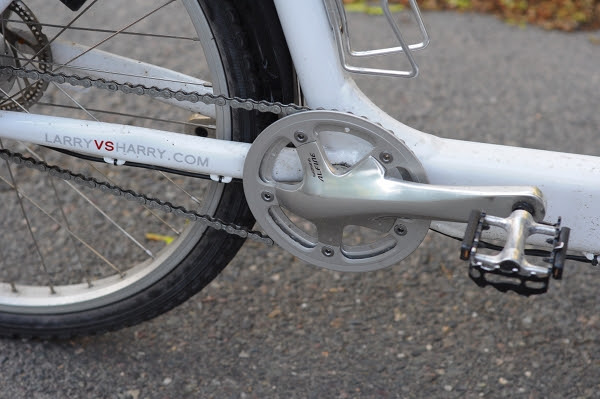 And an 8-speed IGH drivetrain. See here for complete specs. 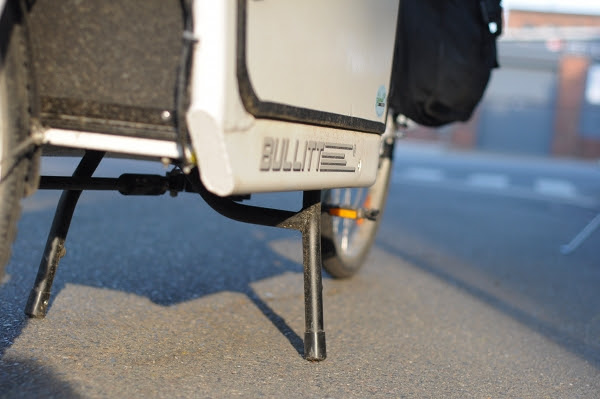 The wide double kickstand keeps the bike unquestionably sturdy and is easy to activate. 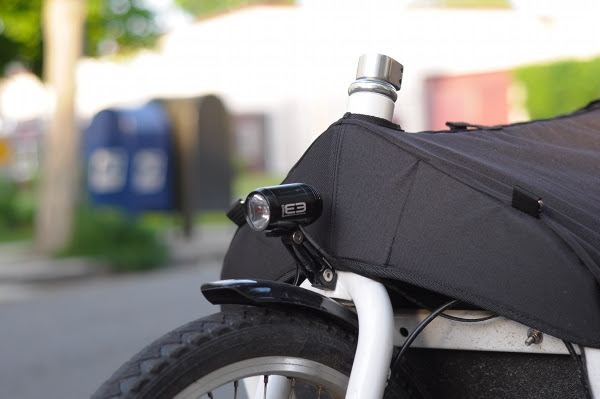 Brian bought this bicycle from Splendid Cycles in Portland, OR, and they installed a dynamo hub with the Supernova E3 headlight and tail light. 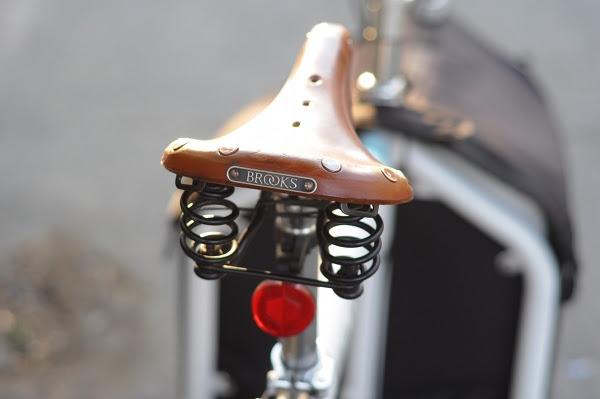 He also replaced the stock racing-style saddle with a Brook Flyer, and he says that that the sprung saddle works well with the stiffness of the frame. 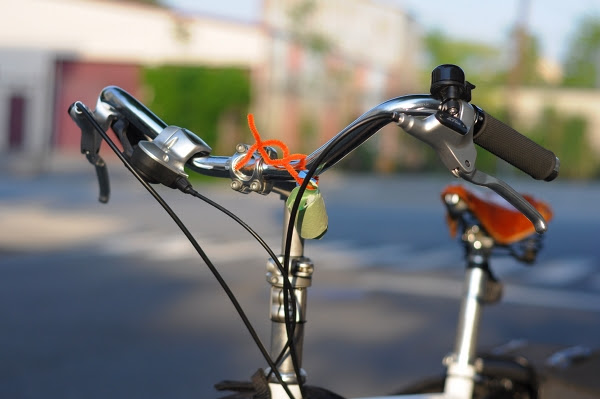 He replaced the stock mountain bike-style handlebars with North Roads, 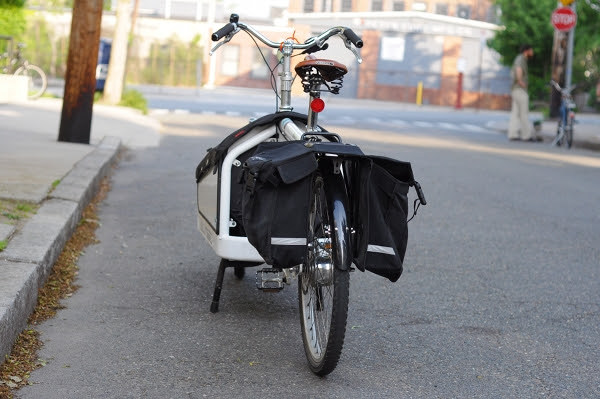 and added a modified Civia rack from Calhoun Cycle with a set of Dutch panniers. 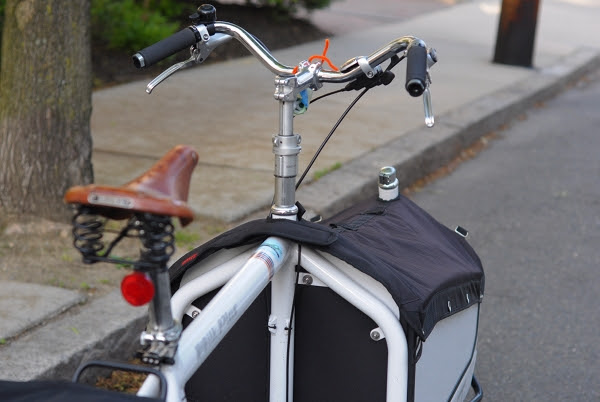 I found the overall look of the modified Milk Plus Bullittt extremely attractive and was looking forward to trying it. It felt well-balanced as I was walking it, which gave me hope. 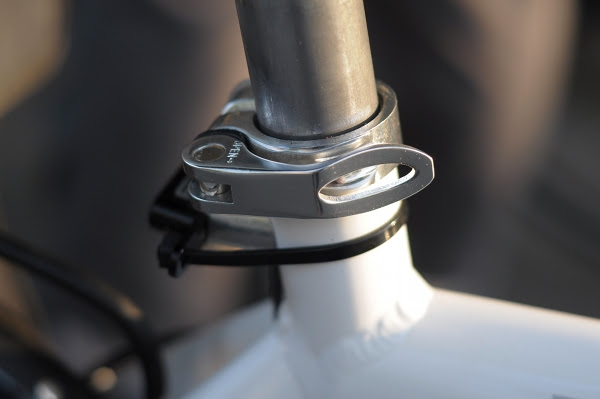 The saddle is quick release and smooth to operate; I was able to adjust the saddle height myself. 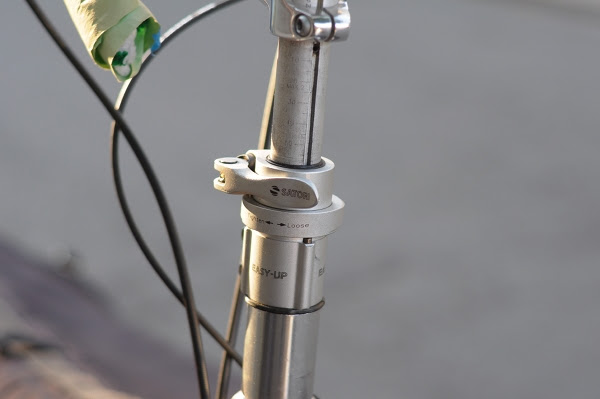 The stem is also quick release, making it possible for different riders to adjust handlebar height to their tastes. 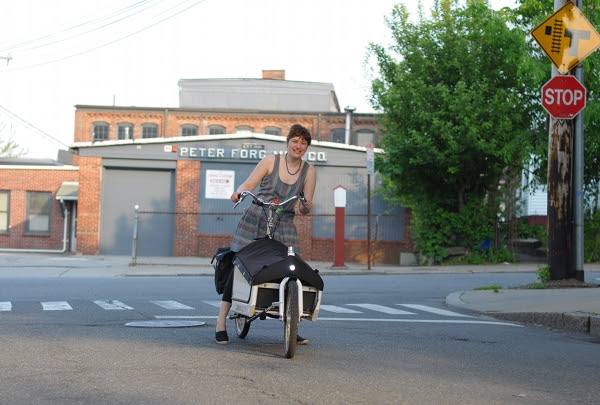 I was able to step over the Bullitt's top tube while wearing a skirt without having to swing my leg around the back; the standover height is similar to that of a large mixte. I was comfortable and ready to ride the bike... which, unfortunately, was not so easy! The main problem is that the Bullitt needs to gain momentum in order to become stable. When just starting or going slowly, the long front end fishtails wildly and the bike is difficult to control. 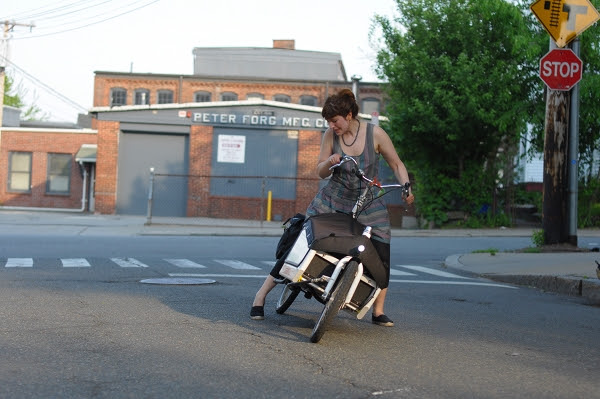 After a few shaky starts, I did manage to ride the Bullitt down the street and pick up some speed, only to falter when attempting to come to a stop. Luckily, the bike was easy to hold up once it started to fall over to the side, so I did not outright crash it into the ground. Not wanting to damage somebody else's shiny bicycle, I did not make further attempts. Not pictured here, but Somervillain tried the Bullitt as well with similar results- false starts, then finally getting it going, then dumping it when attempting to stop at the end of the street. There is a learning curve. 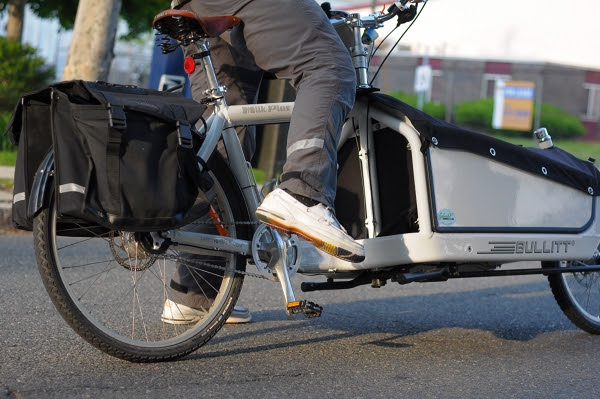 I understand the concept of having to get the bike up to speed in order to achieve stability. But unless I am missing something, this seems at odds with using it in stop-and-go traffic - which is what I thought cargo bikes are designed for... In any case, some riders may find operating the Bullitt more intuitive than others. 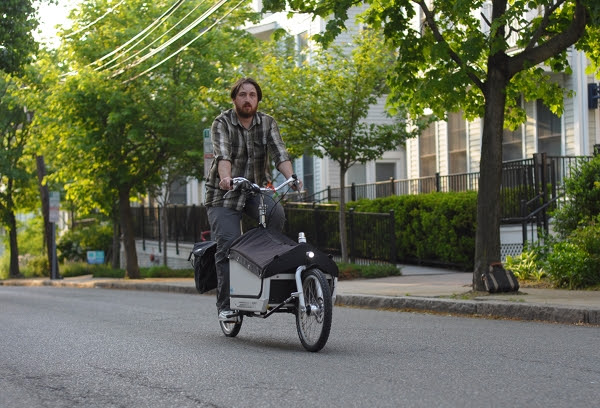 The Co-Habitant pretty much was able to ride it, though he described the same fishtailing sensation and said that he'd need a lot of practice to feel comfortable with it in traffic. 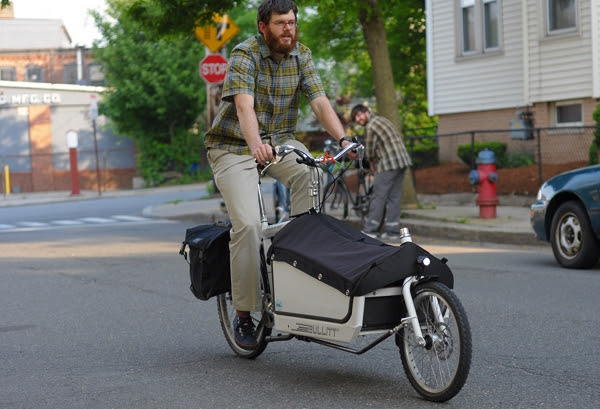 Brian handles the bike like a pro, making it look extremely easy. He reports having been able to ride it pretty much on the day it was assembled - sticking to local streets initially, then venturing into heavier traffic. 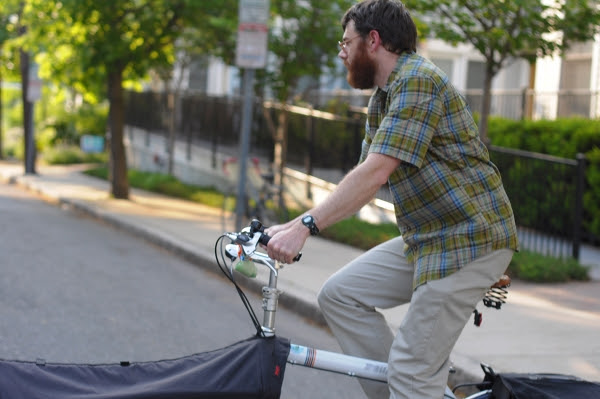 Looking at these pictures, it occurs to me that perhaps people with beards take to the Bullitt faster than people without. Based on our very scientific sample size of n=4 at least, that seems to be the case. 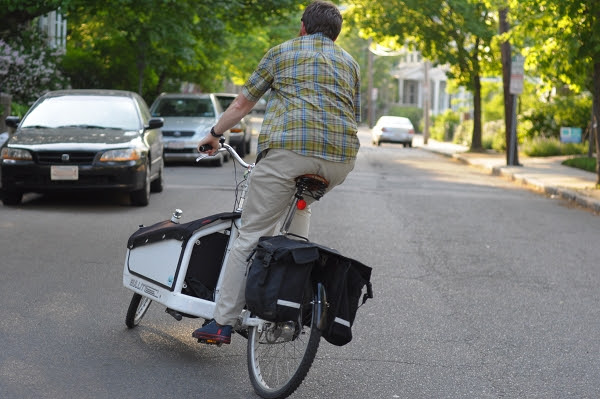 At this point, Brian has had the Bullitt for just over 2 months and enjoys it tremendously. It is indeed supposed to be faster and more maneuverable than other cargo bikes, once you get the hang of the handling. Brian lives atop of an insane hill that I would hate to tackle every day even on a roadbike. He finds the Bullitt manageable when cycling up it. Typical commuting speed is about 10mph, or faster with no cargo. Normally, Brian uses the Bullit to pick up his son from daycare and for groceries. He has also done a camping trip on it once, which he will soon describe on his website. When I asked Brian for critical feedback, he replied that the size made the bike unwieldy to walk - for example, when strolling with someone else on the sidewalk. There is also no good way to secure valuable items on the bike, making multi-trip shopping difficult. These issues are of course common to all cargo bikes. 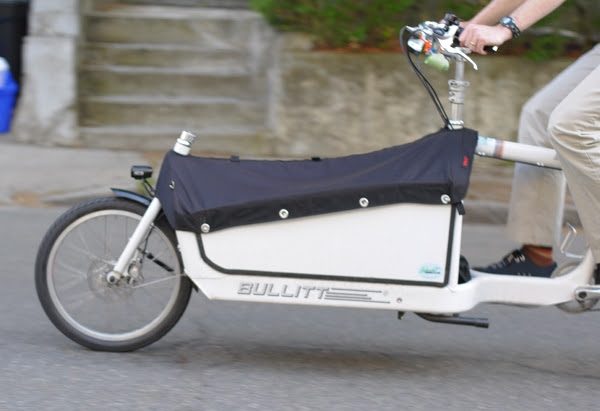 The Bullitt Milk Plus with Brian's modifications is dashingly handsome, and just the right size for the kind of cargo we'd need to carry. If I could ride it, I'd be seriously fantasising about it. But while I can see myself quickly getting used to the Christiania trike I tried earlier, realistically speaking I cannot imagine feeling comfortable enough with the Bullitt to ride it in traffic. The slow-speed handling is just too quirky for me. Reactions to the Bullitt seem to greatly depend on individual bike handling skills and preferences. For those who can handle it, the Bullitt is a unique cargo bike option in the combination of speed, agility and load capacity it offers. But I would strongly recommend test riding this bike before buying.
Labels: bike friends Boston cargo bikes test rides