A Handful of Rust: Bicycles As Waste 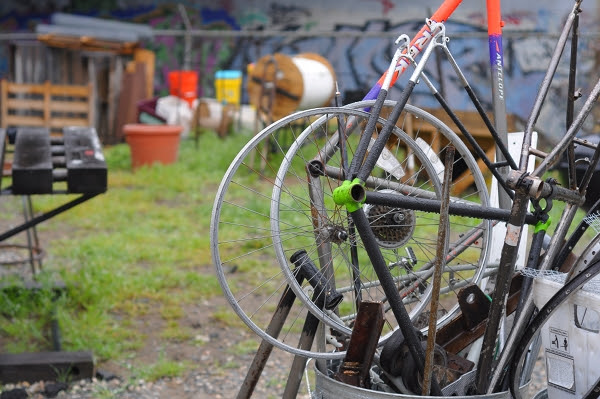 One argument made in favour of the bicycle, is that it is a machine that is timeless. With proper maintenance and care, a bicycle can last for many generations. And those of us who own functional bicycles from as far back as the 1930s know that to be true - at least in theory. However, in practice garbage dumps throughout the country are full of discarded bikes. Countless abandoned bicycles rust away locked to urban fixtures until the city removes them. New bicycles are churned out by factories every day as old ones become junk. The bicycle's resistance to obsolescence is a heavily stressed selling point in today's green-hued marketing... and yet reality does not reflect that. When I am asked how I feel about that contradiction, it is not easy to respond without ruffling feathers.

Looking at bicycles that are rusting away abandoned, I notice a trend: It is not the oldest bicycles that are being treated as junk. In fact most of the bikes are relatively modern. The factors they have in common are awkward construction, crude workmanship, low-quality components, and a certain overall genericness that just seems to make them impersonal and unloveable. These are mostly bicycles from big box stores, or lower-end models from popular manufacturers sold at dedicated bike shops. The truth is that even when new these objects do not look "timeless" to me. They look cheap and destined for the dump within several years - seemingly by design. So when I am asked why I do not promote "more accessible" (mass-produced, lower-end, lower-priced) bicycles, that is why. I sincerely feel that the vast majority of those bikes are designed to be bought on a whim (why not? they are affordable!) and be discarded shortly thereafter.

Bicycles that are produced thoughtfully and with care cost more, because they are more costly to make, and there is just no way around this reality. But it is not such a bad thing if we perceive a bicycle as special and expensive. When an object is meaningful to us and takes time to save up for, we value it more. Even if the bicycle ultimately does not work out (or even if we lose interest in cycling altogether), we will be unlikely to discard or abandon it. Instead we will sell it or pass it on to somebody else - just as with any other valuable, well-made object that we no longer need or want. I think that I have a pretty good idea which of the bicycles marketed today will end up in the garbage dump 5 years from now, and which will be cherished and ridden, even if not by the original owner. The latter is the kind I want to promote and the former is the kind I do not.

For the same reason, I am conflicted about the bike share programs that have been popping up in major cities. My enthusiasm for the idea of bike sharing is dampened by firsthand knowledge of what happens to many of these bikes, and how quickly it happens. I have seen large municipal pickup trucks in Vienna come by the CityBike stations on a regular basis and cart away dozens of damaged bikes, replacing them with new ones. The wastefulness of the Parisian Velib system has been well documented as well. The sad truth is that people do not treat well objects that do not belong to them. And as much as I don't want to rain on the bike share parade, I find this problem difficult to side-step. There have been grassroots initiatives to use second-hand bicycles for bike share programs, but as far as I know they have been consistently rejected.

Do you feel that the current trend for all things bicycle will just generate more waste down the line, or is that a cynical view? How do you feel about bike share and the various methods of bicycle production in relation to this question?
Labels: social commentary