The Clipless Ambush: a Tale of Failure 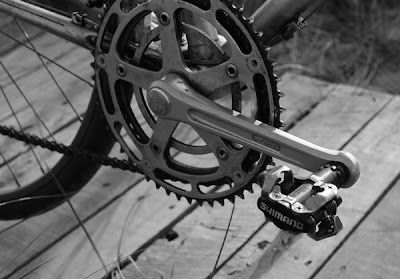 Well, my first encounter with clipless pedals occurred sooner than I anticipated. Last week the Co-Habitant decided to update his pedals, and the new set arrived in the mail today... which meant that he could gift me his old ones. I thought that surely this gifting would take place some time in the future - a distant, abstract future. But no. Cheerfully he attached them to one of our vintage roadbikes right then and there, so that I could give them a try. Don't get me wrong, I myself had expressed interest in this. But... I don't know, I just didn't expect it to happen immediately!

I already owned a pair of compatible shoes, having bought them on clearance last summer "just in case." With apprehension I watched him attach the cleats to the soles, trying to gauge the correct position. I then put them on and dragged the bike over to the kitchen sink, so that I could hold on to the edge with one hand as I tried to figure out how the contraptions worked.

I expected that clipping in would be relatively easy, but clipping out difficult. It was the opposite. At first I could not to clip in. I tried and tried, but my foot stayed on top of the pedal and the mechanism would not engage no matter how hard I pressed. I struggled to figure out what I was doing wrong, but the explanation turned out to be simple: I am a weakling. We had to loosen the tension almost to the max for my foot to engage the mechanism. Even after that, I still had trouble pressing down with enough force and in the exact position necessary for the cleat to catch. Clipping out, on the other hand, was intuitive: the sideways twist of the foot is exactly the same motion required to get out of Power Grips, so I found it natural. Transitioning from the kitchen sink to the trainer, I practiced for some time, clipping in and out successfully. I then decided it was time to go outside. I felt pretty confident at this point. Nothing to this.
It was around 10 pm and the small side street behind our house was well lit and empty of cars. Confidently, I carried the bike outdoors, swung my leg over the top tube, and clipped in my right foot. Now all I had to do was push off, coast for a bit, then put my left foot back down on the ground. That would be such an easy first step. No different from Power Grips. Just need to do it. Now. Go! But... it was not to be.  Like some malfunctioning marionette, I kept clipping and unclipping my right foot, trying to mentally force myself to push off, but it wasn't working; nothing was happening. The amused Co-Habitant offered to stand at the end of the street and "catch me" if I found myself unable to unclip when I got there. But imagining that just made it worse. It began to feel as if I'd forgotten how to ride a bike entirely.
There is no redeeming ending to this story. After a good ten minutes I gave up and went back inside, my head hung low in shame. Obviously I am just not ready.

Aside from the tale of failure, I have some observations about the shoe and pedal set-up. I can't find the model name of the shoes, but in retrospect getting clipless shoes with laces was silly. Being stiff and unyielding, they are difficult to put on and tighten, and it's a pain to tuck the laces under the velcro. I am also not sure these pedals are right for me. They are Shimano SPD 520s: mountain bike style, double sided and with a very small surface area. I know that many love this type of pedal, but to me it felt like not enough of my foot was connected. Pedaling on the trainer, I had the sensation that there was too much pressure on the spot where the cleat meets the pedal and that a larger contact area would have been better. Maybe these particular shoes are not stiff enough, or maybe I would do better with a different style of pedals. There seems to be a consensus that the mountain bike clipless system is easier than the road system, but I wonder whether I might prefer the latter. Unfortunately, there is no way to try these things out.
Navigating the world of clipless shoes and pedals is complicated, and at the moment it seems best to postpone it... at least until I am brave enough to use the ones I have beyond the confines of my kitchen!
Labels: clipless roadcycling technique