Misadventures on the MUP 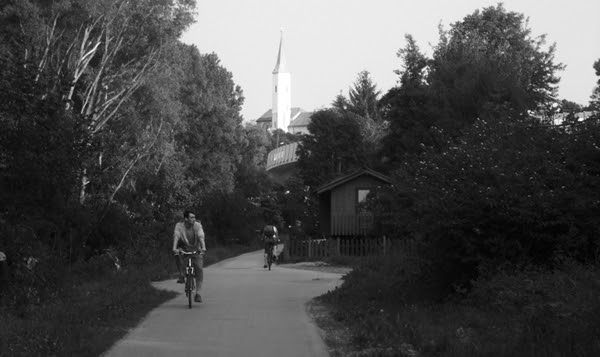 Last evening was a low point for me... I yelled at someone on the Minuteman Trail. I was cycling home after a ride, and the trail was more or less empty. I am normally ever-vigilant for dogwalkers and baby carriages suddenly appearing out of nowhere, but this time I had let down my guard. I was going faster than I normally do on the trail, when from around the bend, three cyclists - traveling three abreast and taking up the entire width of the path - came barreling toward me at a similarly unadvisable speed. They were chatting and the cyclist who was headed for a direct collision with me had her face turned toward her friends instead of looking ahead of her. Time froze and I kept expecting that any instant now she'd see me and get out of my line of travel, but she didn't. Not wanting to end up in the bushes or in a pile of bikes and limbs, my mind went blank and I heard myself scream "MOVE!" in a tone of voice that was so menacing that I even scared myself.

It got their attention and a collision was avoided. But as I continued on my way, I heard a distinct "and a nice day to you, too!" from the direction of their receding forms. I felt a wave of shame wash over me. Sure, in a perfect world I would have yelled "excuse me" or "watch out" instead. But I yelled the first thing that popped into my head, and if I didn't we could have both been in the hospital right now.

Multi Use Pathways can be difficult for cyclists precisely because of situations like this. The trails are narrow and those who travel along them do not always behave predictably. Joggers wearing sound-proof earphones, rollerbladers veering from side to side, dogwalkers brandishing those terrifying invisible leashes stretched across the path, unsupervised children making spontaneous U-turns on their tricycles... It's a jungle out there. If I could easily do so, I would avoid MUPs entirely, but the alternative route out of town is 10 miles on a very busy road. So I try to be cautious, stick to a moderate pace and hope for the best. How do you deal with MUPs?
Labels: trails