An Igleheart and a 'Sex Hub' 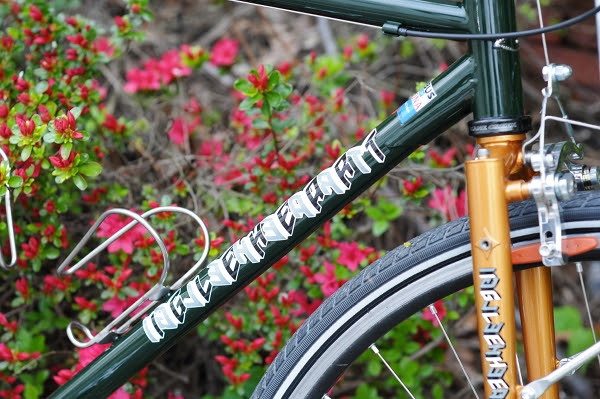 At the New England Bicycle Expo a couple of weekends ago, I had the pleasure of meeting legendary New England framebuilder Christopher Igleheart and briefly test riding one of his bicycles - an upright commuter model called the Yoyodyne. One cool thing about this bike - aside from it being an Igleheart - was the 3-speed Sturmey Archer S3X hub - aka "the sex hub." Several people I know have set up their bikes with this hub and their feedback has been intriguing, so I wanted to try for myself. And what better way than on an Igleheart bike? 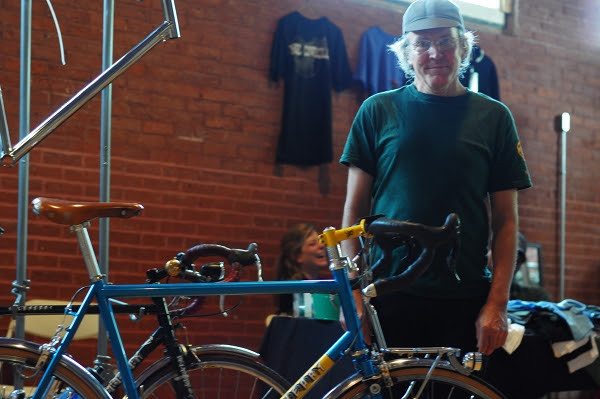 Located just North of Boston, Mr. Igleheart - like many local builders - traces his professional beginnings to the legacy of Fat City Cycles, where he started as an apprentice welder in the 1980s. By 1994 he had established Igleheart Custom Frames as an independent operation, spcialising in TIG-welded steel. In the chaotic environment of the Bicycle Expo, a sense of calm presided over the crowded Igleheart booth. The man is very comfortable with his work and discusses it in a way that communicates his experience and versatility. Road bikes, mountain bikes, transportation bikes and even randonneuring bikes - he knows them all, executing them in his distinct aesthetic. 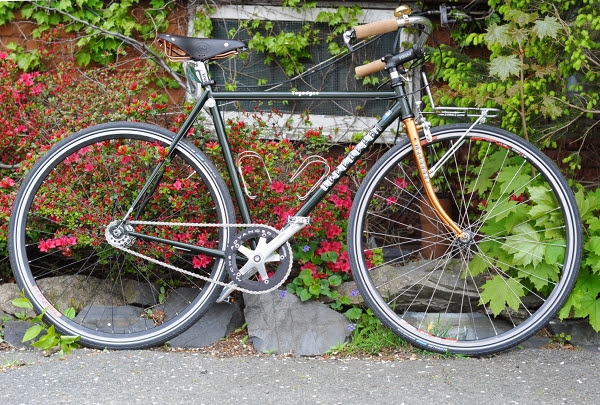 Unfortunately, I somewhat dropped the ball on photographing this beautiful bicycle. The high noon light was unflattering from every angle, the background I chose was too busy, and people kept coming up to ask about the bike and distracting me. The results are washed out and entirely unworthy of the Yoyodyne, so I did what I usually do with ruined pictures: upped the contrast and at least tried to make them atmospherically interesting. 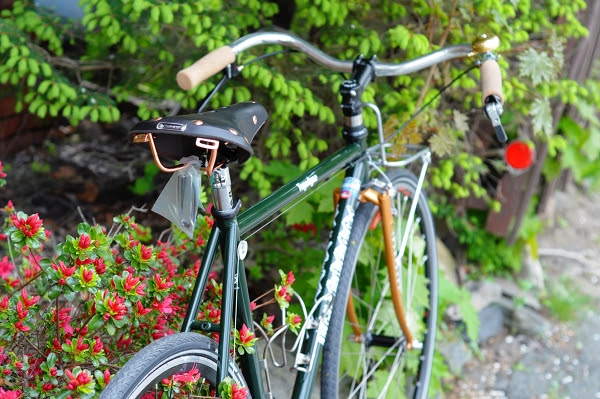 The Yoyodyne is designed as a fun and comfortable city bike. This particular one has a green frame and an orange fork, which is an unexpectedly pleasing colour combination. 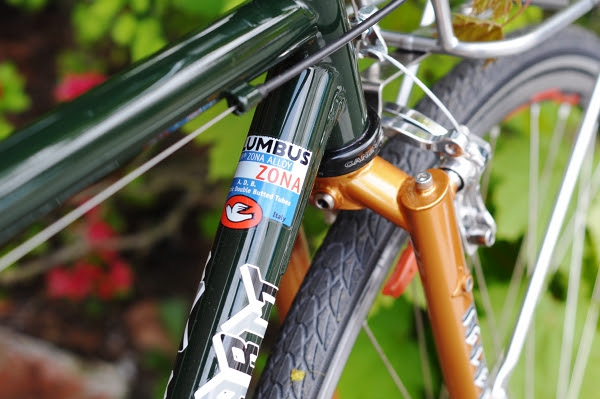 Columbus Zona is a comfortable all-around tubing that contributes to a plush ride quality. The welds are very cleanly done. The segmented fork is one of my favourite fork designs and I never tire of its various iterations from different New England framebuilders. 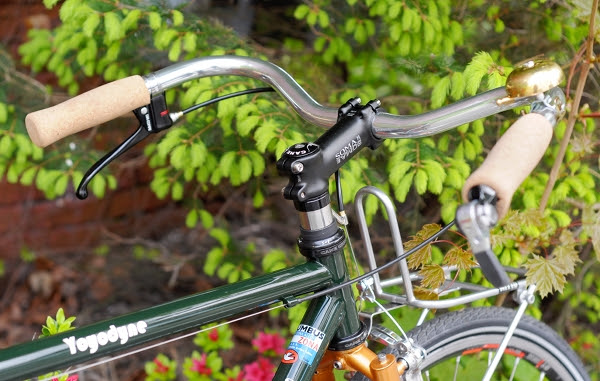 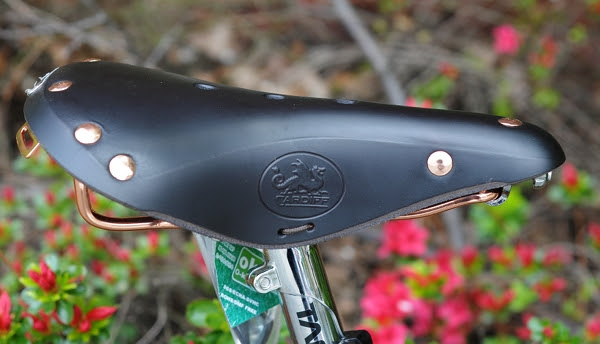 Cardiff leather saddle with copper rivets. You can't see this very well here, but the seat post has a special feature that allows the top of it to be easily detached and reattached, without having to re-adjust saddle position. 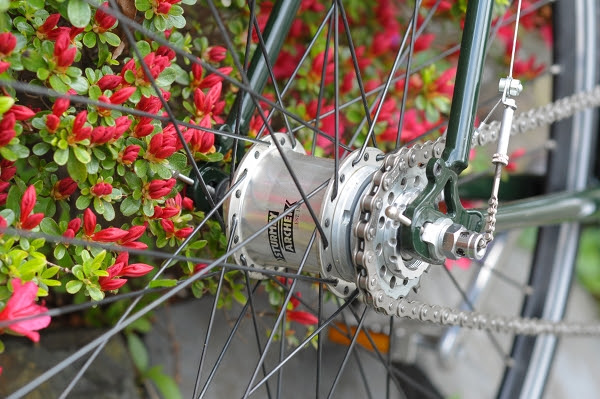 And of course, the exciting 3-speed fixed gear hub. A testament to just how distracted I was, I even failed to capture the "S3X" label. It's on the other side. 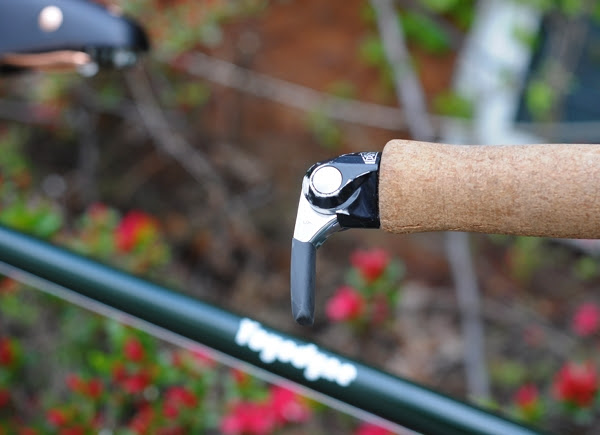 Sturmey Archer has a new gear shifter for 3 and 5-speed hubs that is versatile in that it can be used both on upright and drop handlebars. I found it a little difficult to budge in comparison to the traditional trigger shifter, but perhaps that can be adjusted. 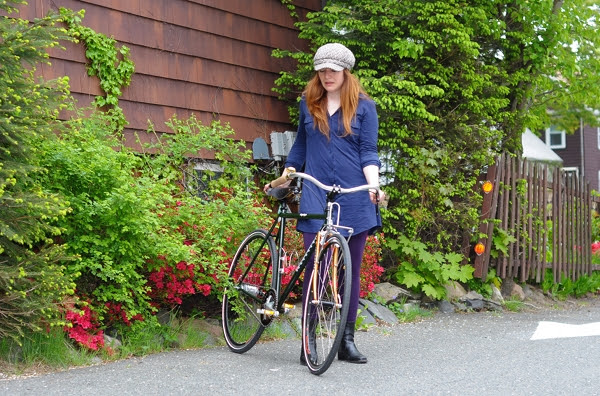 It's difficult to properly test ride a bicycle at a crowded Bike Expo, but I made a half dozen laps on it around the large parking lot in the back of the building, as well as cycled up and down the long driveway a few times. With a constant stream of cars coming and going it was like a slower version of actual urban cycling.
The ride quality of the bicycle felt familiar as soon as I began pedaling. Cushy and easy to handle, it was not unlike a vintage Raleigh Sports - only more responsive, 1/3 of the weight, and made of far nicer tubing. I would feel comfortable riding it in city traffic. However, I would need a longer test ride to determine how it handles potholes at speed.
All of this struck me before I remembered about the bike being fixed gear. What I mean is that usually the fixed-gearness of a bicycle tends to dominate my impression of it, but here this was not the case. It felt more like a comfortable 3-speed, on which it just so happened that I didn't coast. This could be due to the bicycle's handling, or it could be due to the hub. 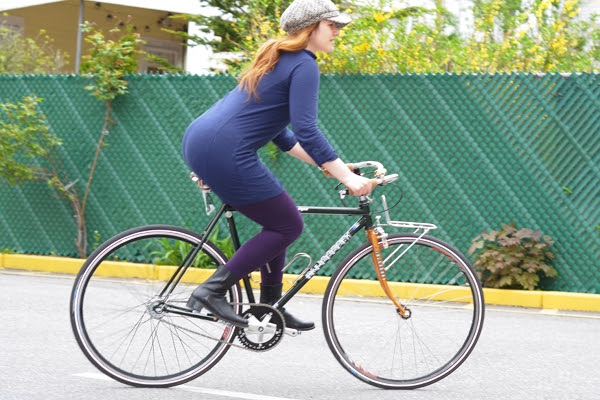 The ride with the S3X hub felt interesting, but I would say not entirely like a fixed gear bike. When I ride a single speed fixed gear, there is more to the sensation than merely not coasting. I feel like I have a direct connection to the drivetrain, and for me that is part of what makes riding fixed gear bikes enjoyable. This aspect is gone with the S3X: It basically feels like a nice 3-speed hub that does not allow you to coast. Shifting is easy and the gear spacing is just about perfect, but no matter what gear it is in, the feeling is not quite the same as single speed fixed gear.
One thing you have to watch out for with the S3X is that if not adjusted properly, the hub can "space out" and go into coasting mode for a millisecond's time at the end of each pedal revolution. Several people I know who've installed the S3X hub report this, and I experienced it as well - which makes me think that the adjustment has to be extremely precise in order for it not to happen.
While I like 3-speed hubs and I like fixed gear, I am not sure that the combination is for me, as it introduces a degree of complexity into both categories. But I still think it's a neat idea, and I am glad I tried it. In future, I hope to have the opportunity to learn more about Igleheart bicycles and to take one on a longer test ride. Many thanks to Mr. Igleheart for allowing me to ride the Yoyodyne!
Labels: bicycle reviews framebuilding product reviews test rides