3 Wheels and a Box: the Christiania Cargo Trike 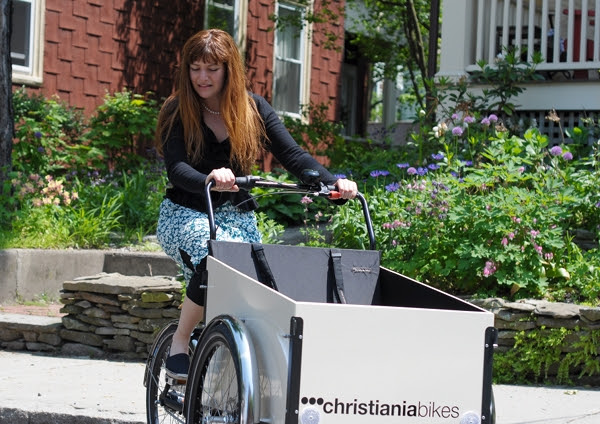 If you've been hoping for a change of pace from the recurring roadcycling theme, your wish is granted. Yesterday I had a visit from Will of BoxCycles - an importer of European utility bicycles whose warehouse is not far from Boston. The purpose of the visit was to drop off one of these - but more on that later! In the meantime, he was also delivering this Christiania cargo trike to someone local, and I had the opportunity to try it. 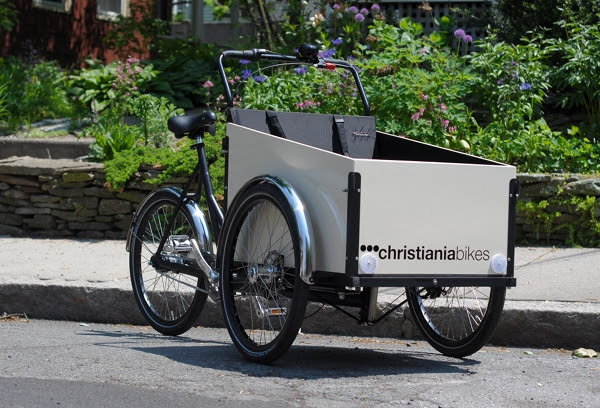 Christiania Bikes have been around since 1976, initially as a small workshop in the Freetown Christiania neighbourhood of Copenhagen, Denmark. If you do not already know the history of this unusual neighbourhood, it's worth looking into - very interesting stuff. In addition to Christiania bikes, the modern incarnation of Pedersen began there as well. Having over time expanded, Christiania now has a factory on Bornholm Island. Their cycles remain manufactured, finished and assembled by hand - the most popular model being the cargo trike shown here. 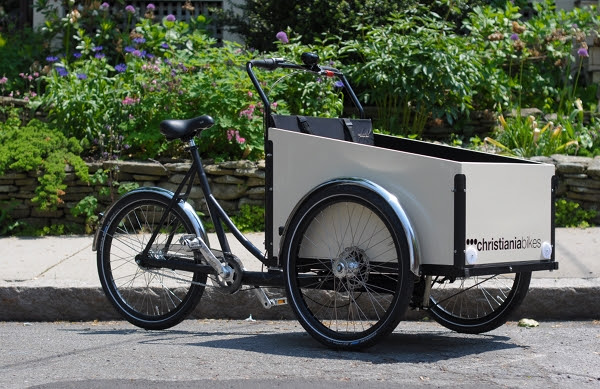 Though I occasionally see cargo trikes both in Europe and in the US, this is the first time I've examined one so closely. The Christiania is a heavy-duty welded aluminum frame with three 24" wheels: two in front and one in rear. The cargo box is positioned between the front wheels and the cyclist steers with it when turning.  The box is plywood, and there are several models available in different widths and lengths. This trike is 82" long and 34" wide, weighing 75lb when empty. It accommodates 100kg (220.5lb) of weight can can be used for anything from hauling cargo to transporting children. 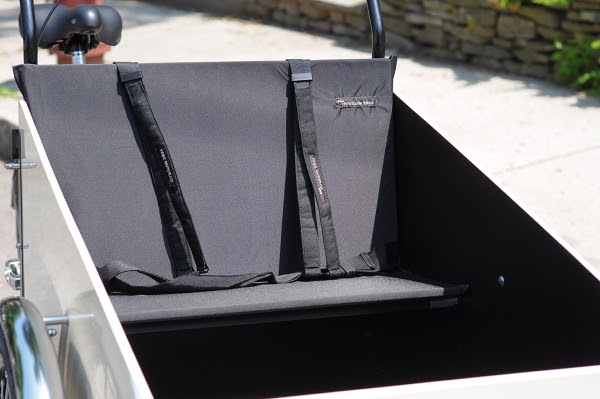 Inside the box is a bench with padded seat cushions and two sets of seatbelts. Given the weight capacity, this trike can easily fit several children, or even an adult or two. 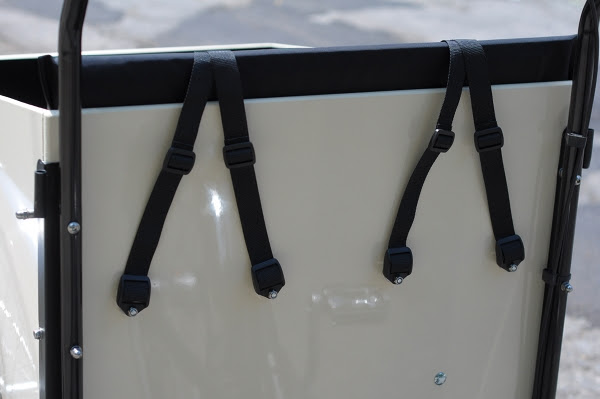 Seatbelt attachment points on the back of the box. 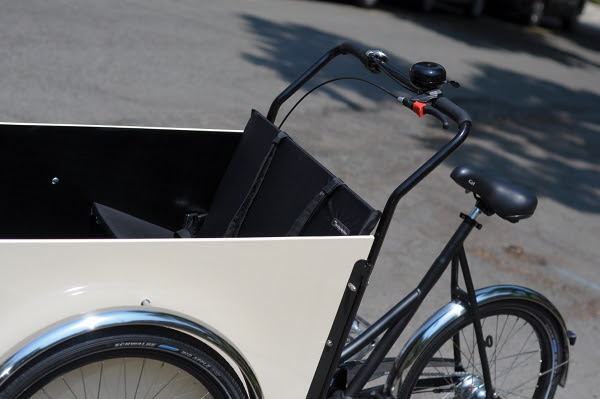 The handlebars are not really handlebars at all, but more like a pram or shopping cart handle. 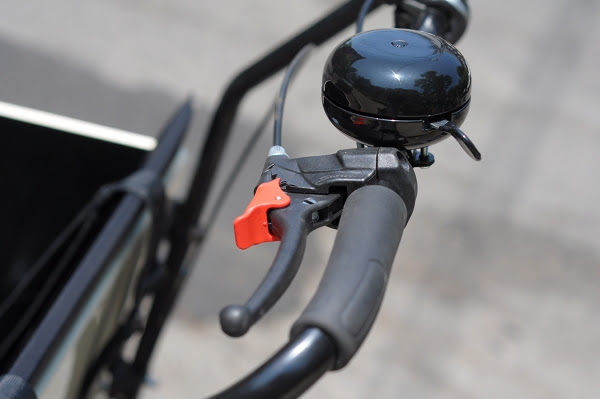 The lefthand side is set up with a front brake lever, parking brake and bell. A parking brake is necessary with a cargo trike; without one it will roll down even the tiniest inclines. 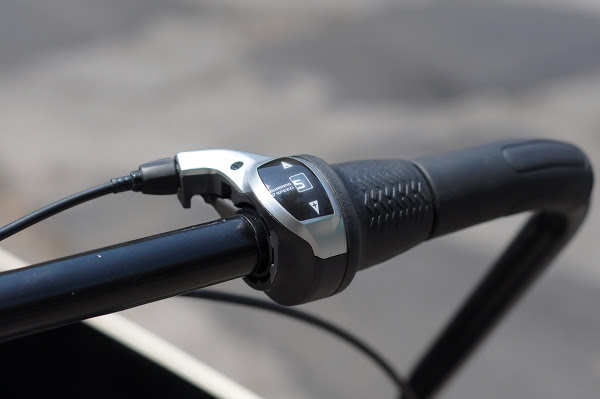 The righthand side is set up with a gear shifter. The trikes are available as either 7 or 8 speeds. 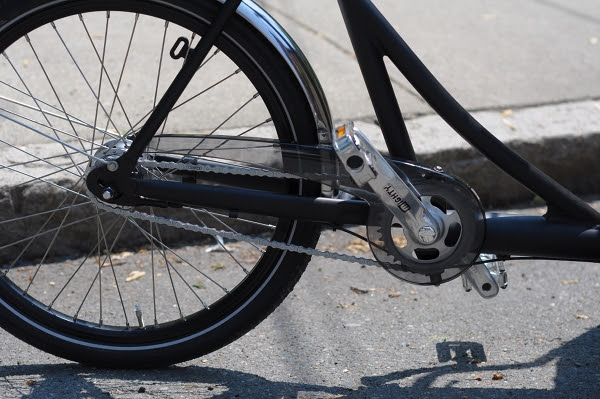 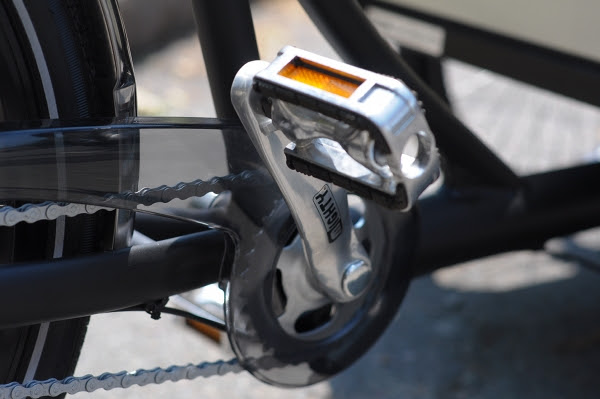 The chainguard provides good coverage, though it is not a full chaincase. 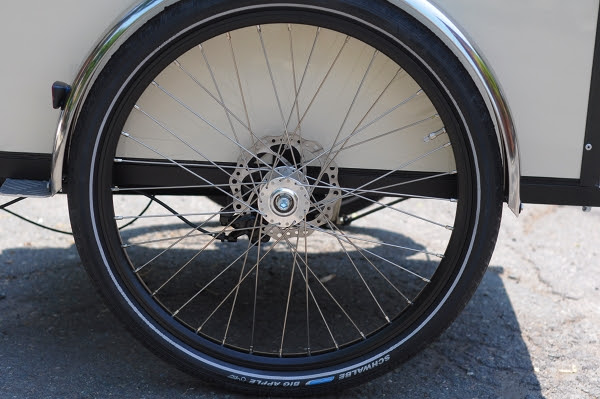 The front wheels are set up with disk brakes, which are activated by the hand lever. Tires are Schwalbe Big Apple. 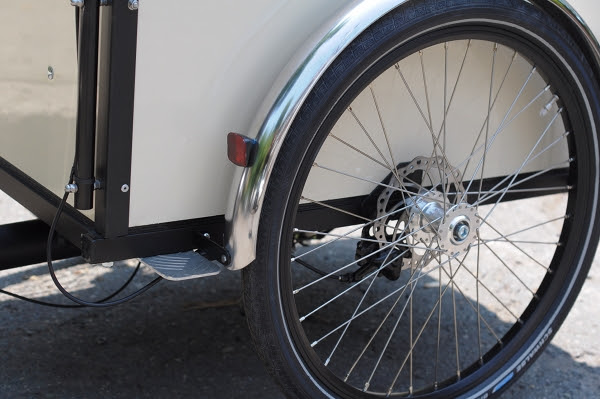 Rear reflectors are affixed to the fenders of each wheel. A dynamo lighting package is available with his model, using a bottle generator on the rear wheel (you can see the attachment arm for it here). 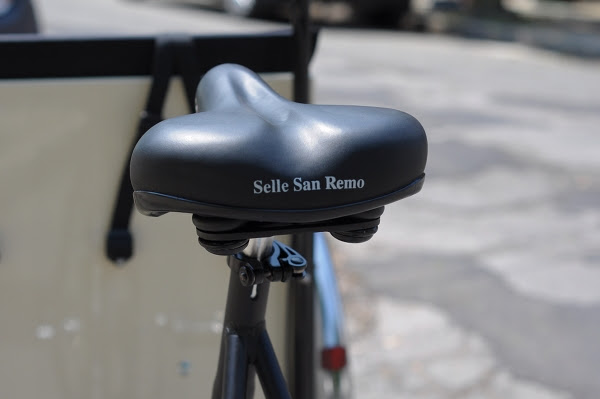 The stock saddle is a plushy vinyl Selle San Remo. 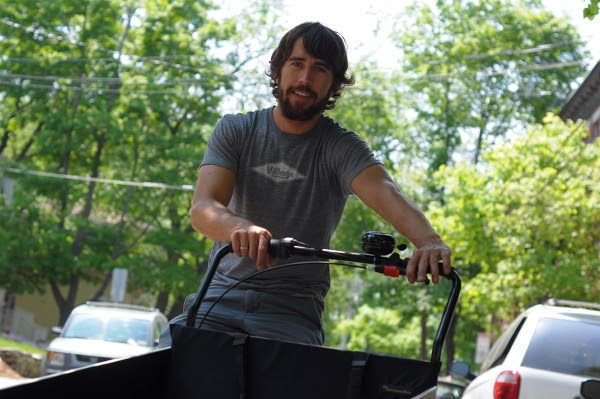 I rode the trike briefly and clumsily, so I better use the pictures I took of Will to show you how it works. To operate the trike, you basically need to point the box, using that one long handle, in the direction you need to go. This sounds simple enough, but if you've never ridden this kind of trike before it is completely counter-intuitive. The other thing that takes getting used to is that when turning, the box pivots on its axel and becomes parallel to the cyclist - not unlike a swing bike! 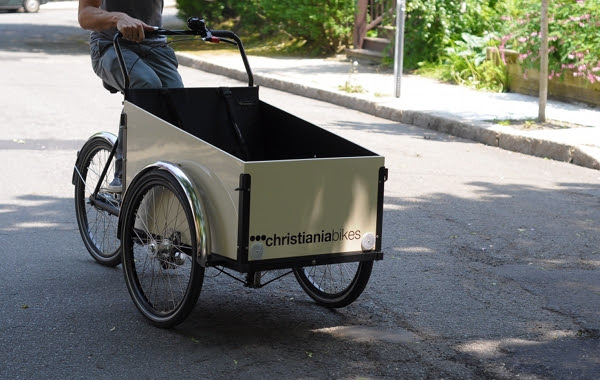 Watch this: Here is the trike going straight. 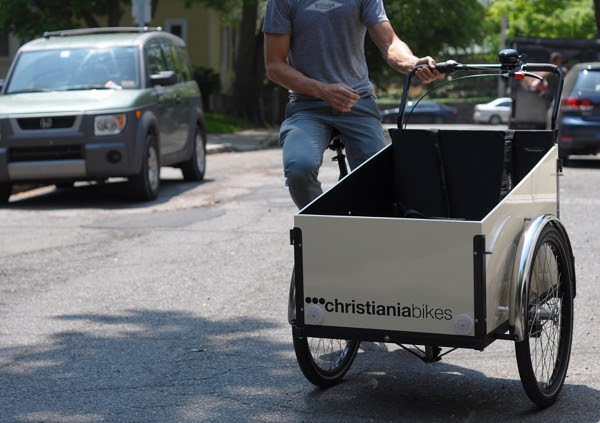 And here is what happens when turning. Crazy! 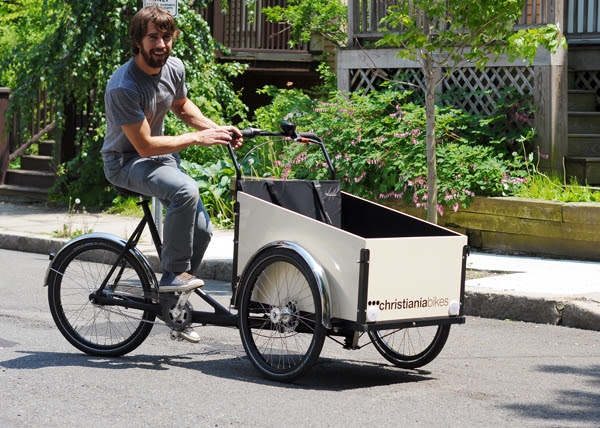 Those who own one of these trikes say it takes about a day to get the hang of the steering, but that once you do it becomes second nature. While I have no experience with other trikes, there is a nice test ride report on Suburban Bike Mama where she compares the Christiania to her own Sorte Jernhest. I've also seen a couple of Christianias around Boston at this point, and the owners seem pretty adept at steering. 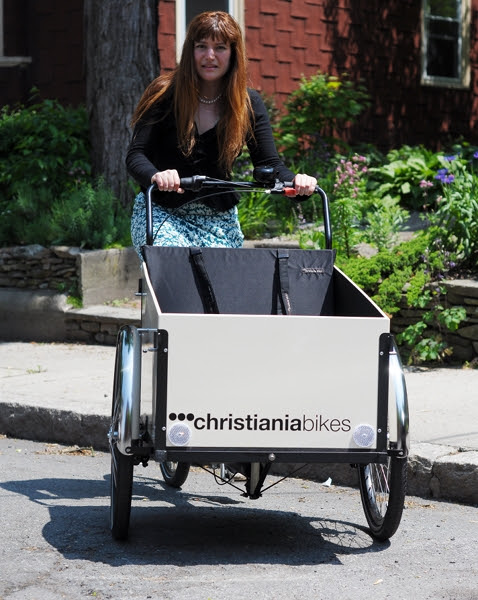 If we continue to live without a car (which at this point seems likely), it is possible that I may want to get some massive cargo hauling contraption in the future, which is why I was curious to test ride one of these. One thing that surprised me about the unloaded Christiania is how light it felt. I expected the trike itself to be heavy and clunky, but it has an almost airy feel to it without cargo. It rolls easily, including up the mild incline of my street. Once it is filled with 100lbs of stuff I am sure the handling will be different, but it is nice to know how the trike behaves on its own as well. Making turns felt wild and tippy, but also a lot of fun. Since others are able to grasp it in a day, I am sure I would as well. My one source of ambivalence toward the Christiania, is that it seems designed specifically to transport children, which is not what I would need a cargo bike for. It's not only the benches (which I am sure are optional), but also that long handle and something about the general look that, to me at least, makes it resemble a giant pram. I can just imagine using this trike to carry equipment and being constantly asked how many kids I have. Having said that, I think that most people considering a cargo trike like this do in fact plan to transport children, which would make what I am describing a good thing. If drivers see you on the road and think "baby carriage!" they will probably be more careful and will give you more room.
Front loaded box cycles - be they two wheeled bakfiets or cargo trikes - are a radically different experience than riding a standard bicycle, but they also offer a radically different degree of utility. As more people are looking at transportation cycling as a normal and viable option, cargo bikes of all sorts are becoming more popular and I love seeing them on the streets. Maybe a couple of years from now, I will be riding one to the hardware store and writing about it here.
Labels: cargo bikes test rides