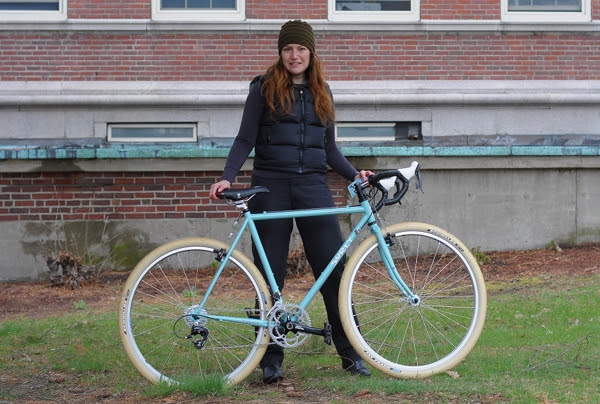 What's this... another test ride? a new bike? As a matter of fact, it's a bit of both! A new bike for a certain someone, and a test ride for me as reward for tagging along. And it all began will a spare wheelset... 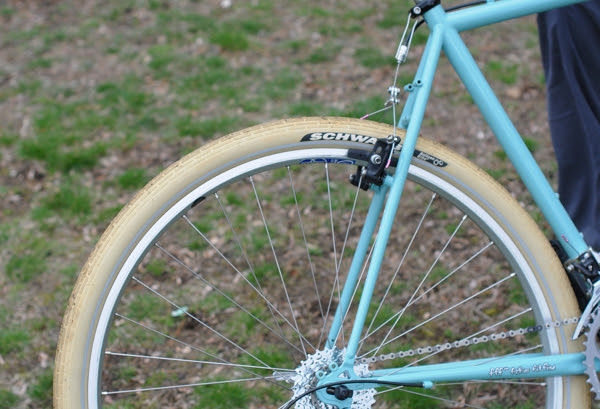 As part of my brisk trade of hats for bicycle parts over the winter, I've acquired some neat items - including parts I did not necessarily have any use for. Among these were a mint condition handbuilt wheelset and a pair of equally mint Schwalbe Fat Frank tires in 700C. Yes, 700C and not 26" - a monstrous size which made it exceedingly unlikely that I would find a host for them. After coming to that conclusion, I was about to put them up for sale - when I noticed the Co-Habitant looking at them longingly. Upon some prodding, he confessed to harboring a desire for an off-road bicycle with just such a wheelset and tires. Okay then: I wouldn't sell them. But where would we find a frame to fit them? The Fat Franks are 700C x 50mm, limiting the choice to 29er mountain frames, a couple of Rivendell frames, and, of course, custom frames. The latter two options were out of the question, as he decidedly did not want this to be an expensive project. And he didn't want a 29er mountain bike, because he dislikes sloping top tubes. After some feverish research, we discovered that Surly could be an option, and headed to Harris Cyclery (a sponsor) with our own wheels and tires in tow. 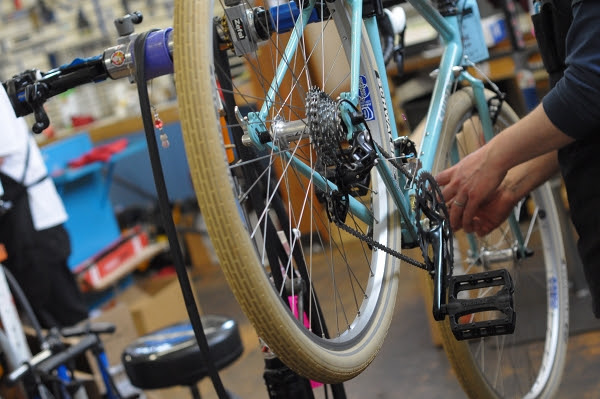 The 700C Fat Franks will fit the Surly Cross Check and Long Haul Trucker. We are 60% sure that it is possible to squeeze fenders in there as well. There are not many fender options for tires of this size, but Berthoud and SKS could be possibilities. Any experiences with them with this bike and tire combo? 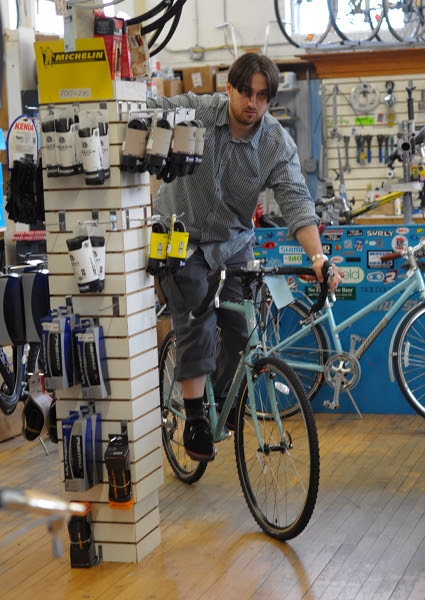 To spare you the suspense, the Co-Habitant is getting a 62cm Surly Cross Check frame, in robin's egg blue - or rather I am getting it for him. We will pick up his actual frame on Saturday. Above he is riding the floor model, with the original wheels and tires. 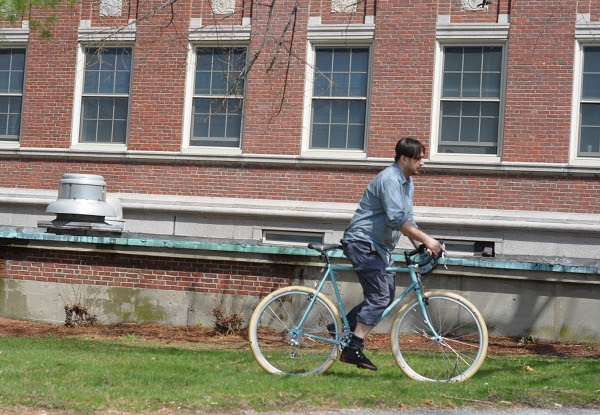 And here is the same bike fitted with our wheelset and the Fat Franks. 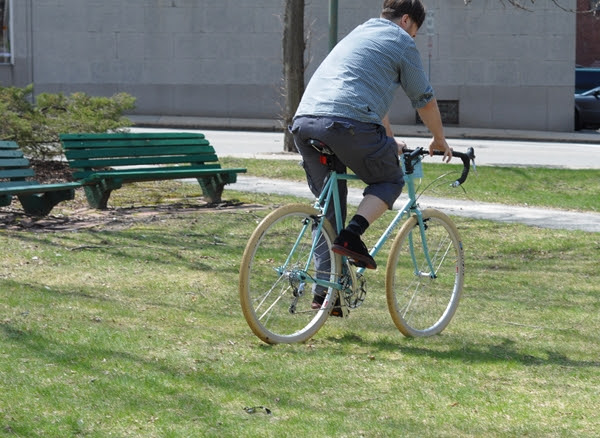 The difference between Surly's Long Haul Trucker and Cross Check models, is that the former is a heavy-duty touring frame, while the latter is a more versatile cyclocross frame - which can be used for anything from commuting, to racing, to off-road, depending on how it is set up. The Cross Check has shorter chainstays and lighter tubing than the Long Haul Trucker - which suits the Co-Habitant fine, as he wants a tough, yet lively ride and does not plan to transport bulky loads on this bike. 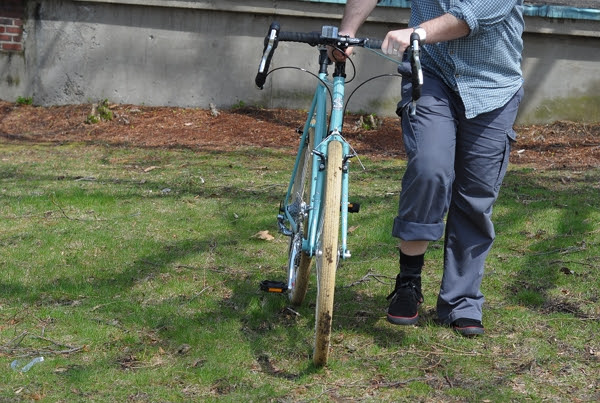 It did not take him long to decide that he likes the Cross Check. At around $400 retail for the frame, and many of the needed components already in our possession, this is going to be a quick and exciting build - just in time for our very tardy Spring! Lord knows the boy is long overdue for a new bicycle - and if a Surly is what he wants, I am happy to facilitate. 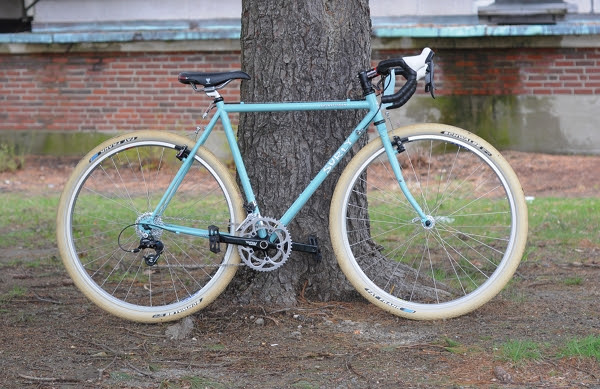 While the Co-Habitant was consulting with fabulous and wise mechanic Jim about the build, I was not idle. As luck would have it, Harris happened to have a 54cm floor model of the same bike in stock, and I seized the opportunity to test ride it. I've wanted to try a Surly for some time, and what better way to do it than with these delightful tires? Surly frames are TIG-welded cro-moly steel with lugged fork crowns, and they accept threadless headsets and stems. Still, in their overall look the bicycles are fairly classic, with comfortable, relaxed geometry. 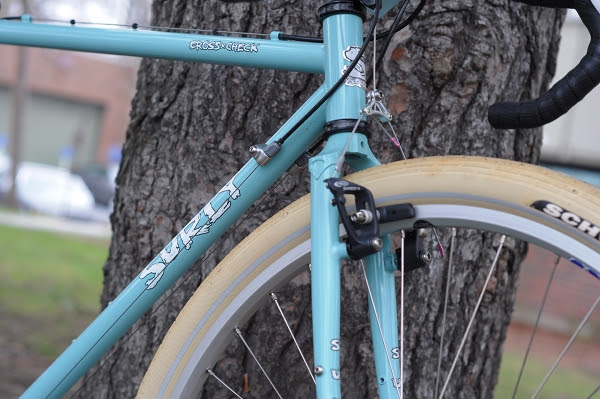 Overall, it's a simple, tidy construction. The canti-lever brakes and numerous braze-ons are useful, without looking cluttered as they do on some utilitarian bikes. I think the powder blue colour is good for this bike - softening up and adding interest to Surly's rugged, no-nonesense aesthetics. 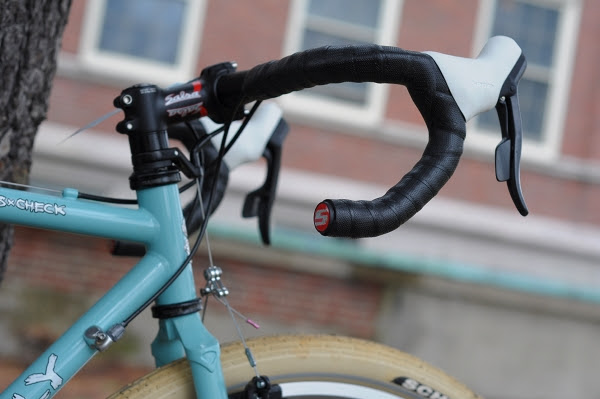 As far as welds go, these are pretty clean. I prefer lugs on this type of bike, but the Co-Habitant likes a variety of frame construction methods. 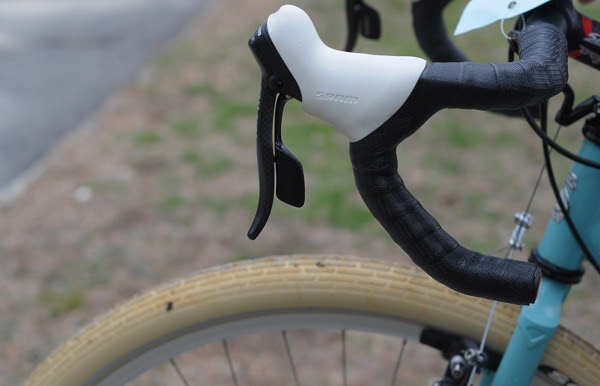 The floor model I rode was fitted with Salsa stem and handlebars and SRAM "brifters." I found the shape of the handlebars to be quite comfortable - with roomy "shoulders" just like Nitto Noodles. The brifters were all right and squeezing the brakes was easy enough. Compared to regular aero brake levers, I find these combination levers to be too clunky - my grip can't comfortably close around them and I feel as if one bad bump can send my hands flying off the handlebars. Still, over time I think I could get used to them. If I were ever to get a modern roadbike, I would be fine with this type of set-up. 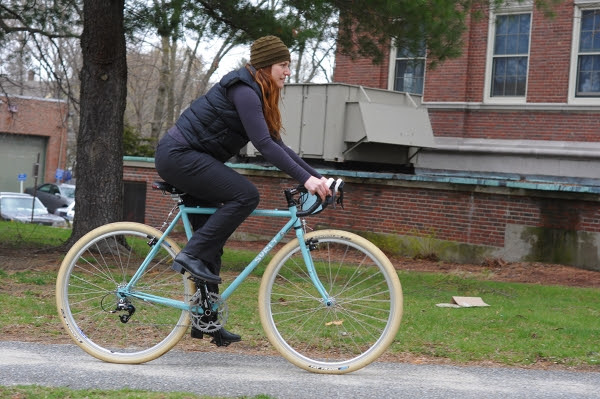 Riding the Surly Cross Check was a better experience than I had anticipated. One common criticism of Surly bicycles, is that they are sluggish and stiff - but perhaps that applies to the Long Haul Trucker specifically and not to the sportier models such as the Cross Check. Giving the tubing differences at least, that would certainly make sense. I did not test ride the bike extensively, as we did not have a great deal of time and it began to rain heavily. But on first impression, the Surly felt similar to my Rivendell in its stability and comfort. As a roadbike, it felt "easy" to ride and it could be a good choice for a beginner for whom a Rivendell is too pricy. On the 54cm frame I rode, there was considerable toe overlap with the 700C x 50mm Fat Franks, so I would not recommend tires this huge on small frames. But on a larger frame like the 62cm size the Co-Habitant is getting, it's not a problem.

The Surly Cross Check strikes me as a versatile, comfortable, attractive, and reasonably priced bicycle that straddles the border between classic and modern. It is also fairly easy to get and test ride: While some shops have more floor models than others, chances are that your local bike store carries Surly. If you do not object to a TIG welded frame and a threadless stem set-up, this is probably one of the best values out there. The Co-Habitant's build will be modestly classic and I hope to share the final result shortly. Any owners of the Surly Cross Check out there?
Labels: bicycle reviews Co-Habitant diamond frame Surly tires