Soma's Fab in 650B! A Test Ride of the Buena Vista Mixte 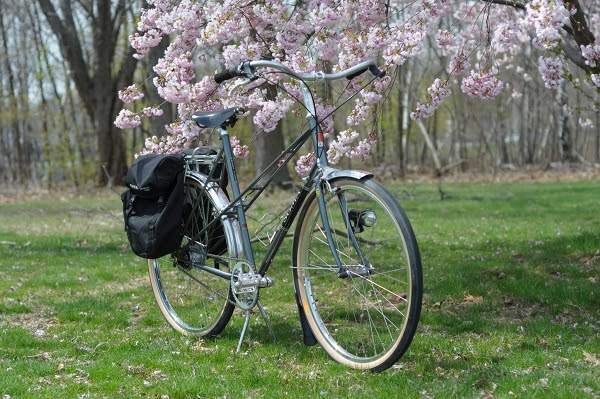 Last week I had the pleasure to extensively test ride a Soma Buena Vista mixte that our fellow bicycle-obsessionist Somervillain has just built up for his wife. This test ride was a rare opportunity that I gladly seized. First off, Soma only sells frames and not complete bikes, so finding a way to test ride their models is difficult. Moreover, this mixte is an especially rare specimen, as it is built up with 650B wheels. And finally, I was allowed to borrow the bicycle for an entire day - which, of course, was much more informative than a brief test ride. I hope this will be of use to those considering this bicycle. 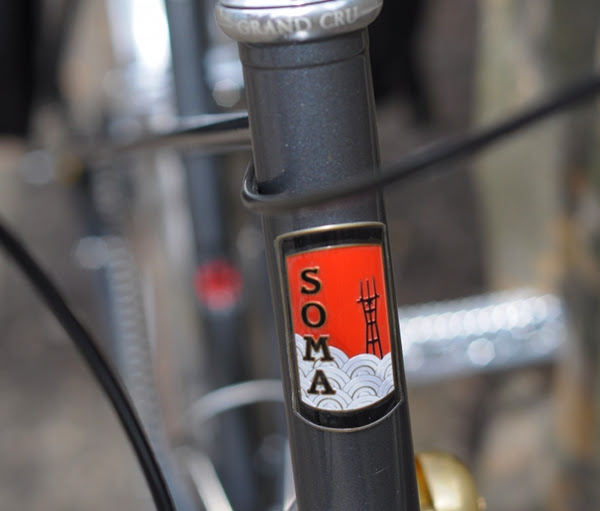 Soma Fabrications is a small manufacturer of bicycle frames and components based in San Francisco. Their Taiwanese-built frames are steel and more or less classic, with modern elements. The Buena Vista model is a TIG-welded mixte with twin lateral stays, available in four sizes from XS (42cm) to XL (58cm). It is a versatile frame with "sports touring" geometry that can be built up either as a roadbike or as a city bike, either with a derailleur or with an internally geared hub, and either with 700C or with 650B wheels. 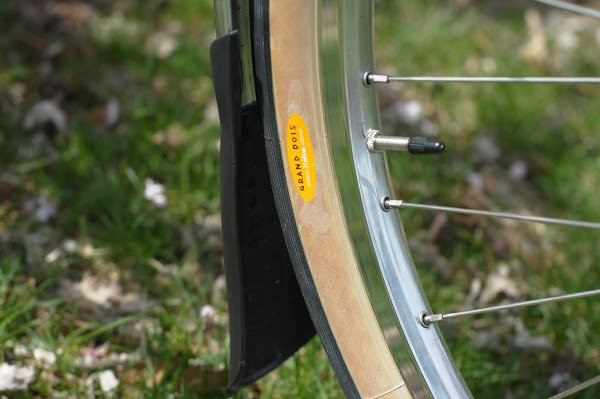 Though a 700C build is by far the more typical, Somervillain fitted this bicycle with 650B wheels. The 650B size allows for wider tires - specifically the fantastically cushy Grand Bois Hetres, which make for a very comfortable ride. Soma specifies a maximum 38mm tire width for 650B wheels on the Buena Vista, but their estimate is overly conservative: The 42mm Hetres fit fine, including fenders. That is a useful piece of information for those who like wide tires and are choosing between, say, the Soma Buena Vista and the Rivendell Betty Foy. These two frames allow for the same tire width. 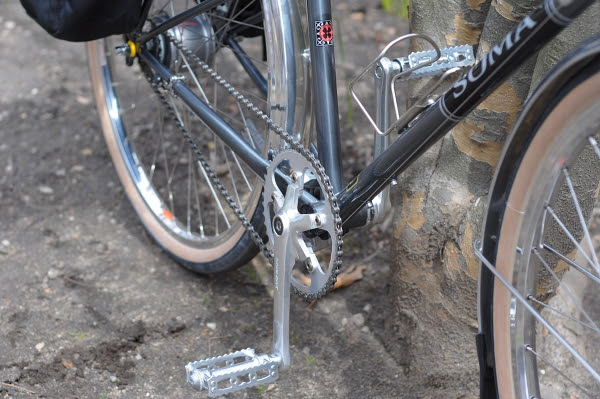 An additional benefit of using 650B wheels on the Soma, is that it is a useful trick to eliminate toe overlap - at least on the 58cm frame. Keep in mind also that when you put 650B wheels on a frame, you can go with a larger size than what you normally ride. While a 58cm frame is usually too big for me, I was able to fit this one because of the 650B wheels. 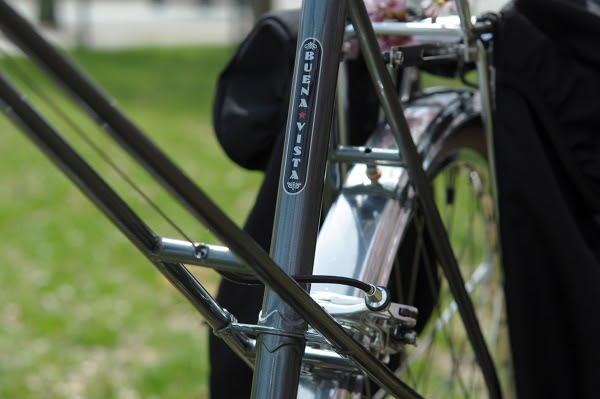 The Buena Vista is available in white or graphite, and this bicycle is obviously the latter. The graphite is a dark silver colour with some depth to it, not unlike a Tahitian pearl. The Soma headbadge and decals are embellished with splashes of red, which I think complements the frame nicely. 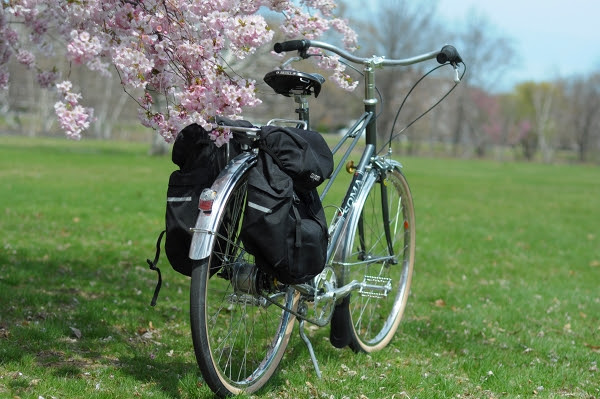 Gray and silver frames can be tricky to accessorise, and personally I prefer them paired with warm tones. This bicycle is fitted with all black accessories, which gives it a sporty/stealthy look. Ultimately, these choices are a matter of personal taste. 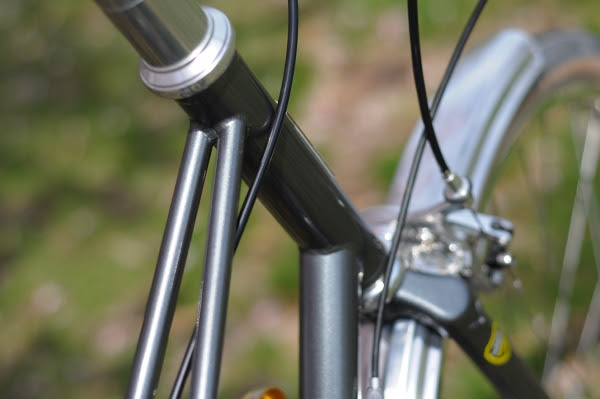 The Buena Vista frame is mostly welded, with the exception of the lugged fork crown and a few lugwork-like details - such as the connector between the stays and the seat tube. 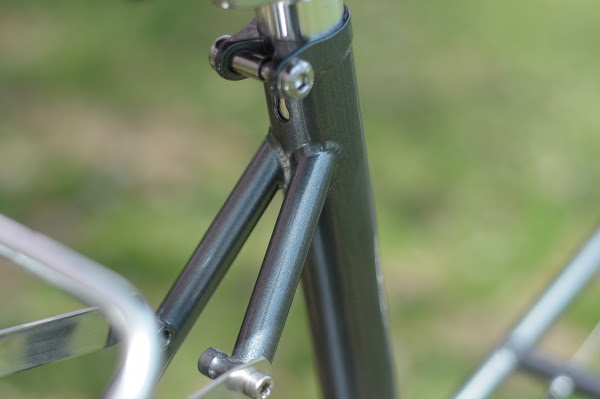 The welding is relatively clean, though not quite as clean as on the Surly frames we recently examined. I think that welding marks are more noticeable on a mixte than on a diamond frame, simply because there are more joints to connect. 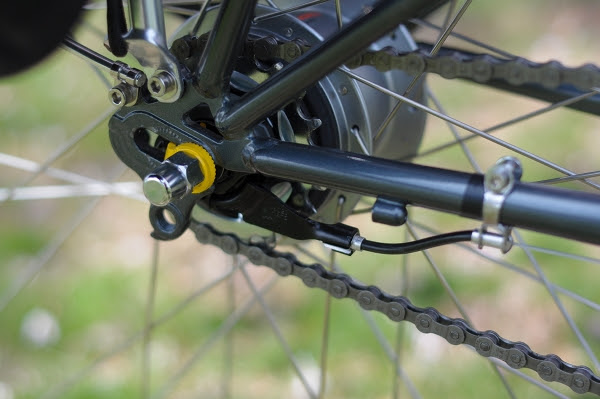 The horizontal dropouts are what makes the Buena Vista frame compatible with both derailleur and hub gearing. There are braze-ons for both racks and fenders. 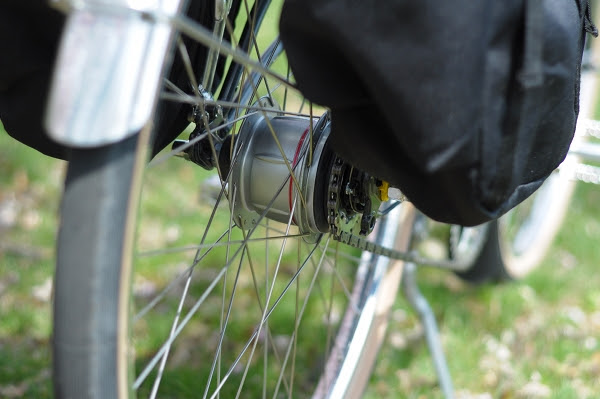 The wheelset is from Velo Orange, built around a Shimano Nexus 8-speed hub. 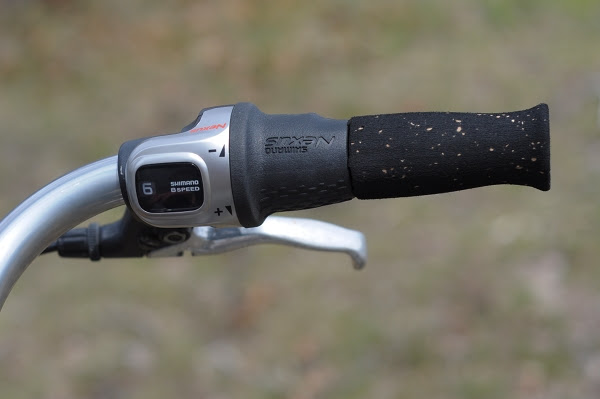 This particular twist shifter is unobtrusive and easy to use. 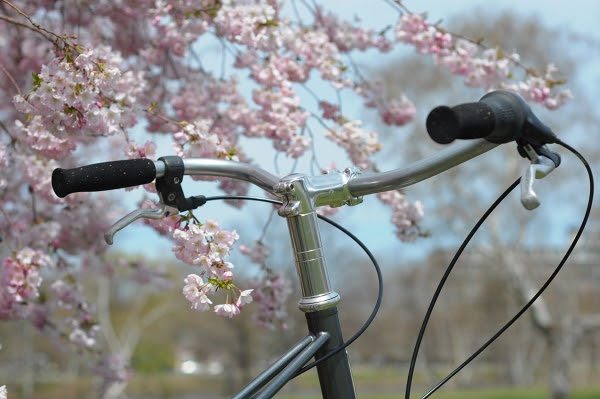 The Nitto Albatross handlebars are set high with the help of spacers - the stem being threadless. Vintage Shimano levers activate the long-reach caliper brakes. 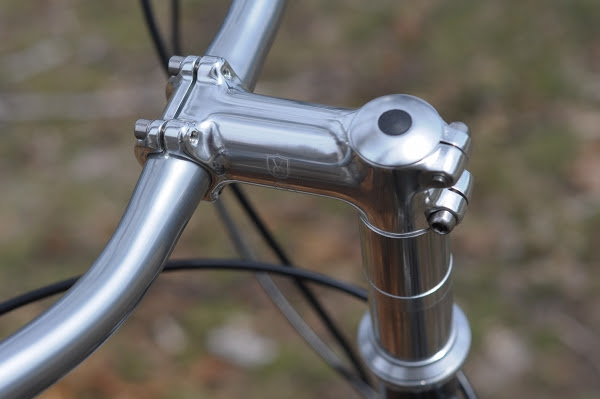 Close-up of the Velo Orange threadless stem with spacers. 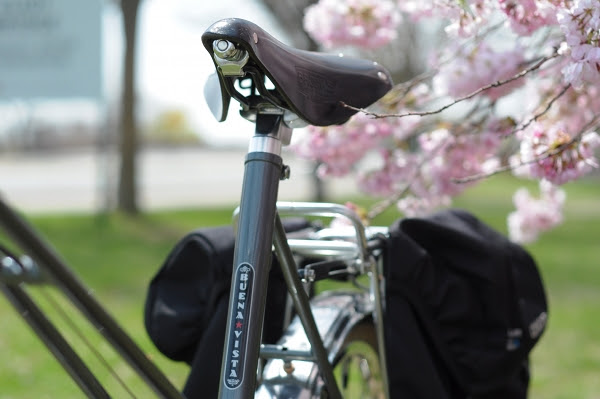 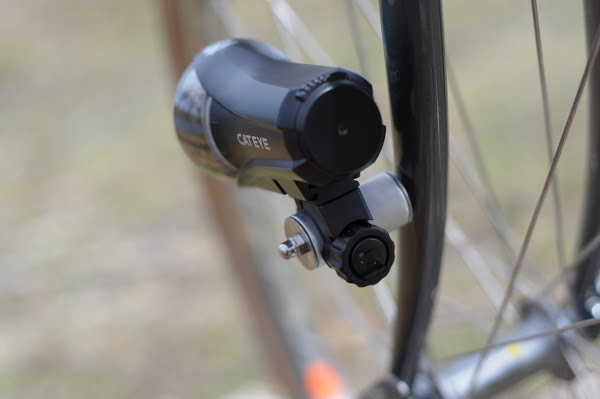 Battery-operated CatEye headlight, attached to the fork blade via a DIY mount. 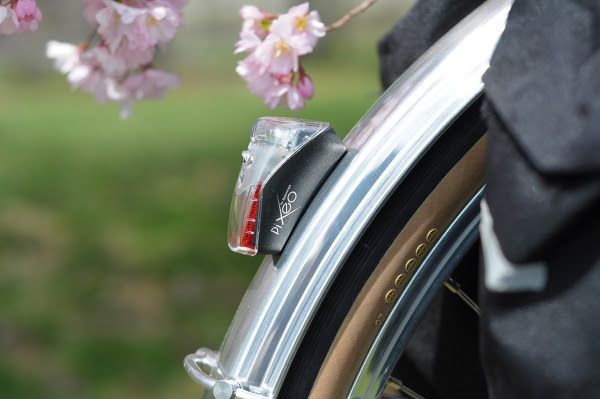 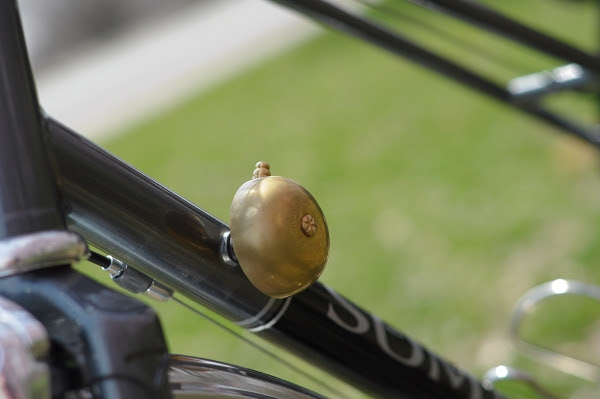 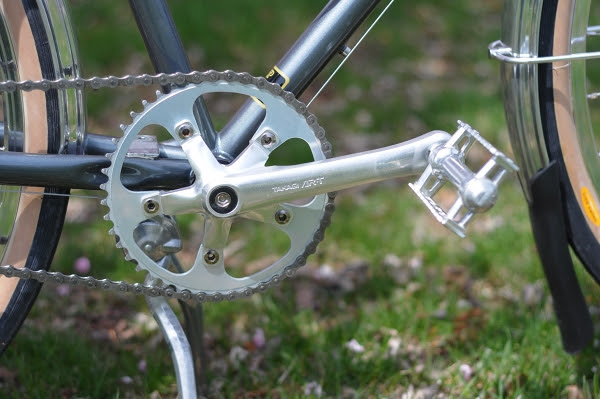 Vintage Takagi crankset, chosen for its ability to accommodate a Porteur-style chaincase that this mixte may be fitted with at a later stage. 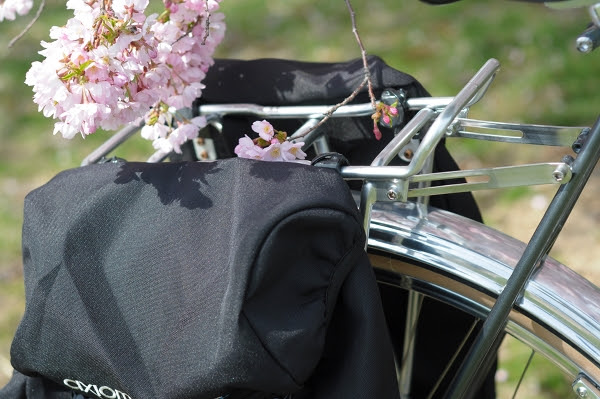 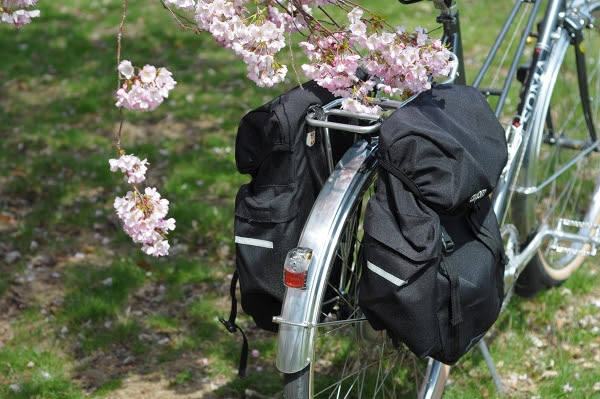 And a set of Axiom panniers, mounted permanently to the rack. Velo Orange fenders and Planet Bike mudflaps finish off the build.The total weight of the bicycle with this build is 28lb not including the rack and panniers, and 35lb including them. The significant difference is due to the hefty nature of the proprietary Burley rack, which was a must as Mrs. Somervillain will often commute with one of the children. 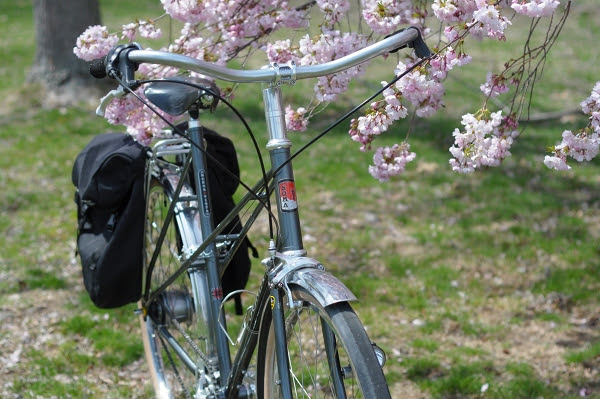 This particular Buena Vista was built up as predominantly a transportation/ utility bicycle, to be ridden mainly within greater Boston - while at the same time offering sufficient versatility to handle longer, recreational rides. Hub gearing was chosen for ease of maintenance and an upright posture was chosen for comfort - with the mixte's roadish geometry still offering sufficient speed and maneuverability. 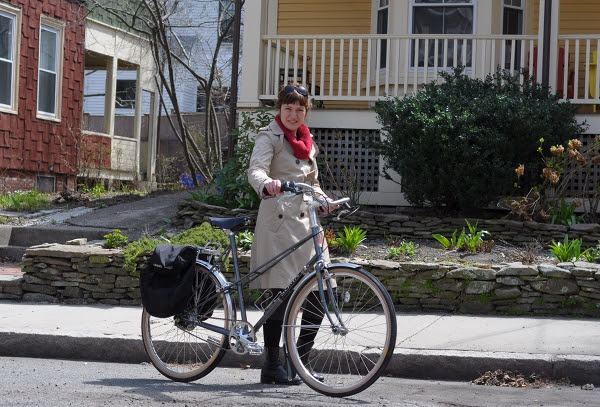 I was in possession of this bicycle from 8:30am until 5:30pm on a weekday. During this time I rode it for transportation to various destinations, then took it on a 12 mile ride along the Charles River Trail towards West Newton and back. All together, I probably rode the Buena Vista for a total of 17 miles.

Based on Soma's online description, I expected the handling to be aggressive - but it was not. It did not handle like a "converted roadbike" as some mixtes do, but like an actual upright city bike. Given that I had the saddle lower than Mrs. Somervillain, the handlebars were too high for my taste and the front end felt lighter than I like. Still, I felt safe and confident riding this bicycle in traffic right away. The Buena Vista was maneuverable and responsive - but easy to control, and predictable. The frame felt stiff-ish, but the wide Grand Bois Hetre tires took the edge off, making for a comfortable ride on and off road. It must also be noted that this bicycle was put together impeccably - which greatly contributed to my feeling of safety and comfort on it. 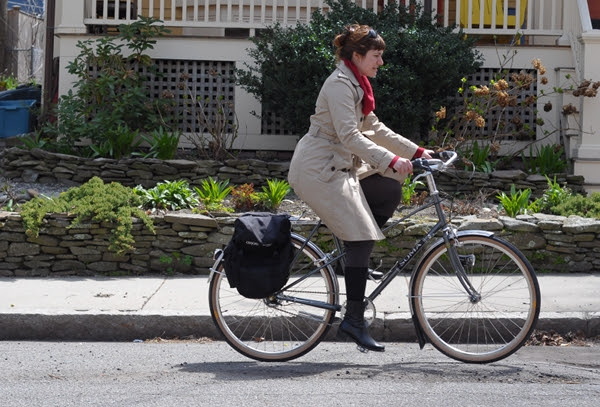 As far as speed and hill-climbing go, I must say that I felt somewhat limited by the overly upright posture and the hub gearing. On flat terrain, I had trouble finding a "perfect" gear on the 8-speed hub and kept shifting back and forth. On hills, I thought the bicycle lost its momentum quicker than is typical for a bike with roadish geometry, and I had to downshift sooner and more frequently than I expected. Perhaps I am simply accustomed to mixtes that are set up more aggressively, or perhaps there is something about these multi-speed hubs that I find inefficient in comparison to derailleurs. But given how tamely this bicycle handled, I found myself wishing it were a loop frame - so that it would be more comfortable to mount and dismount. At the same time, given its mixte construction, I found myself wishing it were more aggressive, so that I could cycle faster long distance. In a way, I felt like I was neither here nor there - though I imagine others might describe this very same feeling as "the best of both worlds." Of course, it is entirely possible to fit the Buena Vista frame with a derailleur and to opt for an aggressive handlebar set-up, if that is what the owner prefers.

I have test ridden only two other modern-production mixte bicycles besides the Soma: the Rivendell Betty Foy and the Trek Belleville WSD. The Trek is not even in the same universe, and on just about every level I can think of the Soma is a better bike. The Rivendell, on the other hand, is a more comparable bicycle, and I even test rode the Betty Foy in the same frame size and with the same wheel size as the Buena Vista. Though over all, the Betty Foy is a more comfortable ride, the difference is not as great as I had anticipated. The Buena Vista is a bit harsher on bumps, and the stepover height of the mixte stays is a good inch or two higher than on the Betty Foy of the same size. But otherwise, they did not feel like radically different bicycles. 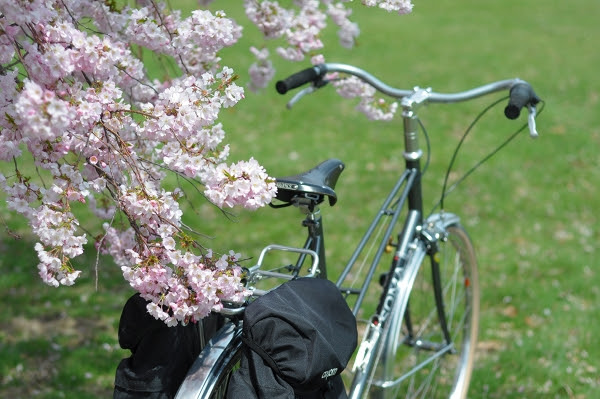 All in all, I found the Soma Buena Vista to be a solidly constructed, versatile frame with comfortable geometry and all the accommodations necessary to turn it into almost any sort of bike you wish. I like the proportions of the 58cm frame with the 650B wheels, though cannot speak for the other sizes. I like the multitude of braze-ons and the wide clearances that allow for my favourite tires. I like the rich graphite frame colour. On a mixte with such classic lines, I dislike the welding and the threadless stem, and for me personally this is a dealbreaker - but I recognise that this is a matter of taste. The Soma Buena Vista frame can be found starting at $400, and a complete bike with a build equivalent to the one shown here could cost as little as $1,200 (see here for the complete build). While everyone's idea of what constitutes "good value" differs, this could certainly fit the bill. More than anything, I recommend this bicycle for those seeking an economical way to build up a bike with 650B x 42mm tires. In that sense, the Buena Vista is a rare and excellent find.
Labels: bicycle reviews fenders mixte Soma somervillain