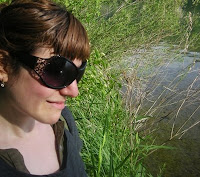 Almost as soon as I began cycling long distance, I realised that sunglasses were a must for me - not only to protect against the sun, but also to shield against insects that seemed to be irresistibly drawn to my lashes. When I rode exclusively upright bicycles, I simply wore my regular shades - preferably large ones that covered half of my face. But as I began cycling faster and on roadbikes, those no longer worked so well. Don't know about you, but I find regular sunglasses to be too heavy and also not sufficiently stable when I attempt to wear them on a roadbike. They bounce, slip, and generally feel uncomfortable - even starting to hurt the bridge of my nose and my temples over time.

As someone who is talented at losing sunglasses, I could not imagine buying those expensive ones that bicycle stores sell in glass displays. Instead, I got the cheap ones from the bin at the register (you know the ones, every bike shop has them). These worked somewhat better than regular sunglasses, but they still slipped and felt painful over time. So this summer I think I am ready for the real deal and would appreciate your advice - as I am sure would others seeking this information. I mainly want them to be as lightweight as possible, so that I don't feel them pressing the bridge of my nose and digging into my temples. And, of course, I also want them to be stable while I am cycling fast on a roadbike. There are so many makes and models to choose from - what do the roadcyclists among you wear?
Labels: comfort roadcycling sun and heat