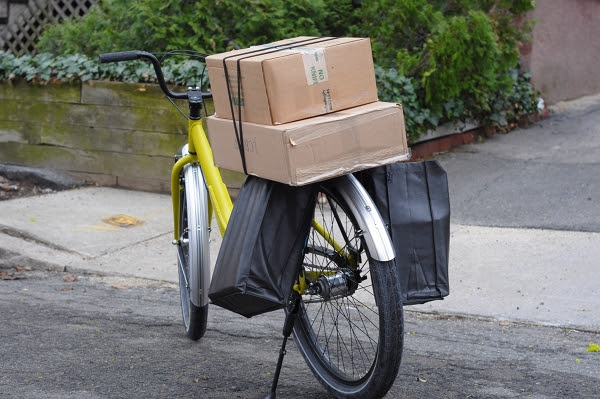 There comes a point in every bicycle blog's existence, when the author feels compelled to show off how much stuff they can carry on their bike as part of some errand for which one might normally use a car. If you think about it, it's impressive that I've held off for this long, so do give me some credit. But I am, after all, only human. And so, my time has come for the self-congratularoty "cargo hauling" post. Keep reading or close your browser in disgust, as you please - but yeah, it will be one of those. 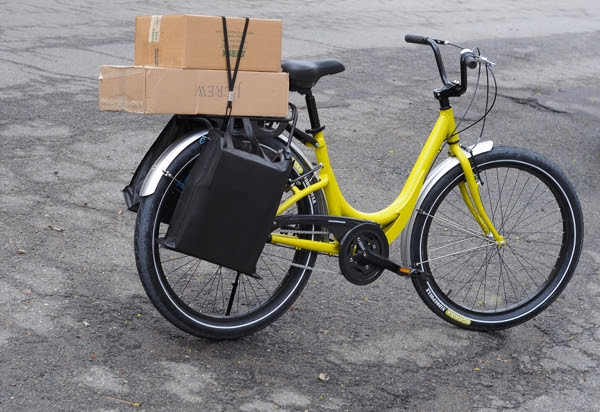 First, allow me to acknowledge that my so-called "cargo" pales in comparison to the likes of what some greater, more adventurous cyclists carry on their bikes every day without batting an eye. But I am neurotic and risk-averse, and I never really have all that much to carry. So for me, this was a great feat worthy of glee and merriment. To give you a sense of scale, the larger box with the J. Crew insignia (I re-use old boxes for shipping) originally contained a long winter overcoat and is almost twice the length of the rack supporting it. The box on top of it is shorter, but taller. And each of the bags on the sides contain two heavy, medium-sized boxes. 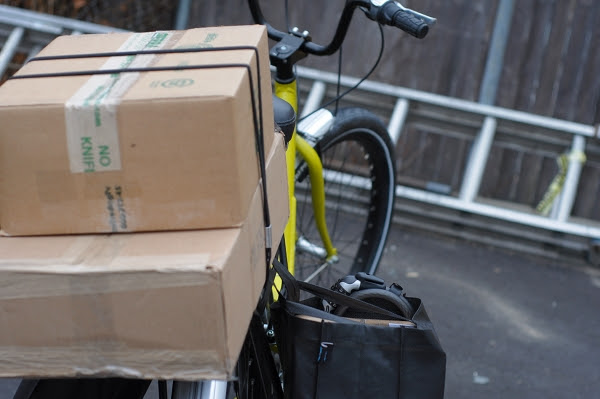 The trip was necessitated by my needing to mail a number of large packages simultaneously, which has not happened in a while. If confronted with this situation 5 months ago, I would have simply waited until the Co-Habitant was available and we would drive it all to the post office on a Saturday morning in the car. But now we no longer have a car (at least for the time being - it's not permanent, really!), so I could either make multiple trips to the post office or try to fit it all on my bike at the same time. The latter turned out to be surprisingly - almost disappointingly - easy. Within minutes of deciding to try it, the packages were secured to the sturdy backside of the Urbana bike. 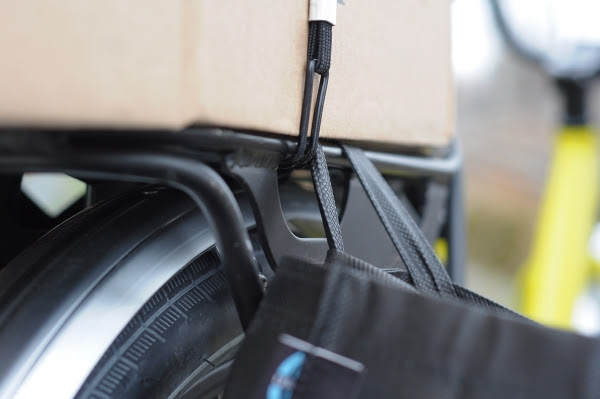 I wasn't sure whether my bungee cord would fit around both boxes, and whether it would be sufficient to keep the boxes sturdy. To my delight, it was a "yes" on both accounts. I secured the two bags on the sides using the rack's hook system (see here and here), which was convenient in that I did not need to use dedicated panniers or ropes. The whole set-up literally took 5 minutes, and then I was off: first gingerly, then at a moderate pace. The postoffice is fairly close to my house, so I cannot boast a grueling ride over hills or along dangerous highways. But for what it's worth, it was raining, and the roads in my neightbourhood are riddled with potholes the size of ditches. 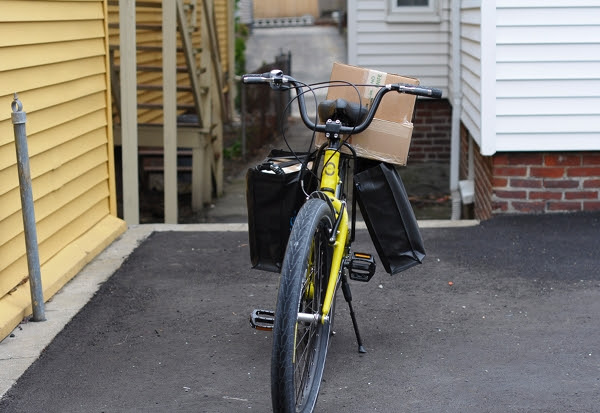 The ride was an uneventful success. Still, I cannot say that I enjoyed cycling with six boxes attached to my bike. I was conscious of them the entire time, and kept worrying that something might fall off - not only getting damaged in the process, but also causing me to panic and do something unwise in the midst of traffic. So... while I can do it if necessary, I am just not one to derive pleasure from loading my bike up with a stack of boxes secured to the rear rack with bungee cords.

On the other hand, I do like the independence such hauling capacity offers, as well as the smooth handling of this particular bike despite the load. Richard Masoner of cyclelicio.us sent me a link to this picture of himself riding an Urbana with an enormous plastic tub bolted to the rear rack, in which he carried 80lb worth of camping gear. Okay, I like it. If this bike were mine, I can see turning it into a dedicated "cargo chariot," with a colour-matched tub permanently attached to the rack. Postoffice run? Toss the packages in the tub. Need to buy furniture or building supplies? Tub! This could seriously eliminate our need for using a car for local errands, without the need for an unwieldy longtail or Bakfiets. 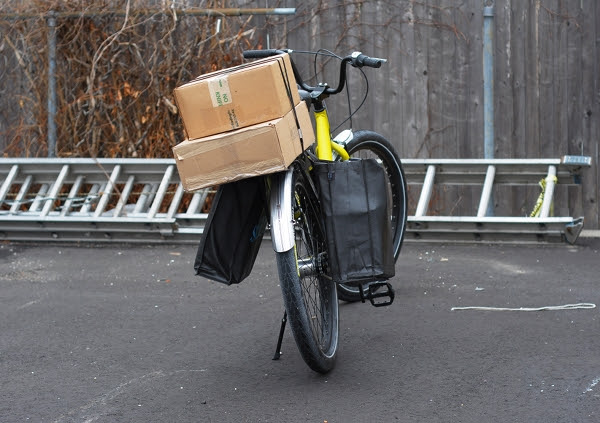 The Co-Habitant cautions against the giant tub idea, pointing out that carrying a heavy load that high is bound to create handling problems. But I wonder whether that applies to all bikes, or whether the Urbana's design accommodates it - after all, the rack is rated for 150lb, and they do not specify that it needs to be carried as low as possible...

So, how about this question: Assuming that (1) one does not plan to transport children, and (2) the rear rack is rated for the weight, what, if anything, is wrong with attaching a Bakfiets-sized container to the rear rack of a hardy transport bike and turning it into a "cargo chariot"? I am not talking milk crate, but a truly enormous tub, as shown here. It seems to me that such a system could really work for a person who cannot deal with (or afford) a longtail or full-on cargobike. It could work for me, for sure.
Labels: bicycle reviews racks urban cycling Urbana