Panniers on Bikes with Short Chainstays 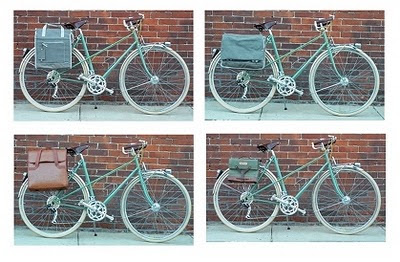 Since receiving the woven pine Fastrider pannier last summer, I have been using it as my main transportation bag. On the up side, it is enormous, waterproof, classic looking, easy to attach and detach, and secure. On the downside, it was designed for appropriately enormous Dutch bikes with long chainstays, and not for bicycles with road geometry. The pannier looks like it's ready to swallow the mixte whole, and ideally I would like something smaller. But for a bicycle with short chainstays finding the right pannier can be tricky.

Now, my Royal H. mixte was not designed as a transportation bicycle. It was designed for light touring (not too much luggage), and it was designed to be ridden upright in hilly areas. The chainstays are 430mm, which is somewhere in between classic road and classic touring geometry and appropriate for what this bike was meant for. So in theory, all is as it should be. However, in practice I've been riding it for transportation more than I had anticipated - just because it's such a fun bike, and the dynamo lighting is so excellent.

If it were just the aesthetics alone, I'd keep using the Fastrider pannier on this bicycle and not bother looking for alternatives. I actually don't think it's that bad, though my helpful readers have suggested that it looks meh-ish on the mixte. But the real problem is that I do get borderline heel-strike with this set-up. Not enough for it to be dangerous, but once in a while my heel and the bag will not so much make contact as sense each other's presence. If the bag were just a tad further back or smaller, I'd feel more comfortable.

With this in mind, I ordered two panniers from the D'Azur line by Basil, in hopes that one of them would fit and I'd return the other. The Basil shopper pannier (above) is nearly 2" narrower than the Fastrider equivalent, which in theory should have been more than enough to eliminate any hint of heel strike. Unfortunately, the opposite was the case. Because of how the Basil attachment hooks are positioned, this bag actually sits further forward and lower than the Fastrider - resulting in an unridable degree of heel strike. If you scroll up and down between this and the previous picture, you can see how much closer the Basil bag is to the pedal, despite its slightly smaller size.

The messenger pannier did not work either. This bag is the same width as my Fastrider, but considerably shorter, so I was hoping it would sit higher up and my heel would not reach it. But again, the placement of the attachment hooks positioned it quite a bit lower than the Fastrider, as well as further forward, making the heel strike worse rather than better. And so, I will be returning both of the Basil panniers. They are well made and attractive, but I need a pannier small enough to work on this bike+rack combination. And I mention the rack, because I could solve this problem by replacing the existing VO Constructeur rack with a super long rack that would allow me to push the panniers further back... but I don't want to. I like how compact, light and elegant this bicycle is with the current rack, and after all it was not intended for commuting. There has to be a nice pannier out there somewhere that will fit a bike with 430mm chainstays and a constructeur rack, and I am determined to find it.

Well, technically I did find it: The OYB Swiss Army pannier is a perfect fit for the constructeur rack, and it goes nowhere near my heels when I pedal. Alas, it is about 1/2" too narrow to fit my laptop. I've tried stretching it, but it's just not sufficient, so I use it as a camera bag. I also tried (and returned) the Linus single Office pannier. While it did fit my laptop, the attachment system was difficult to use and did not feel secure: leather straps with snap closures.

It seems that the trick to designing panniers for bicycles with short chainstays, is to make the pannier vertical rather than horizontal, to mount the hooks lower on the bag (so that the bag itself will sit higher), and to keep the size as small as possible. But while some touring panniers are designed in this manner, I have not been able to find a suitable one for commuting - by which I mean a single pannier that attaches and detaches easily via strong and secure hooks, is large enough to fit a laptop, and looks classic, ideally made of canvas or leather in a grayish/greenish/brownish colour scheme. If you are an artisan who would like to give this a go, get in touch! And if you commute on a bicycle with short chainstays, what is your pannier solution?
Labels: bags Constance mixte Royal H