The 'Backlash': Why Are We Surprised? 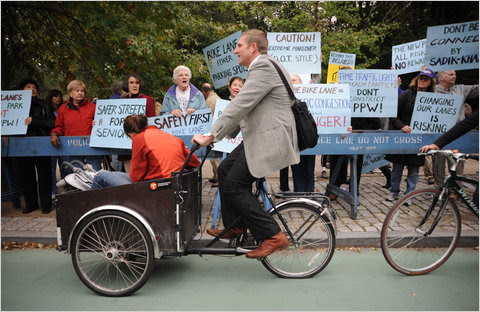 [image via nytimes]
For the past couple of weeks, cycling blogs have been abuzz with news of a backlash in New York City against bicyclists and bicycle infrastructure. Police are overzealously handing out traffic tickets to cyclists. Members of the community are demanding the removal of bike lanes. Protests are underway. Anti-cycling op-ed pieces are appearing in respectable publications. Alarmed and disappointed, cyclists all over the country are wondering what the heck is going on.

But what I'm wondering is: Why are we surprised?

Think about it objectively. Since when has society embraced sudden change? Since when have the values of a minority been unquestioningly accepted by the majority? Since when have people welcomed ideas that they believe threaten their own lifestyles? Since never. That's not how things work. And cycling - a fringe activity that over the past couple of years has attempted to torpedo itself into the North American mainstream - is no exception. The "cycling culture" is not so special as to be immune to the laws of social psychology. Ingroup-outgroup bias, prejudice, stereotyping, and all that good stuff, apply to the interactions between non-cyclists and cyclists just as they do to interactions between other social groups with conflicting goals and value systems. It was naive on our part to believe that sweeping changes could be imposed on our neighbourhoods - both in the form of bicycle infrastructure and even just in the form of increasing numbers of cyclists on the roads - without non-cyclists feeling threatened.

The incident that took place in Boston several months back illustrated this point perfectly. Just weeks after bicycle lanes were installed in Charlestown, the local residents had a Council meeting, voted to have them removed, and swiftly did so. Many cyclists were outraged by the events, and in a way so was I - The waste of government funds this battle of wills involved was unacceptable. But the reaction of the Charlestown community in of itself was understandable to me. Adequate research was not done to determine whether neighbourhoods through which bike lanes were planned wanted them or not in order to gauge possible resistance or hostility. No effort was made to establish good will with the neighbourhoods, and so there was no good will. The community felt that something strange, foreign and dangerous was being shoved down its throat by the big city planners, and they wanted none of it.

I think that we, as cyclists, need to be aware (1) that we are in the minority, (2) that cycling is perceived as weird and dangerous by the majority, which means resistance to it will be high, and (3) that we live in a democratic society where we cannot impose our beliefs on others no matter how right we think we are. There needs to be sincere and open dialogue (as in two-way conversation) with the non-cycling community, free of smugness, slogans and arrogance. It is not productive to tell people that "Everyone can cycle," that "You too can live without a car if you tried," or even that "Cycling is good for you." Rather than encouraging, those messages are perceived as threatening, making people feel as if they are being told that their way of life is inferior and that some bizarre social engineering project is unfolding against their will. I don't think that most cycling activists even realise that, because those are the only types of messages I see when attempts are made to reach out to the public.

What I suggest instead is sending messages that don't just focus on ourselves and our point of view, but on the community at large - and especially on those who don't ride a bike and don't plan to. Why not spread information that bike lanes make neighbourhoods safer? That bike lanes help small businesses? That bike lanes help motorists? Imagine a public service announcement commercial that goes something like this:


A man gets out of his sedan in front of an office building. He looks at his watch, then faces the camera with a smile. "Finally got to work on time!" The camera pans out to show the road with freely moving car traffic, and a bike lane with lots of bikes. "With the new Main Street bike lane, more people are choosing to ride their bikes, leaving the roads clear for those who prefer driving. No more traffic jams, that's for sure." And a caption underneath reads "Traffic congestion in Neighbourhood A has decreased X% since bike lanes were installed."

Sure it's simplistic, but so was "Got milk." To avoid a backlash, we need to show that cycling is good for everyone.
Labels: social commentary