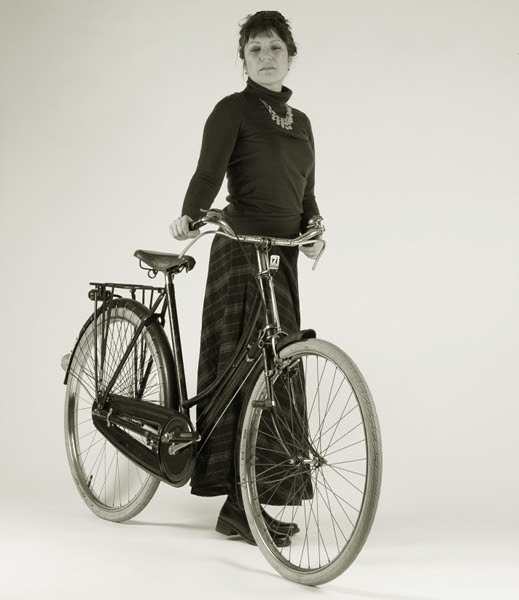 [an unsuccessful attempt at parody]
There has been some discussion lately about how appropriate it is to refer to diamond and step-through frame bicycles as men's and ladies' bikes. After all - gender roles are flexible these days, women are no longer expected to wear elaborate skirts, and a low standover height can be convenient for everyone. So why use gender specific terminology? Am I just intentionally being quaint?

Well, not exactly. You see, when a bicycle model exists in both diamond frame and step-through designs, the latter is usually not just about lowering the standover height. It is also about taking the female anatomy into account. For example, have a look at the pictures below and see whether you notice anything interesting.

[image via Gazelle USA]
These are the Oma and Opa versions of the current production Gazelle Toer Populair bicycles. If you look closely, you will notice that the Oma on the left has a considerably higher headtube than the Opa on the right. This is done in order to set the Oma's handlebars higher, so as to accommodate the typically shorter torsos and arms of female cyclists. The bikes are named "Grandma and Grandpa," because they are, in fact, gender-specific. The expanded headtube tactic is used by many manufacturers on their step-through models, while others use the alternative tactic of shortening the virtual top tube. Either way, more often than not the step-through version of a given bicycle model is designed for the female body. This is not to say that men cannot or should not ride step through frames, but only that step-through frames are typically optimised for female proportions.

Of course, one could ask: Why confound gender-based anatomical differences with preferences for standover height? After all, some women may prefer diamond frames, while some men may prefer step-throughs. That is where statistics and market research come in. Most manufacturers cannot afford to make two versions of diamond frames and two versions of step-through frames within the same model. And statistically, women are considerably more likely to wear skirts and are thus more likely to prefer a step-through transportation bike. Therefore, it makes more sense to optimise the step-through design for the female anatomy, while optimising the diamond frame design for the male anatomy. Naturally, there will be some females who prefer the diamond frame and some males who prefer the step-through. Furthermore, not every woman has a short torso and not every man has a long torso. But when it comes to manufacturing decisions, it's all about tendencies and probabilities - not about individuals.

And speaking of statistics, perhaps we could indulge in another poll (a weekly tradition?). No purpose for this other than my own curiosity, and possibly yours:


In my own vocabulary, I use terms like "lady's bike" or "woman's frame" when I am referring specifically to the bicycle's suitability for females - be it anatomically, or in terms of their ability to accommodate skirts. On the other hand, I use terms such as "step through," "loop frame," and "mixte," when I am describing frame geometry. And while some worry that referring to bicycles as "women's bikes" makes them seem inferior or less valuable, I am not on board with that line of thinking. After all, what is considered "standard" frame geometry in the industry, is in fact optimised for the male anatomy. We are female, we are wonderful, and we need bicycles designed for us. To me, that is neither offensive nor obsolete - it's just common sense.
Labels: Gazelle gender loop frame poll Raleigh social commentary vintage