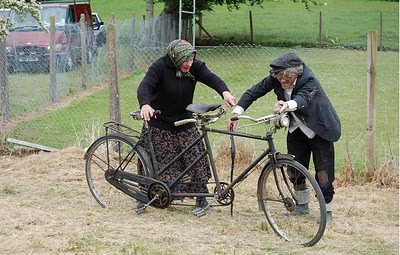 [image via Chris 531]
Over the past couple of weeks, I've spent considerably more time moderaring comments than usual. For the most part, it's been a handful of readers getting overzealous in their debates with one another. But when hostility enters a discussion, others get sucked into it as well. All I know is: I don't want to be the Jerry Springer of bicycle blogs. I would rather have fewer comments, but retain the atmosphere of comradery that has been characteristic here thus far.

I have wondered whether discussions about bicycles are somehow more prone to conflict than other topics. Readers often tell me that they are uncomfortable commenting on various online bicycle forums and blogs, because they find the atmosphere hostile. And I understand that: I myself have a difficult time communicating on bikeforums, despite it being such a valuable resource for technical information. I also can no longer read the comments on Yehuda Moon, because of all the bickering between readers there. It is well documented that there exist genuine differences between what kind of interactions people find enjoyable: Some prefer for everything to be in the style of a debate, with technical inaccuracies in the wording of others victoriously exposed. Others favour a more nurturing, open form of communication. My own preference is somewhere in between: I like a good debate and I am fine with being challenged, as long as the underlying mood feels friendly. 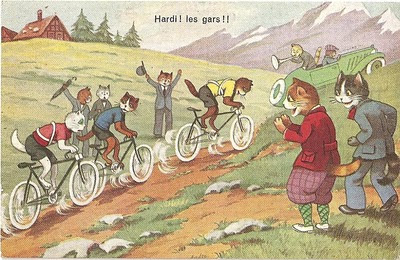 [images via Schwar]
Sometimes I think that we'd all be nicer over the internet, if we just imagined all the unknown others out there as kittens. Kittens, who love bicycles - at times feisty, but ultimately sweet and fluffy, pedaling happily through the fragrant meadows. Do you really want to hurt their feelings?

But for those who can't deal with the kitten metaphor and prefer specifics, I will be more direct: I think that it is a matter of common sense to refrain from mocking or deriding others' points of view in the comments. It's not that everyone has to agree, but sometimes there are nicer ways to disagree. In the same vein, consider refraining from statements that, while technically speaking may be phrased politely, you know in your heart of hearts are inflammatory (for example: "No offense meant, but riding a blue bicycle lowers your IQ and transmits STDs"). Finally, allow me to suggest that it is best to avoid making speculative, or misleading statements about individuals or entities that can be considered slanderous (for example: "I heard that Lovely Bicycle is written in the Far East, using child labor and toxic inks"). I trust that most people understand the difference between comments that are "in good faith" and "not in good faith."

Meaningful reader feedback has been a defining element of "Lovely Bicycle" from the start, and it makes me happy to be the hostess of such thoughtful, interesting discussions. As one reader recently suggested, my posts are collaborative: I offer my views, and others offer their views in return. It's a constructive exchange, which I think works nicely. Please help me keep it that way. And think of the cycling kittens.
Labels: blog development social commentary