Who's Afraid of Toe Overlap? 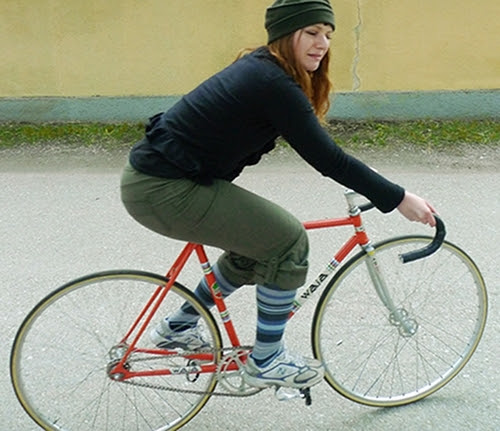 The idea of "toe overlap" or "toe clip overlap" (TCO) is one of those hot button topics that can cause metaphorical bloodshed in online discussions among bicycle enthusiasts. Still, I would like to have a go at it, as I think my perspective reflects the type of cyclist who does not typically take part in these debates. I would also like to discuss the topic from both sides of the argument, encouraging readers to form their own opinions. In short, here are my 2 cents:

What is toe overlap?
On some bicycles, it is possible to hit the front wheel with your toe when turning at slow speeds. This interference (or overlap) between your toe and the wheel can make you fall. Toe overlap is especially common on bicycles with small frame sizes and large wheels. If you picture what happens to the wheels of a bike as the frame gets smaller (as the top tube gets shorter, the wheels move closer together), it makes sense why that is so.

Is toe overlap a problem?
I don't think there is an answer to this question that rings true for everyone, but I will try to cover multiple sides of the argument.

An argument for "no": Chances are that you already have a bike with toe overlap and simply haven't noticed. Try it: make a slow, sharp U-turn on a quiet street or in a parking lot, and pay attention to whether your toe can potentially hit the wheel as you are making the turn. The overlap is more drastic on some bikes than on others, but most smaller-frame production bicycles have it to some degree. The reason many cyclists remain blissfully unaware of it, is that we rarely cycle at speeds slow enough for the wheel to turn so sharply as to cause the overlap. So while the overlap is a theoretical possibility, it is not usually a threat.

An argument for "yes": Cyclists do occasionally make turns slow enough to cause toe overlap. Instances when that might happen include the aforementioned U-turns, as well as slow turns in urban traffic. In addition, beginner cyclists tend to go slower than experienced cyclists - making them more vulnerable to toe overlap.

An argument for "no": Some in the bicycle industry will argue that toe overlap is not so much a "problem" as a reality, and it is the cyclist's responsibility to learn to deal with it. Even on bikes with dramatic toe overlap, and even when those bikes are fixed gear (i.e. coasting through a turn is not an option), there is a way to time your pedal strokes so that your toe does not hit the turned wheel. There are formulas and instructions for this. Over time, it becomes "second nature."

An argument for "yes": What is "second nature" to some, may not be to others, even over time. There are some experienced cyclists who've had bad falls as a result of toe overlap. The bottom line is, that if your bike has toe overlap, and if you actually manage to hit the front wheel with your toe as a result (or get your toe jammed in there, which also happens), you could have a bad fall while trying to execute a turn. Therefore, at least in theory, a bike with toe overlap is more accident prone, than a bike without. Some would argue that this in itself makes it a "problem" and not just a "feature" of the bike.

What can be done to avoid toe overlap on small size bikes?
In theory, a few things can be done by the framebuilder or manufacturer to create small size frames without toe overlap. The problem is, that all of these changes have consequences that can be perceived as drawbacks. For example:

Smaller wheel size: Toe overlap can usually be eliminated on a small frame by fitting the bike with proportionally smaller wheels. For instance: 650B instead of the typical 700C on a roadbike, or 26" instead of the typical 28" on a roadster-type bicycle. The reason this is seldom done on production bikes, is that it is more costly for a manufacturer to design different sized frames around different wheels. Additionally, cyclists themselves tend to have an aversion to smaller wheels, due to a commonly held belief that larger wheels are faster. This makes smaller wheeled bikes less popular, despite their no-TCO advantage.

Changes in frame geometry: Toe overlap can also be eliminated by a number of changes to frame geometry. The simplest method is to make the the top tube a bit longer and the seat tube a bit steeper, which will create more space between the front wheel and the crankset without changing the way a bicycle handles too much. However, a longer top tube means that you will either be too stretched out on the bike, or will need a super-short stem. And a steep seat tube means that you may either be uncomfortable with the aggressive angle, or will need to find a seat post with considerable set-back. If you prefer a relaxed seat tube angle and a reasonable top tube length, then the other options are more complicated, as they involve messing with the bicycle's handling: Making the head tube slacker and increasing the fork rake will reduce toe overlap as well, but it could make the bicycle less responsive, which many cyclists would find undesirable. I don't want to turn this into a lesson in frame geometry, but suffice to say that some would prefer to deal with the toe overlap, rather than make either of these changes to their bike.

Conclusions?
It is hard to find a definitive answer to the questions of whether toe overlap is a problem, and of how to eliminate it. Different frame builders, bicycle fitters, and other industry spokespersons will tell you different things, and they may all sound perfectly convincing and reasonable while you are listening to them... until you hear the other guy's argument for the opposite, and it will sound equally convincing and reasonable.

My personal view is that toe overlap is a problem if you consider it a problem. And if you do, then I don't think it's right for anybody in the bicycle industry to try and persuade you otherwise in order to sell you a bike. Ultimately, it should be up to the cyclist to decide and for the framebuilder, or salesperson, to accommodate.
Labels: comfort framebuilding