All the walking I've been doing lately on account of the weather has made me pay even closer attention to my surroundings than I do while cycling. Everything looks different in the snow - elegant and magical. The thin patch of woods near my house has turned into a majestic white forest worthy of a 19th century Scandinavian painting. It's as if the sky was squeezed straight out of a tube of cerulean blue and the austere vertical strokes of the trees were applied with a pallet knife. It's not my style, but I am certain this scene has been painted many times. It's archetypal. 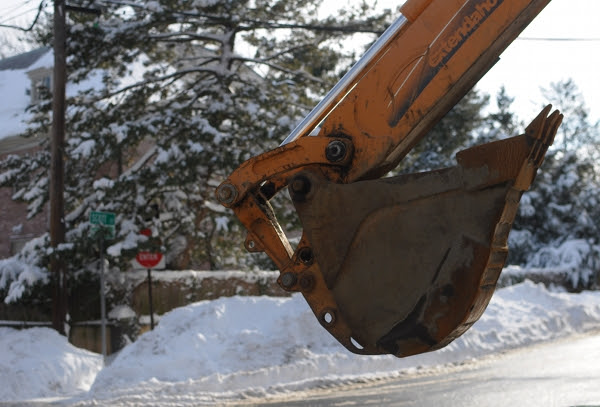 Upon emerging from the pristine wonderland, I came face to face with this. Literally: It was located at face level, and in my willingness to submerge myself so fully in my daydream, I nearly walked into it. 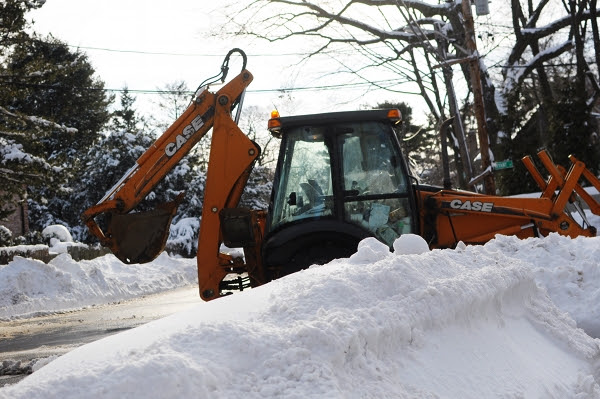 The city is using excavators to facilitate snow removal, as the plows alone are not enough. The effect is interesting, making the neighbourhood look like an igloo construction zone. In order to clear the center of the roads, the excavator dumps more and more snow to the sides - creating monstrous, densely packed snowbanks that line the streets like the walls of some arctic city-state. 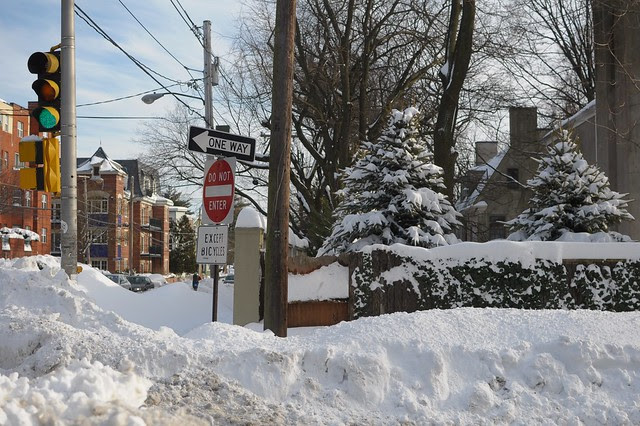 Walking on the sidewalk is a surreal experience. You are essentially in a tunnel - with buildings on one side, igloo wall on the other. Along some stretches, the snowbanks are taller than the average human height, so as a pedestrian I can only see the sidewalk in front of me and not the road to the side of me.

Those "Do Not Enter" and "Except Bicycles" signs are for a one-way side street that has a bike lane going in the direction against traffic. For most of last winter the lane looked like this. How cute that I complained about it then: This year it's been swallowed up by the snow banks entirely. 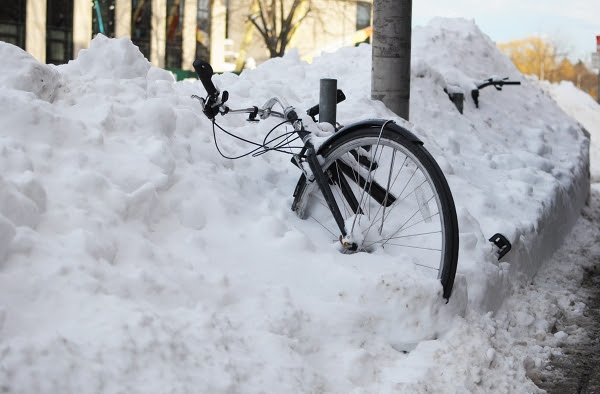 It is not uncommon to encounter bicycles "buried alive." There were actually three separate bicycles inside this snowbank. 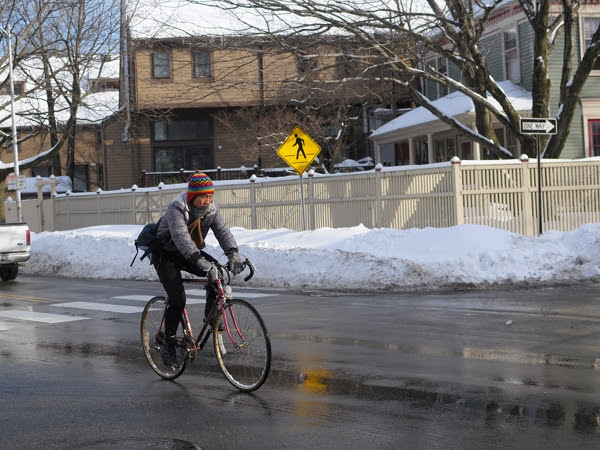 Less common is the sight of a bicycle being ridden - but it happens, especially on the heavily salted main roads. Note how the yellow crosswalk sign, its reflection in the puddle, and the golden light of the setting sun play off the colours in the cyclist's knitted hat - all of it especially noticeable against the white, snowy backdrop. Somehow, everything seems to be reminding me of a painting these days. Certainly this person and his hat deserve to be painted. 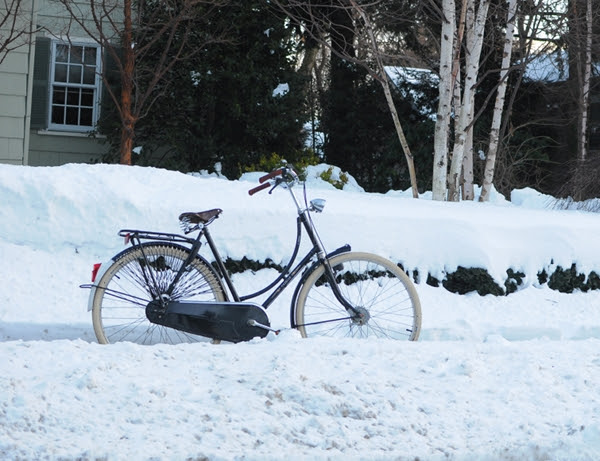 It's been over a month and a half now without the car. We signed up for zipcar through the Co-Habitant's work, but have not used it yet. And ironically, the blizzards are making it easier to do without: With the roads as bad as they are, we wouldn't have been traveling to any photoshoots up North anyway, and so we don't feel as if not having our car is keeping us from accomplishing anything. We'll get the car fixed as it gets closer to Spring. But for now, it's been remarkably easy to just forget about that thing and for us both to get around entirely on foot and bike. And with so many snow days, I am rediscovering walking - which I appreciate for making me stop, look around, and see my neighborhood in a new light.
Labels: cars Gazelle winter cycling