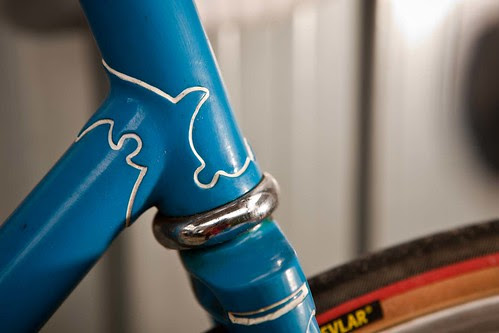 [image via hbuckles]
While I've come to appreciate some non-luggged methods of frame construction and have even discovered a bike that I truly think looks better without lugs (the truss frame), overall my infatuation with lugwork shows no signs of subsiding. I can go into a meditative trance whilst following the seemingly chaotic yet magically harmonious outlines of a Nervex lug (above) and I can experience a dizzying sense of exhilaration at the sight of a particularly intriguing seat cluster (below). 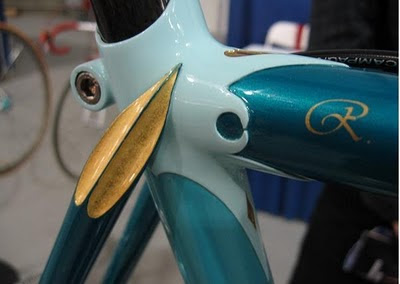 [image via Ciclo Di Cuoio]
Granted, it's kind of insane to feel so strongly about lugwork - but also perfectly normal for someone involved in art and design. After all, if designers and artists did not feel an obsessive emotional attachment to forms, colours and textures, what would motivate them to create new work? I don't see myself as a hands-on framebuilder, but I think that my dream "bike job" would be to work with a framebuilder as a designer - not only of overall frame specs, but of the lugwork itself. Some framebuilders make proprietary lugs from scratch, while others take pre-fab lugs and alter them beyond recognition - so it's possible to find someone to work with in that context. Some day. 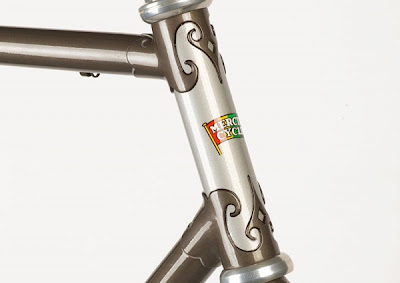 [image via Mercian Cycles]
But back to lugs... As with everything, those who are into lugwork tend to have their preferences. For instance, for some it's "the fancier, the better," and their "holy grail" is the type of truly elaborate lugwork you might see on Hetchins frames. Some like their lugs chromed, or painted a contrasting colour to the frame.  Some prefer "pointy" lugs, while others prefer "rounded" ones. Many customers ordering custom frames ask for something personal or symbolic to be carved into at least some of the lugs, like a shamrock or a star of David. And others still might favour a particular manufacturer, preferring the distinct looks of Nervex lugs, Capella lugs, or Mercian's Vincitore lugs (above). 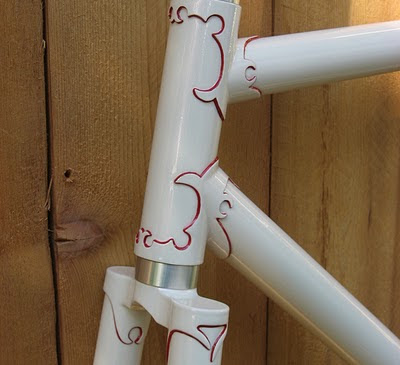 [image via Joel Greenblatt]
To my eye, lugwork looks best when it complements - but does not overwhelm - the overall form and "personality" of the bicycle frame. For that reason, I am actually not a fan of some of the fancier lugwork out there - to the extent that if someone were to give me a Hetchins with one of the elaborate lug patterns, I would sell it; it really does nothing for me aesthetically. To me, a bicycle frame is ultimately about the form of the frame itself, and I think that overly ornate lugwork competes with that. If the eye is continuously drawn to the joints of the tubes, that interferes with being able to take in the overall aesthetic - which is not something I'd want to happen if I were designing a bicycle. For the same reason, it does not appeal to me when lugwork contrasts dramatically with the main frame colour: For instance, chromed or white lugs on a black or a deep red frame. Close up, the effect is beautiful, but it just does not work for me as an overall design when looking at the complete bike as a whole. 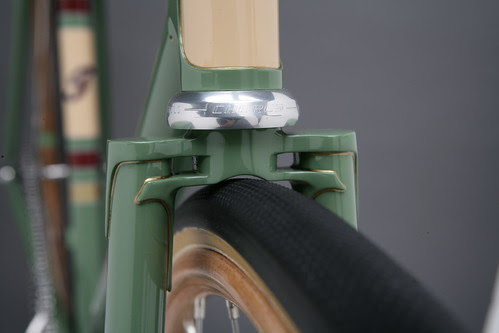 [image via Gregory Townsend]
I do have my favourite design elements, such as double-plate fork crowns (above), elegant seat clusters, and main lugs with a filigreed look to them. But inasmuch as possible, I prefer for these elements to be noticeable only upon close inspection, so that when looking at the bicycle as a whole, the overall form is what dominates. Oh, and when it comes to utilitarian transportation bikes? The "jagged broken pipe" look of the old Raleigh Sports lugwork is just fine with me - the simpler the better.

What are your preferences? - if you like lugs at all, that is! Do you have a "dream lugwork" in mind if you had the choice, or would you leave it up to the framebuilder?
Labels: framebuilding lugs