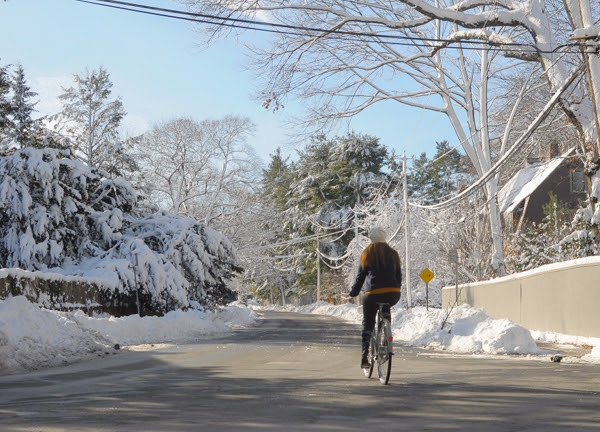 Well, it seems that we've been having one of two weather conditions in Boston lately: (a) blizzard, or (b) in between blizzards. When it's the latter, I have been riding my bike - sort of. To be honest, I would not be doing it if I didn't have to, because the road conditions are pretty bad. But the bus makes me motion sick, the nearest subway stop is a 15 minute walk from our house (longer in the snow), and the sidewalks are slippery. So except on days when the roads are completely impassable, cycling seems to be the least daunting option. Still, "least daunting" doesn't mean "easy," and I've had to make a number of adjustments to the way I ride a bike, in order to be able to do it at all. 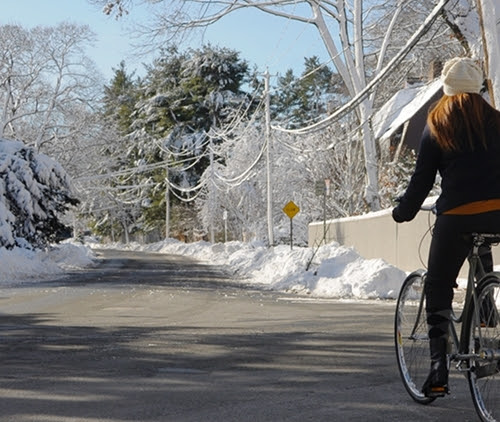 For one thing, I cycle much slower than usual, because I am scared of hitting not only ice patches, but those mini-mountains of hard snow that seem to pop up when I least expect them, like some treacherous obstacle course. Cycling slowly allows me to see them in time to either brake, or figure out how to go around them safely (I am a slow thinker when it comes to spacial rotation tasks). Happily, there are almost no other cyclists on the roads, so there is no one to get annoyed at my crawling speed - I've found that I can go as slow as I like, and no one seems bothered. I guess to cars, it's pretty much the same whether I am cycling at 7mph or 20mph: Either way, they are faster than me and will have to pass me eventually. 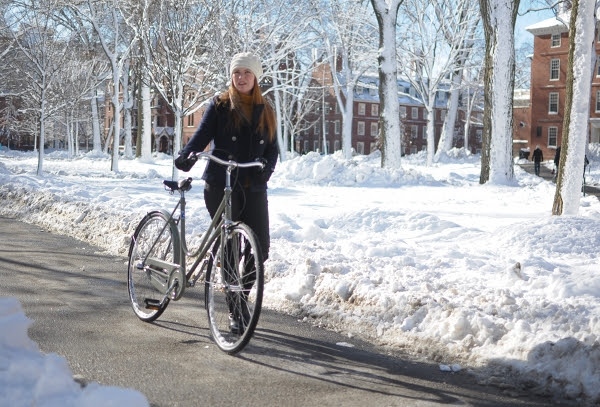 I also simply accept that I will have to get off my bike and walk a lot - across impassable stretches of slush and even over snowbanks. Sometimes I'll walk for a quarter of a block, then get back on the bike and ride for a couple of blocks, then get off again, and so on. It's annoying, but still better than walking the entire way - at least to me. Warmer and faster. 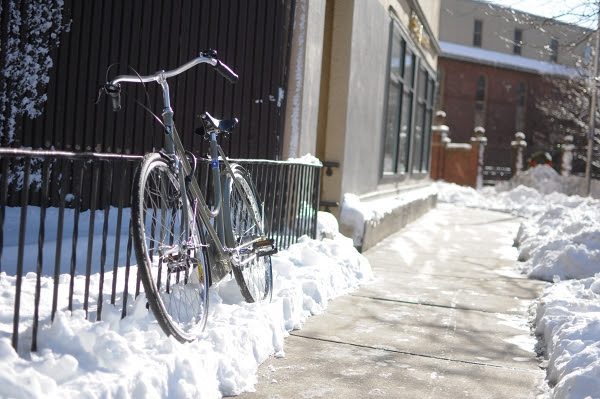 Finally, I've been having to get really creative about locking up my bike. Most bike racks have been made inaccessible by the surrounding knee-deep snow. So I will usually chain my bike to a fence, or whatever is handy - often having to rest it on top of a snowbank.

While all this is kind of miserable, I also find it pretty funny. I am not a "hard core" cyclist by any means and I am extremely risk averse. "Wimp" would probably be the appropriate word. And yet I am one of the few people out there on a bike, which does make me question my sanity. But I guess there is no better motivator than having no other choice - or at least no alternative options that are less daunting. Cycling in slow motion through a winter wonderland is not so bad, after all, when I compare it to feeling nauseous inside of a stuffy bus, or slip-sliding along icy sidewalks.
Labels: Bella Ciao transport transportation options winter cycling