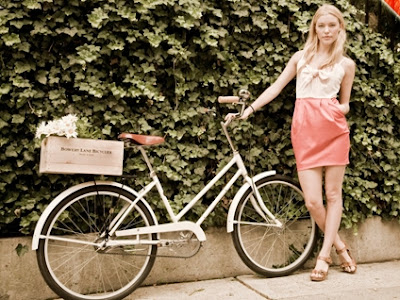 [Bowery Lane bicycle, made in Brooklyn; image via bowerylanebicycles]
When a skirt-wearing woman is photographed astride a step-through bicycle, she is inevitably described as riding a "European bike." Transportation bicycles in North America are to a large extent synonymous with European bicycles, and the cause is understandable: Most classic bikes currently on the market are indeed imported from the EU. But ultimately, how good is this association for the fate of transportation cycling in North America? Tom Bowden taps into this idea in How to Talk About Cycling to a Conservative, where he suggests to "refrain from gushing praise of European cycling culture, e.g. the Dutch, the Danes, or whoever. Conservatives are not inclined to emulate pre-colonial imperialist has-beens - at least not consciously." Funny, but true. And in my view not limited to conservatives. The US "as a whole" (inasmuch as there can be such a thing) prefers to be a cultural trendsetter, not a follower. Is it realistic to believe that bicycles are immune to that?

[vintage Schwinn, made in Chicago; image via eva.lu]
A separate issue is that of cultural affiliation. Does a European bicycle really mean anything to the majority of the North American population? Are images of Amsterdam, romantic as they may be, really of personal significance? I don't see how they could be. Images of a glowing midwestern girl riding a '50s Schwinn through the noisy streets of Chicago, or a carefree Californian on a beach cruiser, are likely to be more relatable. And that brings me to yet another point: the US has its own upright bicycle manufacturing tradition. From Victor Bicycles and Iver Johnson in Boston, to Worksman Cycles in New York and the aforementioned Schwinn in Chicago, the history is there and the cultural associations are there. Can new American manufacturers emerge from these historical roots? 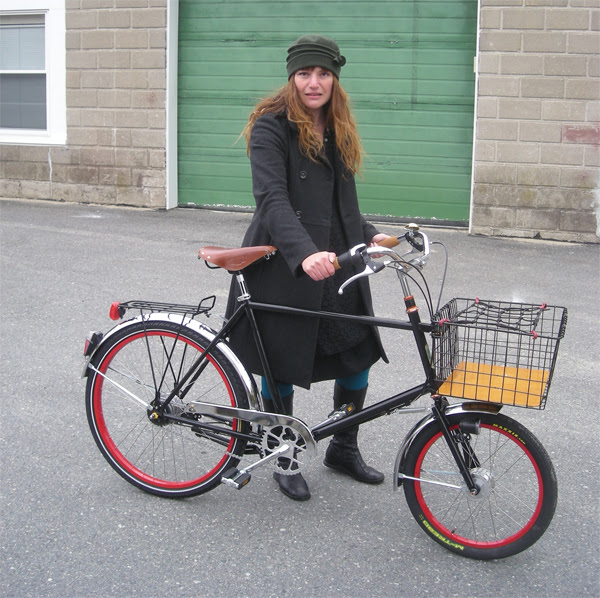 [ANT basket bike; made in Holliston, MA]
Please don't misunderstand: Obviously, I love European bicycles. English Roadsters, Dutch bikes, French mixtes, Italian city bikes - I am crazy about them all. But in addition, it would be exciting to see the US revamp its own distinct cultural specimen. To some extent, Mike Flanigan of ANT does this nicely - but he is a custom framebuilder and not a manufacturer. Perhaps over time, someone will step up to the plate and we shall see the classic (lady's!) transportation bicycle domesticated.
Labels: bicycle industry framebuilding