Bicycle Portraits in Ambrotype and Tintype 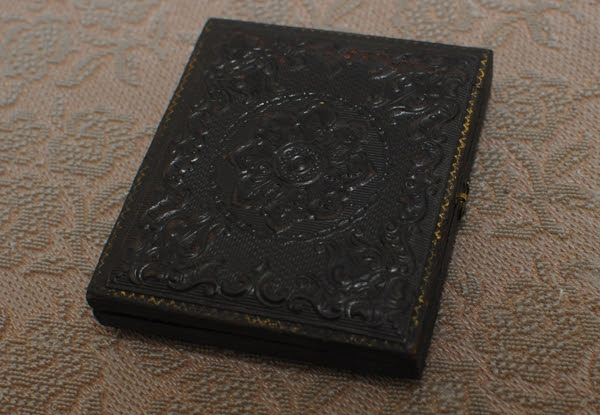 I've been helping a Lovely Bicycle reader with the process of ordering a custom bike, and he sent me something rather wonderful as a Thank You gift. 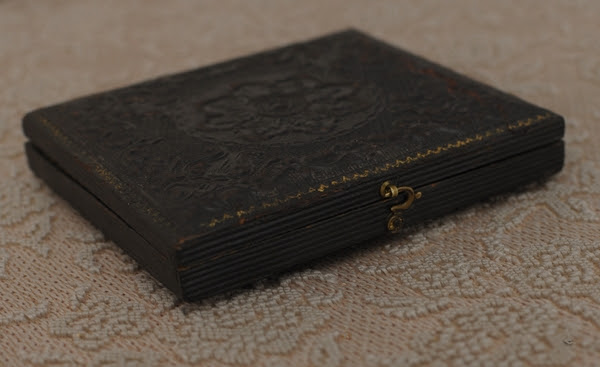 It's a beautiful little antique case, about 4x3", with the tiniest, delicate latch closure.  And inside of it, there is this: 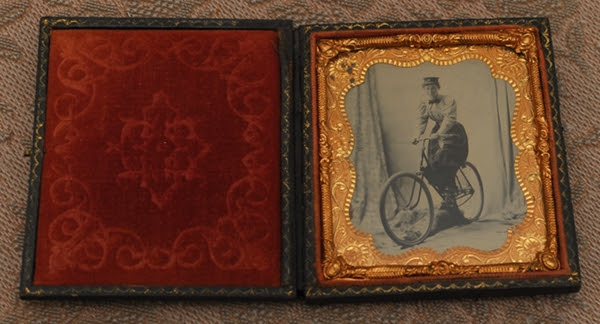 An ambrotype portrait of a young lady on her bicycle, c.1893-94. The ambrotype  is one of the oldest methods of photography, where the image is captured as a positive on glass using a wet plate process. Being on glass, ambrotypes are extremely fragile, which is why they were preserved in these enclosed, padded cases. And even with these careful storage methods, not many of them remain. This is a fine gift indeed, to say the least - especially for one obsessed with both bicycles and photographic processes. 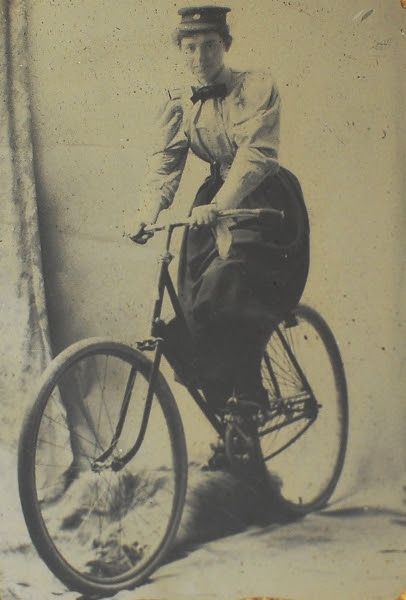 Here is a close-up of the image itself. I cannot remove it from its case, so excuse the murkiness. Notice that it is a mirror image - the drivetrain is on the wrong side. The first commercial freewheel was produced by Sachs in 1898, which means that this lady and others of her era were riding fixed gears. Also, notice the absence of fenders, but the presence of dress guards - at least her muddy skirt would not get stuck in the spokes? Otherwise, the bicycle is a fairly classic lady's Roadster (and apropos the earlier gender discussion - yes, these were made specifically for ladies). 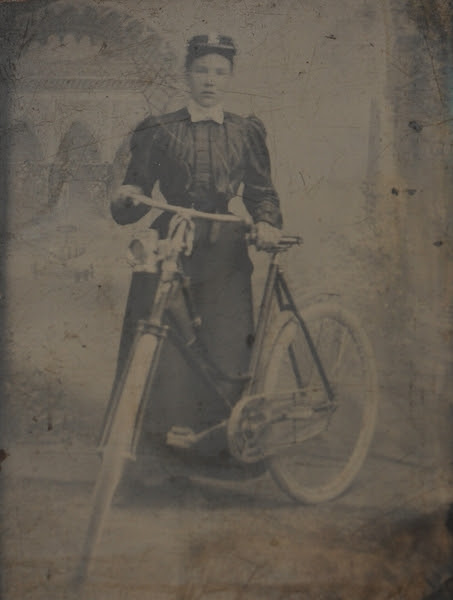 The encased ambrotype came in a set with a free-standing tintype - another positive photographic process, this one created on a sheet of blackened iron. Just amazing. Again, there is the mirror image effect. The bicycle here is similar, but with a fancier chaincase and with a headlamp. The person who sent me these pictures believes the women might be bicycle messengers, though it is also possible that the caps represent cycling clubs that were popular at the time. I must admit that I liked the image of them cycling on fixed gear loop frames through the city delivering letters.

With the rising popularity of flickr, many vintage bicycle photos have been getting scanned and placed on the web in the course of the past several years. And it always amazes me to see specifically the portraits of young ladies posing with their bicycles in a proud and stately manner. Getting one's photo taken was a special occasion in the 1890's, something that was only done once in a great while. And opting to pose with a bicycle in one of the few photos that would ever exist of you, seems telling of the relationship the person in the portrait had with their machine. The word ambrotype means "immortal impression" in Greek, and these ladies wanted to be together with their bicycle for eternity. Was it a status symbol, or an object of obsession? Probably both. And I wonder how the digital bike portraits of today will be interpreted 120 years from now - that is, if they remain at all.
Labels: art loop frame vintage