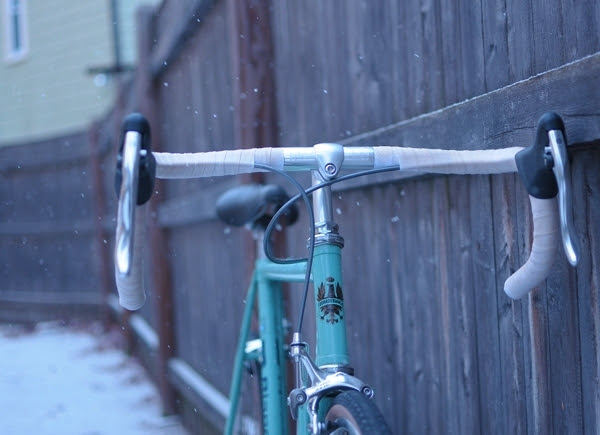 Having finally nursed my celestial beauty back to health, I was ready to take her on a proper test ride... And the snow decided to pick this day of all days to arrive? It felt like the final act of an Italian tragicomic operetta. But since the forecast did not predict snow until late morning, I set off early in hopes of beating the odds. After all the drama with this bicycle, I was not willing to forgo a test ride! 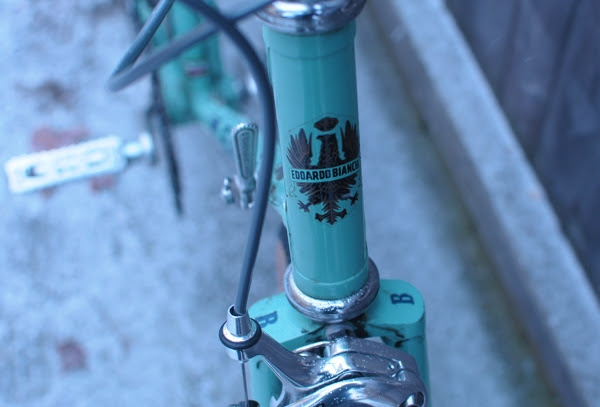 For the past few months I had been patiently hunting for one of these, but having no luck finding anything in my size and budget. Finally, an online bike-friend found something that seemed perfect and I pounced on it immediately. When the bicycle arrived, it initially seemed that my worst fears about sight-unseen deals were realised and the purchase was a disaster: Not only did every single component seem to require work, but the frame was a larger size than advertised - possibly too large for me. I considered just re-selling the bike as-is to save myself the heartbreak. But after much debate and some outside mechanical help, things began to look up and I decided to keep it. Once the wheels were in ridable condition and we put the tires on, the moment of truth came: I did clear the top-tube sufficiently, and so continuing the renovations was deemed worth the risk. 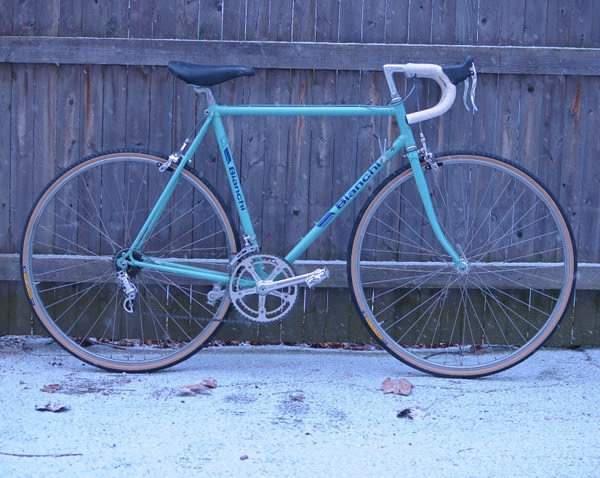 And now here she is: a 54cm Bianchi "Nuovo Racing", circa 1983. Made in Italy, Columbus tubing, some Campagnolo components. When I got the bicycle, everything was original - right down to the water bottle, which I promptly removed. 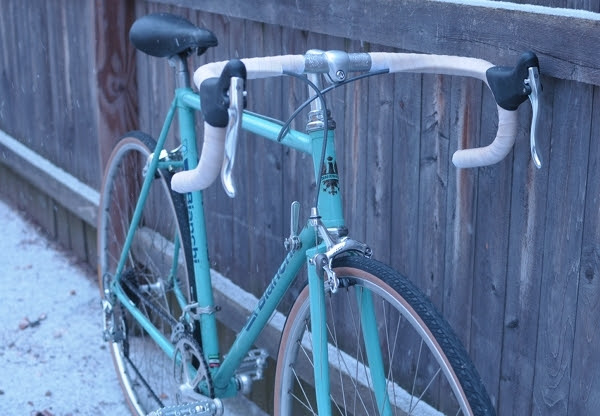 We replaced the handlebars and brake levers with modern Nitto Noodle bars and Tektro short reach levers. (The original bars and levers were damaged. But even if they hadn't been, I have trouble using vintage ones and am only really comfortable with the Noodle + Tektro combination.) 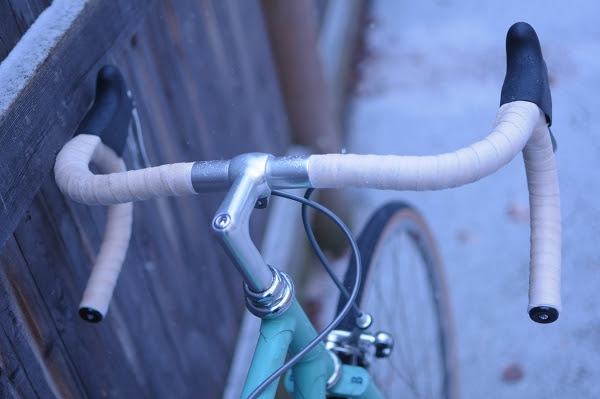 The original Ofmega stem was 11.5cm long - which felt scary, since the bicycle was already larger than what I was used to. We replaced it with a 7mm stem. 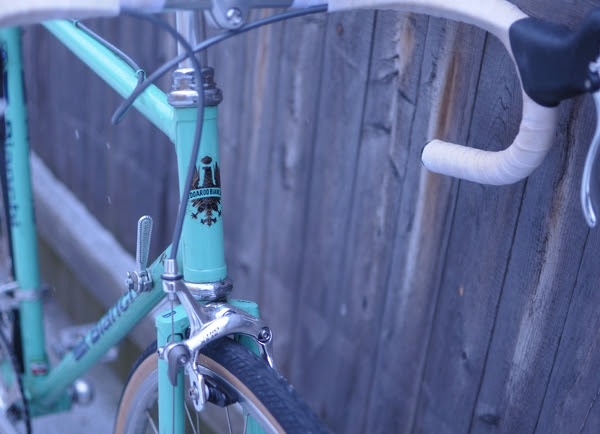 The original 23mm tires were torn to shreds and we replaced them with 28mm gumwall Panaracer Pasela Tourguards. I might eventually switch them with the cream tires on one of my other bikes, but maybe not. The original Modolo Flash brakes on the bike were damaged, and for now we've fitted it with a set of modern Tektro brakes - but they are not an ideal fit, and I am waiting to get a set of vintage Campagnolo brakes from a bike friend which I hope to replace the modern ones with. That should look much better, so I am hoping they work out. 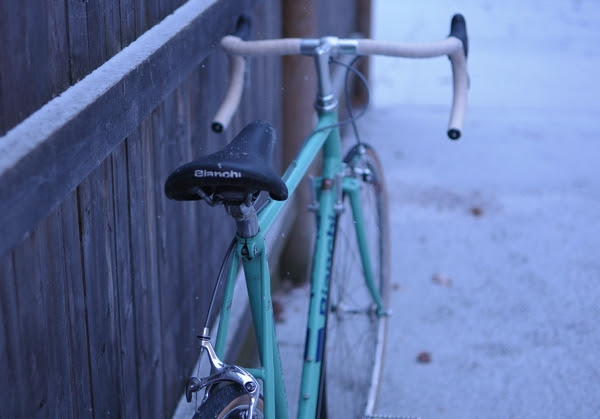 Otherwise, the bicycle is original, including - for now - the foam racing saddle, the shape of which feels surprisingly comfortable. The handlebars are wrapped with white cloth tape and covered in two layers of clear (not amber) shellac - which gives them a nice vintage-cream appearance. The end result is not "period-correct" by any means, but I don't think the modern parts look offensive either. It is subdued and evokes a sense of the early '80s, at least to me. 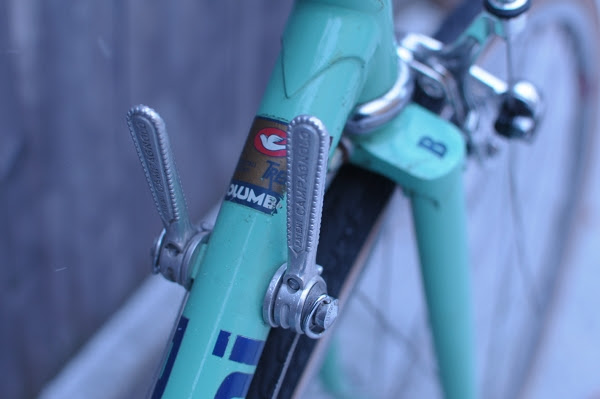 When you romanticise a particular bicycle and look forward to it too much, there is bound to be disappointment. For me, the disappointment was with the aesthetic aspects. I don't know what I was expecting, because I had poured over catalog pictures of this model before, so nothing should have been a surprise. But I guess, appearance-wise, the bike was more bland than I had anticipated. 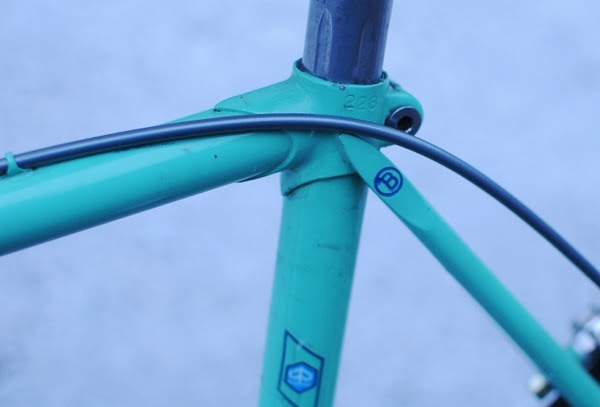 I think that I hoped to see "Italian flare", and there simply isn't any. It's a very ordinary-looking early 80s lugged bike, painted turquoise, with a bunch of blue Bianchi decals. Well, that's okay, I thought: Now I know that there is nothing magical about these bicycles. I will either enjoy riding it, or not; either way, it will be a learning experience. 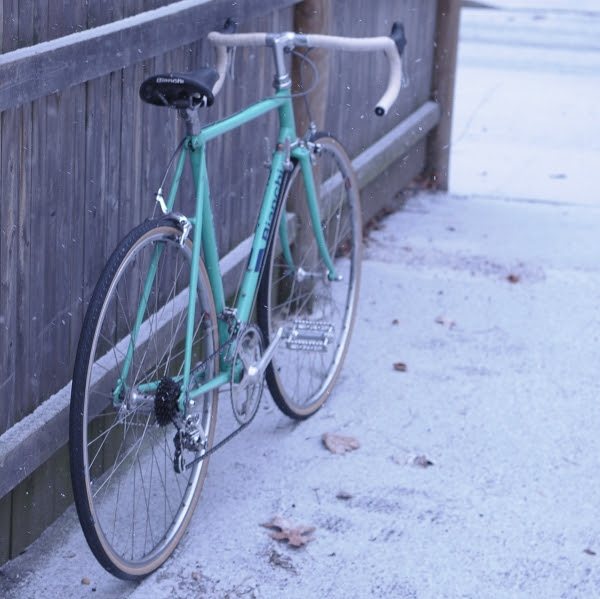 It was not until I rode the bicycle that I began to get attached to it. And make no mistake, get attached to it I did! - How could I have taken these snowy, romantic photos otherwise?  I first tried the bike a couple of days ago - with the long stem and faulty original brakes - for just long enough to determine that the stem was too long and the brakes were too faulty, but the ride quality was lovely. After having replaced the stem and brakes, I finally test rode the bicycle properly, just hours before the snow storm arrived. The Co-Habitant was worried about the bike's performance and about the weather, and so he extracted a promise from me to stay close to our neighborhood. And I did - riding for 45 minutes in loops until my hands went numb from the cold (winter glove recommendations for a road bike, please?) and the snowflakes started to fall. 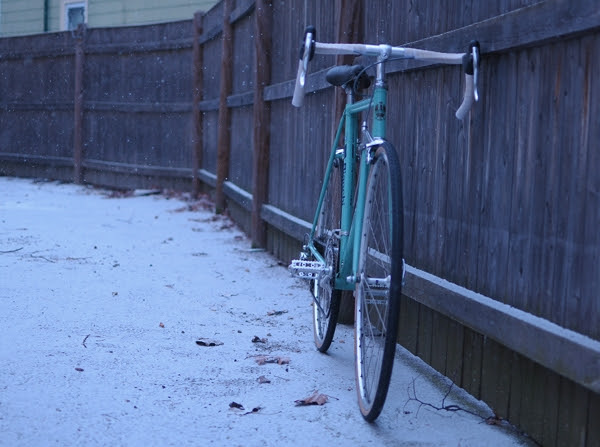 First impressions: The ride quality is nicer than I had expected. There was no harshness at all, and the bicycle was surprisingly stable at low speeds for a racing-style roadbike. The 54cm frame feels large, but I like it - I hope that I will be able to go back to 52cm bikes after this! The lean, even with the shorter stem, is more extreme than what I am used to. But I think I am okay with expanding my comfort zone in this respect. I was able to use the drops and the downtube shifters without feeling too unstable. And most importantly, this bicycle has the same "smooth and comfy" feel that I love so much about my Moser. 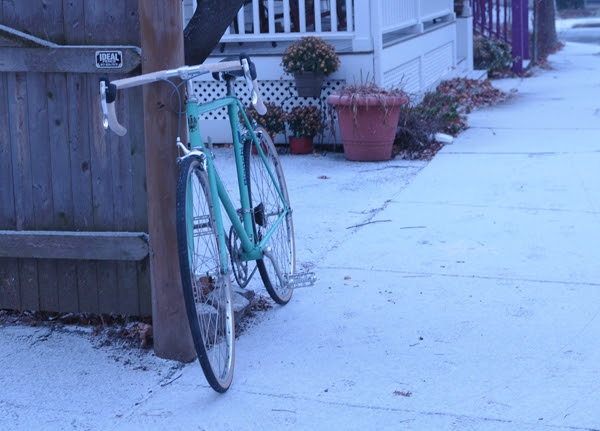 Because I have now shown a preference for several bicycles with Columbus tubing, while not being as crazy about my Reynolds 531 vintage Trek, it has been suggested that I might be a "Columbus person and not a Reynolds person". I don't know about that - or at least, I don't think that I have enough experience yet to determine such a thing. But I do know that I will be keeping this Bianchi and that I will be selling the Trek in the Spring. I won't make sweeping generalisations, such as that "I like Italian bikes" - but I do very much like the ride on the Bianchi, so far. And as beautiful as the snow is, I do hope it clears up and gives us a chance to ride together again this winter.
Labels: Italian bicycles roadcycling test rides winter cycling