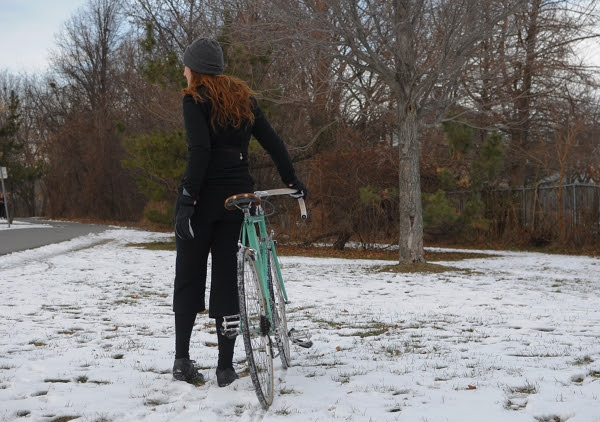 Rejoicing at the empty roads on Christmas Day, the Co-Habitant and I decided to give winter roadcycling a serious try. Once the snow arrives, I find riding a roadbike to be inherently more challenging than cycling for transportation, and have not succeeded in doing it until now. One major concern is the slippery road conditions. On an upright step-through bicycle, navigating winter roads is fairly easy: If there is slush or snow, my tires can usually take it and the bike is sturdy enough to remain upright even if the wheels start to slide. But on a roadbike, my weight is distributed differently and the handling is "twitchier" - making for a potentially hazardous situation under the same conditions. When cycling for sport, I am also going quite a bit faster - giving me less time to react to slippery patches ahead. 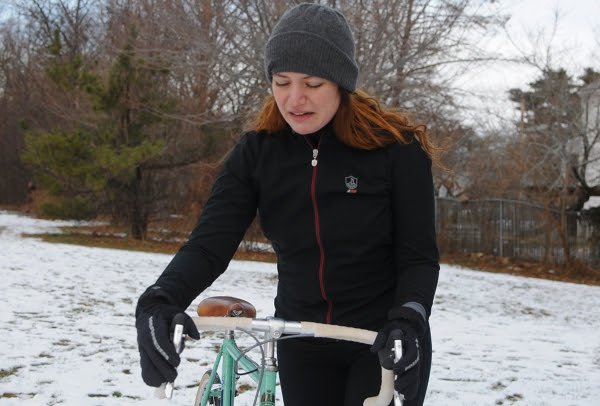 The other challenge of roadcycling in winter, is figuring out how to dress. On an upright transportation bicycle, I can simply bundle up in my regular winter clothes and potter along at whatever speed I am comfortable with until I reach my destination. But when cycling for sport, it is more difficult to regulate body temperature: Most of my body warms up almost immediately once I pick up speed, so bundling up will cause overheating. At the same time, my hands and face are more vulnerable to the windchill than on a transportation bike because of how they are positioned on a roadbike. To find the perfect balance is tricky and can only be done via experimentation.

After resisting "technical wool" for as long as I could, I finally gave into it, because nothing else was working for me. I hope to write a comparison review of some popular wool brands soon, but basically what I am wearing in these pictures are just a couple of thin layers by Icebreaker and I/O Bio, an old wool hat, and a wind-proof cycling jacket. I am embarrassed to admit that the jacket is Campagnolo, but it is the best athletic jacket I have worn, ever, and I should write a separate review of it as well, as it certainly deserves it. 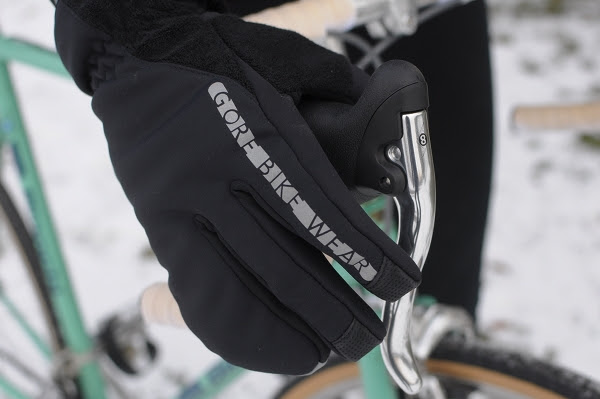 But my most interesting (as in "bizarre") acquisition for winter road cycling are these Gore Bike Wear "lobster gloves". After mentioning in a previous post about my hands freezing when riding with drop bars, I received suggestions from readers for this style of gloves, and the Co-Habitant got them for me as a gift. The concept of "lobster gloves" was new to me, but I was willing to try anything to keep my fingers from going numb when positioned on the brake hoods. These gloves really do make your hands look like enormous, mutant lobster claws, and whether you consider that cute or unacceptably grotesque is a matter of taste. 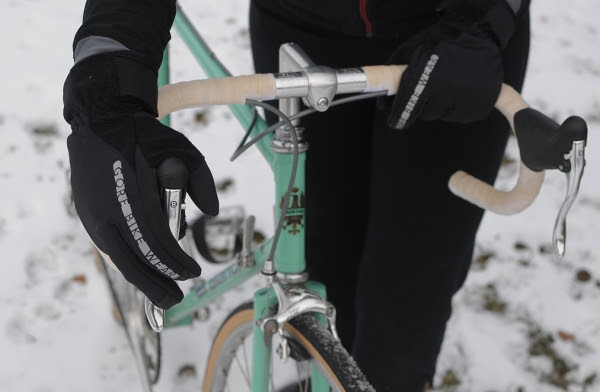 The ideas is, that, unlike regular mitten shells, "lobster gloves" make it possible to squeeze roadbike levers while still keeping at least your pinkie and ring fingers together for maximum warmth. There are different variations of this style, and some versions keep the index finger and middle finger together as well. We went to a local Eastern Mountain Sports store to look for these gloves, and I tried several versions by different manufacturers. I chose the ones by Gore Bike Wear (called "Radiator Gloves"), because they were the only ones that allowed me to freely squeeze the brake levers on the floor model roadbikes they had in the store. Similar-looking gloves by Pearl Izumi and other manufacturers constrained my hands too much and interfered with lever squeezing motions. The sizing of the Gore gloves was unisex, and size 6 fit me perfectly. Normally I wear I size 7 in women's gloves. 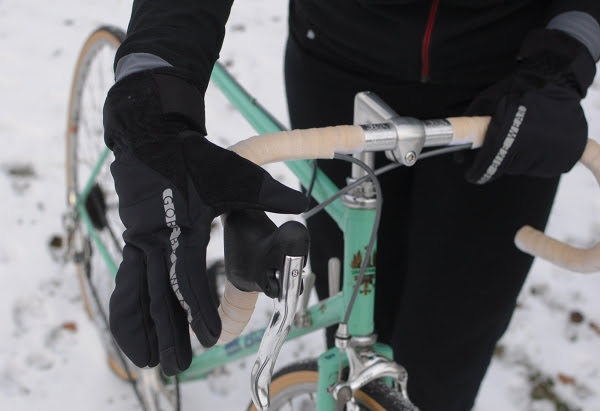 Once I wore the "lobster gloves" in action, I had to make some adjustments to how I positioned my hands on the brake hoods. Braking while wearing the gloves was more difficult than without, but do-able. And they did keep my hands warm, as well as dry. The inside material is soft and silky, and the outside material is textured, preventing slippage on the handlebars. Of all the available choices, I am glad that I got this version. But I would recommend that those looking for gloves in this style try them on in person if at all possible, especially if you have brake lever reach issues on a roadbike. 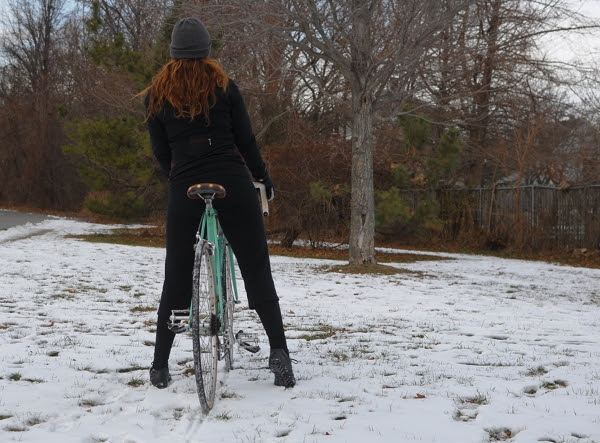 As for the handling of the bicycle itself - the Bianchi was great, except when encountering patches of ice or snow, at which point it was not great at all (think ice skating) and I had to get off and walk. After doing that a few times on the Minuteman Trail, it became clear that the trail was no longer usable at this time of year and it was only really possible to cycle on the main roads. A pity, as the roads leading out of town are usually heavy with traffic and unpleasant to negotiate. By the time I get through Arlington on my way to the more open countryside areas in Lexington, I am usually in a bad mood from competing with the aggressive drivers - not a situation I want to put myself in under slippery winter conditions. The additional difficulties of decreased visibility from my eyes tearing up, and a constantly running nose, contributed to my feeling of extra vulnerability on the road. 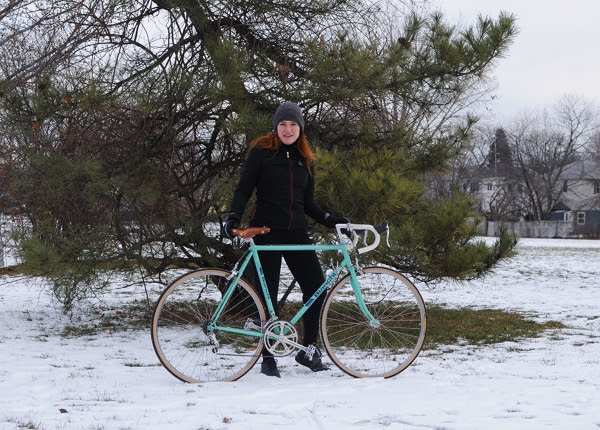 Although this is the closest I've ever gotten to winter roadcycling, it was still far from an actual success - especially since the the emptiness of the roads on Christmas Day is not something I can normally count on. From a logical standpoint, I don't think it's worth it to cycle for sport in the winter under these conditions - particularly for someone like me, whose bicycle handling skills are still relatively poor. But from an emotional standpoint, I am afraid I'll go nuts if I have to stay off roadbikes until late March; I had not realised until now how addicted I've become. Maybe I should snap out of it, be an adult and wait till Spring. Or maybe I should get goggles for my eyes, stuff wads of kleenex in my sleeve for easy nose-wiping access, consult with local cyclist about the safest winter routes, and try again. I guess we'll see how much I really want this. I am not big on setting goals or making resolutions, but I am curious about what will happen next.
Labels: clothing product reviews roadcycling winter cycling