What Our Hands Can Do 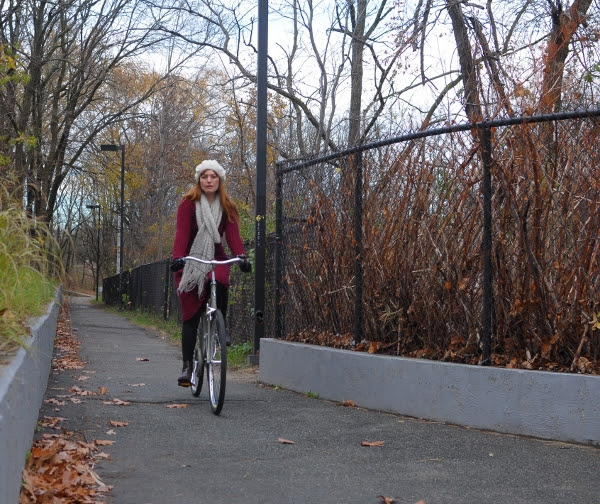 Looking over these photos from the Friday after Thanksgiving, I noticed something interesting: Almost everything pictured here is hand-made. The dress I am wearing was made by my mother. The hat and scarf were made by me. Even the bicycle was hand-made by an Italian frame builder for Bella Ciao. This combination was not intentional, but once I noticed it, I found it striking. 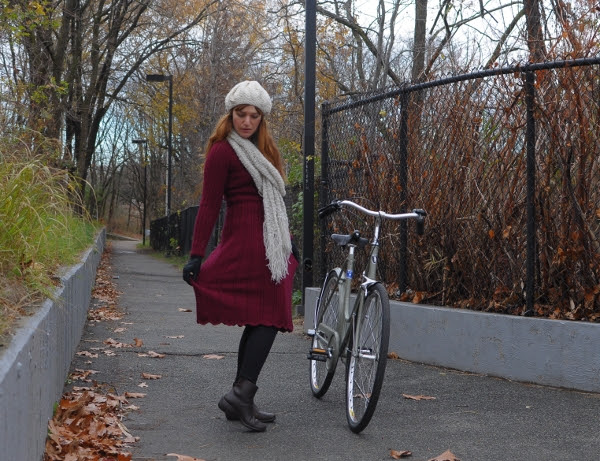 My mother knitted this elaborate wool dress for herself in the early 1980s and wore it all through her 20s and 30s, after which point she gave it to me. The dress suited her much better, but that has not stopped me from wearing it since I were a teenager. It only occurred to me recently how remarkable it is for a dress like this to survive being worn for three decades by two different women - neither of whom are at all gentle with their clothing. And yet here it is, still looking fresh and current. The tailoring, the textural variation, and the attention to detail are incredible by today's standards - and my mother made tons of this stuff when I was a child, while being a busy career woman, too. (I remember seeing her knit while speaking on the phone and reading a book about mathematics at the same time... ) 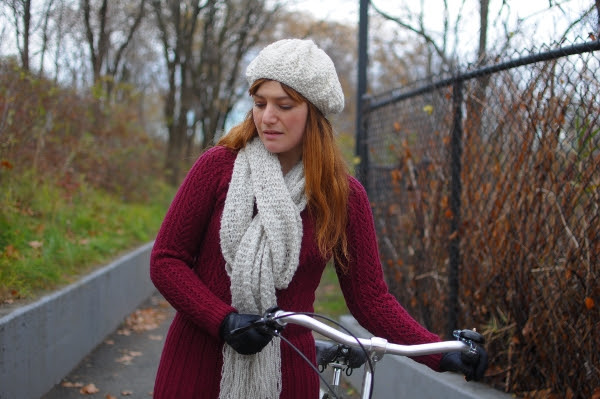 While my own attempts at knitting are fairly pedestrian compared to my mother's past projects, they do have one feature in common: longevity. I knitted this scarf back in grad school, and 8 years later it remains alive and well, while countless store-bought ones have since fallen apart. My friends, for whom I've made clothing as far back as high school, give me the same feedback - some of them still wear the things I made in the mid-'90s. Noticing this was a big reason why I started to knit and sew again this year: I am not that great at it, but the stuff I make lasts and fits me better than store-bought. 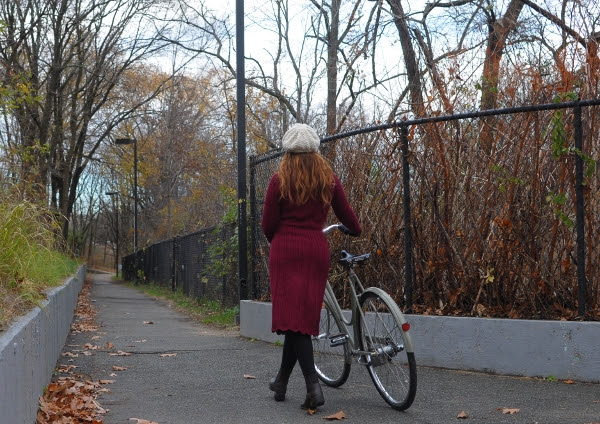 Over this past year I have done something a little nuts: I've sold or given away most of my clothing - stuff that I had collected and saved for more than 10 years. When I was younger, I was into edgy fashion and quirky designers, but lately that interest has all but faded - replaced by a curiosity regarding how far I can go making things on my own. Aside from knitting, I have been cutting up some of my remaining old clothing and handsewing "new" clothes out of it. Hopefully I will get a sewing machine for the holidays, which will allow me to take things further. In the past I have dabbled in making my own fountain pens as well. And eventually - maybe, just maybe, I would like to try my hand at building bicycle frames - or at least designing them à la Grant Petersen.

While my framebuilding days are not yet on the horizon, I do have enormous respect for bicycles hand-made by others, and an insatiable curiosity about the process. Whether independent framebuilders such as JP Weigle, Peter Mooney, Royal H. and ANT, or small manufacturers such as Mercian, Rivendell, Velo Orange and even Pashley and Bella Ciao - I am impressed by the sheer amount of work and consideration it takes to get the design, the construction, and the finishing just right. The more I learn about the process, the more overwhelming it seems. In a world of homogenous, mass-produced goods, it is amazing to witness what our minds and our hands are capable of creating.
Labels: Bella Ciao clothing framebuilding skirt social commentary