While a diamond-frame bicycle can be easily lifted by the top tube, a step-through frame does not have one - posing the question of how to hold the bike when picking it up. This becomes especially important when the bicycle is on the heavy side and frequently needs to be carried up and down the stairs. In the course of owning a number of loop frames, I have found that different bicycles require different approaches in this regard. My Bella Ciao bicycle likes to be picked up by the rear portion of the curved top tube. This is such a stable position that I can even carry it with one hand without the bicycle buckling. When held in this manner, I feel that the bike's center of gravity is directly under my hand, which is probably what accounts for the stability of this position. Also, my hand is snugly stuck in that little space between the upward sweep of the curve to one side and the top-downtube connector on the other - an important factor, because this way my hand cannot slip, even if the bicycle is wet from rain. 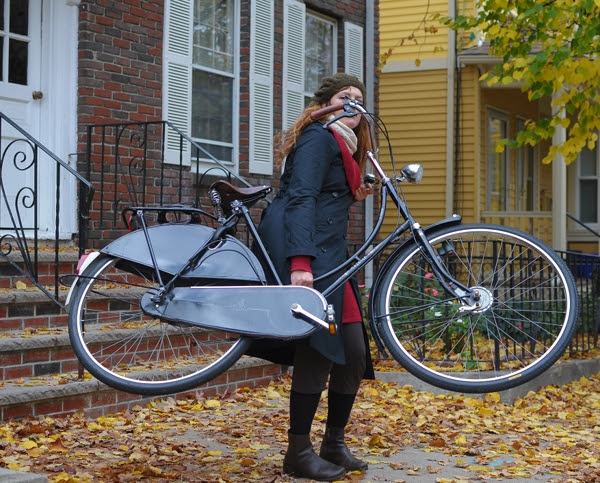 By contrast, this is what happens when I attempt to lift my Gazelle in the same manner. It's not that the bicycle feels too heavy - in fact, lifting it by that loopy spot makes it feel lighter than otherwise. But something is off in the balance, and the Gazelle tries to flip over sideways, onto me, when held in this manner. It feels as if the center of gravity is not under my hand, but somewhere else. With the Pashley Princess I previously owned, this effect was even more pronounced - when lifted by this portion of the frame, the bicycle seemed to twist in my arms and threaten to bring both of us down. On the other hand, the vintage Steyr Waffenrad I rode in Austria was amenable to being picked up by the top tube of its "swan" frame. For reference, my Pashley was somewhere in between the weight of the Gazelle and the Bella Ciao, and the Steyr was as heavy as the Gazelle  - so again, it is not merely a matter of weight. 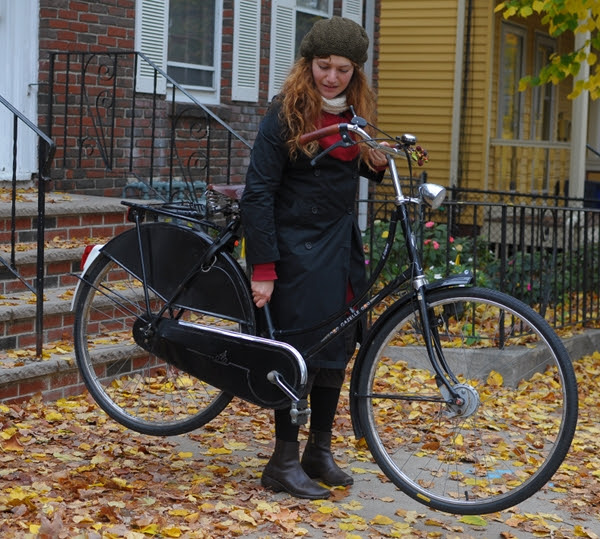 This is how the Gazelle wants to be lifted: by the seat tube. It stays stable and does not buckle when grasped in this position, despite feeling heavier than in the previously shown method. Could it be that for bicycles that prefer this method, the center of gravity is more toward the rear? 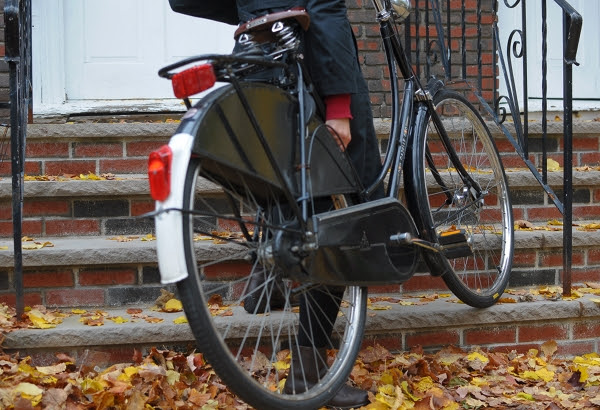 To get my bicycles home I must carry them up the porch stairs, through a narrow doorway, and then through another narrow doorway, after turning around in a cramped hallway. That may not seem like a big deal to those who have several flights of stairs to negotiate, but consider that I am a female with limited upper body strength and a bicycle like a Gazelle or a Pashley is half my weight once it's loaded with bags. Getting a good grip on the frame is key if I don't want to drop the bike or, worse, have it fall on top of me. If you own a heavy step-through bicycle, how do you lift it and how do you carry it up the stairs?
Labels: Bella Ciao Gazelle loop frame technique