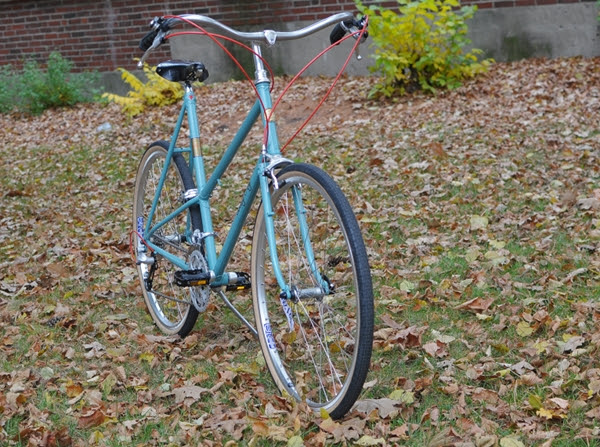 After last week's review of the Rivendell Sam Hillborne, it seemed appropriate to follow up with a test ride report of the Betty Foy. I have ridden her a couple of times before, but never had my camera with me until now. Harris Cyclery has just built up a new floor model in my size - so I took the opportunity to take some pictures and put my impressions into words. While the pictures reflect how this particular bicycle was built up, keep in mind that it is fully customisable: You can change everything from the saddle and grips, to the handlebars and pedals, to the type of components that are on the bike. 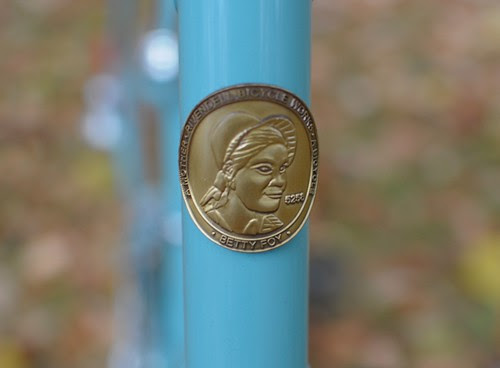 Rivendell released the Betty Foy in Spring 2009, in conjunction with the diamond frame Sam Hillborne model. Inasmuch as a hand-built, niche-market bicycle can "sell like hotcakes" I believe the Betty does. She is charming, comfortable, and tough - and the ladies love her for that. The price of the frame alone is $1,000 and a fully built up bike starts at $2,200 or so, depending on the options. To see how this bicycle compares price-wise to other lady's frames in its class, please visit my new Semi-Custom Options page (now linked in the upper left-hand corner). 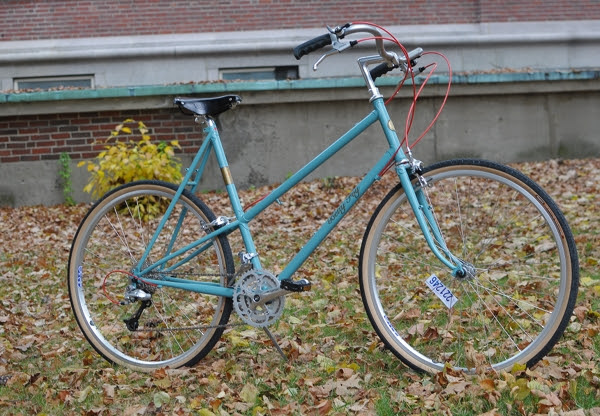 In terms of construction, the Rivendell Betty Foy is a version of the mixte frame: What starts out as a sloped single top tube splits into two stays at the seat tube and continues (at a slightly different angle than the slope of the main top tube) all the way back to the rear dropouts. The frame is lugged, with custom-made lugs in the shape of hearts and elaborate filigreed designs. 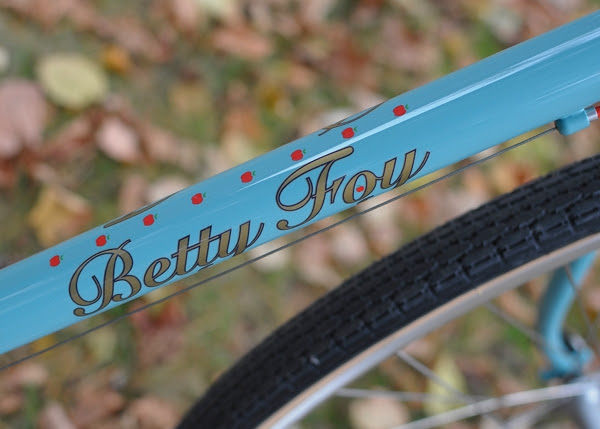 There are many cute and feminine touches, such as the downtube decal featuring tiny red apples 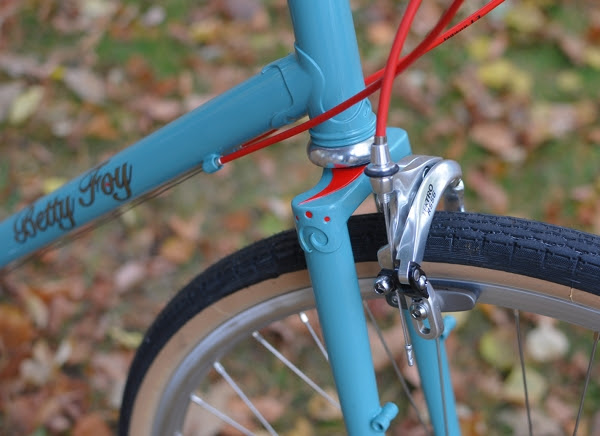 and the filled-in curly-cues on the fork crown. Some of the lugs are also filled in with red, complementing the robbin's egg-blue of the frame. 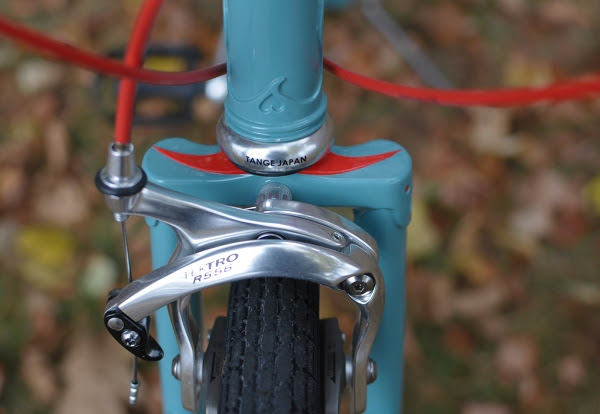 The Betty Foy frame is available in several sizes (47cm, 52cm, 58cm and 62cm), with the middle two built for 650B wheels, the largest built for 700C wheels, and the smallest for 26" wheels. There is enough clearance for 40mm tires plus fenders. 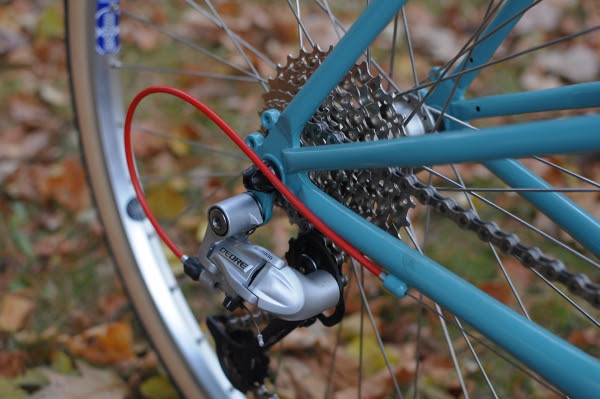 The frame is made for derailleur gearing, and is typically built up with three gears in the front and eight in the rear. There are eyelets and braze-ons for fenders and racks. 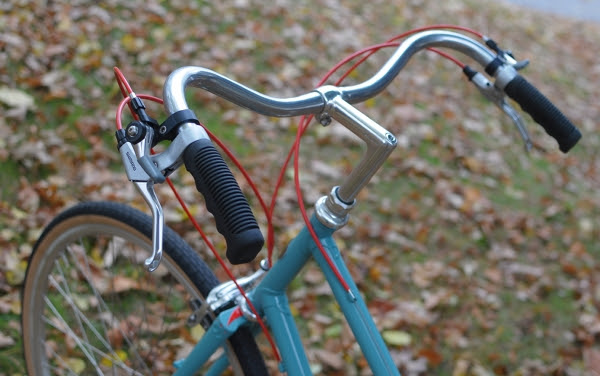 Rivendell states that the Betty frame was designed to be built up with Nitto Albatross handlebars - which are wide and swept back, similar to (but wider than) the handlebars you would find on a vintage 3-speed. I have also seen her built up with drop bars, but the upright set-up is more typical. This floor model was fitted with black rubber grips and "thumbie" shifters, though some prefer cork grips and bar-end shifters. 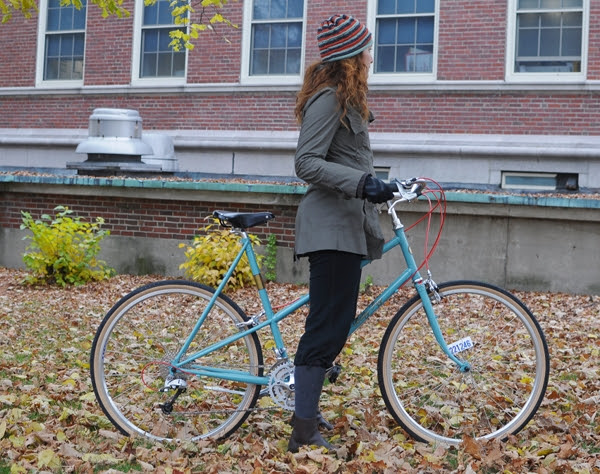 One thing to note about the Betty Foy, is the unusual sizing: The frame sizes recommended by Rivendell seem larger than what a person would normally ride. For example, I am 5'7" and normally ride a 52-54cm road bike or mixte, yet it is recommended that I ride a 58cm Betty Foy. Having tried both the 52cm and the 58cm frames, I can confirm that the recommendation is accurate. The 52cm Betty Foy felt much too small for me, whereas the 58cm version felt just right. I could have raised the saddle by another inch from the position in which it is shown above, but did not feel like going back inside the shop once I started riding the bike.

I rode the Betty Foy on the roads near Harris Cyclery, both this time and the previous times I've tried her. It is difficult to compare her to other bicycles on the market, because really she is unique. If you are accustomed to road bikes and vintage mixtes, you will find the Betty to be considerably more upright, stable, and comfortable. She is more relaxed than a typical 1970s French mixte and has a longer wheelbase. The chainstays are longer, which makes it possible to carry large panniers without "heel strike." And there is no toe overlap with the front tire when turning at slow speeds. I also find the step-over height to be lower than on other mixtes I've tried, which is convenient. 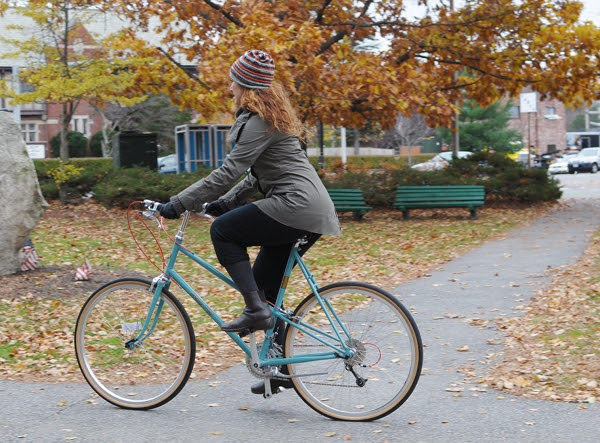 If you are accustomed to Dutch-style city bikes, you will find the Betty Foy a faster and sportier ride, but still within your comfort zone. The posture is slightly leaned forward, but still more or less upright. The derailleur gearing may take some getting used to if you have only dealt with internally geared hubs before, but you will appreciate how easy it makes cycling uphill.

In my view, the Betty Foy's greatest asset is her versatility. If you combine the feeling of a vintage 3-speed with that of a derailleur-geared touring bike, she handles like a union of the two: a fast, comfortable bicycle that feels safe and pleasant to ride. I can imagine riding her around the city for transportation, as well as 20 miles over some hills to the next town over. The ride is soft over bumps and potholes (not as soft as on my Sam Hillborne with 42mm tires, but I would need to ride Betty with equally wide tires to compare). Maneuverability in traffic is good, but the handling is not aggressive. I did not ride her on any serious hills, but with the derailleur gearing, the light frame, and the somewhat leaned-forward posture, I imagine it should hardly be a problem. She is what Rivendell says she is: an "all around" bike. If you plan to have only one bicycle for both urban commuting and long distance cycling, this seems like the closest thing on the market to that ideal. 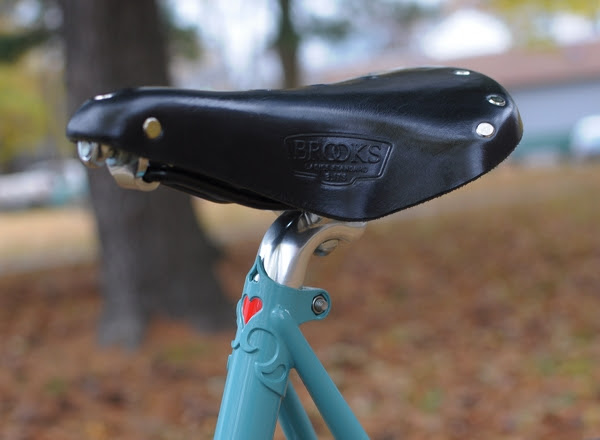 The question I am inevitably asked at this point, is why I did not get a Betty Foy for myself when I was looking for a mixte, if I think she is so great. My main reason, was that I wanted a specific kind of mixte: one with twin lateral stays and proportions that resembled the original French constructeurs. The Betty Foy is not that kind of bicycle. Additionally, I must admit that I find Betty's femininity overwhelming. All the hearts and the bright colours - it's very American 1950s, whereas I am more of a European 1920s kind of girl. This is not a criticism of the bike, but a commentary on personal preferences. 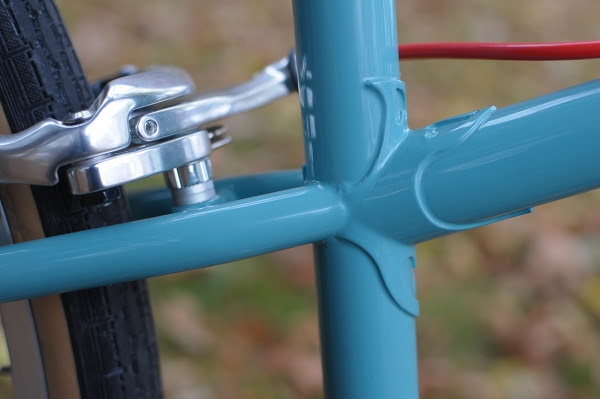 On the OCD side of things, I am also not 100% in love with some of the lugwork - namely at the junction of the seat tube and support stays. My preference would be for something like this to have been done here instead. I recognise how nit-picky and obsessive this quibble is, but little details like this are very personal.

The Rivendell Betty Foy is an attractive and well-constructed bicycle. A great deal of thought went into the design, with a special emphasis on versatility - which I feel has been achieved here better than on other bicycles I have owned or tried. And apparently others agree, as the Betty has an excellent record of owner satisfaction. All things considered, I think the Betty Foy's popularity is well deserved.