Mixte vs Mixte: What's the Difference?

Mixte-frame bicycles have become popular again over the past couple of years, with many women buying them, or considering buying them. But what kind of bicycle is it that they are looking for? Mixtes can differ from one another considerably, both in looks and in ride quality: You cannot assume that because you have ridden one, you know them all. Just to give you an example, I have prepared a side-by-side comparison between my custom Royal H. mixte and the Rivendell Betty Foy. It takes some time to train your eye to differentiate between bicycles that may seem similar at first glance. But see whether you can get a sense of the differences just by looking at the pictures.

To break it down, I will describe the most obvious and significant differences between these mixtes' geometries. And as an aside to the experts out there: If you are cringing at my explanations, please keep in mind that I am trying to make this as visual as possible, as opposed to as technical as possible!

Overall proportions
Take a close look at the overall "body types" of the two bicycles. Despite their being the same size in relation to me, my custom mixte has a "short and fat" look to her, whereas the Betty Foy looks "tall and skinny". That is because my mixte is dominated by the round forms of the large wheels, whereas the Betty is dominated by the angular forms of the large frame. The Betty Foy has smaller wheels, so the frame automatically needs to be larger in order for the overall bicycle to be the same size as mine. This also explains why my mixte frame is 52cm and the Betty Foy frame is 58cm - yet when the bicycles are assembled they are both my size.

The "short and fat" vs "tall and skinny" difference between the two bikes is accentuated by the position of the handlebars. The handlebars on the Betty Foy are set higher, with some stem showing - which further elongates Betty's "body."  The handlebars on my mixte are pushed almost all the way down - which accentuates the round look. Both bicycles were designed to be set up with the handlebars in these respective positions.

If you look at the vintage René Herse mixtes in this post from last year, as well as at some modern bicycles that emulate them, you will notice that they all have similar proportions to my custom mixte. Not a coincidence, because that is the look I was going for. The Rivendell Betty Foy, on the other hand, is a more contemporary take on the mixte and does not conform to this traditional design. Other modern framebuilders have taken a similar approach - playing with proportions to create their own versions.

Another easy difference to spot is the length of the chainstays. The chainstays are those skinny tubes on the frame that run parallel to the ground along the rear wheel. If you look closely, on the Betty Foy these are considerably longer than on my mixte.

Angles
The angles of a frame are actually directly related to the wheelbase, but I am not going to go into this here and will discuss angles separately.

Step-over height
Not related to any of the previous factors, but worth mentioning, is that the Betty Foy top tube is lower than my mixte's twin lateral stays. On the Betty this was achieved by virtue of not continuing the top tube in a straight line after the seat post, but angling it a bit. This angle produces a similar effect to creating a "swoop" or slight loop in the frame's top tube. It is still not as easy to step over as a step-through, but it is lower than other mixtes out there. 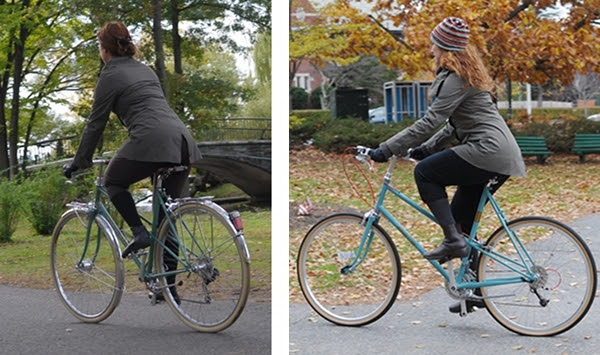 Ride quality
If you have managed to read this far and not fall asleep or close your browser window, you are probably wondering how these features affect ride quality. After all, it is useful to be able to look at a bike and have an idea of how it rides compared to other bikes.

Speaking very generally and summarily, bicycles with a longer wheelbase and more relaxed angles tend to feel more comfortable and stable, whereas bicycles with a shorter wheelbase and steeper angles tend to feel more aggressive and maneuverable. Of all these qualities, comfort is the most subjective - and also depends on other factors (such as tubing material and tires) that are independent of geometry. I would say that my custom mixte is equally comfortable to the Betty Foy - which means that the builder must have done something to enhance comfort despite the steeper angles and shorter wheelbase. As for the other factors, my mixte is indeed aggressive in comparison to Betty, with a ride quality that feels more "zesty." Both bicycles are fast and stable, but mine is quicker to accelerate and a tad more responsive, whereas Betty is more even-tempered.

Either of those qualities can be considered a virtue, depending on the cyclist's needs: A mixte like the Betty Foy is a better idea if you are looking for a relaxed, even-paced ride, whereas a mixte like mine will be more enjoyable if you want something more racy. And it helps to recognise which is which by looking at them.
Labels: comfort framebuilding mixte Royal H