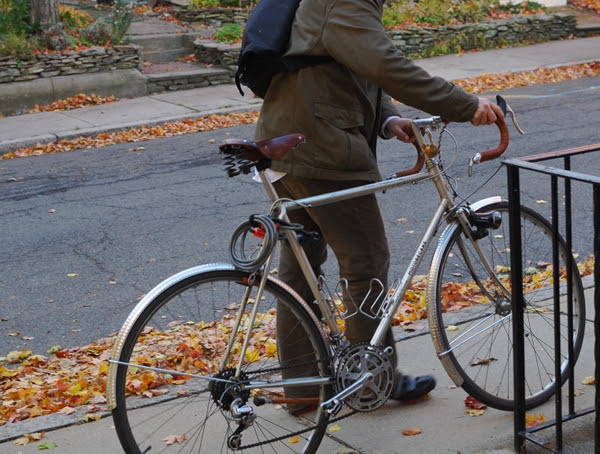 The Co-Habitant started a new job this week, and with it a new commute. The trip is about the same distance as before, but his cycling ritual is much changed. Previously, he rode to work on his fully loaded Pashley Roadster, which he would lock up in the secure bicycle cage inside the building's parking garage. The new job's parking facilities are less secure, and it is in an area where he does not feel comfortable leaving his Pashley on the street all day. So he will now be commuting on his old Motobecane roadbike, which he has stripped down to the bare bones.  This is what Myles looks like in his normal role as touring bike. And above is the new pared-down version: No saddlebag, no twined water bottles, no pump under the top tube. A U-Lock and an extra long cable lock are wrapped around the seat cluster. The battery headlight on the fork is detachable, and the tail light will now be attached to the messenger bag he plans to carry. 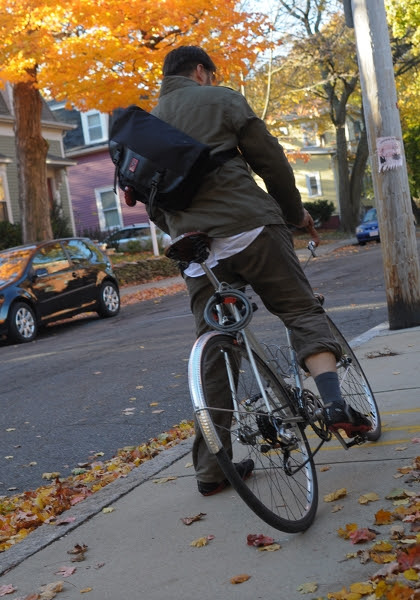 The Co-Habitant's response to his new commute underscores the differences in our attitudes toward bicycle security.  His Pashley is a comfortable, upright bicycle and if it were me, I would continue to ride it despite the change of location and the less than ideal parking situation. I would remove the Pashley's luggage, get a detachable pannier for the rear rack, use a U-lock plus long cable combination, lock it up outside and stop worrying about it. But then again, some would say that my own lock-up methods are scandalously lax, because I typically just use a cable lock. In short, the Co-Habitant and I are separate people and often our views on things differ. I respect that he does not want his "nice" bicycle to get stolen, but it just seems like such a shame to ride an aggressive roadbike (with clipless pedals!) to work and carry all his stuff in a messenger bag, when he owns the perfect commuter bike.
How much of a factor is the location of your job (or residence) in your choice of what bicycle to ride and in your lock-up methods?
Labels: Co-Habitant locking up Motobecane Myles urban cycling