[image via National Library NZ]
For as long as I can remember, the idea of Black Friday has sort of frightened me. The name sounds so dark and sinister - like a day of mourning rather than a day of shopping. And the reports in recent years of shoppers getting crushed to death in stampedes have only strengthened that association. The possibility of someone wanting to save money on something so badly, that they are willing to wake up at 4 am, stand in line waiting for a store's doors to open, and then... walk over bodies in a rush to get to it, is upsetting. What can inspire that kind of drive for acquisition? - a laptop? a beautiful dress? a bicycle? Or just the very notion that "stuff is on sale today" and that "the thing to do is to go out and get those deals"?  Year after year, I find myself recoiling from those messages - not so much in protest against consumerism, as in protest against being expected to blindly follow those crude marketing tactics. 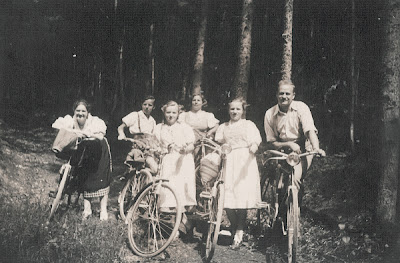 [image via radlmax]
I want to be free to do as I like with my holiday weekend, and I don't want to be controlled by a vague, socially-induced fear of missing out on a bargain. I will buy the stuff I need when I need it. "Black Friday" can fade to black; I am off to enjoy my day!
Labels: social commentary