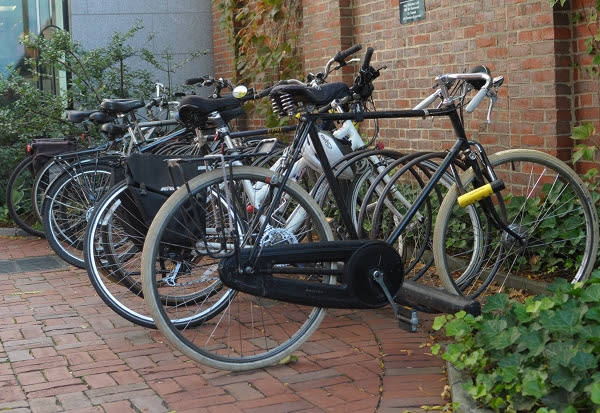 I wonder whether there is a way to get some official acknowledgement naming Boston the vintage bicycle capital of the USA. Because the sorts of bicycles we see here - and take for granted - during our daily travels, are not to be believed. Restored 50-year-old roadsters casually locked up outside office buildings, ancient step-throughs with exotic headbadges and enormous baskets, vintage folders of unknown manufacture used as canine transport - these are just some of the bicycles I see every day as I make my way through the city. Normally, I have no time to stop and photograph even a small fraction of it all, but today the Co-Habitant was with me and a couple of the bikes absolutely required documentation. 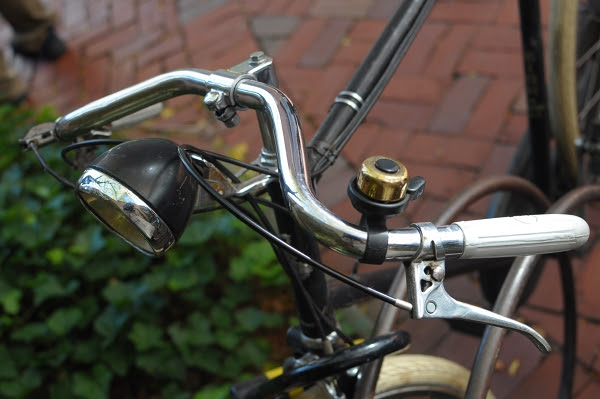 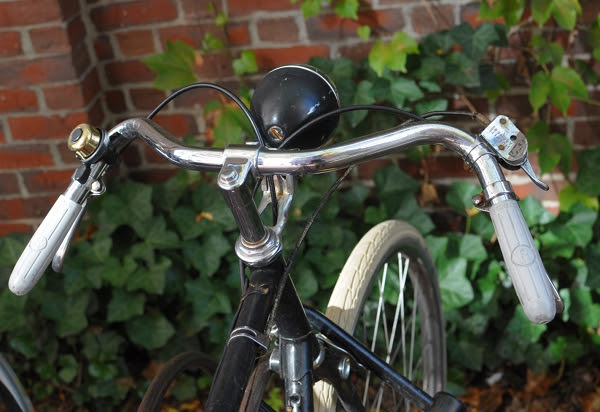 Secured with a U-lock to a bike rack outside a small local university, it looked so natural amidst the mixed crowd of other bikes, including a fully lugged Specialized and a couple of Peugeot mixtes. 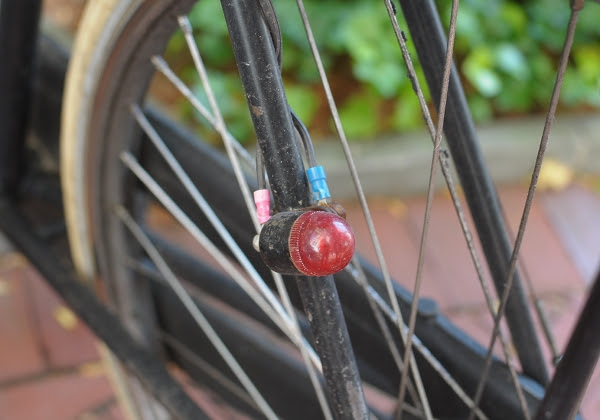 The headlight and tail light seemed functional. These must provide sufficient lighting for the owner's commute, as there were no other lights attached to the bike. Anybody know how powerful they are? 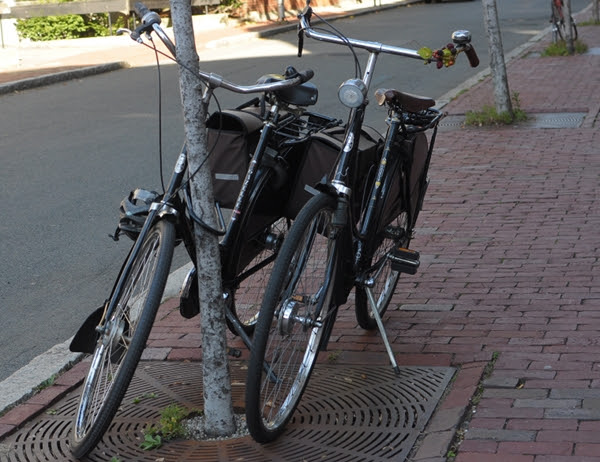 But exciting as it was to see the beautiful vintage Raleigh, it paled in comparison to what we stumbled upon next. Yes, that is my Gazelle, Linda, parked next to... another vintage loop-frame Gazelle. 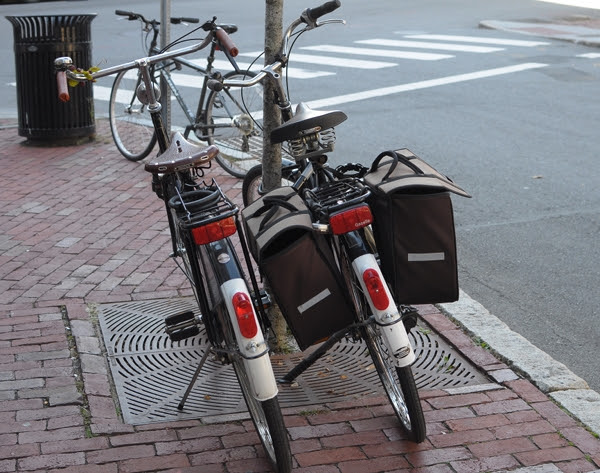 What are the chances? Unlike Raleigh 3-speeds, Gazelle "Oma" bicycles of this vintage were never imported into the USA and were never sold here. 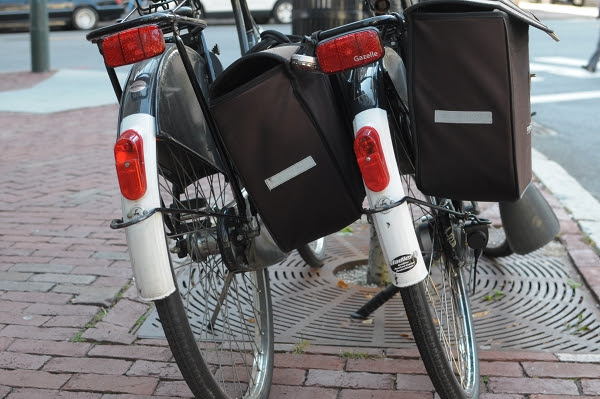 Both my bicycle, and the bicycle next to it, have stickers indicating that they were purchased in Germany (not in the same shop or even the same town). And the (yet another) vintage Gazelle I spotted nearby a year ago, had a Dutch shop sticker on it. The bicycles' owners must have at some point brought them on the plane when moving to Boston, probably for grad school or for post-doctoral positions. 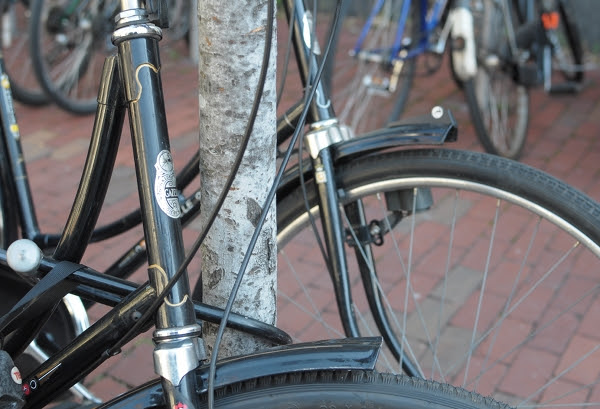 Seeing the other Gazelle and remembering the third one I spotted earlier, made me wonder whether they still belong to the same owners who brought them over from Germany and Holland. Either way, those bikes must have been dearly loved, at least at the time. Transporting a 50lb bicycle on an airplane could not have been easy! 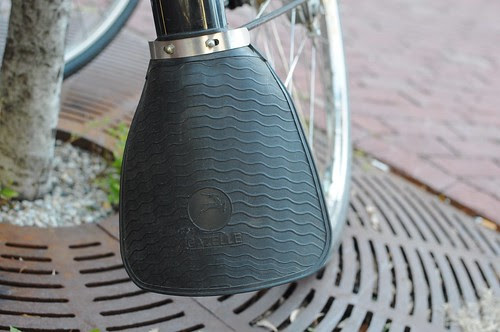 Overall, my Linda was in nicer condition than her neighbour, but one thing that evoked her envy was this mudflap on the other lady. Now she is asking me to get one for her, too. I think a leather one (possibly hand-made?) would go well with her saddle and grips, but I am curious whether these Gazelle proprietary flaps are still sold today. Also, they seem to be attached by a bracket that does not necessitate drilling the fender, but makes use of the existing holes for the stays, which seems like a fairly easy installation method. 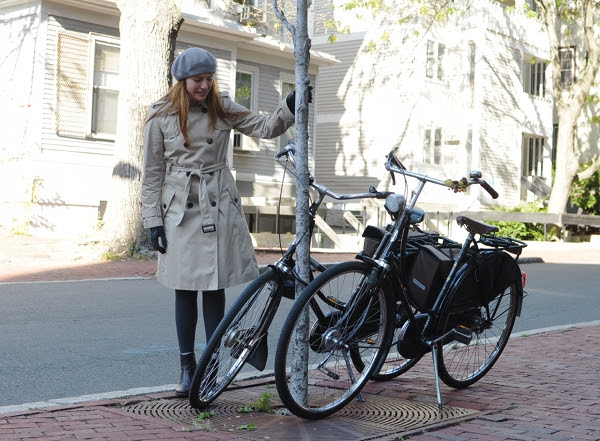 I think that to spot several bicycles like this in an American city is highly improbable. Surely it is proof that Boston is the vintage bike capital? If you have a better story about your city, bring it on!
Labels: Boston Gazelle lights Raleigh vintage