Making an Ordinary Vintage Roadbike Extraordinary (a Review of Sorts) 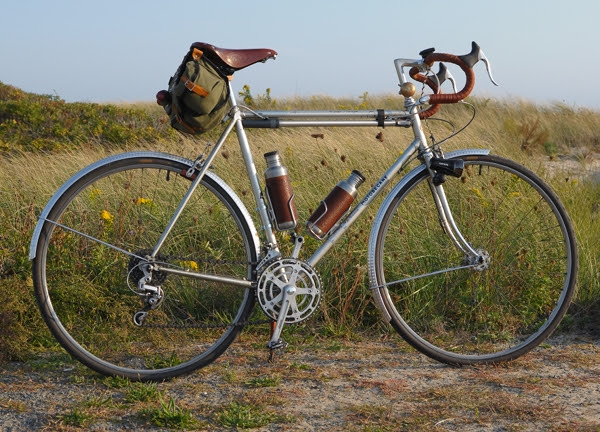 The Co-Habitant's roadbike, Myles, is a 1976 Motobecane Super Mirage, which he acquired in Spring 2009 and has been gradually updating with modern components and personal touches. It is his only roadbike, and he has cycled somewhere between 2,000 and 2,500 miles on it through its various iterations. I wanted to write a review of it (from my perspective), because I think it poignantly illustrates some aspects of owning and customising a vintage roadbike. It is always interesting to observe people's reaction to Myles, for he is a real head turner - even more so than my Rivendell. The silver frame, the hammered fenders, the wealth of brown tones in the leather and twine, the frame pump looking almost like a double top tube, and the classic Carradice bag, somehow combine to create a whole that is more magnificent and eye-catching than the sum of its parts.

On closer inspection, those who know bicycles typically exhibit one of two reactions. Some are delighted to see a good, ordinary vintage bicycle salvaged and turned into a thing of beauty. Others are bewildered that we bothered to so elaborately refurbish something so commonplace, rather than searching for a frame with a more impressive pedigree. While the Motobecane Super Mirage was a good, solid bicycle in its time, it was decidedly middle-tier and for that reason unremarkable. The frame is hi-ten steel, the lugs are fairly basic, and the original components (Suntour, Weinmann) are pretty good, but not excellent. 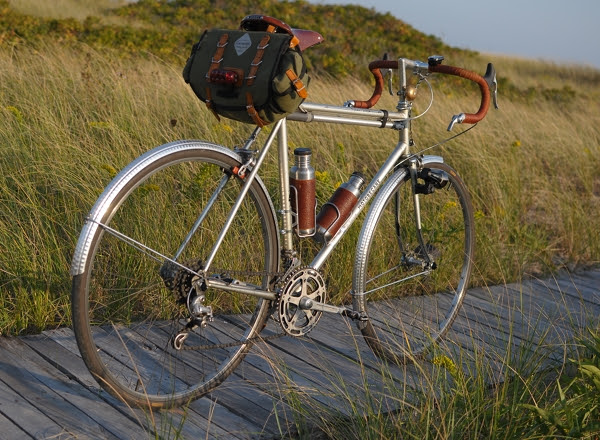 We do not disagree with the point of view that a better frame would have been more deserving of all the DIY lavished on Myles. But sometimes a bicycle just evolves organically, and such was the case here. 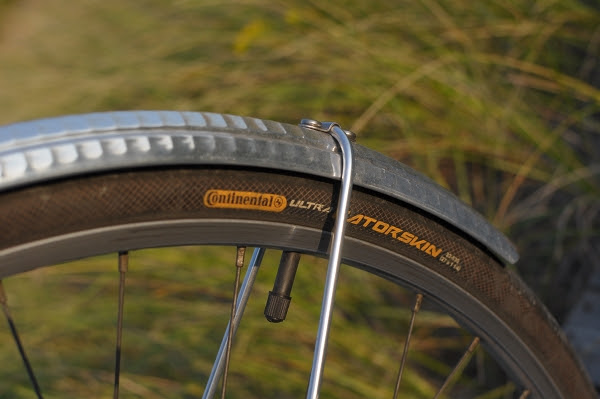 When the Co-Habitant found the bike, used and somewhat abused, the plan was simply to ride it after a few minor changes. He first replaced the tires, after the original ones blew up on his very first ride.  He has ridden these Continental Gatorskins (27" x 32mm) the entire time without incident. 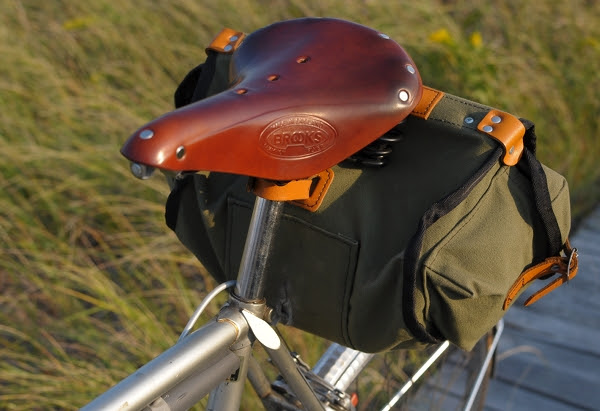 He then replaced the original vinyl saddle with a Brooks Flyer. Early on, he was caught in the rain and the Flyer got wet - which hastened its breaking-in process nicely. 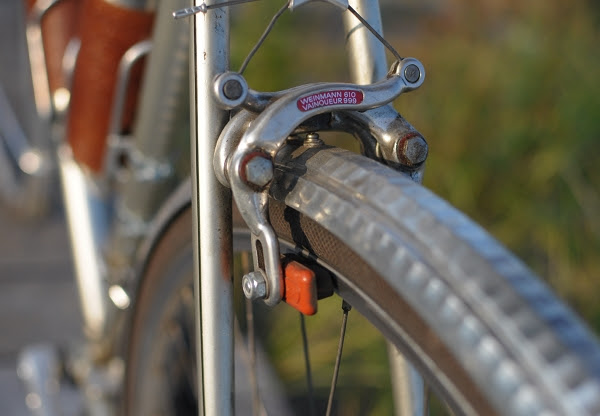 The brakes on the bicycle worked fine after some adjustment, but he did replace the pads with the salmon Kool-Stops. 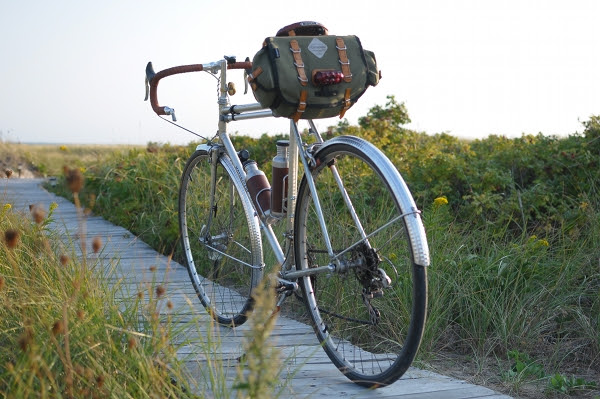 As he began riding the bicycle more and more, he added fenders and a saddle bag. Although I am normally not a fan of hammered Honjos, I think they do look good on silver bikes - providing textural variation where the colour is similar.  Hammered fenders are also a good investment in terms of hiding dents or scratches. 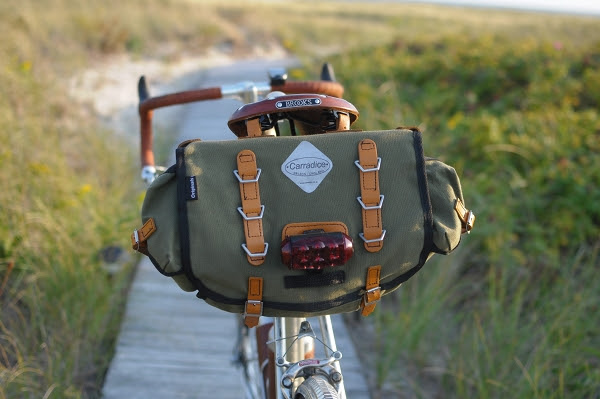 The Carradice Barley bag has been sufficient for carrying anything he needed on this bike, up to our current trip. For the future, he will consider getting a larger bag that can fit laptops, and a rack to support it. Having a saddlebag is also handy for installing a battery-operated tail light, such as his CatEye. 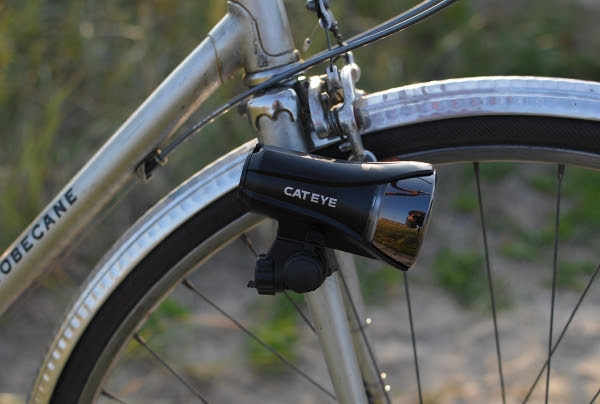 His headlight is mounted on the fork, using a Minoura light mount. While he prefers generator lighting, as far as battery-operated lights go, he likes this system very much. 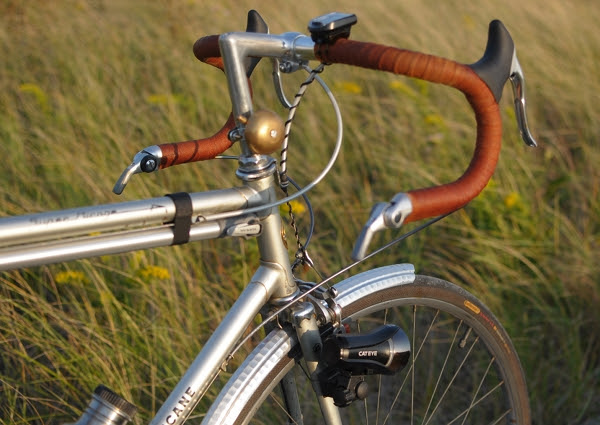 Some months later, he decided to replace the handlebar set-up, as the original one caused discomfort and difficulty operating the brake levers.  He replaced them with 42cm Nitto Noodle bars, which he loves, and the stem with a Nitto Technomic. 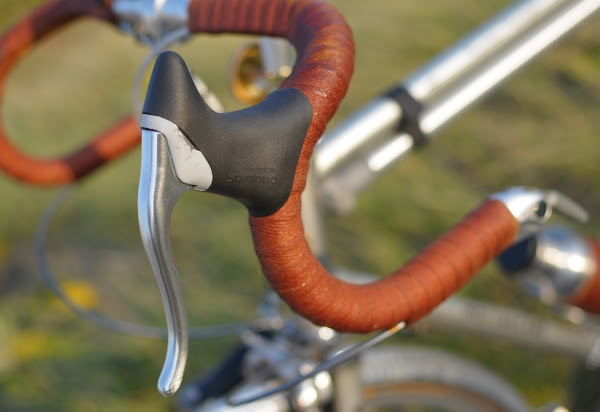 The original non-aero brake levers were replaced with modern Shimano aero brake levers. Personally, I am not a fan of these brake levers, as the hoods have a rather harsh surface and there is a plastic insert that is very easy to damage. The Co-Habitant has dropped and crashed this bike several times, and you can see that the levers look battered. 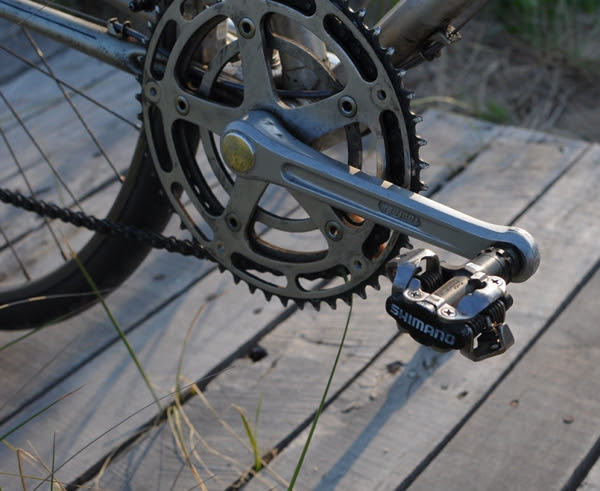 Almost a year later, a few more changes were made. After complaining that his feet always slipped on the touring pedals at high speeds and that toe clips were a bother, he installed these SPD clipless pedals - much to my shock at the time.  He loves them and now says that he would not go back to non-clipless on a roadbike, vintage or not. 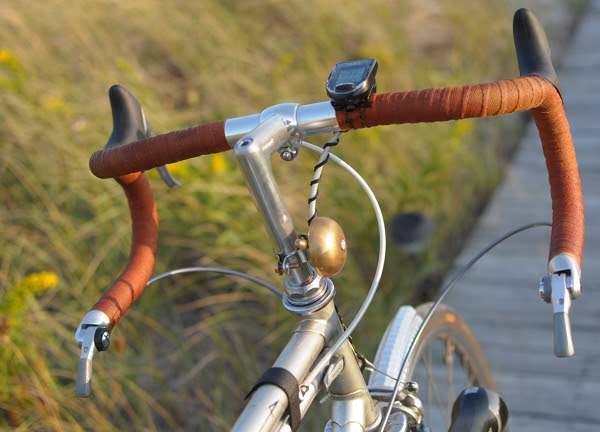 Around the same time, he also installed a CatEye computer to keep track of his speed and mileage, 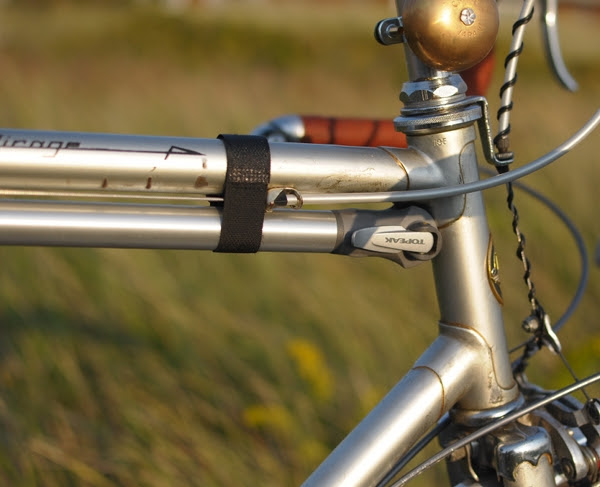 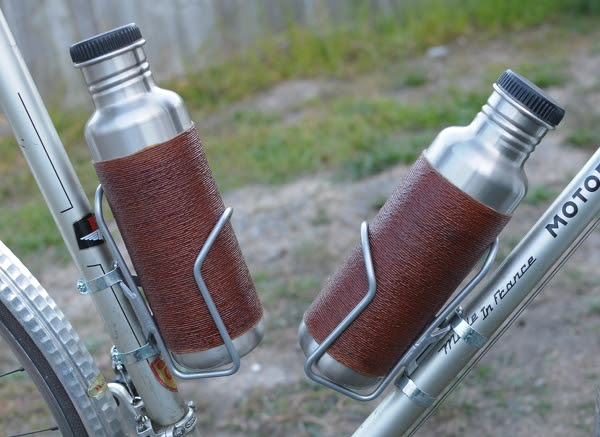 and two bottle cages, bolted onto the frame - into which he places his twined and shellacked Klean Kanteen bottles. 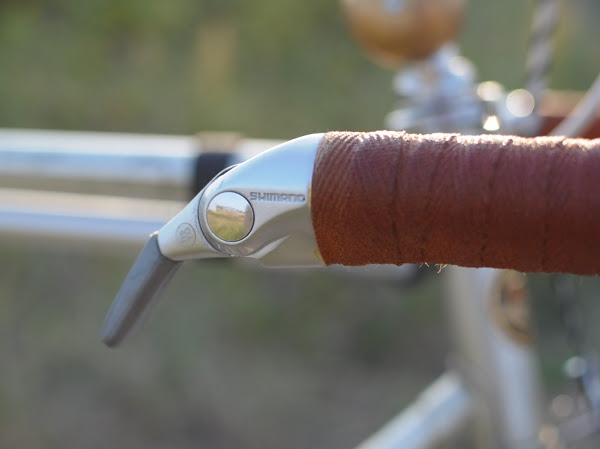 And the final update - completed just a couple of weeks ago in our yard  - was the replacement of the original stem shifters with these Shimano bar-ends. Since the bike is a 10-speed, it isn't possible to get indexed shifting, but these work just as well in friction mode. After having used a shifting method that sounded like a tractor for over a year, the Co-Habitant is absolutely delighted with these - they are fast and quiet, and he is convinced that they are superior even to my Silver shifters (although I disagree). 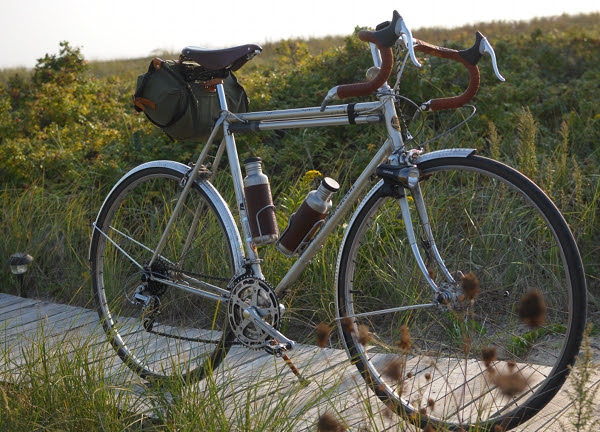 And so that is the story of Myles's slow but steady transformation from a plain '70s French 10-speed to a glorious and shamelessly eccentric dandy. Was it worth it? It certainly helped the Co-Habitant learn about classic roadbikes - both riding them and working on them. It is difficult to get a straight answer from him about how comfortable the bike is, especially as he is more tolerant of discomfort and pain than I am and to some degree even thinks these are "normal" to experience on a roadbike. But from what I can surmise, the bike is more or less comfortable in its current state, except that it places a bit too much weight on the hands and is over-responsive to the point of being "squirrely". Also, the frame size would ideally be larger, and he could do with better gearing. 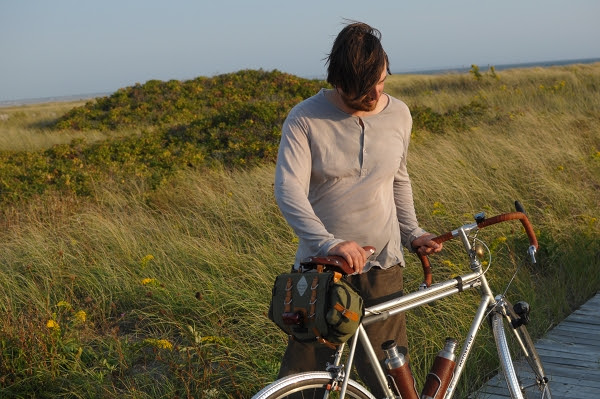 All of these comments, however, are made only in response to my direct questioning; he never complains about the bike on his own accord. On the contrary, he is extremely fond of Myles, smiling and shaking his head quietly at any suggestion that such components ought to be placed on a new frame instead.
Labels: Brooks Co-Habitant fenders Motobecane Myles vintage