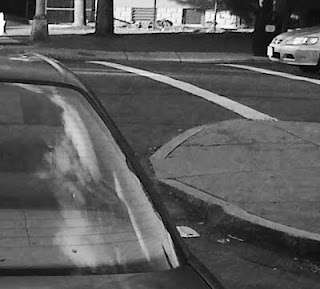 I was cycling across town with a friend today, who suggested that we take the side streets instead of my usual route along the major roads. We were cycling on one of these quiet streets, when a sedan passed us too closely and hit my friend's bicycle with the side of their car.

The impact was not strong enough to knock the bicycle over, but it did happen - and the driver kept going until forced to stop at a red light. We caught up to the driver, and my friend quickly took a cell-phone picture of the license plate - at which point the driver stopped the car and came out, expressing annoyance. My friend said, "You hit me with your car." The driver replied, "Well, you should have been more careful!" (More careful? We were cycling in a straight line in broad daylight!) At that point my friend took out their phone and called the police - telling the driver that they were going to file a report. Bewildered ("The police? But you're fine!") the driver got back in their car, pulled over to the side of the road, and we all waited.

The officer arrived and asked whether anybody was injured and whether there was any damage to the bicycle. When we replied in the negative, the officer seemed confused: "So there is nothing to do here then." We repeated that the driver hit my friend with their car, to which the officer (politely) replied, "Well, if nobody was injured and there is no damage to your bicycle, that's not a crime. That's an accident." He then proceeded to file a report of the "accident," stressing verbally that there has been no injury or material damage. Both my friend and the driver gave testimony, and I gave testimony as a witness. We were then informed of where and when we could pick up a copy of the report, and everyone went their separate ways.

And this brings me to my question. Is it correct, that unless a driver actually injures a cyclist or damages a bicycle while hitting them, then hitting a cyclist in itself is not illegal? That is basically what the officer was telling us, but it does not sound right to me. What about the "passing no closer than 3 feet" rule? If a driver hits a cyclist while passing, does that not automatically mean that they were closer than 3 feet?  The driver was unapologetic about what happened, and did not deny that they saw us prior to hitting my friend's bicycle. Yet the officer did not even ask the driver why they did not pass us at a safer distance. Perhaps what the officer meant to express, was that there was no way to determine what actually happened without video cameras or tangible evidence (such as injury or damage to the bicycle) - but his words did not come across that way.

Regardless of the outcome, I am glad that my friend filed a report. As I understand it, these things get entered into the DOT statistical data, and can lead to the development of safer infrastructure on that street if enough such incidents are reported. But I remain confused about what type of collision between motor vehicle and bicycle constitutes an illegal act versus what constitutes an accident. Can any of the cycling activists out there fill me in?
Labels: Boston cars traffic urban cycling