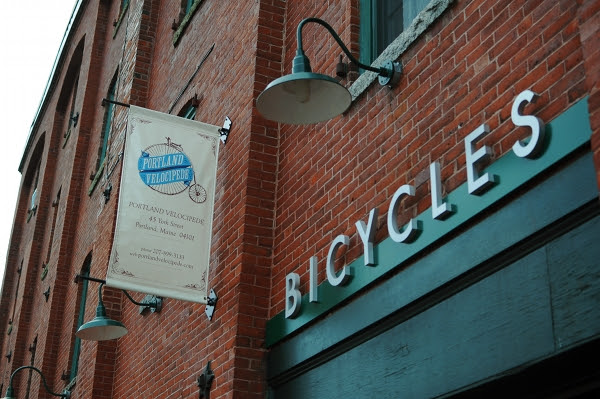 [edited to add: Portland Velocipede became a sponsor of this website in January 2011. This post was written prior to that time.]

We were in Portland, Maine (the real Portland!) over the weekend, and stopped by the Portland Velocipede. The establishment is just half a year old, but already an iconic presence. 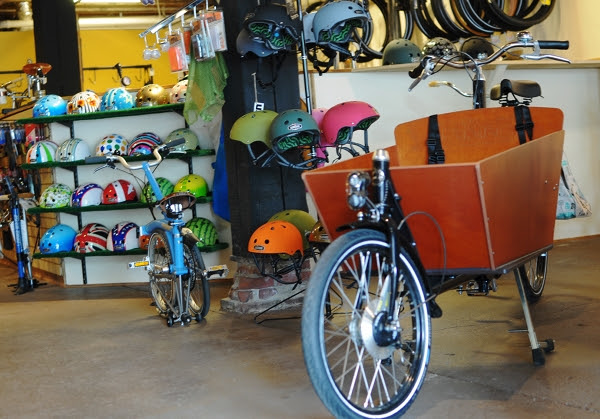 Portland Velocipede focuses exclusively on transportation cycling. They sell Pashley, Gazelle, Batavus, Abici, Linus, Civia, Brompton and Bakfiets - as well as accessories by Brooks, Velo Orange, Basil, Po Campo, Nutcase, and more. As far as I know, no other bike shop on the East coast outside of NYC stocks this type of merchandise all at once. The shop occupies a huge, warehouse-style space that was once an art gallery, and they certainly make good use of that space. Almost an entire wing is dedicated to a flock of Pashleys. The Roadster, the Guv'nor, the Princess, and even the Tube Rider - they have them all. 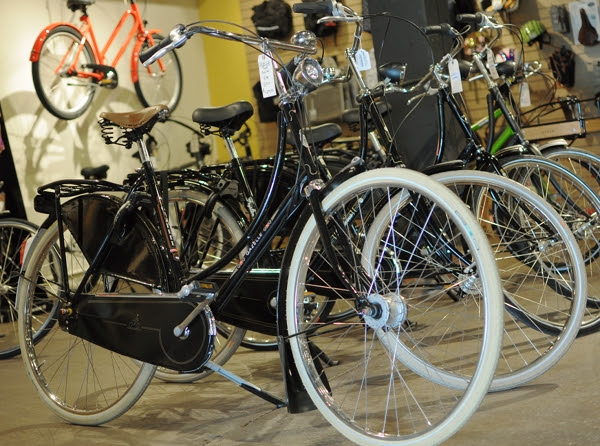 In another part of the shop stands a herd of Gazelles, as well as several Batavus models (the Old Dutch, the Flyslan, the Bub and the Personal Delivery). 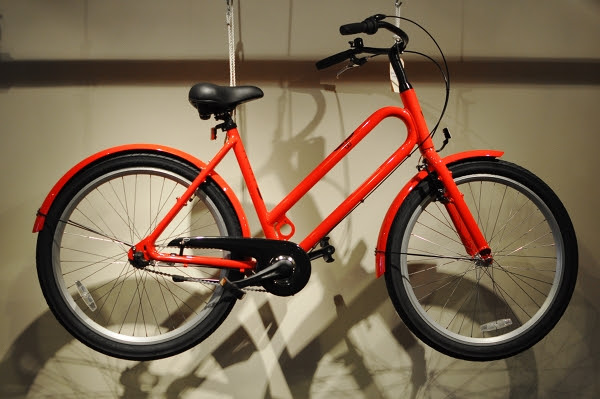 The famous "paperclip bike" (Batavus Bub), suspended from the ceiling. 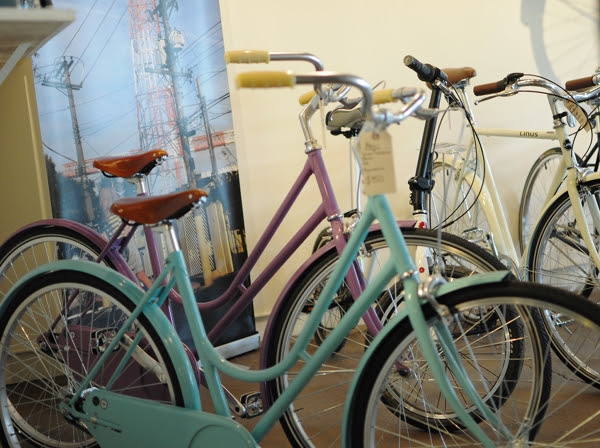 For me, the main point of interest were the Abici bicycles, which I had never seen in person before. This shot reminds me of the "I want candy" scene in Sofia Coppola's Marie Antoinette. The colours, the colours! Well, I have now not only seen an Abici bicycle in person, but have ridden one all over Portland.  I will post a test ride report shortly. 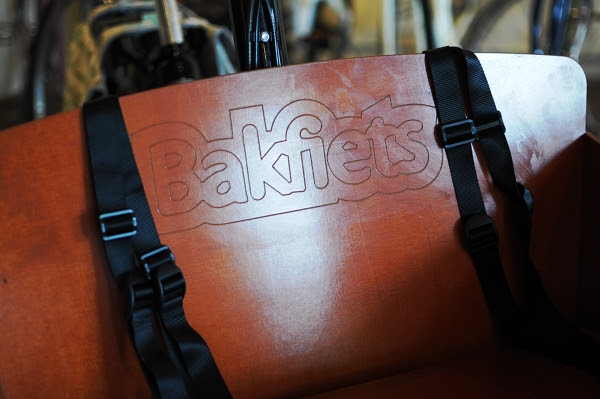 I had also never seen a Bakfiets in person before. Those things are beautiful! The Co-Habitant immediately wanted to cart me around in one, but I opted out of that form of entertainment. (Well, maybe next time!) 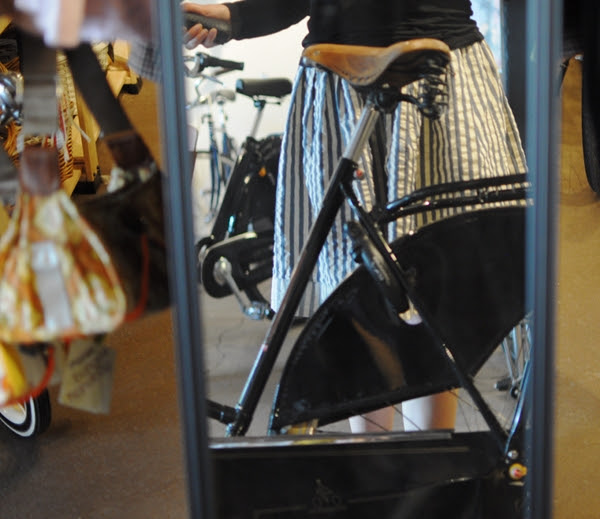 Instead I examined the Gazelle Toer Populair, which is the contemporary version of my Gazelle A-Touren. It saddened me to see that the Gazelles currently in production are not manufactured in the same manner as my late 1990's model. The "loop connector" is now welded rather than lugged, and the seat cluster is partly welded as well.  It is still a beautiful bicycle, but why are manufacturers of classic bicycles moving in this direction? I suppose it cuts costs, and they figure customers will not notice or will not care? It is a sad thing to lose such beautiful details. Thankfully, the fork crown on the Gazelle is still lugged and chromed with the little embossed gazelles on it, and its lugwork elsewhere has remained the same as well.

Having now seen Gazelle, Batavus and Pashley side-by-side, I would say that the quality of craftsmanship is by far the highest on the Pashley, with Gazelle in second place and Batavus in third. If I had to buy a new bicycle today and choose from what is available in American shops, I would probably still choose a Pashley Princess (albeit I would now go for the largest, 22" frame). 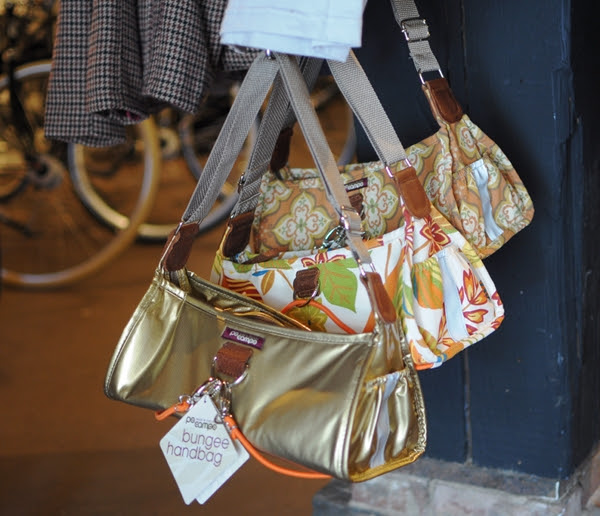 Whether you turn your eye to the bicycles, to the accessories, or to the clothing, Portland Velocipede is a sea of gorgeous colours and inviting textures. 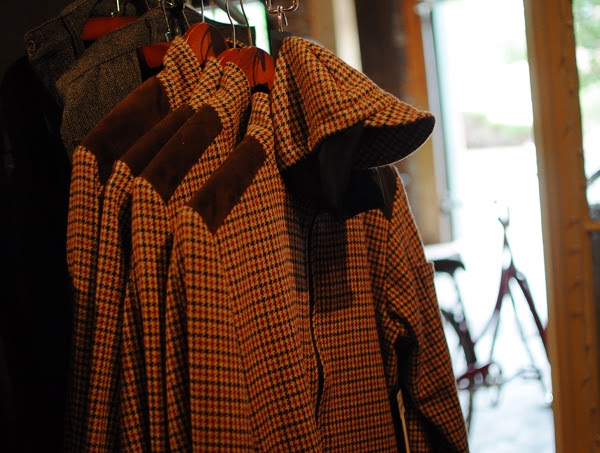 As I wandered around the shop I felt as if I was lost in some alternate universe: Too much, too beautiful! Some of the items I knew about, but have never seen in person - and now here they were, all together. Other items were new to me, such as the clothing line by Sheila Moon (pictured above), and a spectacular line of panniers from Linus. I wish I'd had the presence of mind to photograph it all systematically, but I am a mere mortal and cannot be expected to remain calm in this kind of bike shop - so this is what you get. As mentioned earlier, we did extensively test-ride bicycles: I rode a lilac Abici and the Co-Habitant rode a Pashley Guv'nor, so reports are forthcoming. 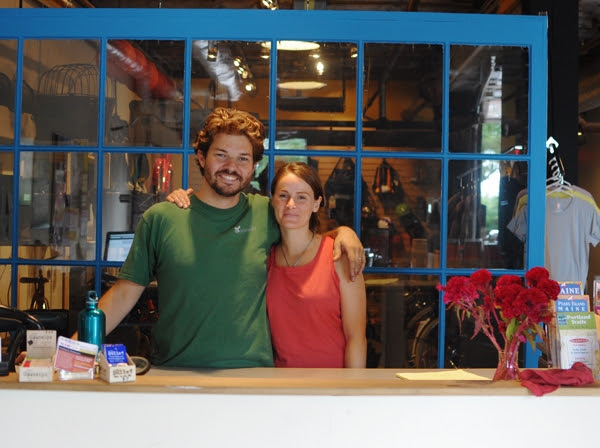 Amazingly, the charming owners (Gillian and Josh) trusted us not to abscond with their precious candy-coloured inventory - for which we thank them!  We also thank them for establishing this wonderful shop in New England, and for all the energy and care they obviously put into it. Portland Velocipede is a magical place and an invaluable resource for those interested in classic transportation bicycles.
Labels: Gazelle local bike shops Maine Pashley