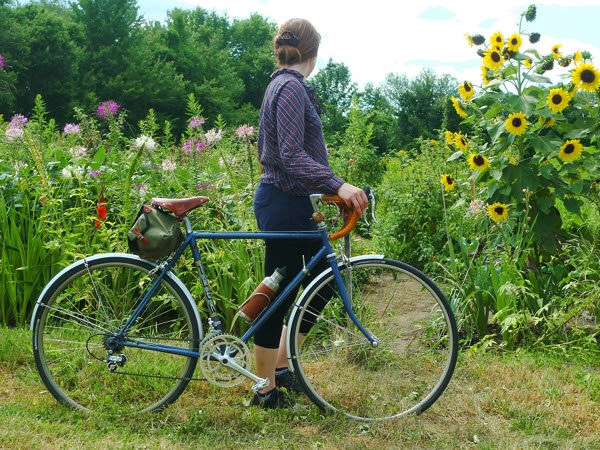 As some have already noticed, I recently acquired one more bicycle that I have not yet written about. It is a vintage Trek roadbike - fast and aggressive, with super-responsive handling. Don't ask how I got the bike; sometimes these things just find you. It was in exactly my size, and came along at a time when I had begun to experiment with more aggressive road cycling. I wanted to try a "real" roadbike without spending more money, and here was my chance. 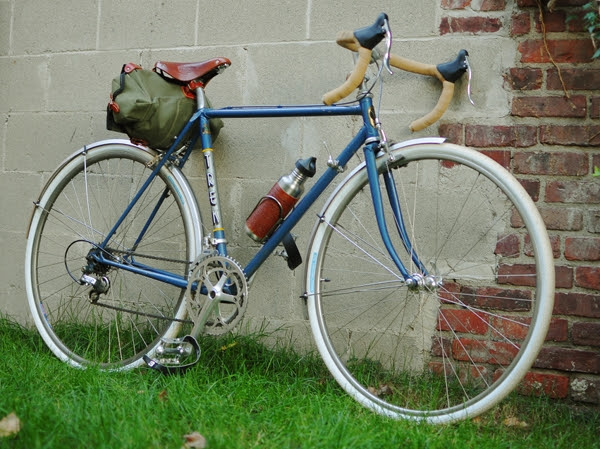 So please allow me to introduce Seymour Blueskies. He is a Trek 610, built in 1982. The lugged steel frame is made with Reynolds 531 tubing, and cro-moly fork and stays. The frame is 52cm, with 700C wheels. It is an interesting blue-gray colour that Trek called "gunmetal"in its catalogues. 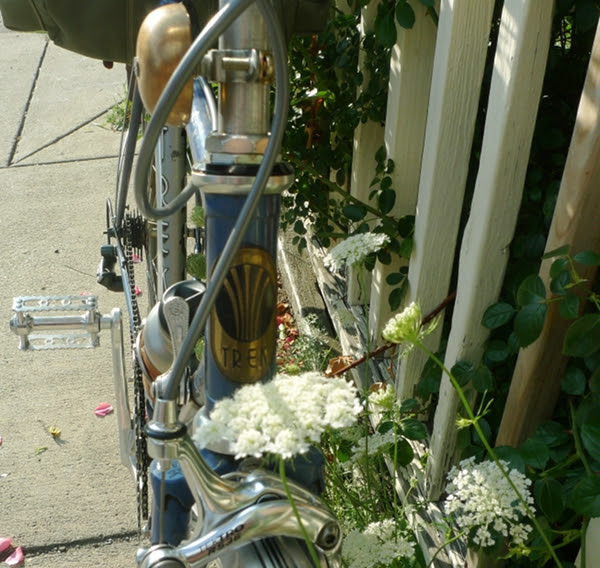 The 610 was a higher-end model, and the previous owner built it up with nice components - though over the years they had become somewhat of a medley. 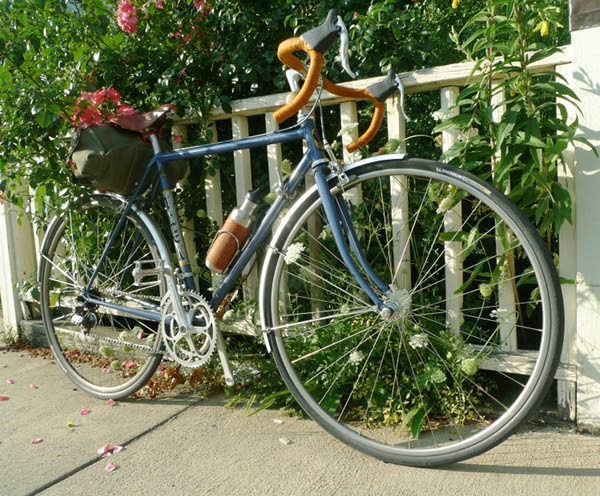 The wheels were handbuilt using Rigida racing rims with a gunmetal finish, a Campagnolo rear hub, a Suntour XC 9000 front hub, and double butted spokes. The drivetrain is Suntour Sprint 9000, with Suntour downtube shifters. The stem is vintage Nitto and the handlebars are ITM. The bicycle also came with a Brooks Finesse Titanium(!) women's saddle. 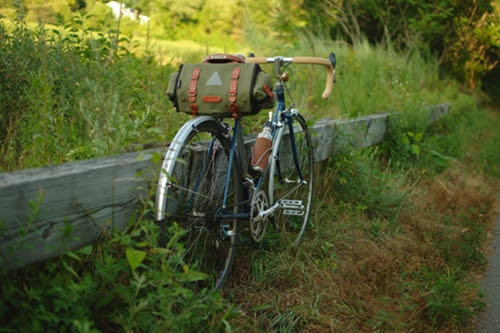 I have kept all of the components as they were, except for the brakes and brake levers, which we replaced with new Tektros. We also added cork bar tape, installed SKS fenders and a bottle cage, replaced the original clipless pedals with MKS Touring pedals (with Powergrips), and attached my Zimbale bag and a Crane bell from another bike. 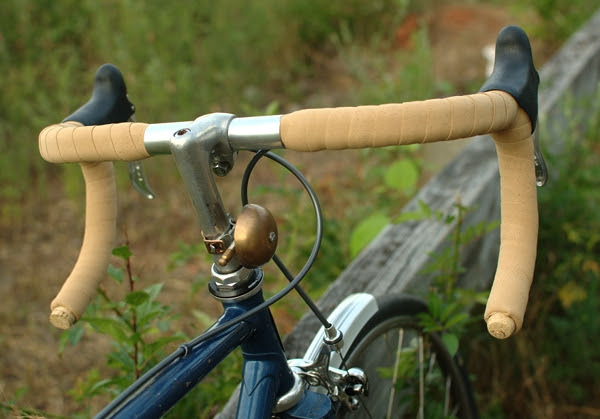 I prefer cloth tape on handlebars, but these bars have a weird, squared-off shape to them with a carved-out channel for cable routing. This can all be felt though cloth tape, making the bars uncomfortable to hold without a layer of cork. They are also a bit too narrow for me, and if the Trek ends up being a keeper I would like to replace them with something like Nitto Noodles, or a vintage equivalent. 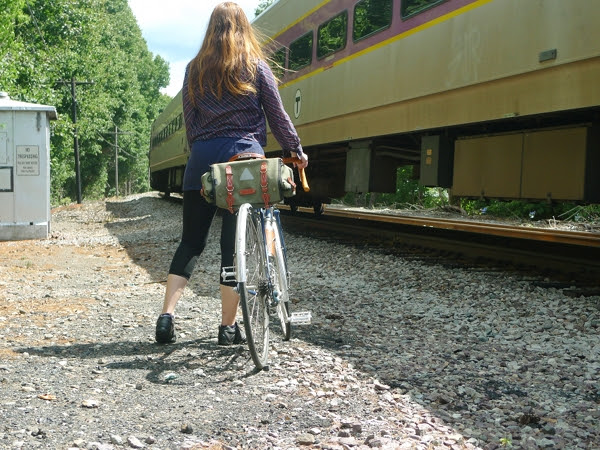 The reasoning behind the SKS fenders was initially budget-driven, but I am very happy with this choice. They are quieter and less fussy than Honjos; I hardly even notice them. The Co-Habitant hates SKS fenders, because he thinks they are "ugly". I do not find them "ugly";  just more sporty than Honjos - which was exactly the look I was going for here. Incidentally - even with the fenders, saddlebag and waterbottle, the Trek is the lightest bicycle I own. 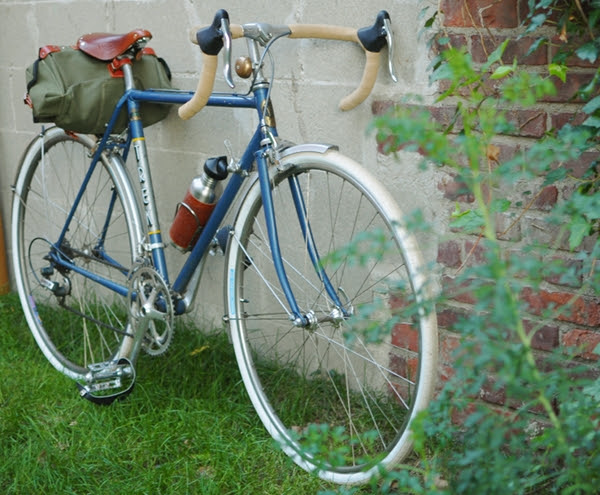 After a few weeks of ownership, I have also just replaced the original Michelin 25mm tires with 28mm Panaracer Paselas in white. The Michelins that came with it are supposed to be fantastic, but they felt hard as rocks and made for a very harsh ride. The Paselas, on the other hand, feel as if I am riding on a cloud. 28mm tires are probably the widest this bicycle will fit with fenders, and that is fine with me. 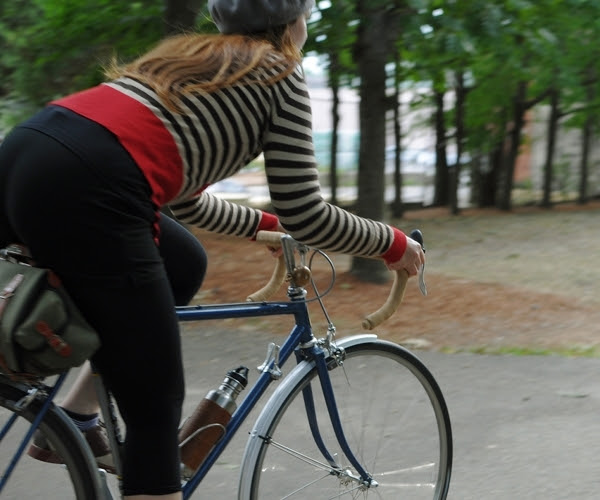 Now, for the ride quality... The vintage Trek handles very differently from the Rivendell Sam Hillborne. The best way I can describe this bike's behaviour, is that it wants to go fast and does not like to go slow. At slow speeds the Trek feels unstable and difficult to maneuver, especially when cornering. It took me a few rides to learn how to handle this without panicking, but eventually I got used to it. By the same token, it becomes amazingly stable and precise at fast speeds: Once I exceed 16mph, it seems to magically "relax" and almost floats above the asphalt. Accelerating is easy - almost too easy! One turn of the pedals, two turns - and before I know it, I am flying.  This is great fun now that I am more or less comfortable on a roadbike, but even a couple of months ago I would not have been able to handle this kind of cycling. When riding the Hillborne, I feel that I am exploring - I can go fast, or I can go slow. Riding the Trek, I feel that I preparing for a race - going slow is not really in the cards. 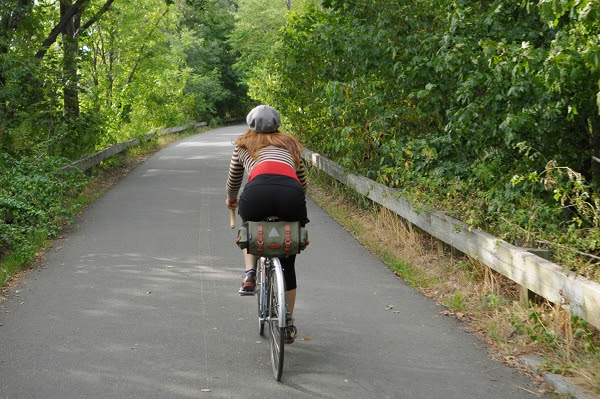 All other factors remaining equivalent (road and traffic conditions, my energy levels, etc.), the Trek is a faster ride than the Rivendell. I cannot tell how much faster exactly, because conditions are never identical on any two rides - but when the Co-Habitant accompanied me, he said the difference in my speed on the two bikes was noticeable. One explanation for this could be that the Trek's handlebars are set lower, but it could also just be that the bike is designed to be a bit racier. On the flip side of the speed advantage, the Trek is not as comfortable as the Rivendell (which is insanely comfortable) and encourages over-exertion - leaving me feeling far more exhausted after a ride. One curious thing about how I feel on the Trek, is that my hands always hurt at the beginning of a ride - but stop hurting as the ride progresses and I pick up speed. This is surprising, because when something hurts at the start of a ride, it typically only gets worse the longer I cycle - so each time I get on the bike I have to suspend disbelief and remind myself that my hands will stop hurting in a few minutes. And thankfully, they always do. I also find it challenging to hold the drop portions of the bars on the Trek (something I have already mastered on the Rivendell) without losing some control of the bike or at least weaving a bit. I am sure this will feel comfortable eventually, but I am not there yet. Just yesterday, I was finally able to use the downtube shifters for the first time - after having tearfully declared that they were "impossible" time after time on previous rides. Everything takes practice. 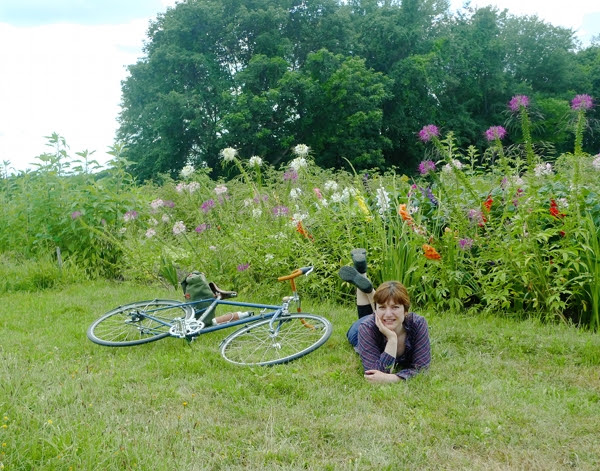 When I first got the Trek, I was not at all sure that I would be keeping it. We modified it just enough to make me comfortable, and it would be easy to resell this bike at no loss. I wanted to experience a "real" roadbike without the coddling qualities of the Rivendell, and now I have. So what next? Well, I don't know yet, but I don't really want to let it go. It has been bewildering to discover that I kind of, sort of might actually be good at road cycling, and I would like to see this discovery through. Depending on how much time I have in a day for a ride, I take either the Rivendell (for long rides), the Trek (for medium, but fast paced rides), or the fixed gear Moser (for shorter, intense rides) - and together they are helping me understand my potential.
Labels: diamond frame drop bars fenders roadcycling