The Pashley Guv'nor: A Retrogrouch's Dream 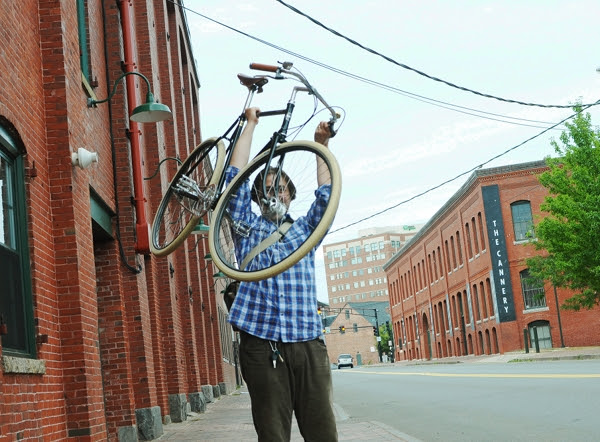 When borrowing bikes from Portland Velocipede, I had thought the Co-Habitant might like to try something entirely new, like a Gazelle or a Brompton. But he is a die-hard Pashley fan and seized the opportunity to ride the Pashley Guv'nor. The man is not overly fond of writing, so I will do my best to communicate his impressions - though the picture above pretty much says it all. 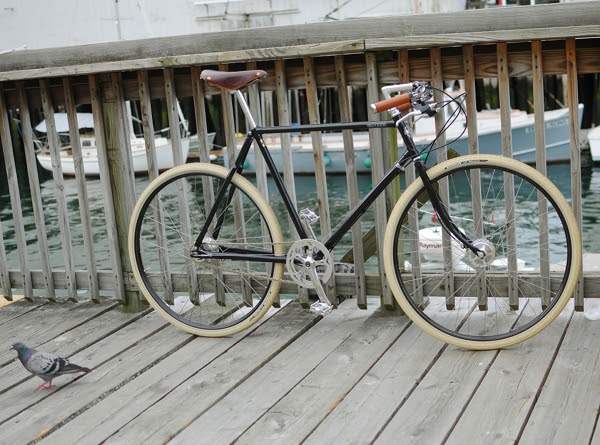 The Pashley Guv'nor is modeled on the 1930s Path Racer, and its faithfulness to this concept is remarkable. The frame is relaxed, with the same frame geometry and 28" wheel size as the Pashley Roadster. But while the Roadster is made of high-tensile steel (heavy, utilitarian), the Guv'nor is made of Reynold's 531 tubing (super light, high-end). 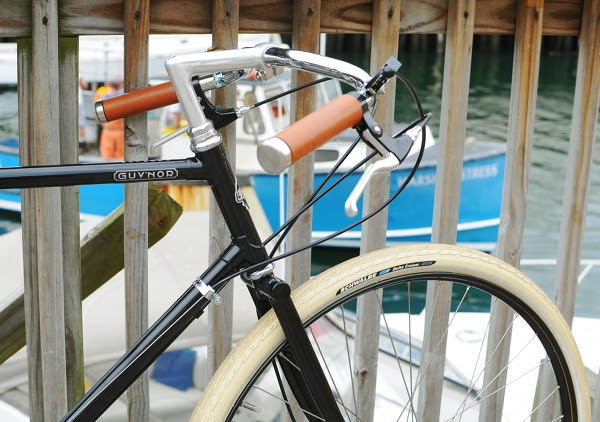 Additionally, the Guv'nor features fancier lugwork, and is equipped with sportier and more luxurious components - such as the racy upside down "North Rroad" handlebars, a Nitto stem, leather grips, and a Brooks B17 Titanium saddle. It is available as a single speed or a 3-speed, and a crazy limited edition with 4 speeds and golden lugs exists as well. 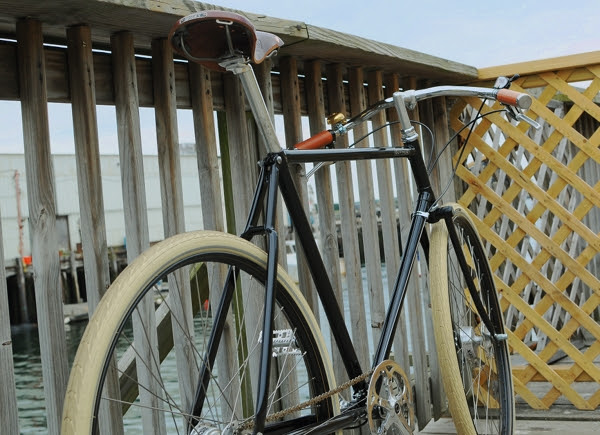 The Guv'nor is fitted with cream Schwalbe Delta Cruiser tires, and it intentionally lacks fenders. No lights or racks either. Like a traditional path racer, this bicycle has a high bottom bracket and horizontal chain stays. Because of the high bottom bracket and the slack seat tube, there is a huge amount of seat post showing, which exaggerates the aggressive appearance. Although the Co-Habitant's Roadster has the same amount of exposed seat tube, this is disguised by the huge rails and springs of the Brooks B-33 saddle that the Roadster is fitted with. The flat and unsprung B17 on the Guv'nor, on the other hand, leaves every millimeter exposed. 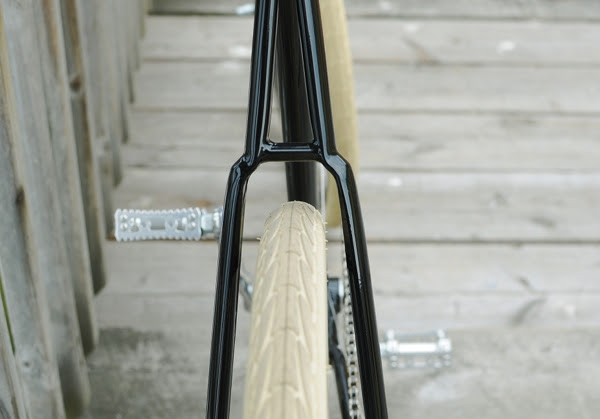 Front and rear drum brakes give the bicycle a clean appaerance. 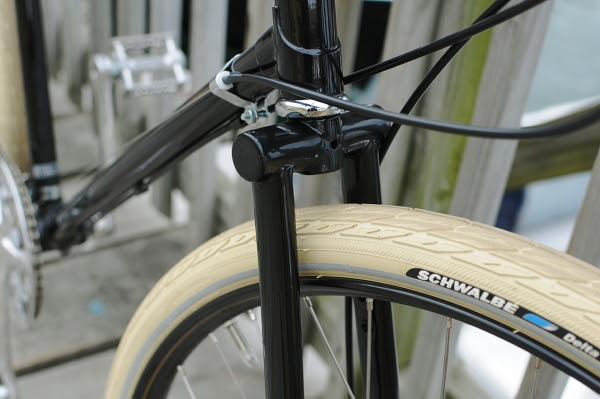 They also allow for black rims with golden pinstriping (not really captured in the pictures, but it's there). 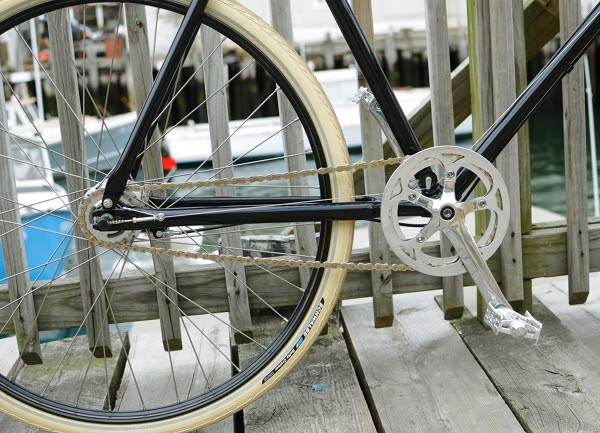 Drivetrain and track fork ends. The one aspect of the Guv'nor's components the Co-Habitamt dislikes are the cranks; he thinks they are "ugly" - though personally, I do not think they are bad looking. 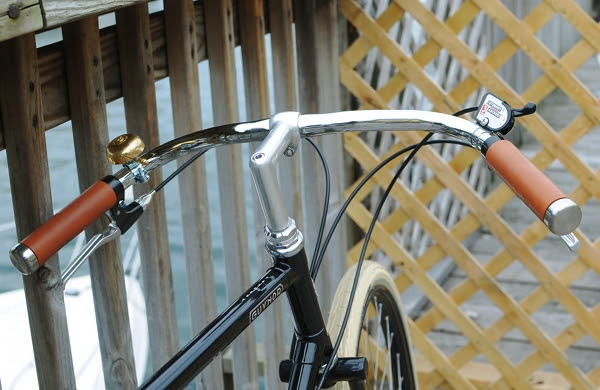 Close-up of the handlebars, with brass bell and retro-style Sturmey Archer 3-speed shifter. 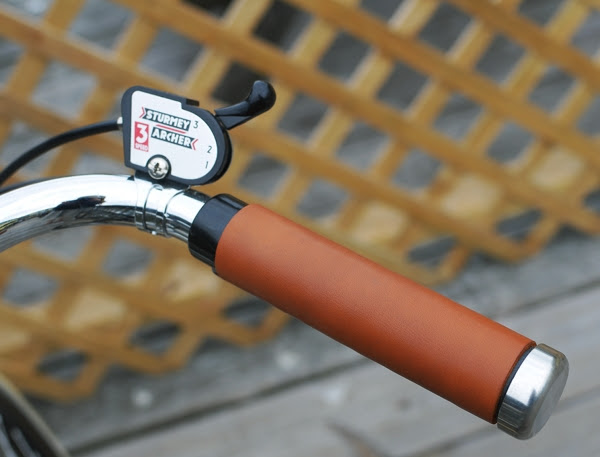 The vintage-looking shifter is a nice touch. 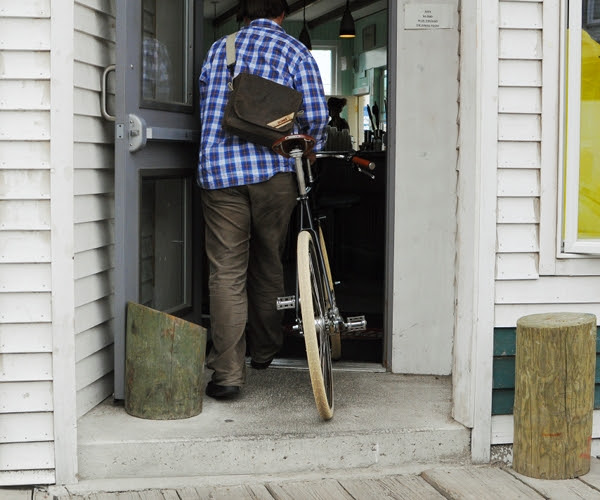 As I did on the Abici, the Co-Habitant rode around Portland, Maine on the Guv'nor - even taking it along into a dining establishment. No one seemed to mind and the bicycle received compliments. 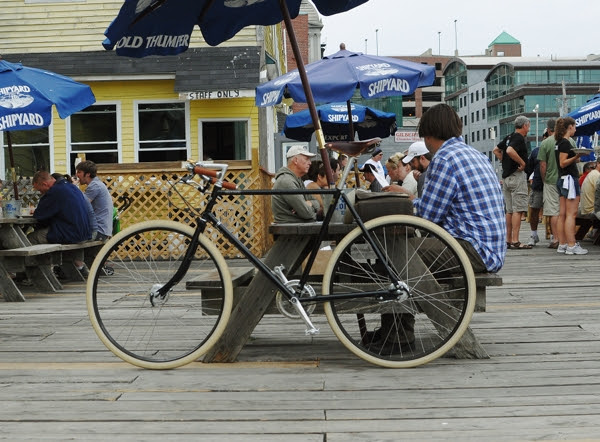 The Pashley Guv'nor, waiting for his beer and calamari. Unlike the Pashley Roadtser, it is extremely easy to maneuver and drag around due to its light weight. 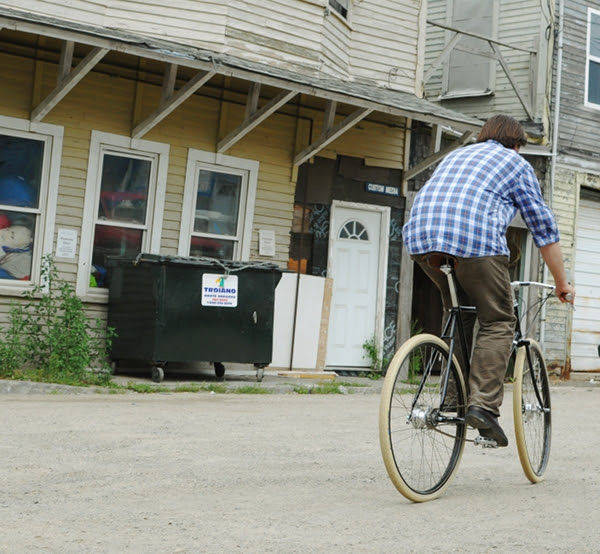 In terms of ride quality, the Guv'nor handles like a cross between a roadster and a road bike. It is very light, fast, and maneuverable - yet also stately. Some aspects of the geometry can take getting used to: Because the saddle is so far back due to the slack seat tube (plus the seat post has set-back), the handlebars are extremely far away. The Co-Habitant thinks that Pashley should have either used a shorter stem, or a seat post with no set-back; otherwise the posture feels too extreme - especially in combination with the slack seat tube and the forward position of the pedals. 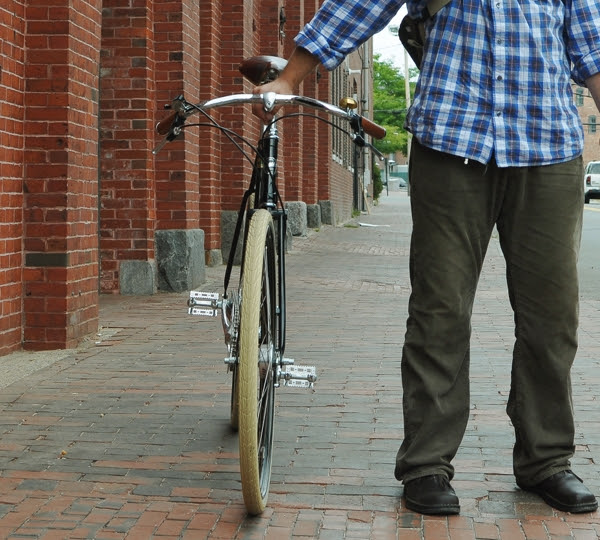 Riding the bike around town was tremendous fun for the Co-Habitant, and of course he would love to own such a bike in a world unhindered by practical considerations. But the Guv'nor woud hardly be a reasonable choice for regular commuting, given its lack of fenders and lights. And while in theory, these could be installed, doing so would ruin the authentic Path Racer look - which is the very heart of the concept behind the Guv'nor. Ultimately, the Guv'nor was not designed for practicality and makes no claims to be a daily commuter. It is a trophy-bike, meant to be taken out in fair weather and enjoyed for its unique ride quality and vintage aesthetics. More than anything, it is the concept itself that is impressive: Pashley created this bicycle true to the original and made it painfully handsome in the process.

Many thanks to Portland Velocipede for loaning out this bicycle.
Labels: bicycle reviews Co-Habitant diamond frame Pashley