I had mentioned in passing that I brought a vintage frame with me from my last stay in Austria to build up as a fixed gear road bike... Well, here is the result:

The frame is from a Francesco Moser "San Cristobal" roadbike, circa (I think) 1978. I got the frame from a friend of a friend and had a chance to try it when it was still a complete bike, so I knew it would fit me comfortably. The previous owner then stripped the frame of components and I mailed it to myself from Vienna, as this was by far the easiest option. It cost 20 Euros to send the frame from Vienna to Boston via the Austrian post. They instructed me to "wrap it so that it looks like a bike frame" rather than packing it in a bike box, and that is what I did. I wrapped the frame in bubble wrap, then in brown wrapping paper, and attached the address in several locations directly onto the wrapping. The package arrived at my door just over 2 weeks after I mailed it. 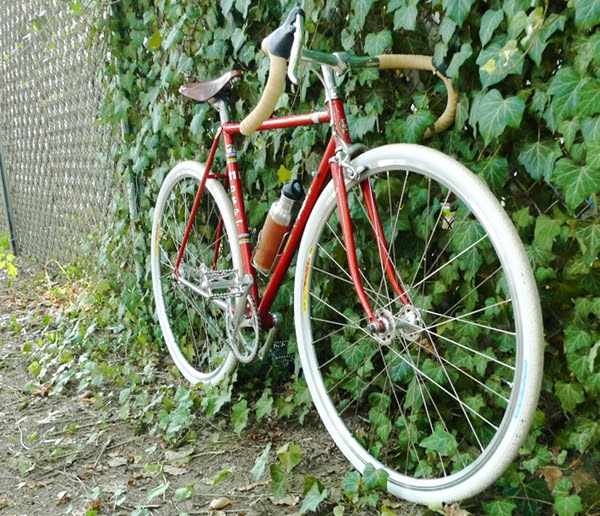 As you may have noticed, the Co-Habitant has turned into a bicycle mechanic this summer - to my appreciative delight, as I have neither the aptitude nor the time for it. He bought a bike stand, has accumulated the necessary tools for most jobs, and has been enjoying learning the ins and outs of bicycle repair. This was his first complete bike build, after he practiced with the fixed gear conversion on Marianne. As a mechanic he is meticulous, and this is reflected in the quality of the results. The bicycle is tight and smooth and noiseless and just the way I wanted it. 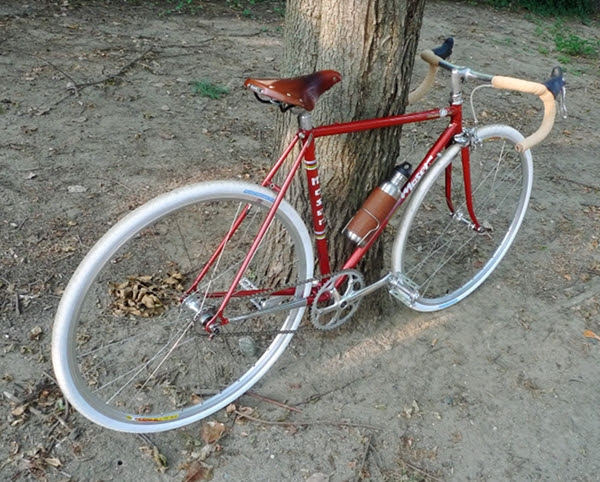 If you are interested in components, they include a Sugino RD2 crankset, a Mavic CXP2 wheelset, and white Panaracer Pasela tires (700x28C). The seat post (manufacturer unknown), stem (Nitto), handlebars (GB) and brake (Shimano, model unknown) were recycled from various used/vintage sources. The brake levers are the same Tektro short reach I have on my Rivendell, and these are pretty much the only roadbike brake levers that I am actually able to squeeze with my poor hands. I have both brake levers despite there only being a front brake, because I like to keep my hands on the hoods. The right lever activates the brake; the left lever is inactive. Though I find it silly to have a "blank" brake lever, I cannot think of a better solution. 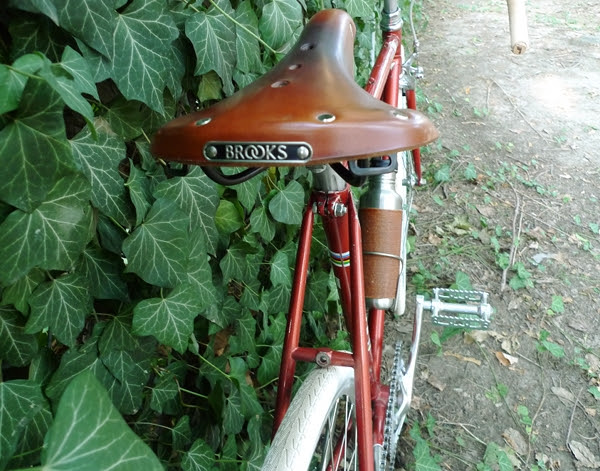 As for the lack of rear brake, the reason is two-fold. First, a rear brake in unnecessary on a fixed gear bike. And second, our tire choice made the rear clearance too tight to allow one. It looks in the picture as if the bridge is actually touching the tire, but I assure you it is not. There is enough clearance so that it is perfectly fine to ride, just won't fit a brake. 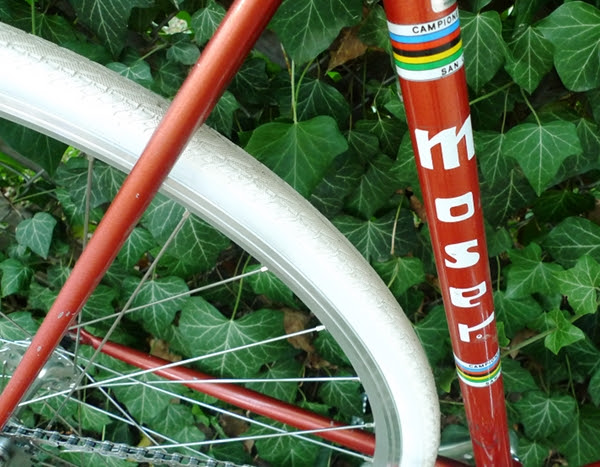 This bicycle originally came with tubular wheels and narrow tires, so fitting it with 700C wheels and the cushy white 28mm Paselas was really pushing the limits of its clearances. But we decided to go with them, because these tires are just a spectacular ride, as well as a safer choice for my pothole-ridden "training route".  The larger wheels and tires also have the positive effect of raising the bottom bracket - which is a good thing for a fixed gear bike, as pedaling while leaning on a turn can potentially result in hitting the ground with the edge of a pedal. Needless to say, there will not be room for fenders on this bike. That is fine with me in this case, as the bicycle's purpose is entirely athletic. (Also, I think the "naked" white tires look quite good with the red frame.) 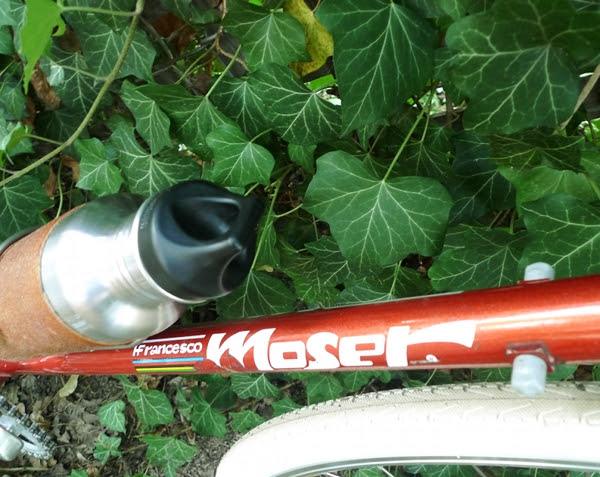 I should also mention, that while we built this bike up as a fixed gear, we did not file off any of the braze-ons or bosses. The rear derailleur hanger and the rear brake routing have been left as they were, and the downtube shifter bosses have been covered with these rubber "boss cozies" for safety and aesthetics. 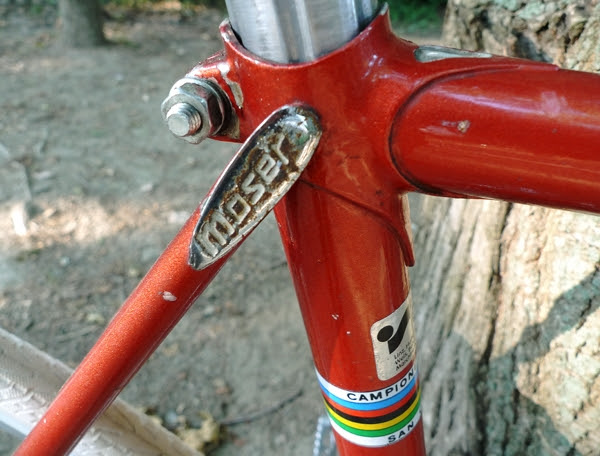 Francesco Moser frames are quite nice, and are well-regarded in Austria. I am told that this model is made of Columbus tubing, though there is no longer a decal testifying to this. 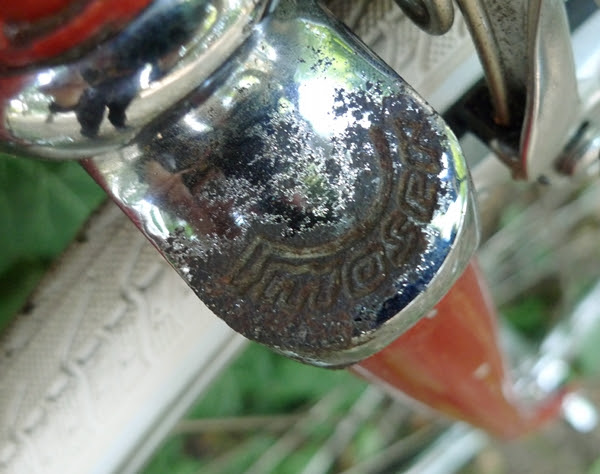 The frame is in great condition, except for some rust on these chrome parts. I plan to clean that up as soon as I determine what the safest method is. 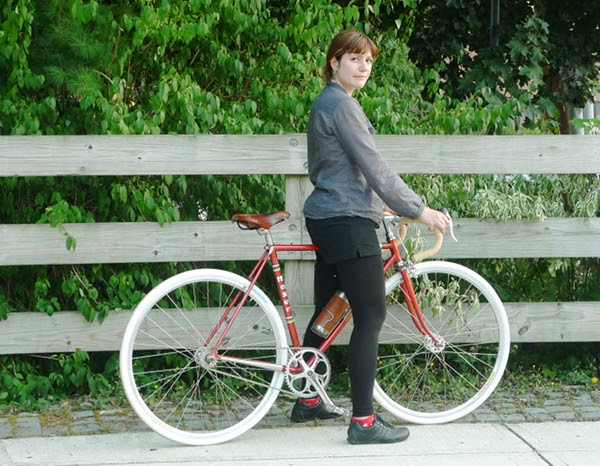 Now that I have given all the excruciating details regarding the bike, some are probably wondering why in God's name I needed a fixed gear roadbike. Well, I'll tell you. I had been planning this ever since having ridden that trackbike in Vienna and discovering that riding a fixed gear bike helps me build up my road cycling skills. It does that by addressing my biggest frustrations, which are balance and coordination. I have plenty of endurance to cycle fast for relatively long periods of time, but I suck at pretty much every other aspect of cycling (for instance, making turns and cycling closely to others at high speeds). The aspect of fixed gear cycling that most people find difficult (the constant pedaling) I am fine with, which makes it the perfect tool to help me with the other stuff.

I have gone on two long rides on Francesco so far: a 26 mile ride with only very mild hills, and another 26 mile ride with steeper hills. Though the hilly ride was challenging, I have not experienced any pain or discomfort, despite this bicycle's aggressive geometry.  Francesco seems like he will be a great cycling coach, and I look forward to getting to know him better.
Labels: diamond frame drop bars fixed gear Italian bicycles Moser roadcycling technique