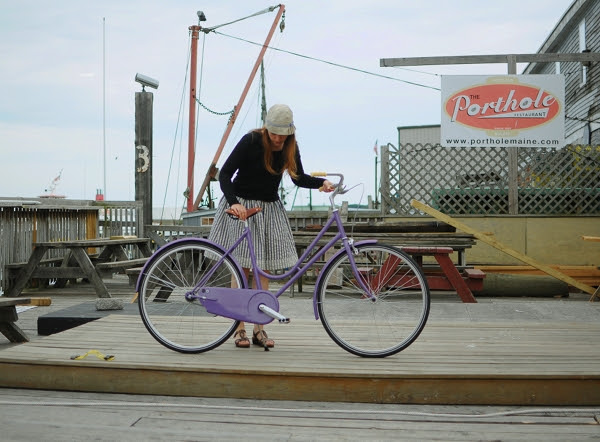 While in Portland, Maine over the weekend, I rode an Abici bicycle, courtesy of Portland Velocipede. The Co-Habitant and I cycled around town a bit to visit some of our favourite spots from when we lived in the area some time ago. Two things about the city that are of relevance to cyclists: It is hilly, and there are no bike lanes. But not to worry: The hills are short and the lack of bike lanes does not seem to matter. We cycled on the roads, and the biggest obstacle was pedestrian traffic in the waterfront area (It was a Saturday); the cars seemed to be fine with cyclists. At any rate, I felt comfortable enough to get a good impression of the bicycle. 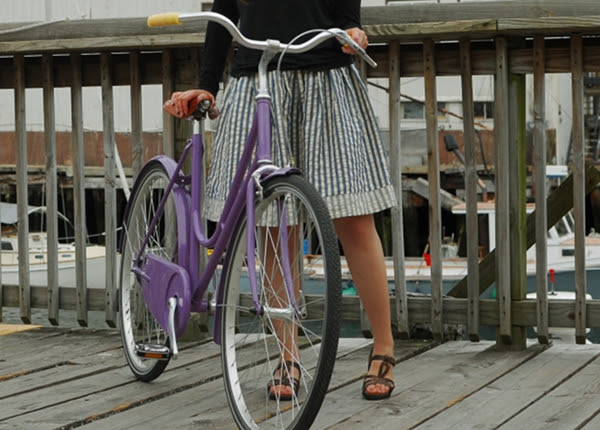 The model I rode was the Abici Granturismo Donna, single speed (also available as a 3-speed), in violet. The colour looks subdued on Abici's website, but in actuality it is highly saturated. I think pastels look good on an Italian bicycle no matter what the colour - though for my personal bike I would prefer something more neutral, like cream or slate gray. 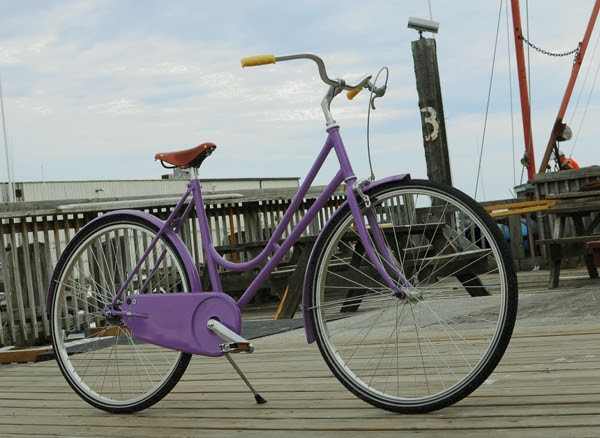 The design of the Abici Granturismo is different from classic Dutch bicycles and English roadsters, but typical of an Italian lady's bicycle. The step-through top tube is asymmetrically curved, with the bend happening toward the rear of the bike, unlike a traditional loop-frame. You can see the same design from a number of Italian manufacturers, including Orco Cicli and Bella Ciao. It is also the design of the "Mrs. Cinelli" bicycle I had admired at the Larz Anderson Bicycle Show. (As an aside, I have tried to research the history of this frame style, but have had no success - so would appreciate any information or tips.) 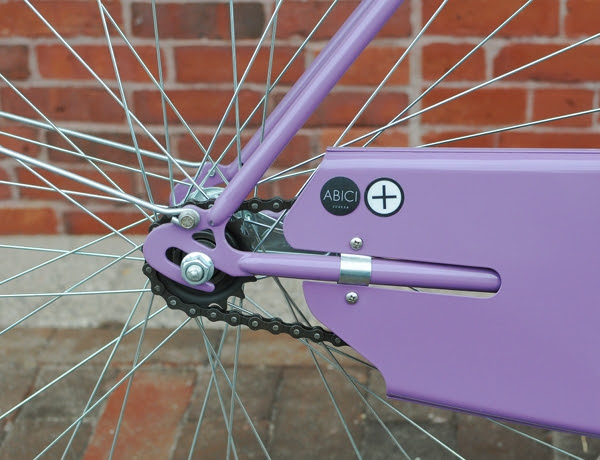 Both the single speed and the 3-speed versions of the Granturismo model come with a coaster brake and a front caliper brake. The chain is fully enclosed, except for an opening at the rear for easy wheel removal. As far as design goes, the Abici is an appealing bicycle - though a couple of things puzzle me. For example, why was it made with derailleur-style dropouts, if it is designed for internally geared hubs? This is not so much a criticism, as a genuine question. Could it be that they are planning a derailleur version in the future? Also - and this is a minor thing - I was surprised by the lack of headbadge. Is it an intentional act of modesty to place the company's insignia only on a tiny part of the chaincase? If so, it is an interesting concept (but I nonetheless love headbadges!). 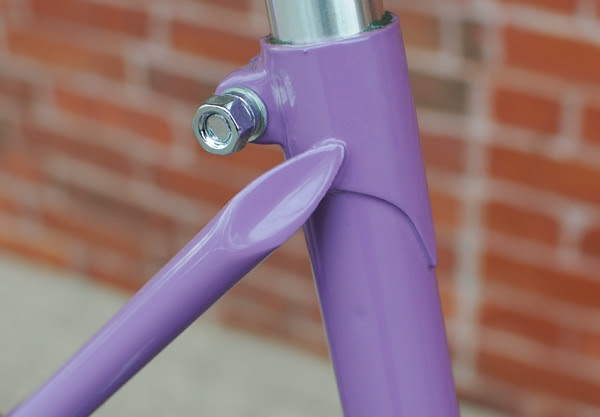 Continuing with the scrutiny of the details, here is the seat cluster. This part of the bicycle is beautiful. 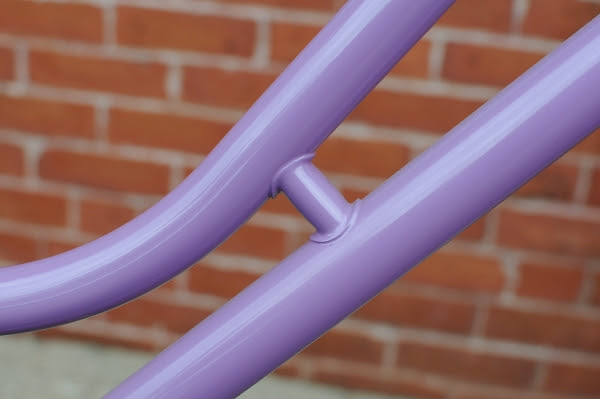 Equally well done is the lugged connector between the top tube and downtube. The Abici is gracefully lugged throughout, except... 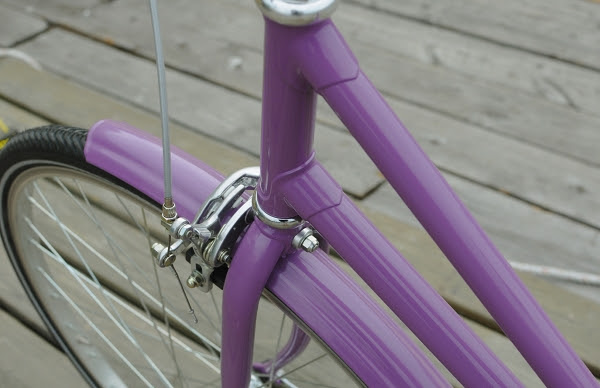 ... yes, except for the welded unicrown fork. The contrast between the wealth of lugwork on other parts of the bike and this fork makes me want to cry. Why Abici, why? I am privy to the wholesale upcharge on lug-crowned forks, and it is not that high.

I know that some of you must be tired of my complaining about unicrown forks, and others might simply not understand what the big deal is, so let me explain my views: If a manufacturer claims to make an elegant, classic, high-end lugged steel bicycle and they go through the trouble of getting the details right and ordering all those complicated lugs, it makes no sense to omit the fork. The fork is a part of the bicycle just like the tubes are, and, in my view, its design ought to match the design of the frame. If the welded unicrown fork is a cost-cutting measure, then why stop there and not make the entire bike welded to match? If you consider this view extreme or unreasonable, then fair enough - but I cannot help my tastes. 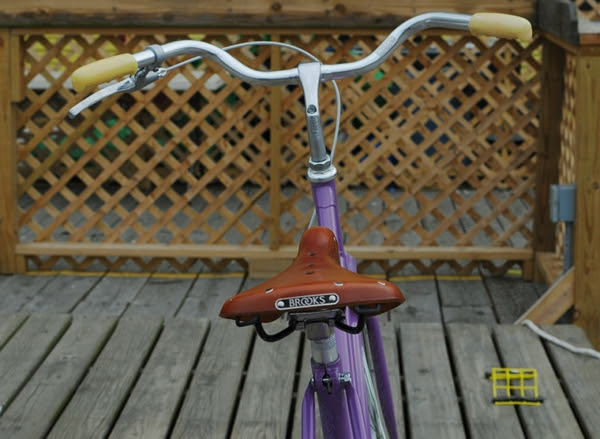 Aside from the fork-crown issue, I have no complaints about the Abici Granturismo. On the contrary, handling and riding it was a pleasant surprise, as it was very different from any other city bicycle I had ridden previously. The main thing, is the sporty handling: from the steep-ish angles, to the aggressive sitting position, it handles like a roadbike that happens to be a step-through. It is fast, responsive, and light. 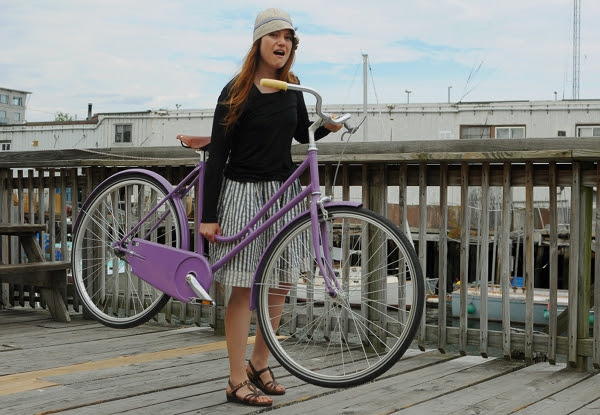 How light? Without exaggeration, it felt like half the weight of a Pashley or a Gazelle. Of course it had no rear rack, no lights, etc., etc. - but even taking that into account, the weight difference is considerable. I could drag a bike like this up and down the front stairs all day without complaining. Of course the downside to a light, sporty bicycle, is that the ride does not feel quite as cushioned as on a humongous Dutch bike or English roadster. So, as they say, choose your poison.

Because of its sporty geometry, I could mostly tackle the Portland hills on the Abici in its single speed - but the 3-speed would have been better. I should also note that it took me a while to get used to the coaster brake on this particular bike (despite being a lover of coaster brakes). Initially it felt counterintuitive, like having a coaster brake on a roadbike: In an aggressive riding position, you just do not expect to be braking in that manner. But the front brake on the Abici worked extremely well. So, just as I would on an actual roadbike, I ended up using mostly the front brake - activating the coaster brake only on occasion, and eventually getting used to its presence. 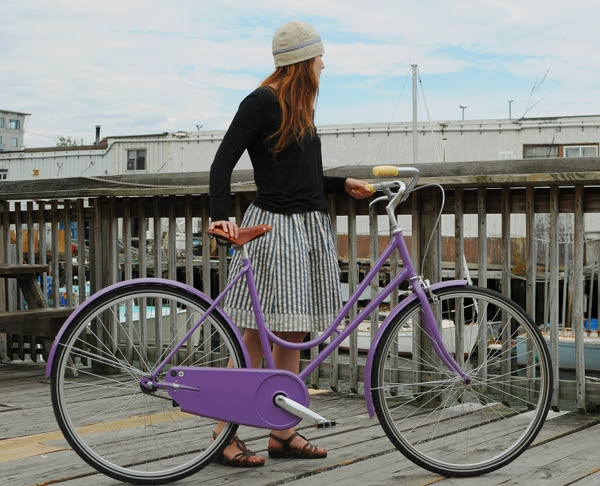 The Abici Granturismo Donna is a great choice for those looking for a sportier, lighter, more maneuverable step-through bicycle that is still more or less upright and comes with (or can be fitted with) all the trappings necessary for everyday transportation. Be aware that its handling and weight are radically different from that of classic Dutch bicycles and English roadsters, and whether this is a plus or a minus for you depends on your preferences. The price is very reasonable, and I would seriously consider buying the Abici for myself, if it were not for their choice of fork.

Many thanks to Portland Velocipede for loaning out this bicycle.
Labels: coaster brake Italian bicycles skirt test rides