Retrovelo Paula in the Countryside (with Her Vintage Friend) 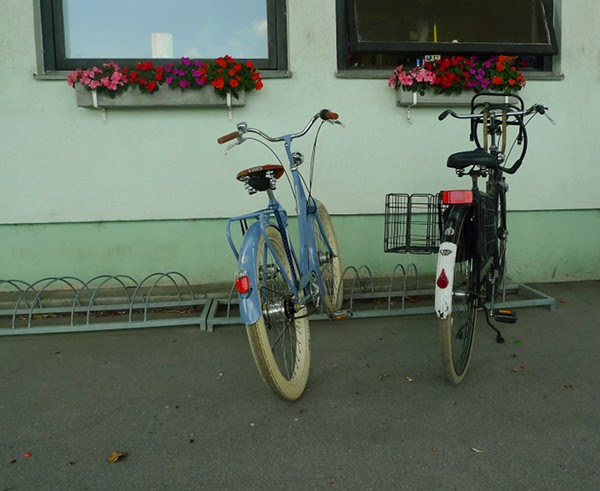 I have written about Anna's Retrovelo Paula before, but I was not able to evaluate the ride after what was only a couple of minutes on a cold November day. This time around it was summer, and Anna and I went on a nice long trip along the Danube - she on her Retrovelo Paula and me on the Steyr Waffenrad (the bike I ride while in Vienna). Our ride was 30-miles round trip, and for a stretch of it we swapped bikes. 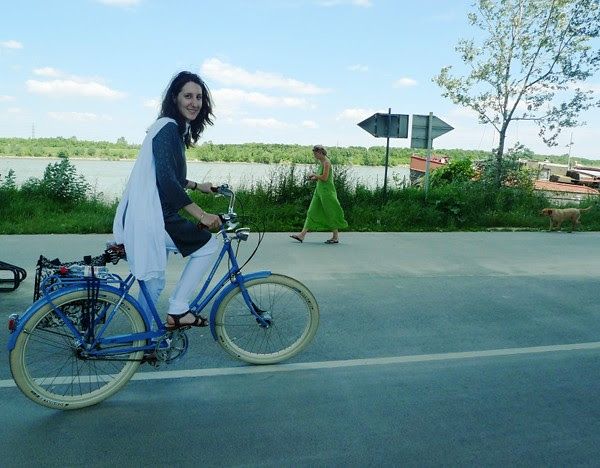 Here is Anna on her beautiful bike. 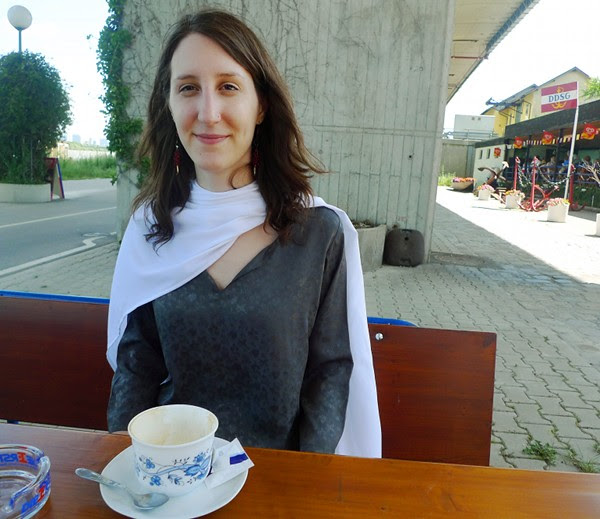 I must pause and mention here that she was wearing a stunning outfit taylor-made for her in India: slate blue kaftan, white trousers and white cape. It looked elegant and kept her cool on what turned out to be a very hot day. 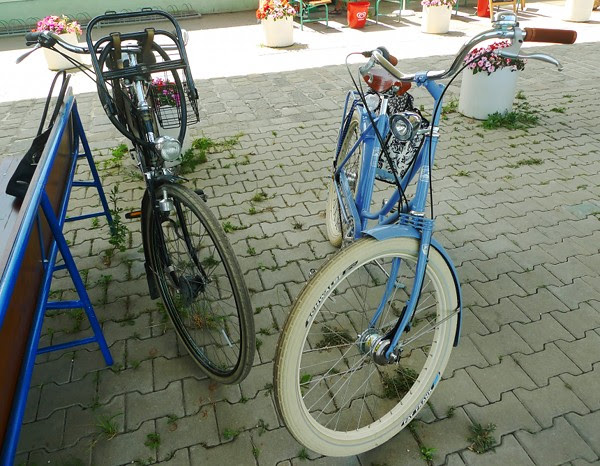 But back to the bikes: neither the Retrovelo nor the vintage bike I was riding had a problem with the magnitude of the ride, which did include occasional (but mild) hills. 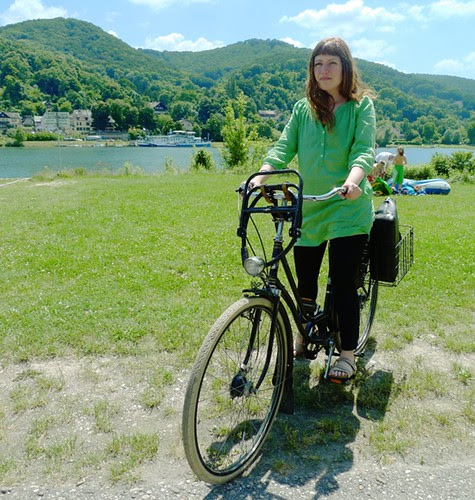 We rolled out of Vienna and passed through the beautiful countryside of Klosterneuburg, Krietzendorf, eventually stopping at a scenic spot in Greifenstein. 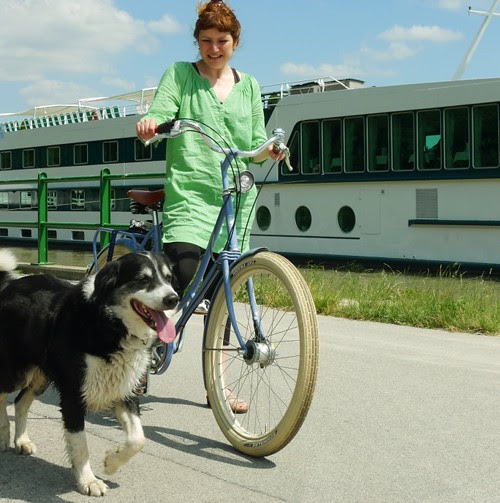 Here is me with the Retrovelo Paula during our trip. This dog decided to join us for a bit - no doubt because he liked the bike! 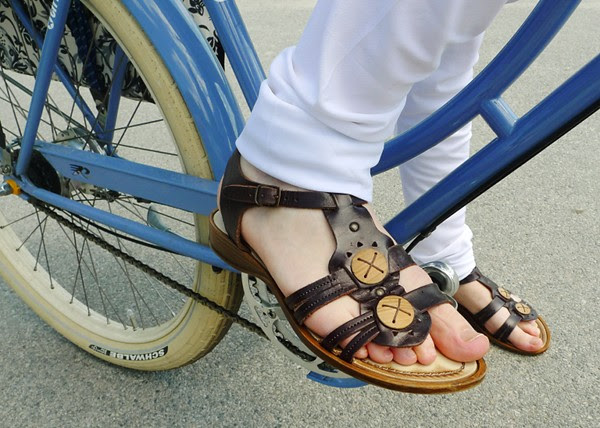 Anna's feet and sandals. My main impression of the Retrovelo Paula is that it is a comfortable ride with a feel of gliding to it. The bicycle is clearly well-made and of high quality. It rode very differently from the vintage Austrian bike I was on, but similarly to my Pashley back home (after the latest round of modifications I made to the Pashley). Prior to its latest modifications, I would say my Pashley was more sluggish than the Retrovelo Paula, but post-modifications they are about the same. One interesting point, is that I did not feel a huge difference in "cushiness" between the Delta Cruiser tires that I had been riding on my vintage bike, and the Fat Frank tires on the Retrovelo; to my surprise the ride quality was similar. 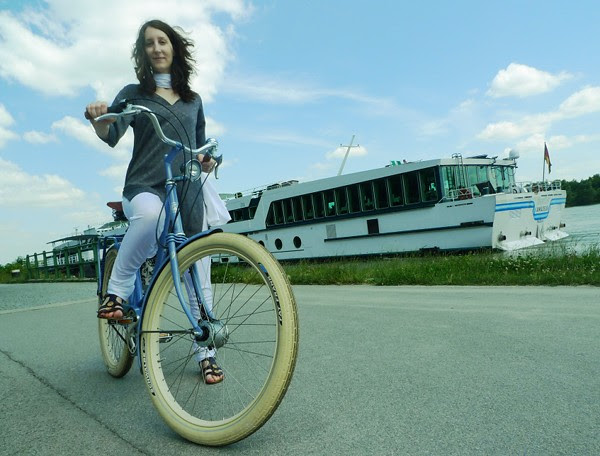 Overall I liked the Retrovelo Paula, and found its ride quality to be in the same general category as that of Pashley and Velorbis.  I think that between the three of these, preferences really depend on individual tastes more than anything else. I know of one former Pashley owner who tried the Retrovelo, liked it better, and has now gotten one (and is selling her Pashley). However, I do not feel the same, and wonder how much of the difference she felt is component and setup-related. The Retrovelo is a very pared-down bike in comparison to the Pashley, and I think the choices of tires and gearing further contribute to the sportier feel of the ride if we compare their "out of the box" set-ups - but all of that can be changed, and I feel that the basic ride quality is similar. 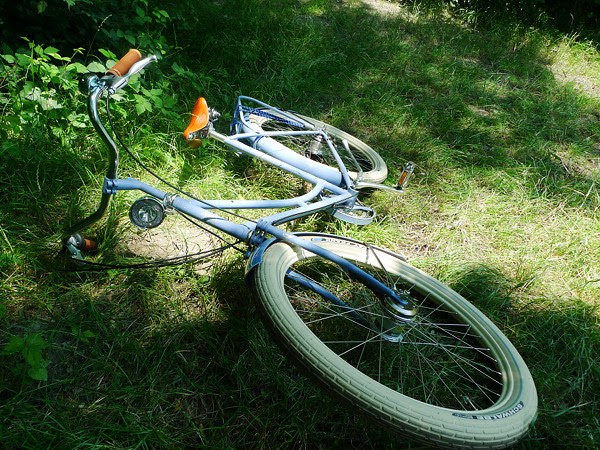 In terms of manufacturing quality, I would rate Retrovelo as being on par with Pashley and better than Velorbis. Aesthetically, I think the Retrovelo has hands-down the best fork-crown design and lugwork of the three, but it has a few practical drawbacks - such as a lack of chaincase and dressguard. As for weight, the Retrovelo Anna was riding felt to me as if it weighed exactly the same as my Pashley at home; it is not a light bicycle by any means. 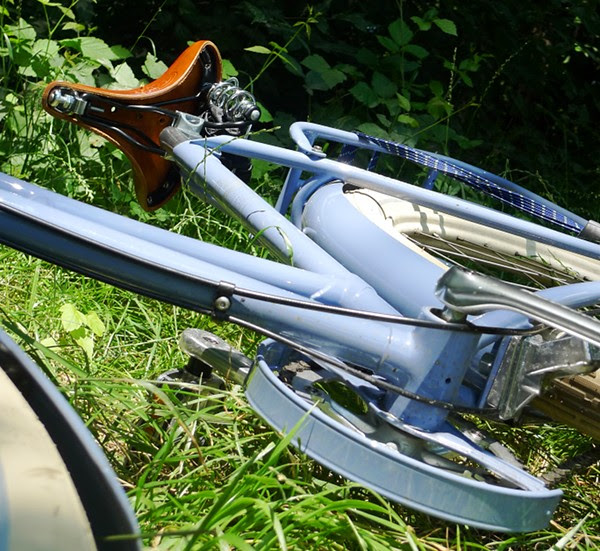 Other random notes... The Retrovelo has handlebars that to me feel unusually wide, a bit like cruiser bars. Some may like this, others may not. The braking system is hand-activated hub brakes. If you are a coaster brake fan keep that in mind, but I know that some dislike coaster brakes and will see this as great news. The bicycle is equipped with dynamo lighting, front and rear. 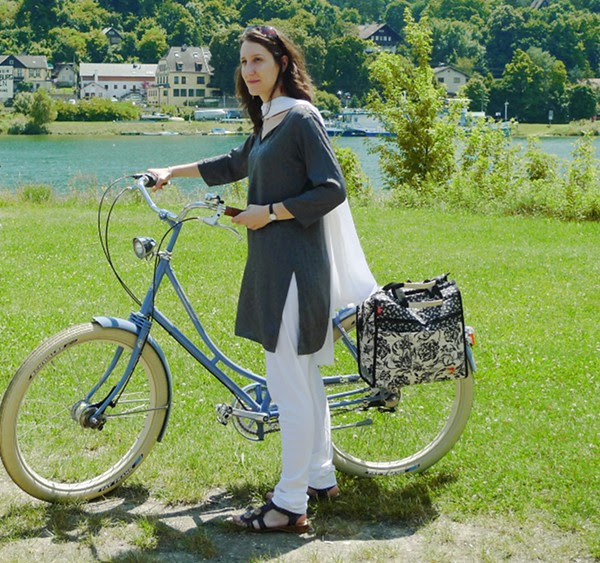 The bottom line is: the Retrovelo is an excellent modern bicycle built in the classic tradition. It is fairly fast and maneuverable, comfortable, gorgeous, and its owners love it. If it is within your budget, I doubt that you will regret choosing this bike. 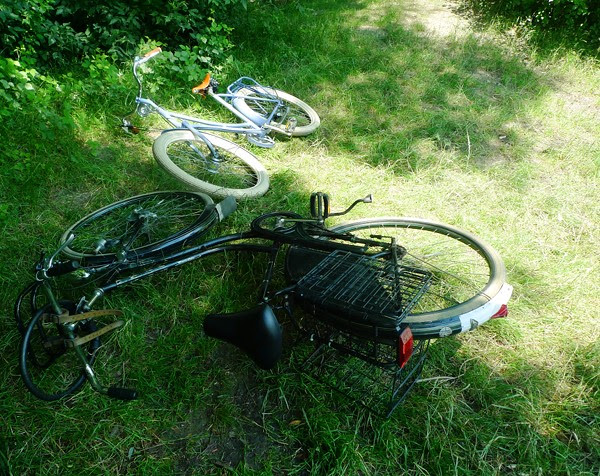 But... I have yet to find a modern bike with a ride quality I like better than my vintage Raleigh DL-1 or the vintage Steyr Waffenrad I ride in Austria. I honestly wish that wasn't so, as I'd feel more comfortable riding a reliable modern bicycle than a vintage one. But it is as if the modern designs did something to the geometry of the bikes that has made them less efficient than their vintage equivalents. Maybe someday I will figure it out.
Labels: bicycle reviews bike friends clothing Jacqueline Vienna