Excess in the Bicycle Industry: Explanations and Implications 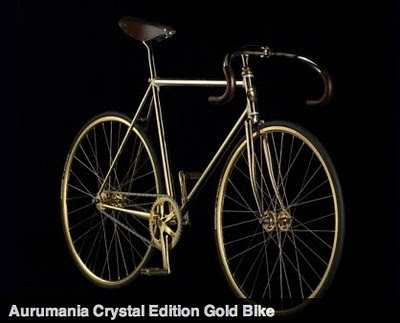 [Aurumania crystal and gold track bike, image via forbes.com]
A couple of weeks ago, Forbes published an article on "The World's Most Expensive Bikes".  Readers have been sending me links to this article asking what I think, until finally I gave in and read it. 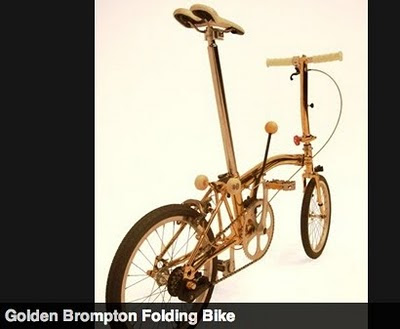 [Golden Brompton, image via forbes.com]
Glancing over the pictures, I noticed a strong trend for gold plating, crystals and diamonds - the usual when it comes to "luxury bikes". It made me wonder how much of these bicycles' price was due to ride quality (can they even be ridden?) and how much was due to the decorative elements. 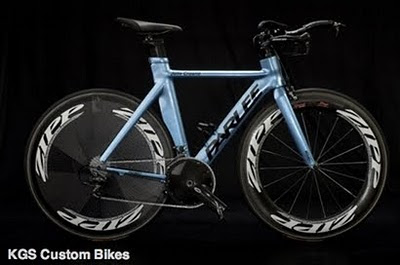 [KGS custom Parlee bicycle, image via forbes.com]
I was also surprised to see that I actually know someone whose bicycle is on the Forbes list (not my cup of tea, this bike, but I understand that some people like to race on such things).  Kevin Saunders of KGS Bikes is an acquaintance (now also a sponsor, but initially an acquaintance) and the proprietor of a custom bicycle shop in San Antonio, Texas specialising in roadbikes that promise the "perfect fit." While admittedly high end, I did not think that most KGS bikes fetched the kinds of prices featured in Forbes. So I asked Kevin about it. His answers were pretty straightforward, and I include them here in response to this discussion on Chic Cyclist (see the comments section):

Velouria: Kevin, how do you justify your $32,000 bicycle that was featured on the Forbes list?

Kevin Saunders: The bicycles in that price range that we have created were commissioned as one-offs. (They were also done prior to the Recession that started in 2008.) A price of around $18.000-20,000 is where we find the line between premium (where more expensive components actually perform better) and luxury (where more expensive components may have a special finish or paint job but do not actually perform better).

KS: Yes. Some fringe exotic components and one of a kind paint jobs (that includes not only the frame but all the components as well) can mean the difference between a $22,000 and a $32,000 bike. Our price for this is based on actual cost plus a reasonable markup.

So, if I understand this correctly, even if you try to build a top of the line bicycle for competitive road cycling with full custom geometry and the highest performance available, the price will top out at $22,000. Anything beyond that will be mainly decorative. Keeping this in mind, consider that some of the bicycles on the Forbes list are priced at over $100,000. 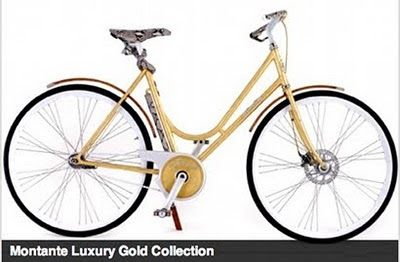 [Montante gold-plated bike, image via forbes.com]
So what are the implications of such bicycles existing?  The "designer bicycle" not only goes beyond the typical prices of custom builders, but specifically presents itself as a luxury good - incorporating costly decorative materials and accessories from haute couture houses. The "Fendi Abici Bike" I wrote about last year is one such example. There have also been similar products from Hermes and Chanel. Based on the feedback I have read about such bikes so far, cyclists in the blogging universe tend to be critical of excess in the bicycle industry. And this applies to accessories as much as to the bicycles themselves: When ecovelo wrote about a Brompton leather briefcase that retails for $600, some readers questioned that such an expensive bicycle accessory was allowed to exist. 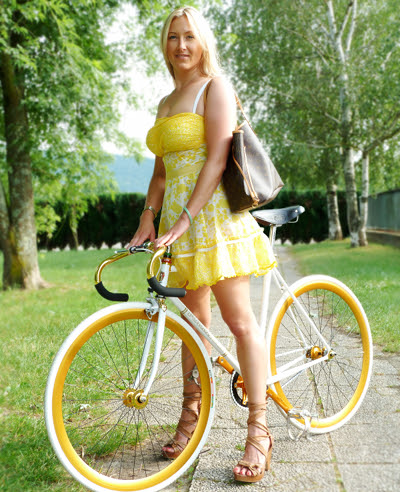 [Formigli track bike, image via KGS Bikes]
My view however, is that the trend for "luxury bicycles" is great. Bring on the gold-plated framesets, the diamond-encrusted derailleurs, and the haute couture panniers! Even though I would not buy any of it, I am glad it is there. The trend for cycling-related luxury goods is a positive one, because it successfully combats that stereotype we all know: The stereotype of cycling being something people do because they either cannot afford a car, or are part of some weird fringe subculture. Rather than making people feel guilty about materialism - which is after all, a basic trait of human nature - this trend takes advantage of materialism to make bicycles appealing for people who otherwise would not have been drawn to them. Think about that the next time you curse that luxury car cutting into the bicycle lane. Wouldn't you rather they were riding a luxury bicycle?
Labels: bicycle industry fashion industry social commentary