Don't Drink the Koolaid, but Drink the Lemonade? Testriding a Very Yellow Brompton! 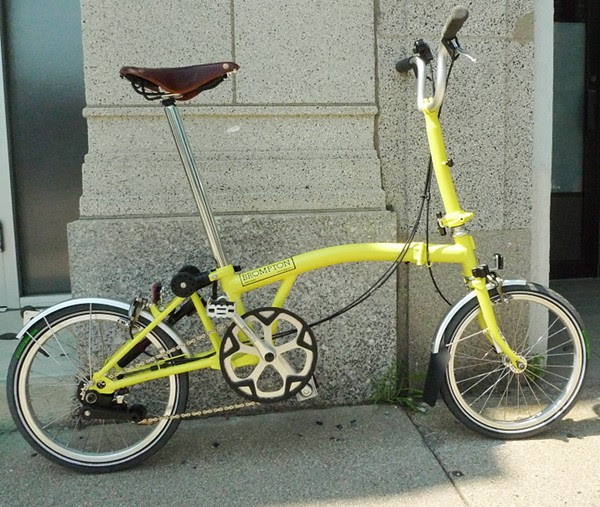 We stopped by Harris Cyclery today to pick up some components and I swear I had absolutely no intention to test-ride a Brompton. I mean, the Bromptons have been occupying a large corner of the shop since the first time we visited Harris - and I have always resisted them. But today? Well, today was a very hot day. And this lemon-yellow Brompton just looked so darn refreshing. So I will blame it on heatstroke. 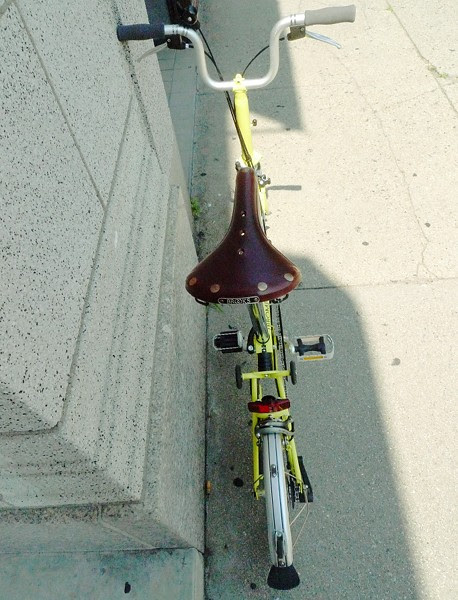 Here is an "aerial" view. This is the 2-speed model with upright handlebars and Brooks saddle. The bikes come in many versions, and options include dynamo lighting, titanium parts, mountain or trekking handlebars, and about a dozen colour choices. 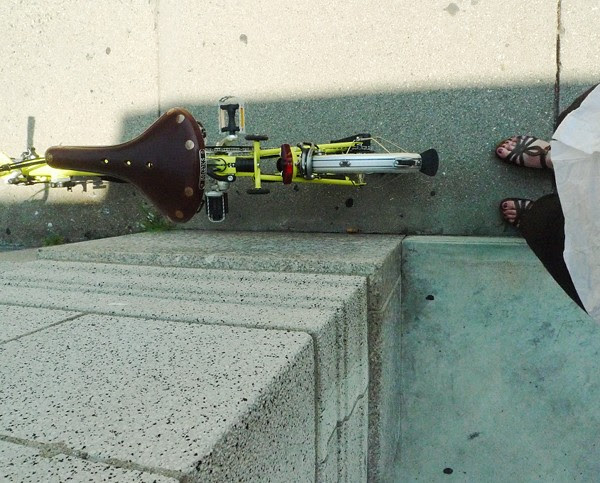 To be honest, I was initially apprehensive about trying this bike - having heard from some women that it feels "twitchy" to ride and difficult to control. But his charming demeanor won me over, and I gave it a try - first adjusting the saddle to a comfortable height, which was fairly easy with the quick release lever. 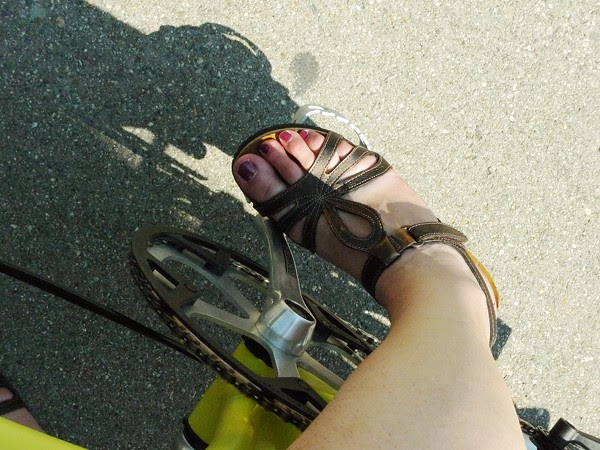 There was no one around to take a picture of my test ride, so you will have to take my word for it. To me, the bike did not really feel difficult to control in the course of the short ride. The braking power was excellent, the steering responsive but not twitchy, the pedals wide and grippy. The handlebars just the right height and I was in a position that was pretty much upright. And of course, the Brompton was easy to mount and dismount. 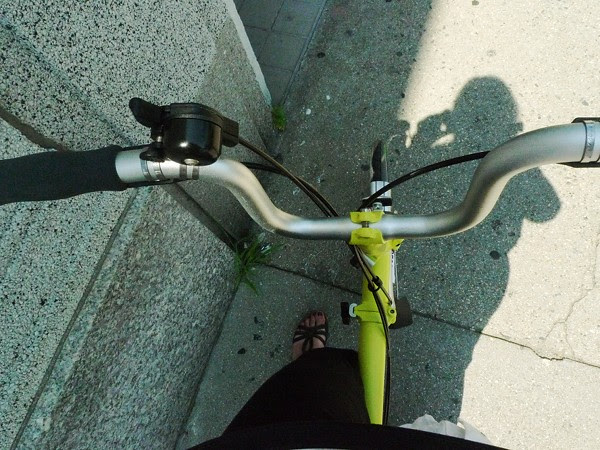 My one and only problem was with the angles of the handlebar grips. They put my hands into the "mountain bike bar" position, with my fists straight in front of me - a no-no for the damaged nerves in my hands. I hear that it is possible to attach extensions to the grips that would place my hands into the "North-roads" position, and so that is what I would do if I were to actually get a Brompton. Have any of the Brompton owners out there done this? 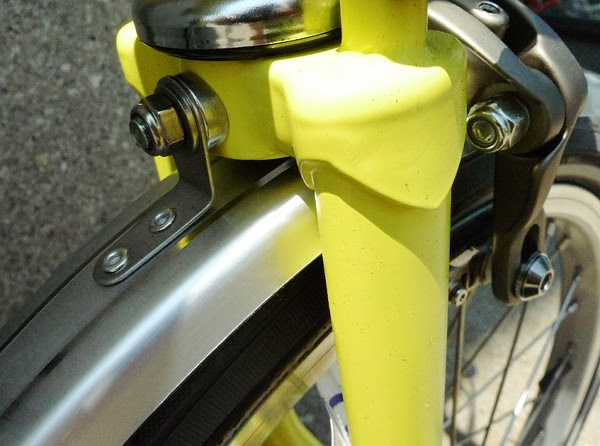 As for the looks and construction of the bikes, I think the cuteness and technical ingenuity of the Brompton is fairly well known at this point, so I will not bother repeating it all. But what you don't always notice in the industry reviews are the charming details - like this handsome lugged flat-top fork crown. 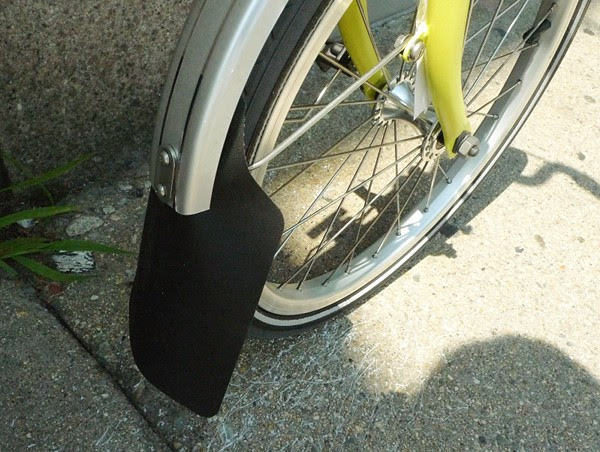 ...and this miniature mud flap! 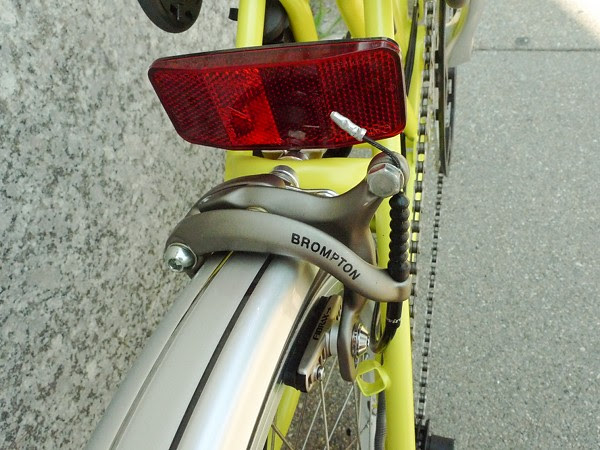 Another interesting detail about the Bromptons, is that they use a lot of proprietary components - the Brompton name is stamped on the brakes, pedals, and other parts. 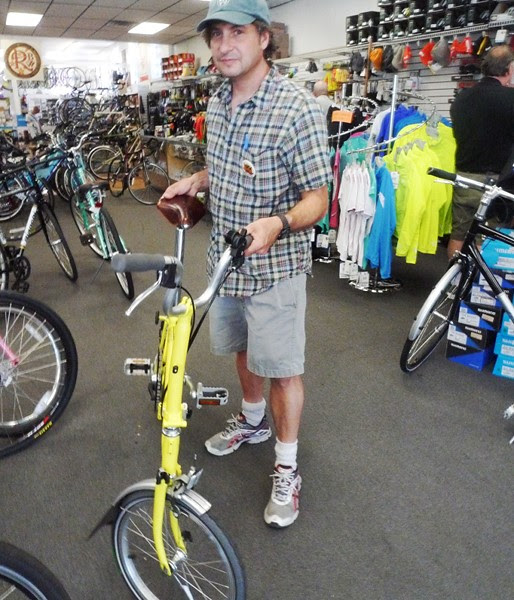 But the most striking thing of all, is the attitude of the Harris Cyclery staff towards Bromptons. They are crazy about them, and it seems that most of them have one. Jon Harris (pictured above) and his wife both ride them. It is clear that the shop stands behind this manufacturer 100%. 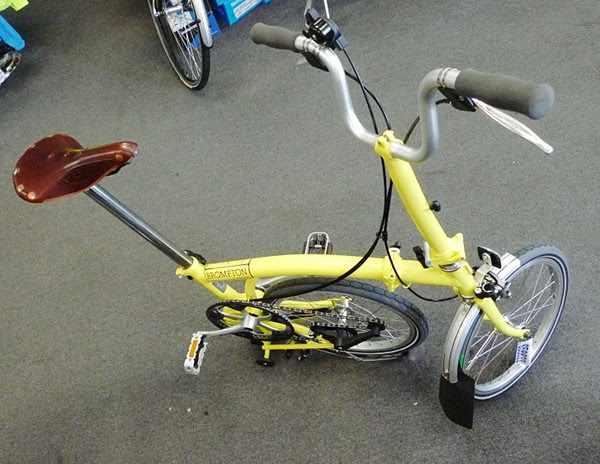 I realise that I keep neglecting the folding aspects of the bike and all the technical specs - but come on, we all know that it folds, and it is supposed to be the best folding bike out there. What I wanted to focus on more, was my personal impression - especially as I have noticed that women seem to be intimidated by these bikes and tend to choose Dahon and Bike Friday folding bikes instead. Personally, I have tried both Dahon, Bike Friday, and a few other folders, and none of them have ever "spoken" to me. Despite the fact that I travel a lot and could really use a folding bike, I've just never been attracted to folders and have never wanted one. Having finally tried the Brompton, I am having second thoughts.
Labels: Brompton local bike shops test rides