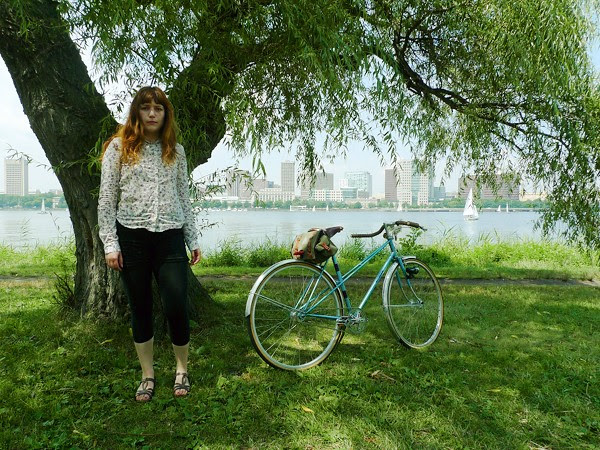 I have ridden Marianne for about 50 miles now as a fixed gear, so I figure that I can offer my impressions without feeling that I am speaking too soon. I have taken her both on city rides in traffic and on trails (the Charles River Trail and the Minuteman Bikeway), both with the Co-Habitant and alone. And I think the fixed gear conversion was the best thing that could have happened to this bicycle. 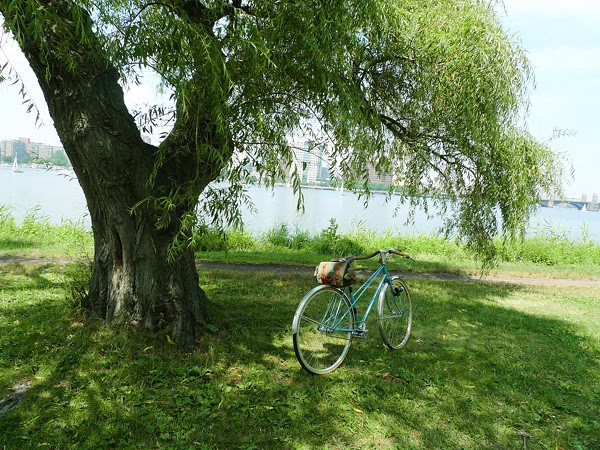 Popular culture has created the unfortunate association between fixed gear and danger, brightly coloured track bikes, and "hipsters". But that is ridiculous. The only distinguishing feature of a fixed gear bike is that it does not coast.  You can turn your loop-frame or your beach cruiser into a fixed gear if you like, set the gearing low, and enjoy pedaling leisurely around town on it. It will be just like a single speed, only you can't coast. That's all. 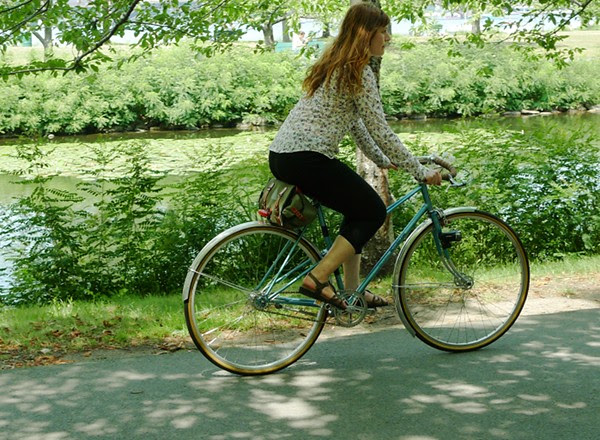 I know that most people enjoy coasting, but I have never been crazy about it. On my regular bicycles I try to always be in a gear that will allow me to pedal. Coasting - especially at high speeds - makes me feel as if the bicycle is a wild horse galloping out of control and dragging me along, with me barely managing to hold on to the reins. This is especially frightening on winding downhills - so I try to switch into a high enough gear that will allow me to pedal, and then I feel that I have better steering control. I have no idea whether this is based on real physical principles, or whether it is all in my head. But the result is that I welcome the "no coasting" aspect of fixed gear bicycles, rather than think of it as a drawback. 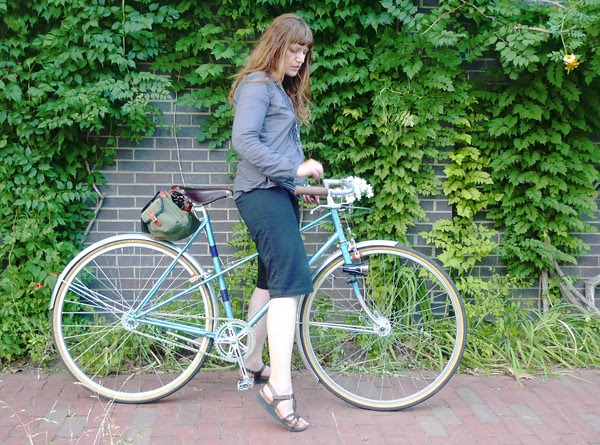 For the same reason, in many ways I find fixed gear bicycles easier to ride, not more difficult. What else is easier about them? Well, remaining stable at very slow speeds - which is a useful skill in the city. You can only coast for so long before your bicycle stops, but if you push on the pedals again, your speed will increase too much. On a fixed gear, you can pedal in slow motion, and the bicycle will remain perfectly stable while going at the exact speed you want, no matter how slow. This is especially useful when you are trying to go around pedestrians, or inch your way forward to the red light at busy intersections. If you have a poor sense of balance and coordination like I do, you may find fixed gear to be helpful in situations that would otherwise leave you flustered. As I have mentioned earlier, Marianne was a particularly good choice for a fixed gear bike, because her over-responsiveness is now an asset. As before, she turns super-quickly and easily - but now, she does it only when I want her to and the responsiveness no longer feels like "twitchiness" or "squirreliness". It feels like I now have an extremely maneuverable bike, of which I am in full control - as opposed to a bike that was more maneuverable than I could handle.

The thing that took the most getting used to, was trusting the brakes enough to speed up. I kept having to remind myself, that this is not the track bike I rode in Austria; this bike has brakes and I can come to a complete stop any time, just like on a  regular bike! After the first couple of rides though, this finally sunk in and I've stopped worrying about braking. 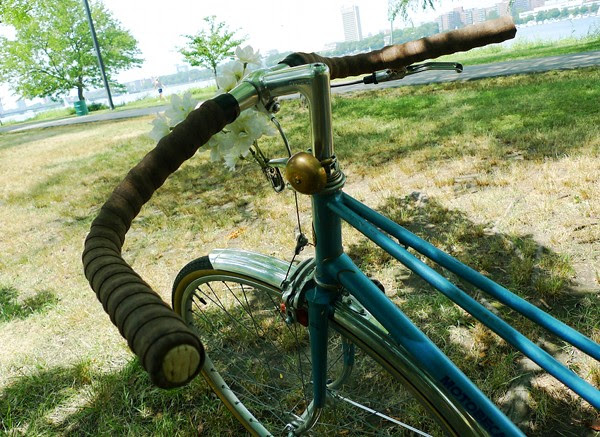 After a couple of days, we re-did the bars by wrapping the entire surface in cork tape, to allow multiple hand positions. We also removed the rear brake (it really was unnecessary) and placed the front brake lever on the right handlebar for easier access. The bell is now mounted on the stem. 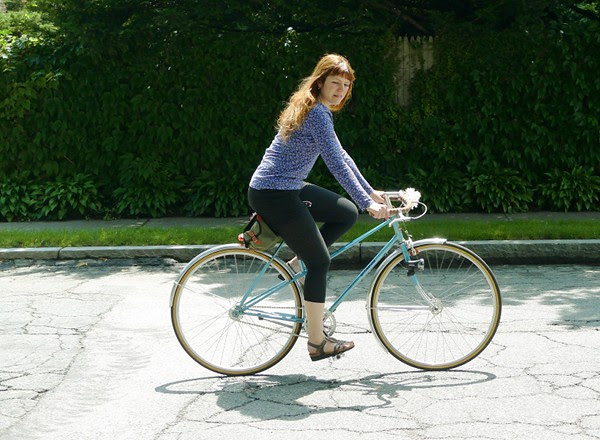 My gearing on this bicycle is 42-tooth in the front and 19-tooth in the rear (with 170mm cranks and 27" wheels).  That is a pretty non-aggressive gearing that is good for everyday cycling in hilly areas. I may get a smaller rear cog eventually (which will allow me to go faster, but will make things more difficult on hills), but I don't feel the need for that yet.

There has been some discussion about foot retention and whether I plan to get clips for the pedals. On a fixed gear bike, there is the danger of the feet slipping off the pedals, and the pedals then smacking you in the ankles. This can happen when going over bumps at high speeds, or when flying downhill. I do recognise the risk, but let me put it this way: Given that I have brakes and I don't go very fast on this bike, I think there is more chance of my falling as a result of using clips, than there is of my getting smacked with pedals. I may try Powergrips at some point, but I've seen them in a local bikeshop and even they look scary. I did not do well with half-clips. Are Powergrips easier? 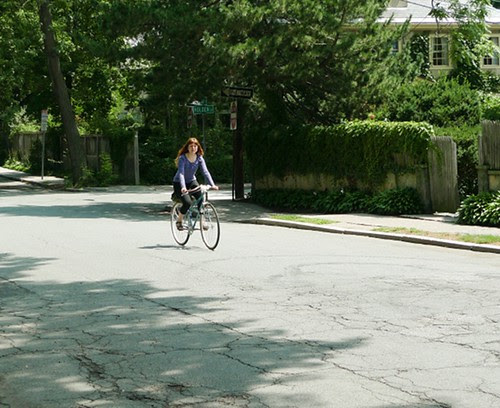 I am sure the novelty of the new Marianne will eventually wear off, but for now I can't seem to stop riding her. After a seat post adjustment (more on this later), the bicycle now feels fairly comfortable on rides under 20 miles. Taking it on a very long ride last night was overkill though, and various parts of my body are now hurting. I think I will stick with the Sam Hillborne for those, and leave Marianne for the city.
Labels: fixed gear Marianne mixte Motobecane technique vintage