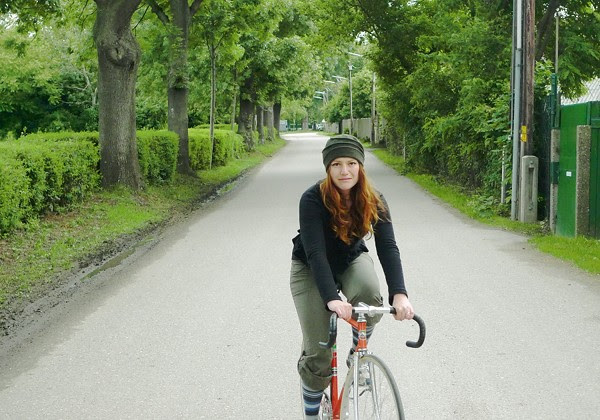 I have mentioned my wistfulness for the velodrome and my attraction to beautiful track bikes before, and, let's face it - we all thought it was pretty funny and ludicrous. But the joke has now become an unexpected reality! 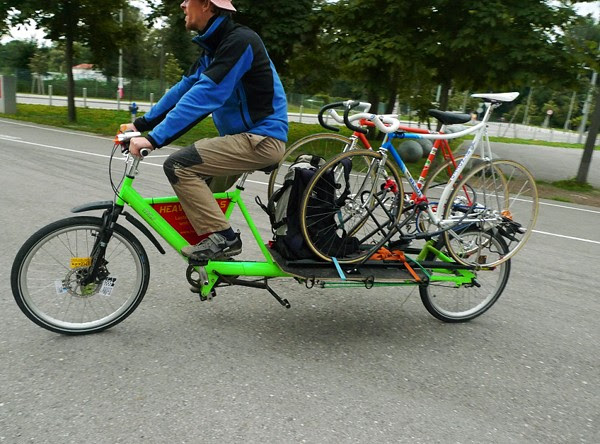 My friend Wolfgang in Vienna suggested that I try a vintage trackbike he happens to own in my size. He transported it to the Velodrome on his cargo bike, and the idea was for me to try riding it on the adjacent paved lot. The Velodrome here is closed for the summer and the abandoned lot makes for a safe practice area. We figured that even if I managed to ride the bike for a couple of yards, it would sort of count as having been on the Velodrome grounds (right?). 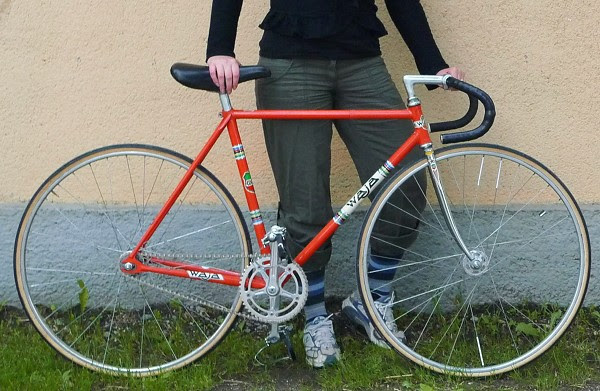 This bicycle is pretty special and once belonged to professional Austrian racer Kurt Schneider, but that is a topic for its own post. The size and fit were just right for me, really perfect. Having ridden my Sam Hillborne for a month back home, I was already used to the diamond frame and drop bars. But of course there were the small details of the fixed gear and the lack of brakes. 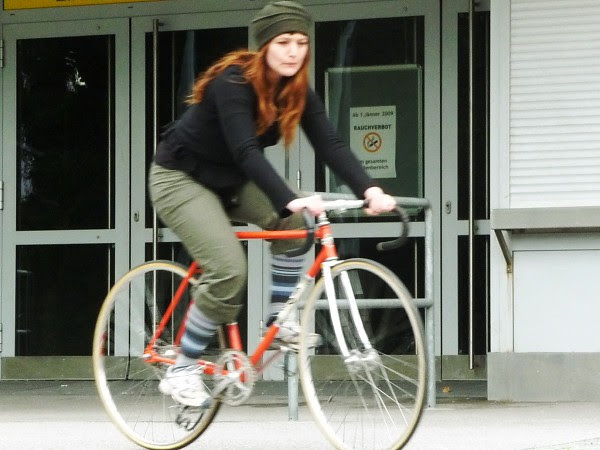 Well, apparently I survived. And what I thought would be, at best, a careful circling around the Velodrome lot, turned into an ecstatic 7-mile ride on paths and back roads on the outskirts of Vienna. Here are my impressions, from the point of view of someone who has never ridden such a bicycle before:

. The bike felt completely "normal" to ride. I expected to have trouble getting used to the inability to coast, but it did not need getting used to. It was not in any way difficult or strange, just felt natural. 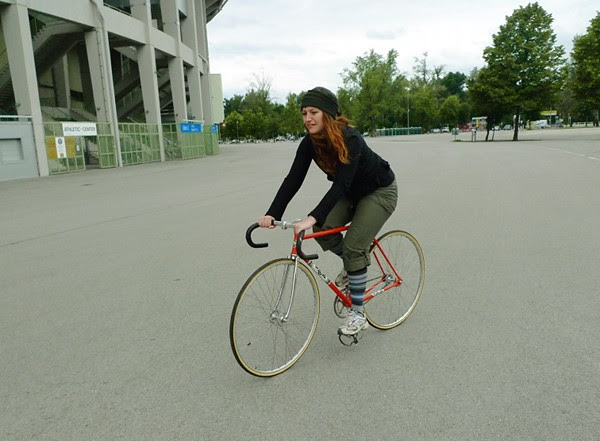 . In general, I feel that the idea of "not being able to coast" is misleading, in that it suggests that the fixed gear cyclist is hard at work the entire time, always pedaling. That is not so, because the time you'd spend coasting on a regular bike, you still spend relaxing your legs on a fixed gear. Effort-wise it is no more strenuous than coasting, only the pedals are rotating your legs for you. Just relax and let it happen.

. I do not yet understand the mechanics of this, but the fixed gear did make me feel far more in control than did any other bike I have ridden. I was able to go through tighter spaces and trickier corners without panicking. To be honest, I have always been somewhat apprehensive of coasting, because it makes me feel as if the bike can be reeling out of control at any moment. By contrast, the fixed gear feels safe and predictable. 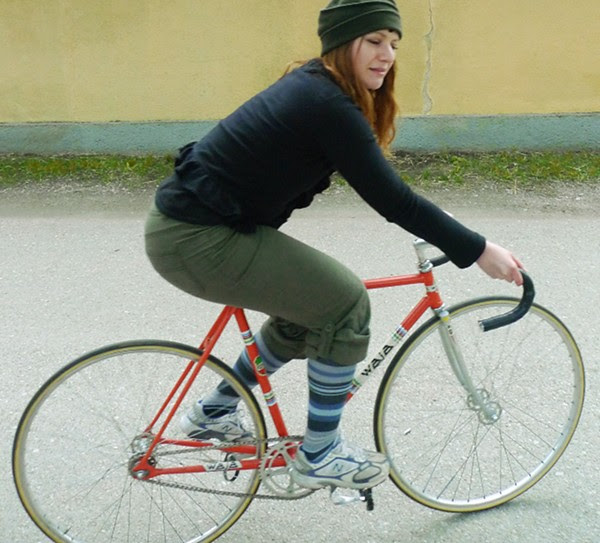 . While I do not advocate riding a brakeless trackbike on the street, I found that the stopping power was not much worse than when riding a vintage roadster with rod brakes. You just need to be aware of your speed, your surroundings, and plan your stops accordingly. I went slowly, and did not have trouble stopping when I needed to.

. The stopping process is similar to a coaster brake: just pull backwards with your legs. The bike will keep going for a few revolutions, slowing down more and more with each until it comes to a stop. 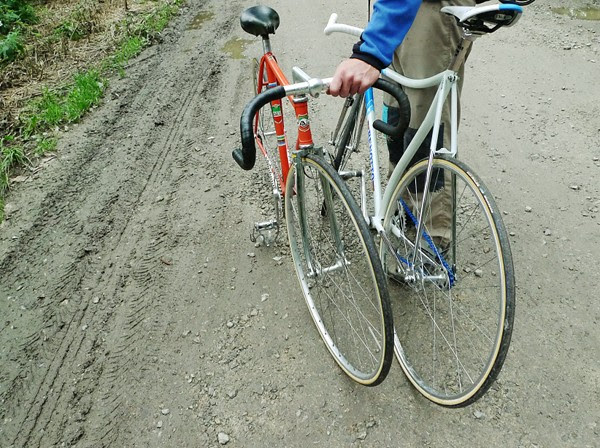 . I expected a bike with "track geometry" to be uncomfortable to ride. This bicycle was extremely comfortable, but I am not sure to what extent it is bike-specific - maybe it is just extremely well built. Even the 23mm tubular tires felt fine - including off road!

. The only aspect of the bike that began to bother me after a while, were the handlebars - the track-style drop bars don't have sufficient "shoulders" for me to place my hands the way I like. 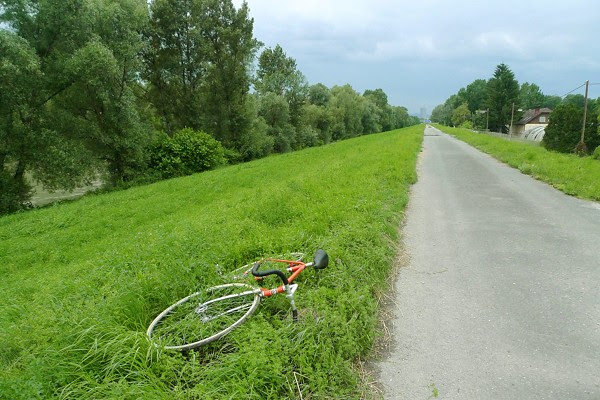 I am not sure whether my feedback is typical or not. But that was my experience, and I absolutely loved it. It was especially wonderful to actually go exploring on this bike. I still have a hard time believing I did it. 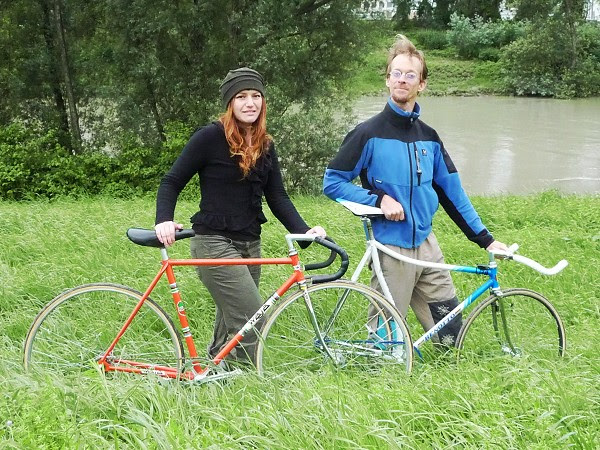 A big Thank You to Wolfgang again for this experience. (And in case you are wondering, he is riding a Benotto time trial bike.) 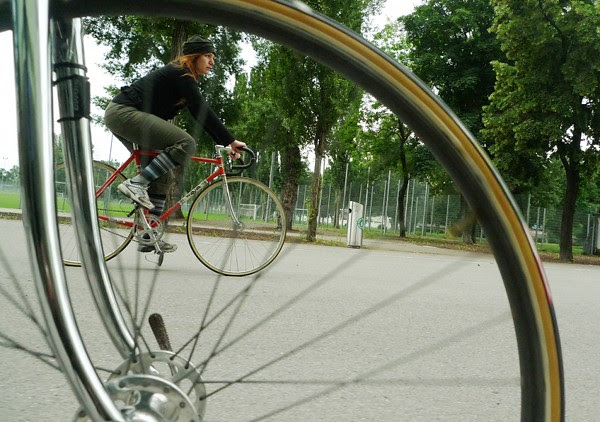 I think that the popularity of fixed gear culture today has given us a lot of misconceptions about what riding a track bike is actually like. It was completely different from what I had expected, it wasn't difficult, and most importantly, it was enjoyable. The trackbike now (temporarily) lives with me, and I have been practicing riding it after work on the Danube Canal bike path and in the Prater park. 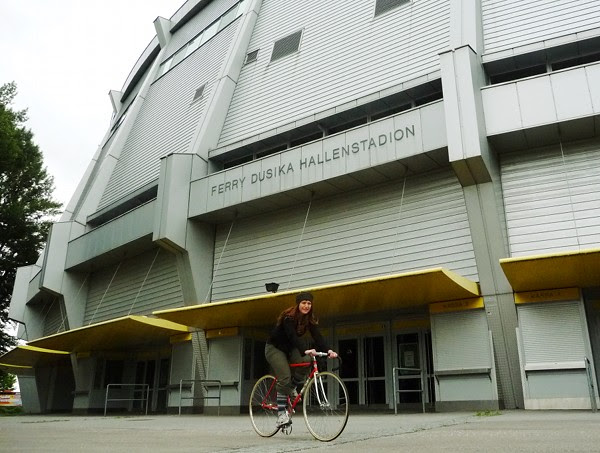 Could the crazy dream of the velodrome be not so crazy after all?
Labels: bike friends fixed gear roadcycling technique trails Vienna vintage