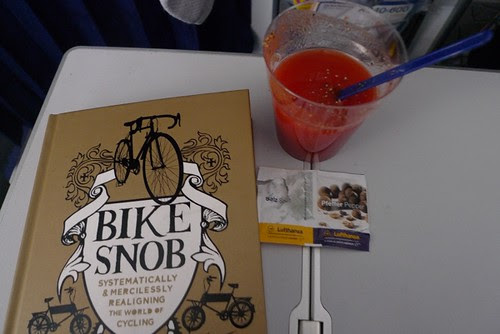 Leaving for Austria again, I bought the new Bike Snob book to read on the plane in hopes of distracting myself from my terror of flying. I like the BikeSnobNYC blog, but what made me buy the book was Grant Petersen's review on Rivendell's website. I have to admit that I am a sucker for Grant Petersen's writing and find myself reading all sorts of things he wrote that I have no interest in, just for the narration. If he wrote a 2-page description of bathroom tiles, I'd probably read it. His enticing endorsement of the book put me over the edge.

And if this isn't proof of the existence of the Collective Unconscious, I don't know what is: No sooner did I stuff Bike Snob into my carry-on, then mention of me appeared on his blog. Scroll down to the bit about the Boston Globe story on sweat stains and fabrics with patterns. Right...

Bike Snob proved useful during my flight, as I was seated between two mothers with babies on their laps. The babies not only wailed for the duration of the flight, but now and again would reach out to pull my hair, poke my eye, or chew on my jacket. Noticing this, the mothers would smile at me generously - as if to say: "As a female of childbearing age, surely you must be delighted at the opportunity to interact with babies!" Trying not to start wailing myself, I took deep breaths and concentrated on Bike Snob.

If I had to use one word to describe the book it would be "heartwarming". It is gently humorous, and reading it feels like wrapping yourself in a warm and fuzzy sweater with cute little patterns of bicycles all over it. Though Bike Snob argues that there is no such thing as "bike culture," he contradicts himself by creating a sense of one - to the extent of even referring to cyclists as a distinct breed of people. He also contradicts himself by railing against the fetishisation of the cycling experience, only to go on and fetishise the heck out of it himself in later chapters. I am pretty certain that these contradictions are intentional, meant to illustrate his own hopeless love for bicycles and to demonstrate that he too is susceptible to the very things he mocks.

As for the contents, they are surprisingly straightforward. The chapters address such topics as bicycle history, bicycle ownership, bicycle maintenance, and road rules. There is also a part on "Velo-Taxonomy" where he categorises cyclists into various types and explains the differences in detail. According to his taxonomy, I would be a hybrid between the "Retrogrouch", the "Lone Wolf", and the "Beautiful Godzilla" (though the only thing in common I have with the latter is the type of bicycle I ride).

The Bike Snob book is generously illustrated, in a manner that evokes Kurt Vonnegut's Breakfast of Champions and Antoine de Saint-Exupéry's The Little Prince. The design and layout make the pages almost seem edible. In a way, the presentation can be described as having a pre-packaged "cult status feel." Whether the book will actually attain cult status, only time will determine. 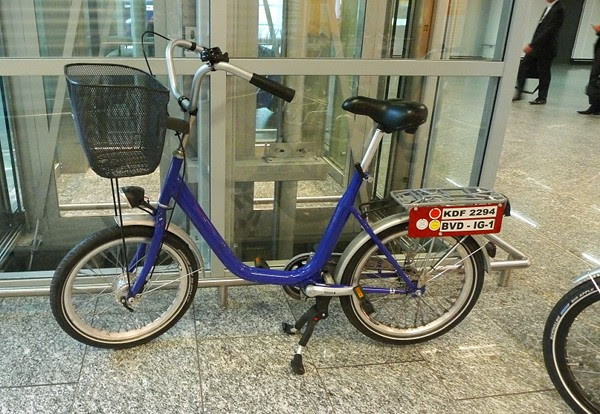 In other velo-news I can report from my travels, I saw these neat bicycles during my layover in Frankfurt Airport. These bikes have fenders, dynamo hub lighting, a the double-legged kickstand, a bell, a Basil front basket, a Pletscher rear rack, Schwalbe tires, and what appear to be license plates. From what I could tell, they are for the airport employees and not for flight passengers. Too bad, I would have liked to ride one around the airport!
Labels: books product reviews Vienna