Today I received an email from a reader asking for "tips on how to run a successful bicycle blog." I get this type of question every so often, and never quite know how to respond. For starters, what exactly is a "successful bicycle blog"?... One with a readership of over x visits per day? An average of y comments per post? Placement on "top 50 bicycle blog" lists? Mentions in local publications? Probably all of the above, plus other indicators I am not even aware of. 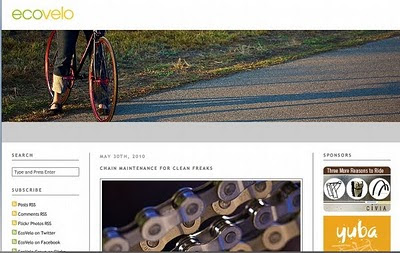 [EcoVelo - one of my favourite "successful bicycle blogs"]
The next thing that comes to mind when considering the question, is why would one want a "successful bicycle blog" - that is, what do they hope to get out of it? If one's heart fills with desire to write about bicycles, they can simply open their computer and start typing - using free and easy platforms like BlogSpot and WordPress if they wish to make the writing public. The act of turning to an "established blogger" (reader's phraseology) for advice suggests that there is a specific end-goal in mind. I suppose the goal can include sponsorships, effective advocacy, and personal fame... but I think that such a goal-oriented attitude at the start is counterproductive. 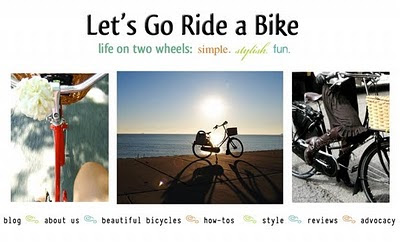 [Let's Go Ride a Bike - one of my favourite "successful bicycle blogs"]
The main thing I would suggest, is to start the blog only if you have a genuine interest in the topic - an interest that is sufficiently strong, so that you can imagine producing hundreds of posts, day after day, with the same degree of enthusiasm as your first. Because the most important aspect of a blog's "success," from what I have seen, is its sustainability. Even though it may seem like there are tons of bicycle blogs out there, the number is actually not that great if you narrow it down to those that have been around for at least a year and continuously generate new content on a close-to-daily basis.

I would also consider how much of your time writing a blog would take, and whether that time investment would be worth it for the end-goal you have in mind. I am an unusually fast writer and constantly write anyway as part of my work. A blog entry every one to three days is possible, in terms of both time and effort. Otherwise, I absolutely would not be able to do it. 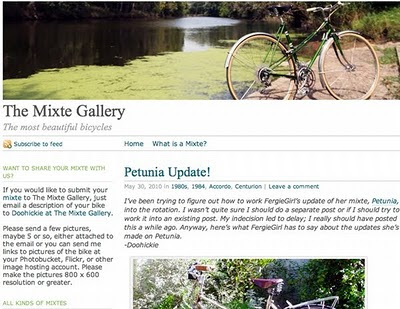 [The Mixte Gallery - bicycle blog with a unique theme]
Finally, I would suggest considering whether your bicycle blog will be sufficiently unique so as to differentiate it from all the others out there. The uniqueness can be a result of a specific focus (The Mixte Gallery is all about mixtes), of a distinct tone of voice (BikeSnobNYC's comic crankiness), of a consistent visual theme (the women on Copenhagen Cycle Chic), of being a source of cycling news in your area (the regional focus of Boston Biker), or of many other factors - but there must be something that will make the blog stand out in some way. 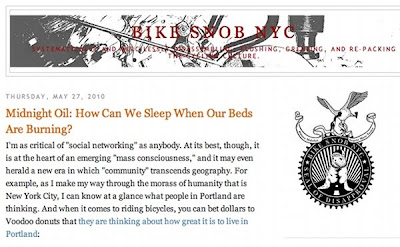 [BikeSnobNYC - one of my favourite "successful bicycle blogs"]
As for attracting readers, advertisers, sponsors, journalists and what have you... I feel that having this as your goal from the start could very well undermine it. It is my belief that readers can sense it when the ultimate purpose of a piece of writing is marketing-driven, and are less likely to connect with such writing.  I could be wrong, but I think that most "successful bicycle blogs" happened not by design but organically: The writer is so taken with the topic, that they keep writing and writing - until people begin to read. The best thing to do is simply to write and not think about "success" - whatever that may mean to you.
Labels: blog development social commentary